Biden calls for a national mask mandate to fight COVID-19

A passenger was kicked off a Frontier flight from Cincinnati to Tampa on Thursday for refusing to wear a mask.

In footage of the incident, the woman is seen being approached by a flight attendant who noticed she was not complying with the airline’s mask policy — but things escalated when the woman refused and shouted an expletive at her.

COUPLE WITH CORONAVIRUS ARRESTED FOR BOARDING FLIGHT TO HAWAII

“Ma'am you need to have a mask on. You need to have the paper mask they provided,” a flight attendant is seen telling a passenger in a video obtained by Fox News on Friday.

The reluctant traveler appeared to try and ignore the flight attendant's instructions. 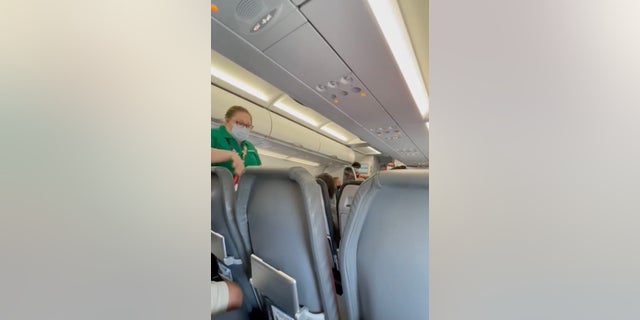 A flight attendant (left) can be seen asking the seated passenger to comply with the airline’s mask policy. (Kelsi Harris)

“Ma’am, I’m speaking to you. Ma’am?" the flight attendant continued. "You have to wear your mask the whole entire flight. If you’re unable to do so you will be removed from the flight."

As the flight attendant turns to walk away, the woman can be heard remarking, "Thanks, a–h—-."

“OK, you’re done. Let’s go,” the flight attendant responds. “You’re getting off the aircraft. You’re done, you’re not going to speak to me like that. You have to comply. You agreed to this when you checked into our flight and when you bought your ticket so I need you to get off the aircraft at this time."

COUPLE WITH CORONAVIRUS ARRESTED FOR BOARDING FLIGHT TO HAWAII

A second video shows a security guard arrive to remove the woman and her luggage. On her way out of the aircraft, the passenger still refused to wear her mask while passing by her fellow travelers.

Several of those passengers erupted in applause when the woman was finally ushered out of the aircraft. Someone can also be heard calling her a "Karen."

It’s unclear whether the ejected passenger faced any repercussions, such as a ban, following the incident, nor whether her actions resulted in any delays. Frontier Airlines did not immediately return a Fox News request for comment. 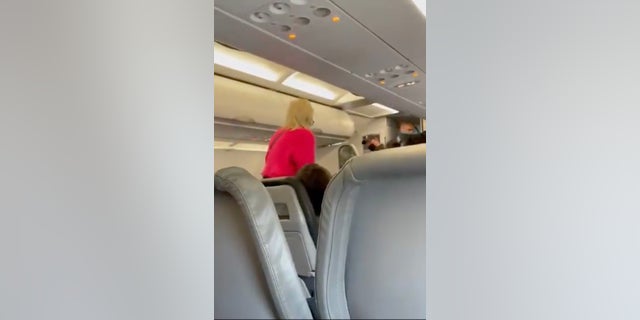 Passengers were heard cheering, and one called her "Karen," as she was escorted from the aircraft. (Kelsi Harris)

"This level of protection is important for everyone’s well-being and if you don’t wear an approved face covering, you may lose future travel privileges on Frontier," the site states.