No bellboys to assist with his executive luggage, checking in by phone and sinks with no plugs: Etiquette expert William Hanson is baffled at an uber-trendy hotel for millennials in NYC

Opened in 2017, Public hotel in New York sits on the site of a former car park. It has 364 guest rooms, three penthouses, two bars and one restaurant.

What it does not have is the traditional hotel vibe.

This is a hotel for a new type of guest. 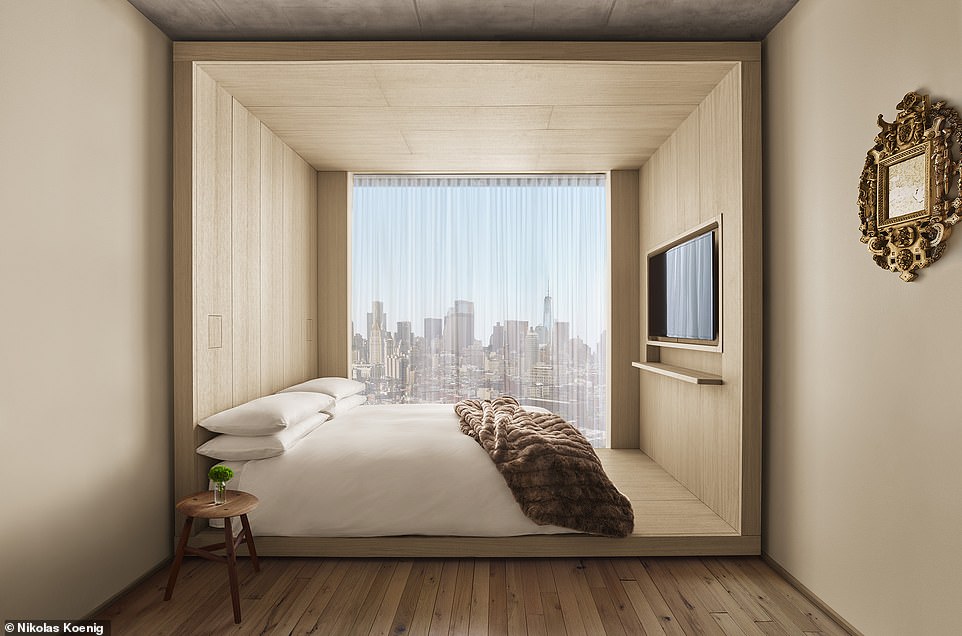 When William arrives at Public, he is alarmed that no one rushes forward to assist him with his luggage. Pictured is a queen room at the hotel, which is the cheapest 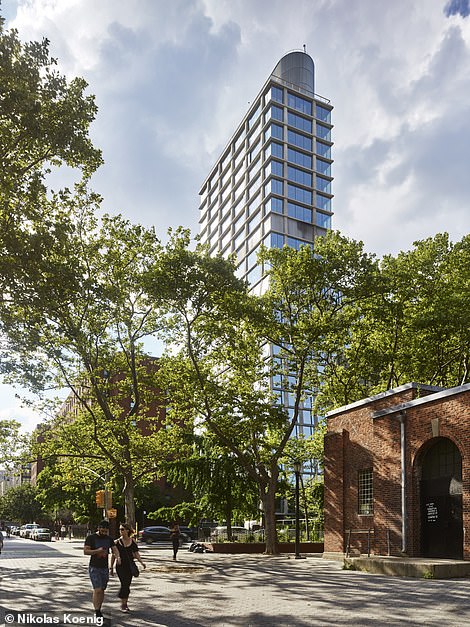 Opened in 2017, Public hotel in New York sits on the site of a former car park

This hotel is after the millennial generation – and, clearly, it is succeeding. Upon arrival you are not greeted by any porter, bellhop or doorman. Instead, centre stage, are two custom-designed escalators encased in hot rolled steel and reflective copper-coloured Japanese stainless steel: hello, Instagram!

A quick search of the tagged photos on Public’s Insta reveals many guests see the moving staircases not as a way to rise or descend from one floor to another, but instead an excuse to post content.

Arriving with my large set of matching executive luggage with genuine leather embellishments and initials it was somewhat alarming not to have anyone rush forward to assist. No wonder, as no one does this job. The only thing that comes close to a concierge desk is on the second floor, at the back, with no sightline to the entrance. Just as well I was able to handsomely tip my driver to assist. Had I been a little old lady arriving, what would I have done?

That said, this hotel is not aiming for little old ladies. Which is just as well.

A further nod to the shy millennial generation, which recoils from actual human contact, is the check-in procedure. 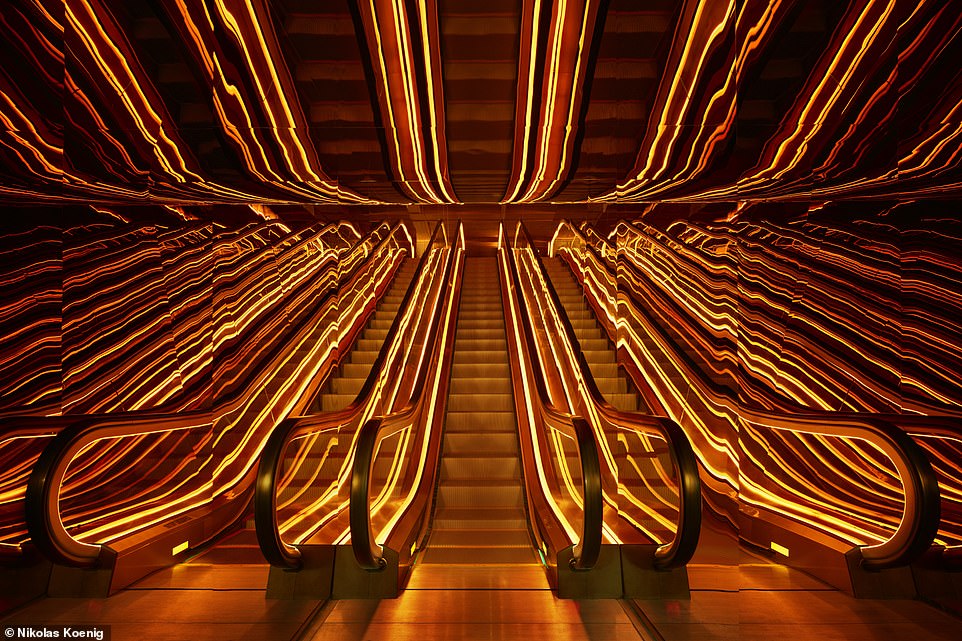 At the entrance, centre stage, are two custom-designed escalators encased in hot rolled steel and reflective copper-coloured Japanese stainless steel. This is an Instagram hotspot for guests 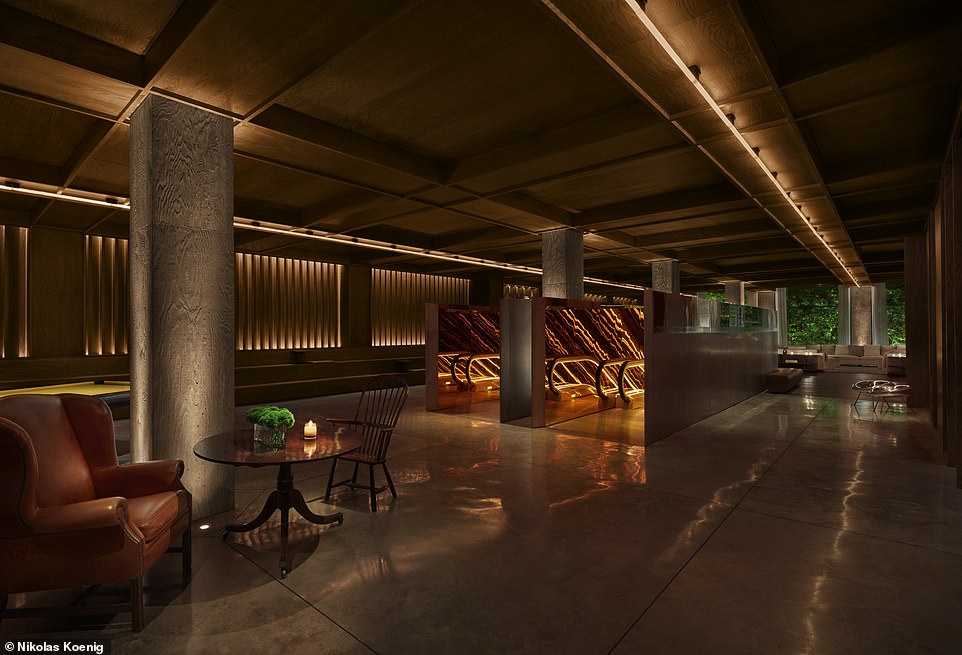 ‘This hotel is after the millennial generation,’ writes William, ‘and, clearly, it is succeeding’

A bit like with a flight, guests are emailed 24 hours before arrival to check-in online via their phone. (Tip: don’t attempt to check in via your computer as the interface doesn’t respond as easily as on your mobile device.)

Once check-in is completed a QR code is issued. Hang on to this as you have to scan it upon arrival next to one of the reception iPads to confirm your presence and get your room key – which you programme yourself.

So far into my stay, I was yet to talk to anyone.

My king great view room (220 square feet) was the largest size available of their regular room categories. For just me, it was a good size. It’s not a hotel room in which you would linger – but then again in New York City, why do you need to spend much time in your room? 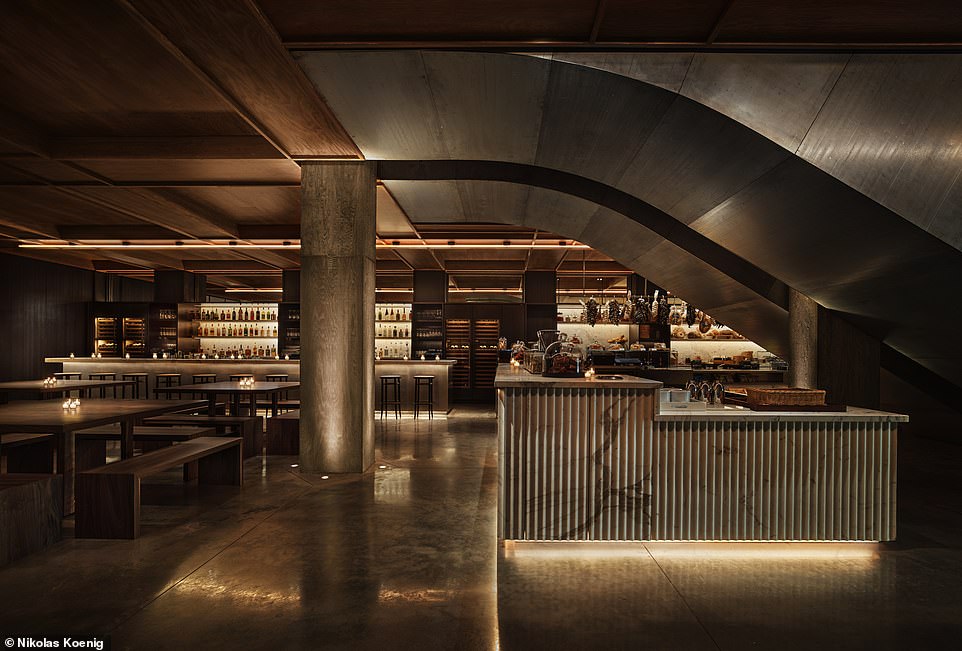 A bit like with a flight, guests are emailed 24 hours before arrival to check-in online via their phone, writes William 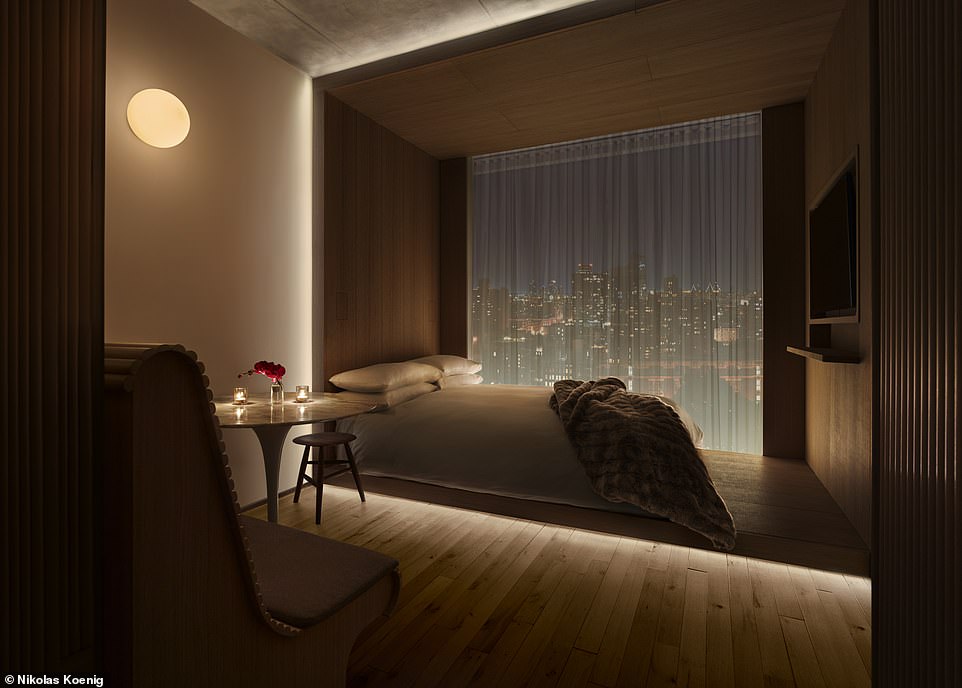 William stayed in a ‘king’ room (pictured), which featured a basin with no plug, 12 USB points and lots of shelves and baskets

Interestingly, there was no plug for the basin. Because, of course, millennials don’t run basins of water – they just lecture others about saving the oceans while wasting heavens knows how much every time they shave or wash their hands, mindlessly depriving the dolphins.

The wardrobe had only five hangers but many shelves and baskets – T-shirts don’t need hangers and who wears suits and shirts anymore, eh?

Need a taxi? Dial one of the ‘Public advisors’ and they can request a Lyft for you.

There’s no spa but they do offer yoga classes and meditation on the roof terrace. There is a well-equipped gym, too. 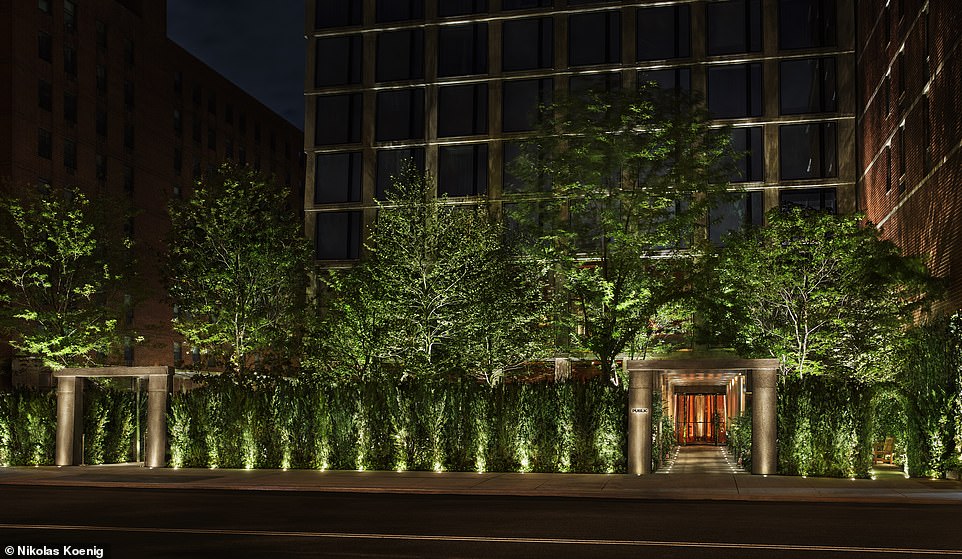 Pictured is the striking entrance to Public, which bids to make luxury ‘a democratic experience’ 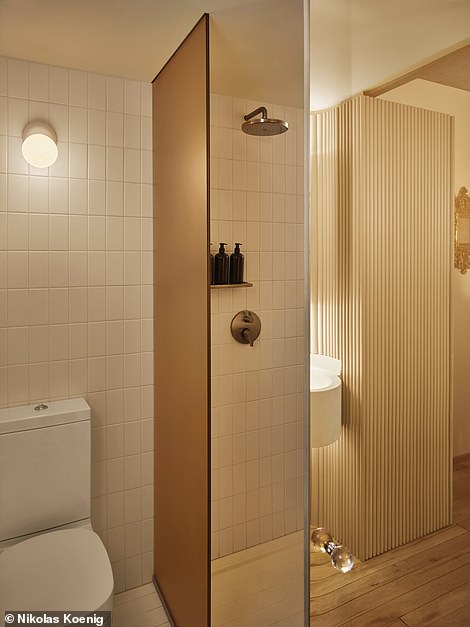 William says his room was not one he’d want to linger in – but, he asks, who wants to linger in a hotel room in New York?

Although USB points in guest rooms are now fairly standard in all hotels, at Public each room has 12. You can charge all your devices and gizmos at one time – providing you have 12 corresponding cables. The Wifi is reportedly the fastest in New York City.

Public knows who its market is and what they want.

Downstairs, you could not help but miss the modern business clientele, all beavering away on their MacBooks, collected around the four communal tables on bench seating. On my second day, I was seated next to a man who was desperately trying to ‘close the loop’ while trying not to be too ‘unsettled with the vibe’.

Although I am actually from the millennial generation, thankfully I don’t share many of its lesser traits. I had worked out fairly quickly that this hotel was not meant for the likes of me.

But that isn’t to say it’s bad. The hotel’s vision-maker, Ian Schrager, is clearly trying to evolve the hotel concept – and good on him and his team for trying.

For example, room service. Instead of levying a tray charge, on top of usually already hefty food prices, at Public you just dial 0 or order online, wait seven minutes and then head to the lobby to collect from a shelf. You can then eat this in your room or on the go.

For me I’d rather have my room service come with an army of cloches on a linen-covered trolley, with a hidden hotbox underneath, delivered by a nice boy called Stefan. But that is because I am not afraid of having to speak to other people… and a snob.

The price point for the rooms is much lower than in many of the competing hotels, with rooms starting from $200 (£150) per night (bed only).

Public’s mission statement is to make luxury a democratic experience. They say it is no longer a business classification or anything to do with price. 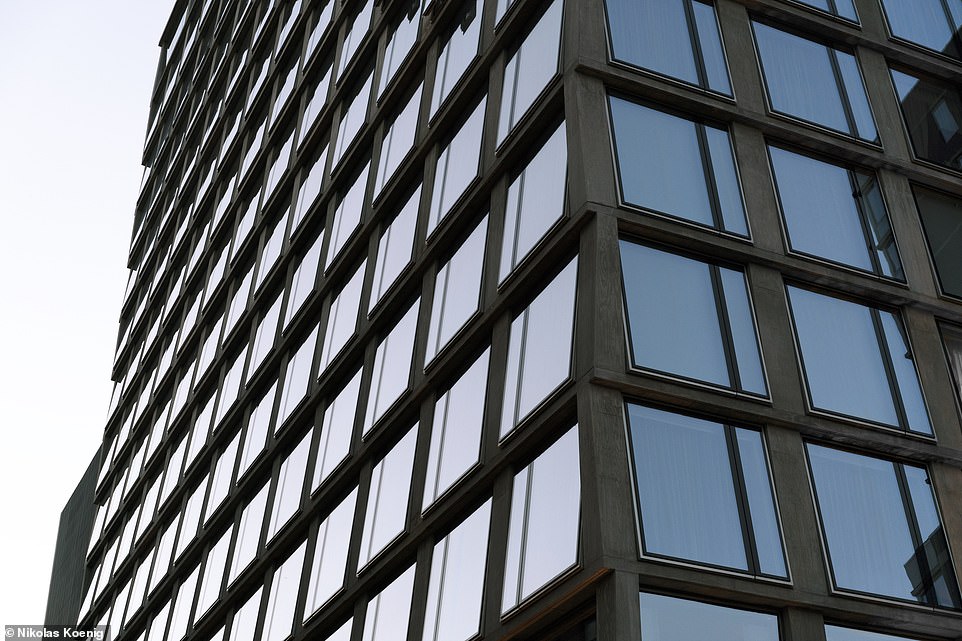 Inspiration: William says that he can see many of the hotel’s features and quirks being borrowed by conventional hotels

And I agree. The rooms are not eye-wateringly expensive like many hotels in the city; they are by no means cheap but for what you get they do offer good value for money.

Being a Brit who doesn’t like change, Public’s unapologetically American proletariat spirit was perhaps unsettling at first. Public is not actually offering badly thought out revolution, but instead rapid evolution of the standard hotel offering.

What Ian Schrager and his team have done will probably take a few years or so for the rest of the world to understand, adapt and like, but I can see many of the hotel’s features and quirks being borrowed by more conventional hotels in order to survive and snare the emerging, human-interaction-shy, generations coming through.

British Airways and American Airlines offer up to 70 flights a day from London to the USA as part of their Atlantic Joint Business. Fares from £239 return, including taxes/fees/carrier charges.

Related posts:
03/24/2019 Travel Comments Off on William Hanson reviews Public, a trendy hotel for millennials in NYC
Recent Posts
We and our partners use cookies on this site to improve our service, perform analytics, personalize advertising, measure advertising performance, and remember website preferences.Ok