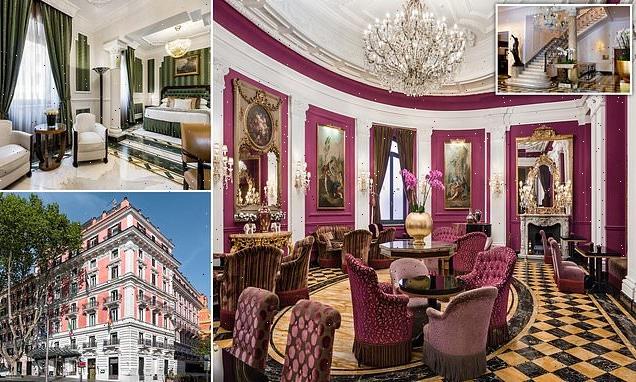 When in Rome… stay in the five-star marble-clad hotel Lady Gaga lived in for three months while filming House of Gucci (and you don’t need to book her £7.8k-a-night room to enjoy it)

When in Rome, stay at the five-star Hotel Regina. I did, and it was a joy.

‘Would you like the same table you had yesterday, Mr. Reid?’ the hotel’s breakfast host asked on my second day, artfully remembering both my name and where I had sat the previous morning. This flattering attention to detail was, I am sure, part of the hotel’s training regime.

And it worked. I’ve stayed in plenty of large upscale hotels, but not all of them ask staff to memorise their guests’ names and seating preferences. (The hotel has 127 rooms.) It’s not deference – it’s taking the trouble to care. 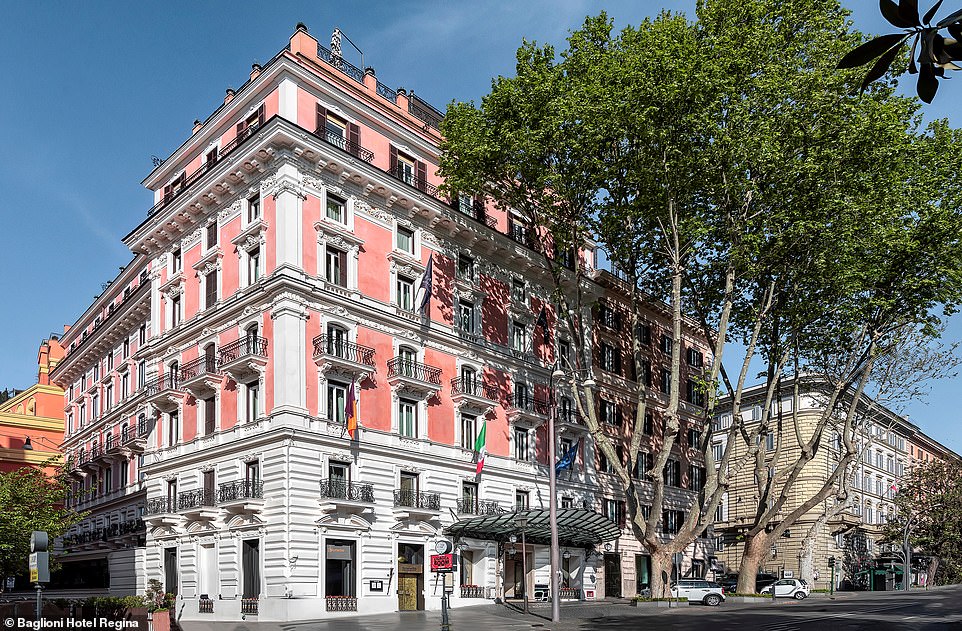 Carlton Reid checked into the Baglioni Hotel Regina, pictured above, a prestigious five-star hotel that lies on Rome’s fashionable Via Veneto 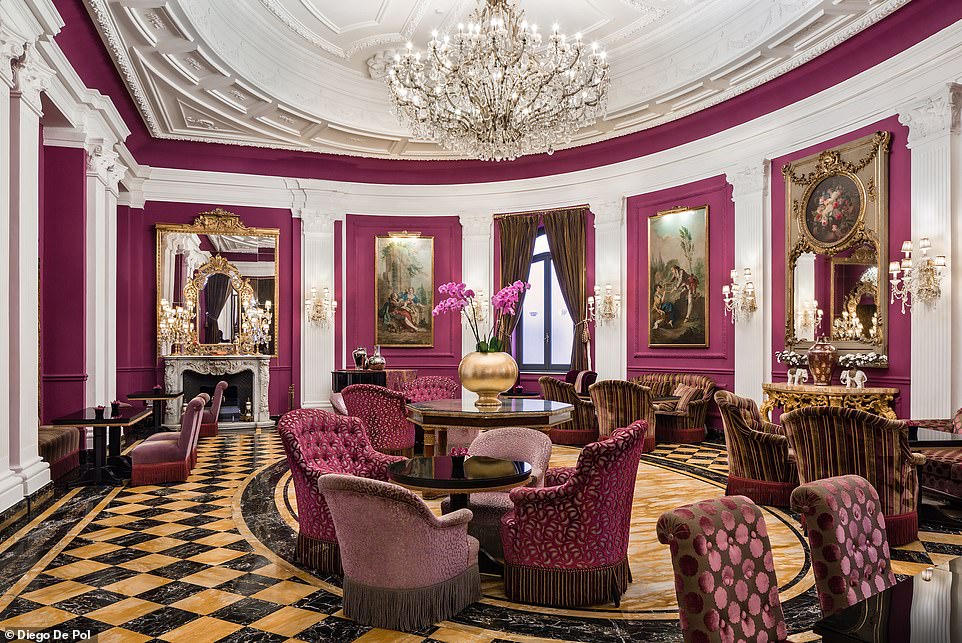 ‘When in Rome, stay at the five-star Hotel Regina. I did, and it was a joy,’ remarks Carlton. Above is the hotel’s Caffe Baglioni dining space

The Regina is wall-to-wall Sienna marble, but so are many of Rome’s top hotels. It’s the people that make the real difference, and because of that care from the breakfast host and other staffers – who go out of their way to be helpful and pleasant – I’m far more likely to remember and recommend the Regina.

It’s one of Rome’s most prestigious five-star hotels, several of which can be found close to each other on the fashionable Via Veneto.

From the hotel, it’s just a ten-minute walk west to the Spanish Steps and, to the north, it’s an even shorter walk to the beautiful gardens of the Villa Borghese.

With no grand views, except from the swish rooftop suite, the Regina, owned by the Baglioni group of luxury hotels, has to stand out in other ways and stand out it does.

I arrived on a folding bicycle. This didn’t faze the blue-suited doorman.

He helped carry my bike bags into the marbled lobby and, as I was too early to check in, he directed for the bike to be stored on a luggage cart until it could be delivered to my room later.

The cart was wheeled beneath a bronze statue of a gladiator, just one of the artworks in the opulent lobby. 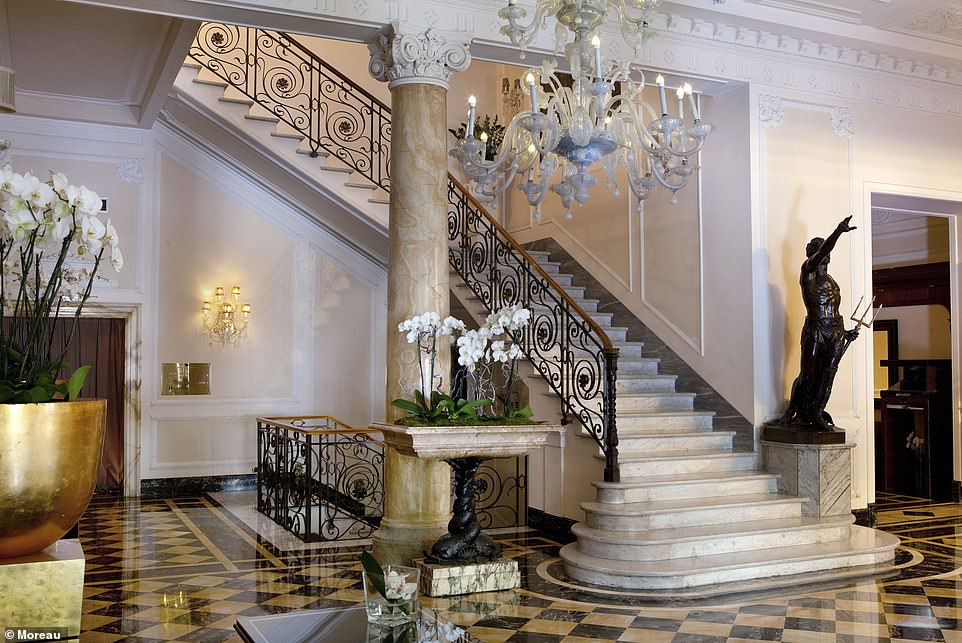 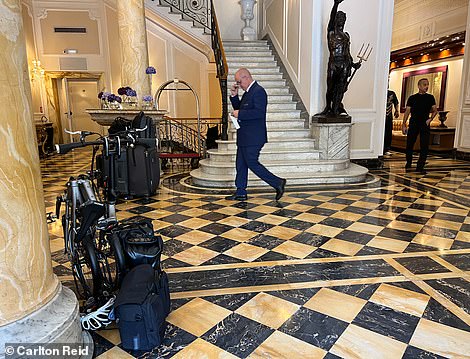 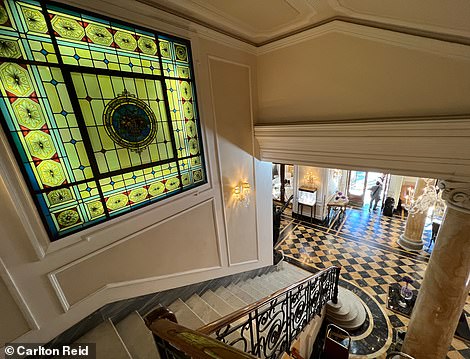 Carlton arrived at Hotel Regina on a folding bicycle (left). ‘This didn’t faze the blue-suited doorman,’ he says. Pictured on the right is Carlton’s view from Hotel Regina’s white marble staircase 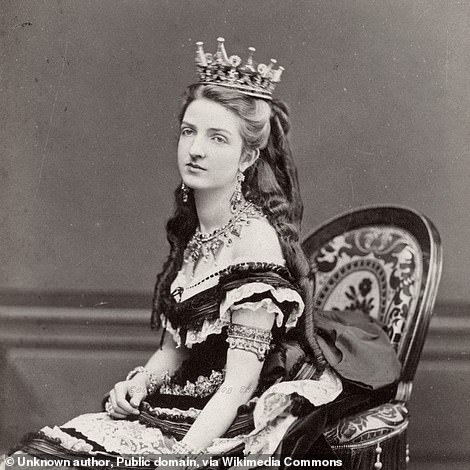 Italy’s Queen Margherita, pictured above in the 1870s, lived in the hotel immediately after the assassination of her husband, King Umberto I

Studded with stuccos and a sweeping white marble staircase lit by Venetian glass chandeliers, this Art Deco entrance is fit for royals.

No surprise, then, that one of its first guests when it opened in 1904 was Italy’s Queen Margherita, who lived in the hotel immediately after the assassination of her husband, King Umberto I. The retired monarch, for whom the Margherita pizza is named, stayed for the best part of two years, awaiting the renovation of her royal residence next door.

First known as the Liberty Hotel, the name was changed to Regina – Italian for ‘queen’ – soon after the former queen moved into Palazzo Margherita (the palace is now part of the tightly-guarded American Embassy, opposite the hotel.)

Hollywood royalty recently lived in Hotel Regina. While filming the ‘House of Gucci’ movie, Lady Gaga stayed in the hotel’s top-floor Roman Penthouse suite for three luxurious months. (I presume the producers negotiated a long-stay discount – the suite, with 360-degree views over the Eternal City, costs £7,800/$8,800 per night.) 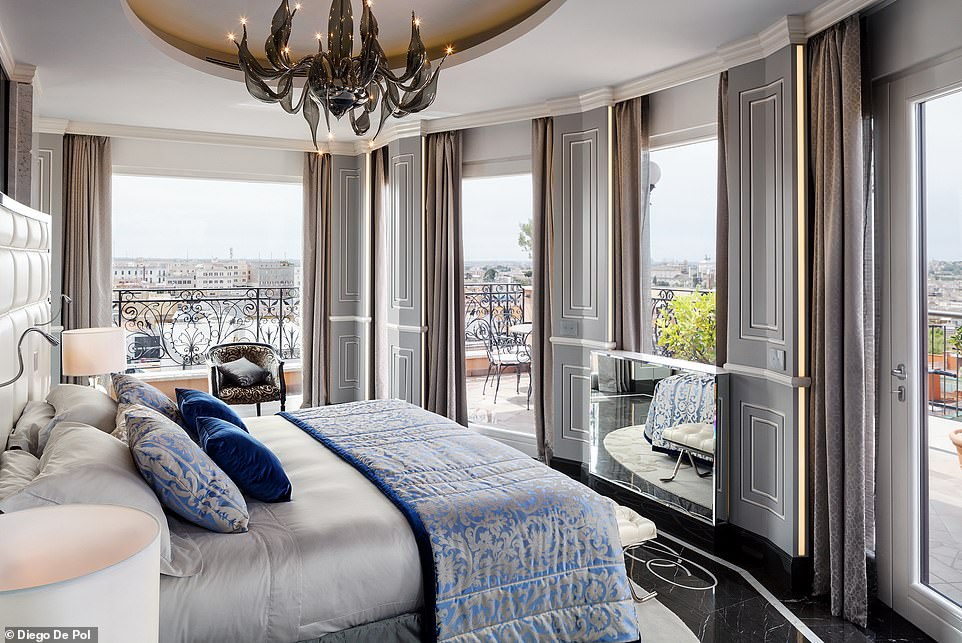 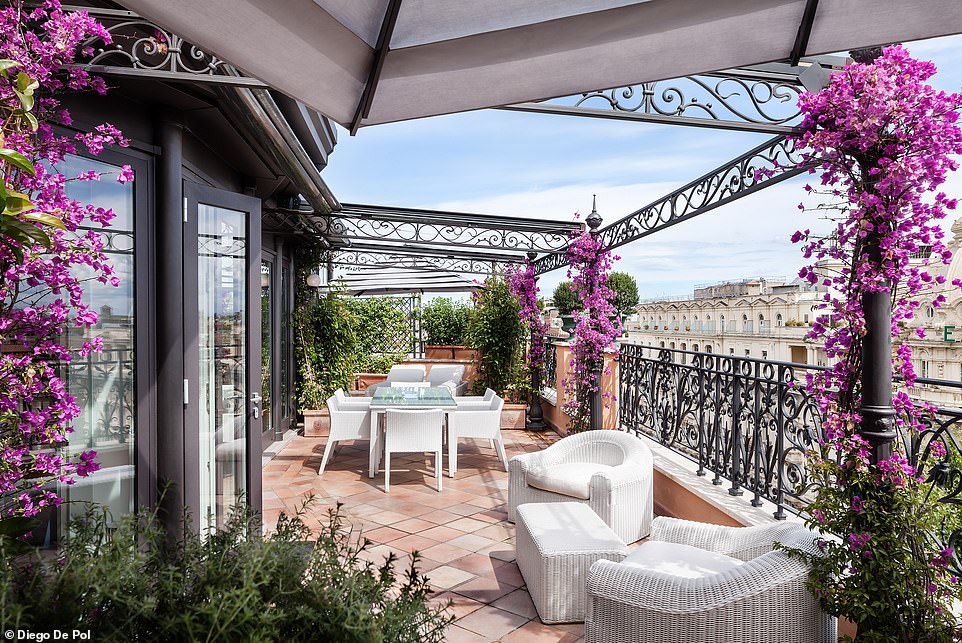 The Roman Penthouse suite, with 360-degree views over the Eternal City, costs £7,800 per night 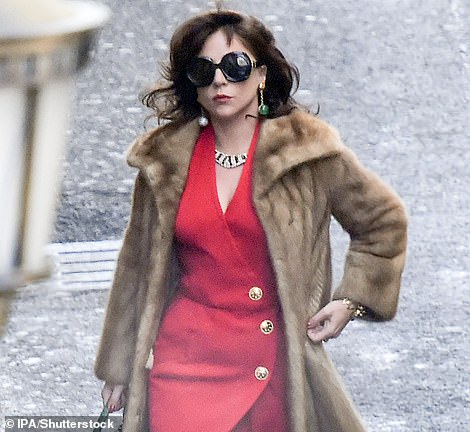 Despite having no blue blood whatsoever, I was treated royally by the hotel’s staff.

The receptionist ushered me into the salon-style dining room, where breakfast was still being served.

I was seated in a low padded armchair and served tea and cake.

I arrived early to determine whether I might get a pre-noon check-in.

I hadn’t slept because I had arrived in Rome after midnight to take sunrise photographs of the ancient Appian way, the oldest and perhaps grandest of Roman roads.

An early check-in was duly arranged and, to recharge before sightseeing, I closed my room’s reassuringly heavy curtains and slept like a baby for a few hours. 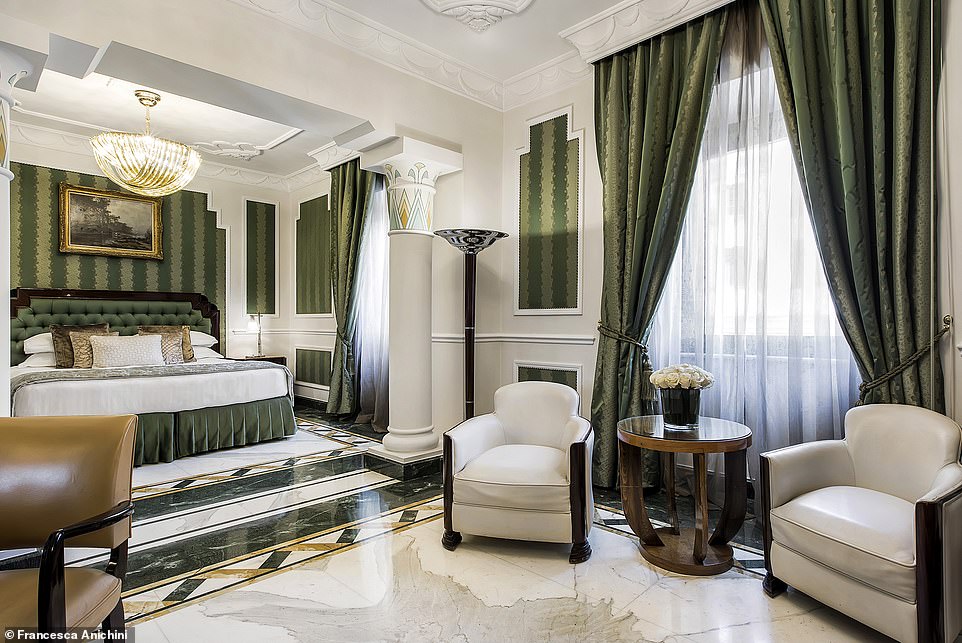 Carlton says that he ‘slept like a baby’ in his Junior Suite (pictured above), which boasted ‘reassuringly heavy curtains’ 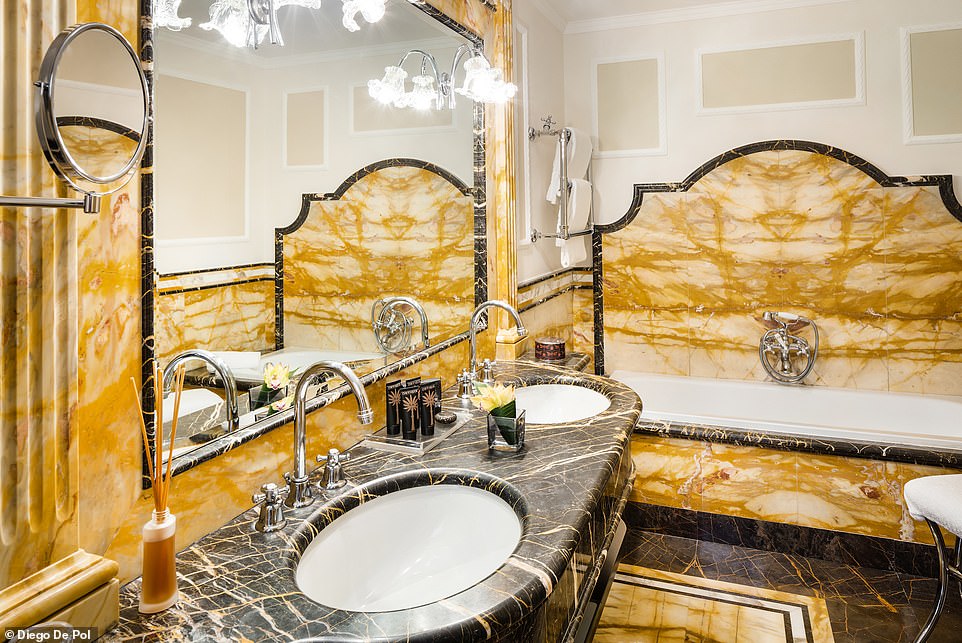 Pictured is the bathroom in the hotel’s Ludovisi Suite. ‘The Regina is wall-to-wall Sienna marble,’ says Carlton

The Regina is on a tight bend of the fashionable Via Veneto. This is one of modern Rome’s most iconic highways, celebrated in the 1950s for being the hub of la dolce vita (‘the sweet life’).

The rich and famous would spill from the street’s bars and restaurants as immortalised in Federico Fellini’s seductive 1960 film ‘La Dolce Vita’, in which tabloid journalist and would-be novelist Marcello Rubini sought out high-society gossip and starlet scandals in a succession of smoke-filled drinking dens and night clubs (this arthouse film gave the world the word ‘paparazzi’ coined from the character Paparazzo, a pushy news photographer).

The restaurants on Via Veneto remain a draw, including the Hotel Regina’s chic Brunello Bar and Restaurant, which is a favourite with locals. 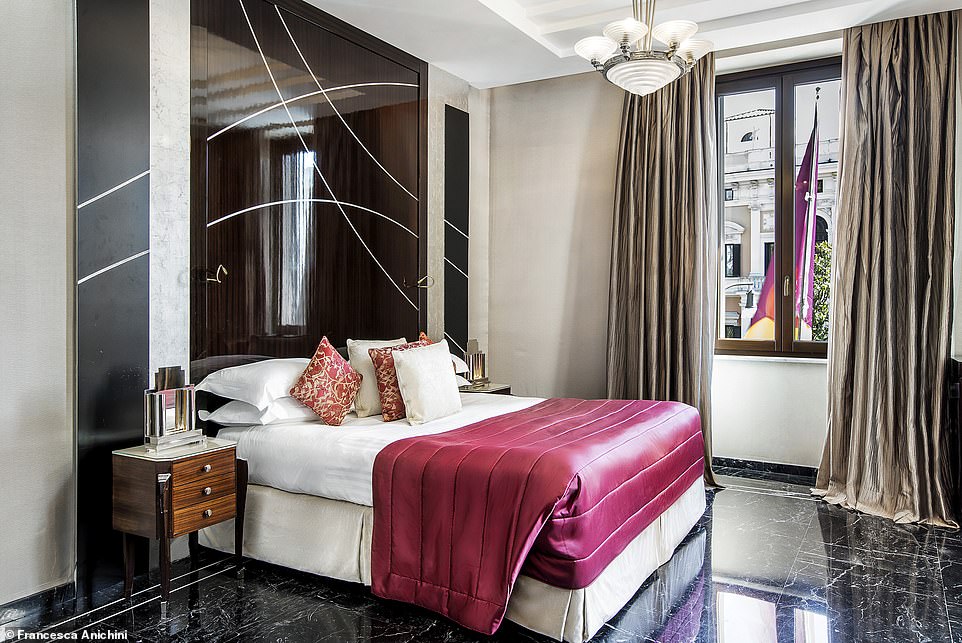 The area around the hotel was celebrated in the 1950s for being the hub of la dolce vita (‘the sweet life’). Above is the Dolce Vita Suite 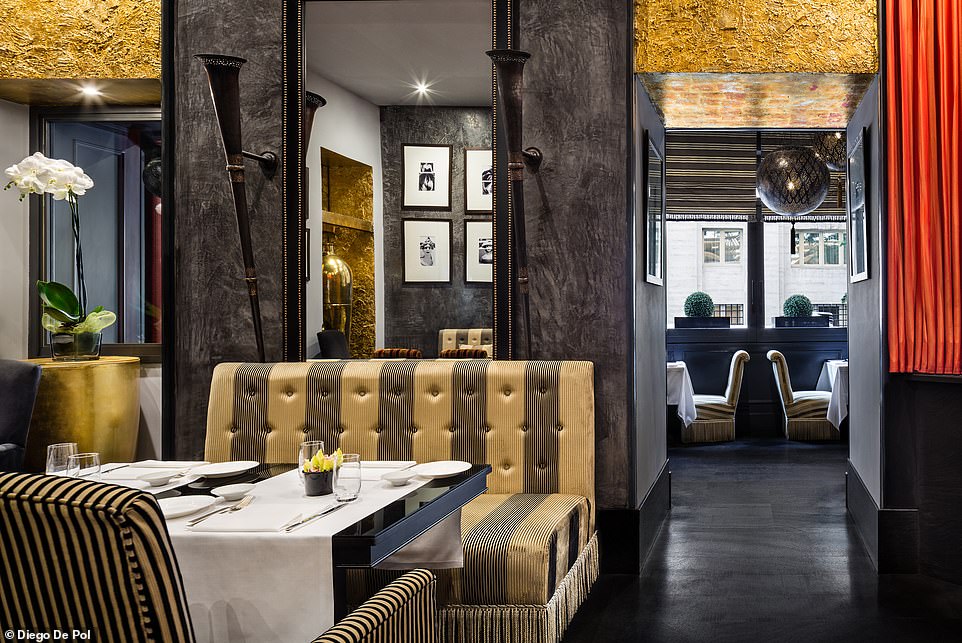 Hotel Regina’s chic Brunello Bar and Restaurant, pictured above, is a favourite with locals 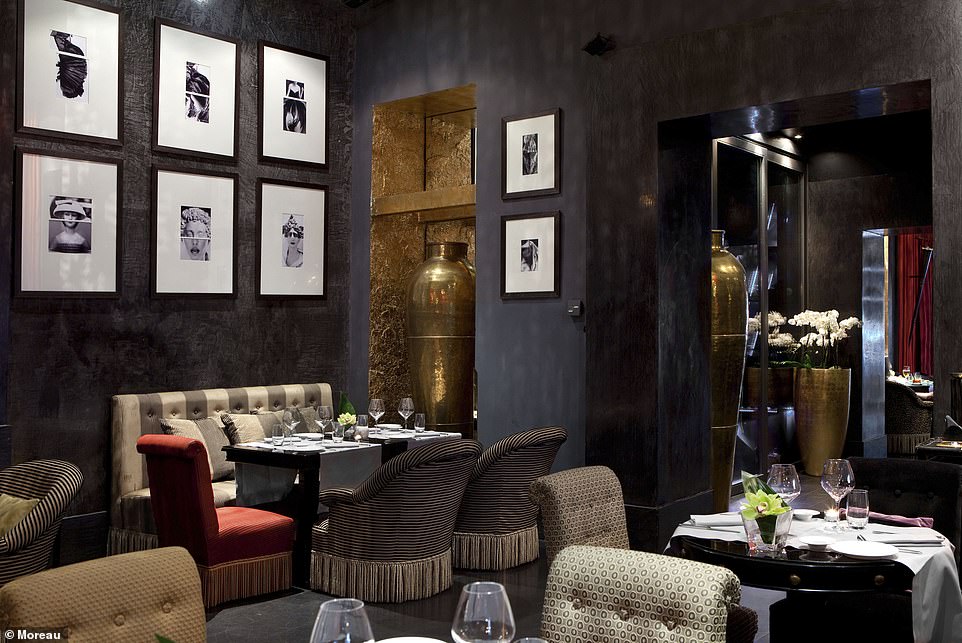 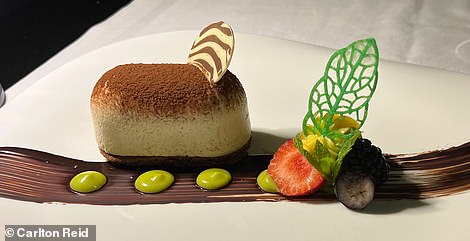 Dotted with Arabian Nights-style brass lamps, the restaurant’s gold and black décor contrasts with the royal salon feel of the rest of the hotel.

Brunello’s is an evening destination; breakfast is served in the salon-style dining room where you’re looked after royally by those well-trained and wonderfully attentive hosts.

Baglioni Hotel Regina is within walking distance of the Trevi Fountain and the Spanish Steps and close to Rome’s posh shopping streets. Double rooms start at £270 per night with a junior suite costing three times that.

Luxe hotel group Baglioni has upscale properties in London, Venice, the Maldives and Sardinia, many of them in buildings of historical, cultural, or artistic merit. The 127-room Hotel Regina is the group’s Roman flagship.

PROS: Beautiful rooms throughout, a dream if you love marble and Art Deco with everything. The staff are wonderfully attentive and friendly. The (pricey) suites have balconies and the best views.

CONS: Some folks may find the opulence OTT and perhaps even cloying. The hotel’s website majors on the exclusive and expensive Roman Penthouse suite, which suggests that many of the rooms feature drop-dead-gorgeous 360-degree views of Rome. My junior suite was luxurious, the view from the window was merely to the street below.

Carlton Reid travelled to Rome with a Tern folding bike and an Interrail pass. The iconic pass celebrates its 50th anniversary this year. Launched in March 1972, the Interrail pass was originally for young travellers only, enabling those of up to 21 years of age to explore 21 countries by train with just one rail pass. Since 1998 the Interrail pass has been available for travellers of all ages. More than 10million travellers have enjoyed ‘interrailing’ across Europe. For more information, visit eurail.com.