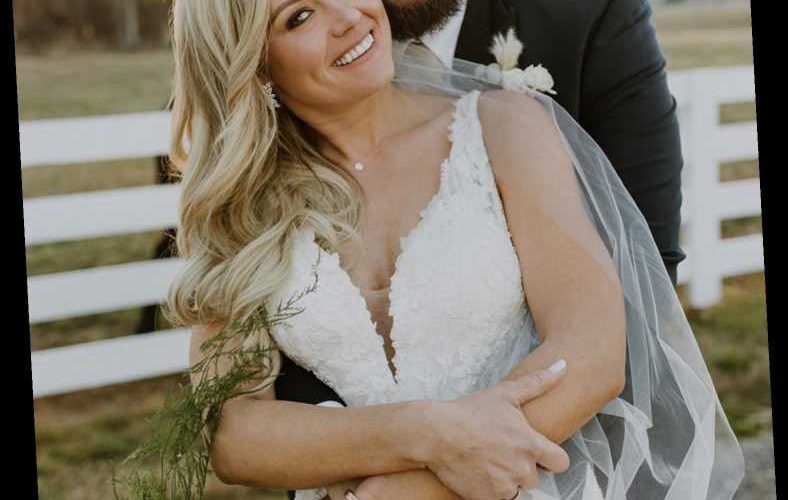 The singer — who won season 17 of the NBC singing competition series with coach Kelly Clarkson in 2019 — and Hoyt, both 32, tied the knot at Saddle Woods Farm in Murfreesboro, Tennessee, on Sunday, March 7.

Hoyt, a labor and delivery nurse who also runs the nonprofit The Radiant Initiative, tells PEOPLE that Saddle Woods was her "dream venue." Her close friend Jacelyn, the owner of Crown and Veil Design, did all of the decor and brought the wedding to life.

Ahead of the ceremony, Hoyt and Hoot prayed together. Then to kick things off, the couple had their friend Brian Nhira lead worship to "bring the focus back to the faithfulness of the Lord."

The couple says it was "very important" to them that they wrote their own vows to each other. In addition, they each wrote vows to Hoot's 5-year-old daughter Macy (whom he shares with ex-wife Jessica Lynn Steele). Hoot also sang a song he co-wrote with Kyndon Oakes, Renn and Lee Turner for Hoyt called "Hallelujah" during his vows.

"I got very emotional reading my vows to both Brittney and Macy and then singing a song to my soon-to-be wife talking about my journey with her," Hoot says. During communion, Hoyt's sister Briley and brother Joseph sang NewSong's "When God Made You," which was the song Hoot and Hoyt sang when they first met eight years ago as wedding singers at their best friend's wedding. (Though they lost touch after the wedding, they reconnected while doing mission trips in Nicaragua; In September, they got engaged.) For the big day, Ariat outfitted and provided matching boots to Hoot and all of his groomsmen. Adrianna Papell provided all of Hoyt's dresses for the pre-wedding festivities.

Hoyt accessorized with her engagement ring, which features an oval-shaped diamond from a family friend, Gizelle Zohar. Hoot's ring, meanwhile, was handed down from his late grandfather. After the ceremony, the couple hosted a reception with catered barbecue from Mission Catering, whose owner they've gone on several mission trips with. For the rehearsal dinner, they had a traditional Italian meal with pasta and salad from The Bull and Thistle in Gainesboro, Tennessee.

Hoot's sister Katie homemade the desserts for the wedding, and the couple kept the drinks "simple" by having their favorite wine on-hand from Shatel Wines. For their first dance as a married couple, Hoot surprised Hoyt with yet another song he co-wrote for her with Marty and Misha Goetz called "And Then Suddenly." The song was inspired by a journal Hoyt gifted him of letters she had been writing to her husband for more than a decade.

"I wept like a baby when he surprised me with the song 'And Then Suddenly' for our first dance," Hoyt says. And the surprises didn't stop there. Before the garter toss, Hoot and his groomsmen did a dance that they had secretly prepared for Hoyt.

"During the dance, Jake's pants ripped from top to bottom!" Hoyt says. "That made for a lot of laughter."

Two days after their wedding, Hoot and Hoyt jetted off to the Secrets resort in Cancún, Mexico, for their honeymoon. "We are so thankful we stayed around Nashville the first couple of nights to get rested up before coming to paradise here in Cancún," the couple says. 03/12/2021 Travel Comments Off on The Voice Winner Jake Hoot Marries Brittney Hoyt: All the Details from Their 'Emotional' Tennessee Wedding
Recent Posts