This is the dramatic moment that an Emirates Boeing 777 made a ‘hard landing’ in heavy crosswinds – and was forced to take off again for another attempt.

The ‘go around’ took place at Newcastle Airport on Thursday and was captured on camera by aviation enthusiast Jonathan Winton, who described it as ‘completely unexpected’.

The 777, which was operating a service from Dubai, looked fairly stable as it made the approach in winds courtesy of Storm Diana – but the landing was far from smooth. 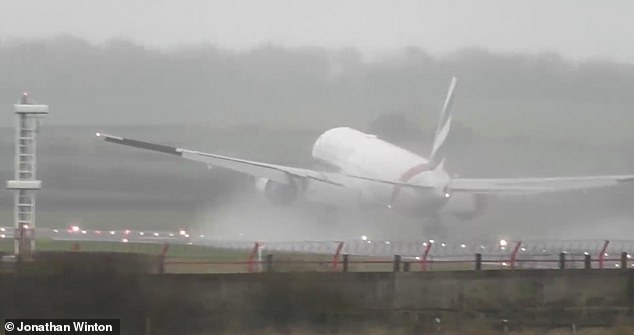 The video shows the plane – the world’s largest twin-engine jet – veering to the right after touching down.

The pilot immediately hits full power and takes off again.

On the second attempt, it’s a safe landing, but Mr Winton explains that initially it was thought that the aircraft had sustained damage.

He posted the video to YouTube with this caption: ‘The wind had been gusting at around 25 to 31kts this Thursday morning. Having established on the approach for runway 25 and been cleared to land by the controller, it looked like a normal approach in the challenging crosswinds from the south.

‘As the 777 disappeared behind the hedge before touching down, it slammed down onto runway 25, the spoilers deployed, and the next thing full power was applied for a go around.

‘I’ve never seen anything like it here at Newcastle Airport. The aircraft then came in for a second approach and landed safely.

‘Upon landing the aircraft was inspected and initially there was thought to be damage to the rear landing gear. Upon further inspection though it was deemed safe to fly and the aircraft departed Newcastle for Dubai 45 minutes later than planned.’

For nervous fliers, crosswind landings can be terrifying, but pilots receive thorough training on how to perform them.

On approach, they bring the plane in sideways to keep the nose lined up with the runway. It’s a technique known as a ‘crab’ landing. 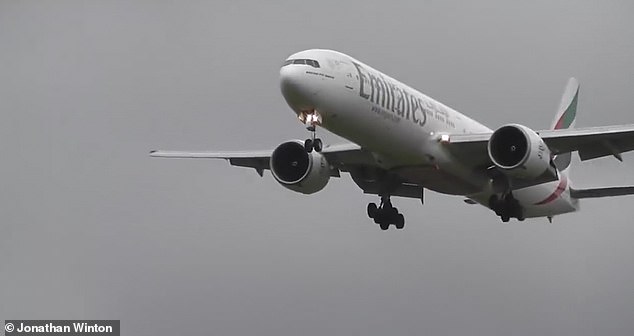 The 777, which was operating a service from Dubai, looked fairly stable as it made the approach in winds courtesy of Storm Diana – but the landing was far from smooth

Speaking to MailOnline Travel, Steven Draper, representative of the British Airline Pilots’ Association (Balpa) and a former pilot, said of the crab landing method: ‘Landing in strong crosswinds or turbulence goes beyond the capabilities of the aeroplane’s automatic pilot.

‘A pilot should be alert and free from fatigue when landing, and be given the opportunity to develop excellent handling skills.’

Speaking to MailOnline previously, Dai Whittingham, the chief executive of the UK Flight Safety Committee, stated that while crosswinds appear dangerous, they are an everyday occurrence.

He said: ‘High winds in themselves are not dangerous but they can certainly be inconvenient, especially if the wind direction is across the runway.

‘All pilots train to land in high crosswind conditions and will have practiced to the aircraft limits in the simulator.

‘When any new aircraft is certified to carry passengers it comes with a published crosswind limit, which is the maximum that has been demonstrated by a test pilot during the certification process. 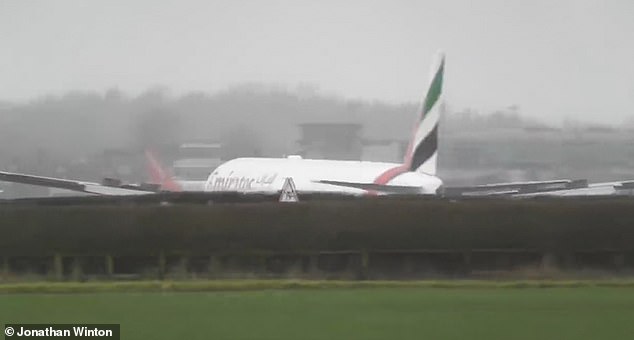 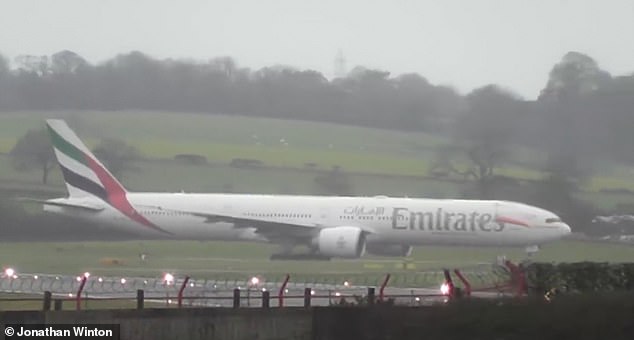 At first it was thought that the 777 had sustained damage on the landing, but it was given the all clear and departed for Dubai 45 minutes late

HOW DO PILOTS DEAL WITH TURBULENCE?

1. Grin and bear it – the aircraft is more than capable of withstanding the loads associated with turbulence (although severe turbulence can be quite uncomfortable and best avoided for passenger comfort).

2. Try flying higher (if aircraft performance allows it) or lower (although this burns more fuel and might make things worse).

4. Turn to avoid the area of turbulence if it’s localised (such as near a thunderstorm).

‘If the wind is outside that limit the crew will have to take the aircraft to an alternate airport where the wind is within limits (which means a runway that has less of a crosswind component).

‘In practice, the wind is rarely aligned fully with the runway so there is always a slight crosswind to deal with, it is just the amount of it that varies.’

Whittingham also noted that the public misconceptions about landing in strong winds is probably down to turbulence as the approaches are always bumpy.

Additionally, passengers do not have the same forward view as the pilot, which makes the sensation of being buffeted in all directions all the more uncomfortable.

He concluded by saying: ‘There is a briefing given before all approaches to ensure that both pilots understand the type of approach, what the division of duties are, and any special considerations.

‘A strong crosswind (or strong winds in general) would certainly be a briefing topic.

‘Both pilots will be monitoring the situation to ensure the wind does not exceed their limits and both will be alert to the possibility that the landing may need to be abandoned.

‘The pilots would also remind themselves of the correct techniques and decide on the additional safety factor to be applied to the target approach speed.’