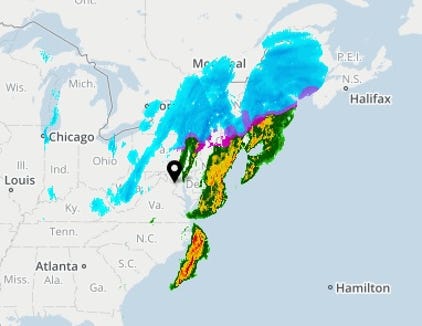 It’s been a rough holiday weekend for air travel.

Airlines have canceled more than 4,280 flights in the United States since Friday, with disruptions already extending into Monday.

The culprit has been a potent winter storm – dubbed “Harper” by The Weather Channel – that’s brought heavy snow, rain and strong winds to airports from the Great Plains and Midwest into the Northeast and New England.

On Sunday, more than 1,445 flights had been canceled nationwide and another 990 delayed as of 11:05 a.m. ET, according to flight-tracking service FlightAware.

TODAY IN THE SKY: The ‘boneyard’: Where airlines send old planes to be scrapped

Many of those cancellations were made pre-emptively by airlines by Saturday, in anticipation of poor weather. Sunday’s cancellations punctated what’s already been a difficult week for flying, adding to the 2,167 cancellations reported on Saturday and 522 on Friday, when the storm first began affecting flights in the Midwest and Great Plains.

By far the hardest-hit airport on Sunday was Boston, where about 470 combined arrivals and cancellations had been canceled by early Sunday morning. The majority of those cancellations also had been made pre-emptively by Saturday. In total, Sunday’s cancellations accounted for about half of the entire day’s schedule there.

Related posts:
01/21/2019 Travel Comments Off on Storm: 4,200 flights already axed as cancellations stretch into Monday
Recent Posts
We and our partners use cookies on this site to improve our service, perform analytics, personalize advertising, measure advertising performance, and remember website preferences.Ok