Le Massif had to be a mirage. Where were the lift lines? Actually, where were the lifts? How could this well-behaved mix of Anglo and French Canadians pull up to the parking lot, throw on their skis and schuss without pause down to the icy St. Lawrence River below? And how could I contemplate this upside-down cake of a mountain while debating with myself whether I would have codfish flan, osso buco, or chicken merguez for lunch at the fried food-free cafeteria? My 11-year-old son Luke had to nudge me from my reverie.

“Oui!” I agreed dusting off one of the rusty French phrases I’d polish up during our stay in Quebec. “On y va!”

Down we plunged toward the berg-strewn river, crisscrossing nearly empty runs and swinging past an off-piste glade so steep black diamond lovers could see over the treetops as they too raced down to the river. Off to my left was Baie St. Paul where fondue and a clutch of Charlevoix fromageries could be in my dinner future (along with a 20 percent Canadian-dollar-discount melted into the cheese). To my right, was Quebec, one of the oldest cities in North America, where there were too many fine dining options to cram into our short stay. The nine-and-a-half hour drive from New York had been worth it. 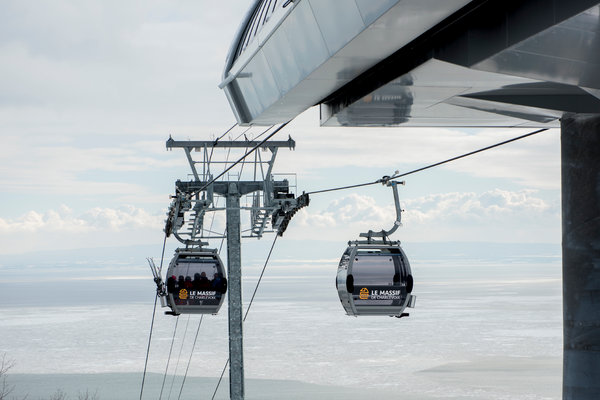 The idea of a ski holiday in Quebec had come to me gradually last winter in the same way a February blob of rain had spread a slow-moving holiday disaster across Eastern ski country, from the Camelback Mountain Resort in Pennsylvania to Killington, Vt. Could I outrun climate change? Possibly. It turns out there are not one but three major ski mountains close to Quebec City — Stoneham, Mont-Sainte-Anne and Le Massif. All had acquired a deep snow base from traditionally heavy downfalls in December and January. Rain threatened even Quebec in the forecast, but when I corresponded with locals about what else we might do beside ski, they produced such long lists that the deal was sealed. I packed my son in the back of my Honda et puis, on y va, et va, et va.

The many faces of Mont-Sainte-Anne

An essential question must be answered before choosing a base of operations in a visit to Quebec. Do you want an urbane vacation in a European-style city with an occasional jaunt to the slopes? Or do you want a ski vacation with a fantastic meal or two in town? My son has yet to find his inner gourmand so we chose the ski-based option and took up residence at Mont-Sainte-Anne de Beaupré. There we lodged in a pleasant two-room suite at the Chalets Montmorency, which came with easy access to a saltwater pool and Jacuzzi. If we’d had a few more Canadian dollars in our pockets we might have chosen the slopeside Château Mont-Sainte Anne which, like many hotels in Quebec has an outdoor Nordic spa.

But dollars be damned. A new Charlevoix regional website that combines lodging and skiing options at all three mountains helped us book a combined lift and lodging package and it took all of five minutes to get on the slopes at Mont-Sainte-Anne. There I gave my son over to Claude Dion, a dashing French-Canadian instructor who promised to annuler the last vestiges of Luke’s American snow plow.

Then I headed to the summit to see if my skiing was as rusty as my French. (The current price for four days of lodging and daily lift tickets for one child and one adult at Chalet Montmorency is 891.53 Canadian or $167 a night. That includes access to all three mountains — Mont Ste. Anne, Le Massif, and Stoneham.)

I must confess here that I consider myself an alpinist in the New Orleans tradition: I ski the blues. But no sooner had I turned onto my first blue of the trip than I realized something might have been lost in translation. The trail was called “Rigolo” — Joke. It was a challenging glade that had me splatting repeatedly into the frosted pines. Was this one of those double entendre French things? Was it called “Joke” because for some it was an amusing little cruise through the woods? Or was it a joke because it really was a black masquerading as a blue? After yet another 8-year-old blasted past me, I mustered my courage and soon I was on a wider trail that offered a glimpse of the wide icy St. Lawrence River that dominates views from Montreal to the Eastern Provinces.

One could easily spend several days exploring the mountain. Mont-Sainte-Anne has developed three faces of the 2,625-foot peak giving a total of 71 trails. North and south-facing options mean one can choose a slope according to the weather. On frigid days, the south slope offers abundant sun while the north, shaded side holds snow into late April. Locals escape to ski the empty western slope during the few heavy traffic periods around Christmas and the Quebec winter break (March 4-8 in 2019).

At the bottom of the mountain, my son’s instructor told me he had employed “virtual bluebirds” to which Luke waved “bye bye” on every turn to transform him into a parallel skier. This was proved after we rode the speedy gondola to the top and Luke left me in the dust. But when a light freezing rain began — and Luke in his brown parka began to resemble a piece of lacquered mahogany — we called it quits. Climate change had finally caught up with us. But to the south it was far worse. My partner texted me that it was 78 degrees in New York.

Poor conditions kept us off the slopes the next day, so we explored the city and outskirts instead. In summer when tourists crowd the restaurants and jam the narrow streets this would have been challenging. Not so in February.

Heading in from Mont-Sainte-Anne, we took a detour over to Île d’Orléans — a large wild island thick in maple forests interspersed with vineyards and small farms. We stopped at Cassis Monna et Filles where for 2.50 Canadian dollars I did a degustation of wine made from the black currents M. Monna and his two daughters grow themselves. The wines ranged from a light La Fruité to a fortified Le Capiteux. We snagged a bottle, as well as three jams Luke liked, and headed into the city for a midday repast.

It’s beyond the scope of a ski article to tackle Quebec’s food scene. The local chef and food enthusiast Nancy Hinton put it well when she wrote, “Quebec City beats to its own drum. Steeped in culinary tradition, yet open and creative, naïve and gutsy … the perfect mix of new and old.”

For new we went with Moine Echanson where a hip, floppy-haired waiter from “way, way up north” translated the chalkboard menu on the fly. There were abundant, biodynamic wines the restaurant self-imported but only four main courses: seal tartare; an assiette of razor clams oysters and cod fritters; venison osso buco; and grilled foie d’agneau. My son grimaced. “You can have the cod fritter,” the waiter said apologetically, “it’s like a doughnut.” It was not.

Our next meal was considerably more child-friendly because the restaurant I chose had been frozen in amber circa 1972. Le Continentale is a stone’s throw from the spectacular Le Château Frontenac and features white tuxedoed waiters who prepare tableside Caesar salads and flambés that would make Julia Child blush. As flames shot two feet in the air our waiter explained that he used to snowboard but that after breaking his wrist on a rail trick he’d quit to protect his bread-and-butter, which was flipping blazing ducks a l’orange in the air.

From the parking lot to the slopes

Had we chosen an urban Quebec vacation we probably would have overnighted at Auberge de St. Antoine which offers a 40 percent winter discount. The clean-lined jewel box ornamented with 17th century French artifacts is walking distance to the old city but also offers easy access to the auto routes heading to the slopes. But since we had two more mountains to conquer we hit the road and the next morning we were on the upside-down Le Massif de Charlevoix.

As I mentioned earlier, you can ski Le Massif right from the parking lot. That’s because the mountain is actually a 2,600-foot high bulge in the St. Lawrence riverbank and you park at the top. The nice thing for a blues skier is that the formidable views give even the easy trails a trompe l’oeil plunge effect: the thrill without the terror. But 2,500 of those 2,600 feet are a vertical drop and 15 hectares of scream-worthy off-piste glades are available for the terror seeker. Non-skiers can nab the view on the longest sledding run in North America. For $44.95 (U.S.), a snowcat will deposit you atop a separate slope and then for 40 minutes you can sled 7.5 kilometers to the bottom.: Plan on two hours for a round-trip.

We wanted to get to our last mountain before nightfall so we zipped down to Le Germaine Hotel and Spa in Baie St. Paul for a snack. Then we doubled back through Quebec City in heavy snow, past signs advising what to do in the event of a moose collision (dial 511) and checked into Le Manoir du Lac Delage.

Our last morning in Quebec, I took a final Nordic Spa at the Manoir and then hopped over to Stoneham Mountain to ski with the village’s former assistant mayor and perpetual enthusiast Jacques Dugal. “It’s like a bowl here, Mr. Dugal told me, “protected from the river and so we get really nice powder.”

Stoneham, while not offering Massif river views has lovely vistas of Jacques-Cartier National Park. The closest of the three resorts to the city, locals often head there for a quick after-work schuss or a romp around its terrain park, which includes an Olympic halfpipe. The mountain offers night skiing on 19 trails all week long — that and the nearby brasserie La Souche make it something of a hub for out-of-town night life.

I wanted to party with all those bighearted, bilingual Canadians. There was still so much winter here! An ice hotel! The largest tubing park in North America! All-you-can-eat maple sugaring shacks like Cabane LeClerc that fed us flapjacks, maple cured pork and meat pies before we hit the road. Even a “Foret Perdue” on the way back through Trois-Rivières where you can skate over Zambonied ice paths through miles of frosted forest.

But school vacation was ending and my melting-down country beckoned. We buckled in for the long drive, lamenting that where we were going was not half as good as what we were leaving behind.

Paul Greenberg is a frequent contributor to the Times and the author, most recently, of “The Omega Principle.”

11/26/2018 Travel Comments Off on Skiing Quebec, Where the Chef’s Table Is Just a Schuss Away
Recent Posts