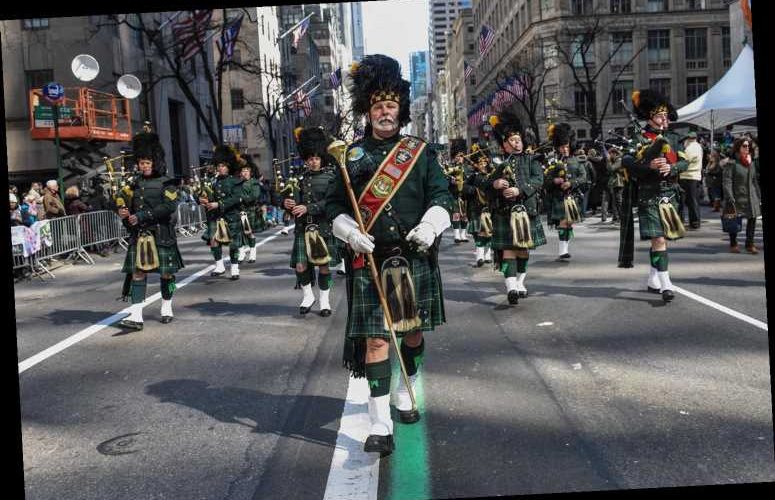 As the Covid-19 pandemic continues across the United States, many cities are taking a virtual approach to this year's St. Patrick's Day celebrations.

St. Patrick's Day was one of the first holidays on the calendar to be impacted as the pandemic took hold in North America last March, and for the second year in a row, cities are being forced to get creative when it comes to their festivities.

While many states have started to scale back on their Covid-19–related restrictions, most cities will still not allow for large gatherings like parades.

Almost all cities have canceled their annual parades and halted any in-person activities for the holiday on Wednesday. However, that hasn't stopped them from coming up with new ways to honor the green-filled day. While Chicago isn't holding an in-person parade, the city went forward with one of its other annual traditions of dyeing the Chicago River bright green. The city has celebrated with this unique tradition since 1962.

Mayor Lori Lightfoot decided not to dye the water last year over concerns of drawing in crowds but changed her mind this year in hopes of lifting spirits. In order to avoid crowds, the river-dyeing was not publicized, according to the New York Post.

The St. Patrick's Day parade in New York City, a longstanding tradition since 1762, will be held virtually this year and will honor first responders and essential workers who helped battle the pandemic, according to the parade's website.

The parade will begin with a broadcast of the St. Patrick's Day Mass at St. Patrick's Cathedral in Manhattan followed by a virtual parade of past marching groups. Events will continue on the website throughout the day. In Boston, where the parade has been canceled for the second year in a row, those who want to honor the holiday can go for a self-guided walk of the Irish Heritage Trail. The Irish Film Festival in Boston will also run virtually from March 17 to March 21, according to Forbes.

While the traditional parade is canceled in St. Paul, Minnesota, the city's St. Patrick's Association will be hosting the "2021 Irish Mask-arade," a drive-thru event where attendees can see stationary parade units, Forbes reported. The event will also be live-streamed on Facebook.

According to the New York Times, several other cities are getting creative with their events as well.

A celebration in Hilton Head, South Carolina, will be moving to the water for a boat parade, while the annual parade in St. James, on Long Island, will be in cars.

In Philadelphia, the city will celebrate the holiday by serving green beer in plastic cups at McGillin's Olde Ale House.

As information about the coronavirus pandemic rapidly changes, PEOPLE is committed to providing the most recent data in our coverage. Some of the information in this story may have changed after publication. For the latest on COVID-19, readers are encouraged to use online resources from the CDC, WHO and local public health departments. PEOPLE has partnered with GoFundMe to raise money for the COVID-19 Relief Fund, a GoFundMe.org fundraiser to support everything from frontline responders to families in need, as well as organizations helping communities. For more information or to donate, click here.

03/16/2021 Travel Comments Off on See How These Cities are Celebrating St. Patrick's Day 2021 — and How You Can Join from Home
Recent Posts