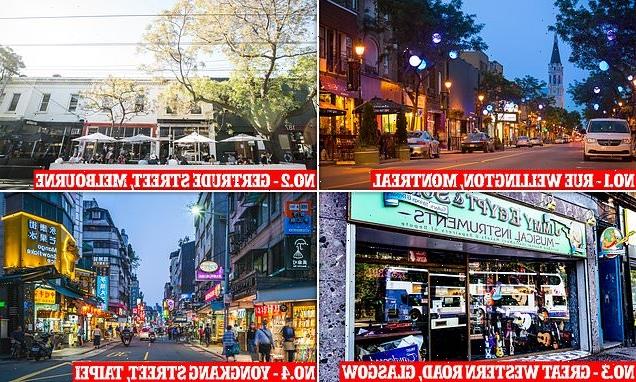 The world’s coolest streets in 2022 ranked by Time Out – and it’s Montreal’s Rue Wellington that’s No.1, followed by a ‘beautiful’ Melbourne road and (part of) the A82 in Glasgow

The world’s coolest streets have been named by Time Out – and it’s ‘bustling’ Rue Wellington in Montreal, Canada, that takes the top spot.

It’s followed by Melbourne’s ‘beautiful’ Gertrude Street in second place and a ‘buzzing’ section of the A82 in Glasgow in third place. The highest-ranking U.S street is in San Francisco.

The 33-strong ranking – compiled from a survey of more than 20,000 international city-dwellers and the thoughts of Time Out’s global editorial team – sets out to ‘shine a spotlight on some of the most culturally-vibrant and dynamic microcosms of cities globally’. Scroll down to see the results in full…

The world’s coolest street is Rue Wellington (above) in Montreal, according to Time Out. The annual ranking sets out to ‘shine a spotlight on some of the most culturally vibrant and dynamic microcosms of cities globally’

Gold medal winner Rue Wellington, which lies in the Montreal borough of Verdun, offers ‘killer cocktail bars, stellar brunch spots, some of the best sandwiches in town and even a sandy urban beach’, according to Time Out.

It continues: ‘From a sparkling new French bistro, Paname, to cult cafe Lili & Oli, this picturesque, bustling street in southwestern Montreal is home to almost 200 businesses, including a brand new local bagel shop. Come summer, the promenade becomes pedestrian-only, with a free tuk-tuk service to get you from one end to the next. Does it get any cooler than that?’

The guide recommends eating at Paname or grabbing a ‘kickass’ sandwich from Bossa before drinking cocktails on the ‘swish patio’ of Bar Palco. 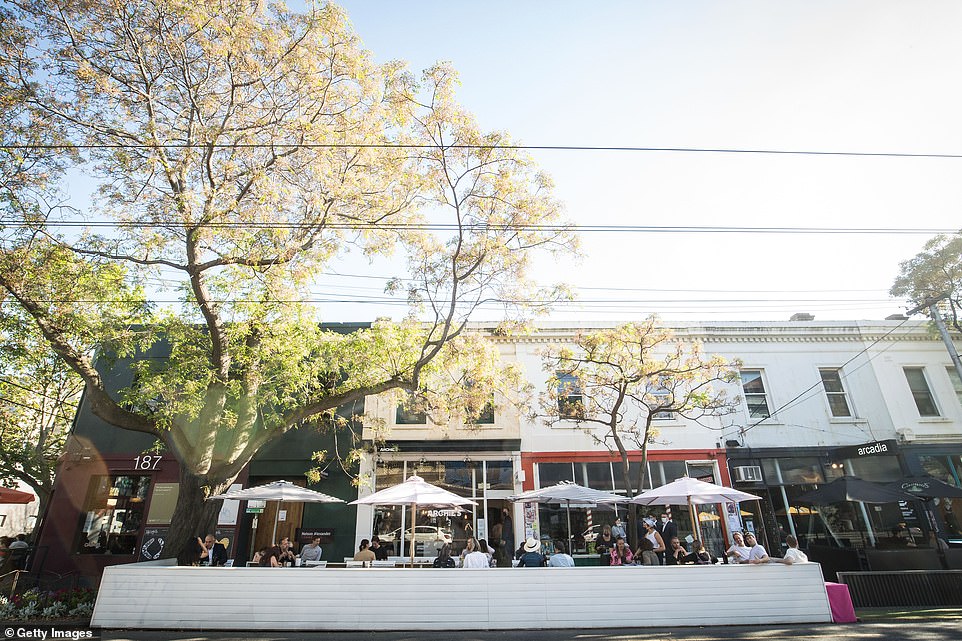 Time Out says that second-place Gertrude Street, which can be found in the Fitzroy area of Melbourne, ‘feels impossibly leafy, slow and peaceful’

Time Out describes Gertrude Street, set in the Fitzroy area of Melbourne, as ‘beautiful’ and ‘unassuming’, noting that it has a ‘wealth of independent retail, drinking and dining joints’.

The guide says: ‘Despite its proximity to the city centre, this 850-metre (2,788ft) stretch feels impossibly leafy, slow and peaceful. Surrounded by heritage-listed facades (and a distinct lack of non-permit parking), Gertrude maintains a very locals-only, if-you-know-you-know kind of energy.

‘Like the people who live on and around it, it’s almost annoyingly cool. Almost.’

If you’re stuck for things to do there, the guide recommends heading for an ‘Italian-leaning’ dinner at the Art Deco restaurant Poodle before treating yourself to a cocktail at Everleigh. 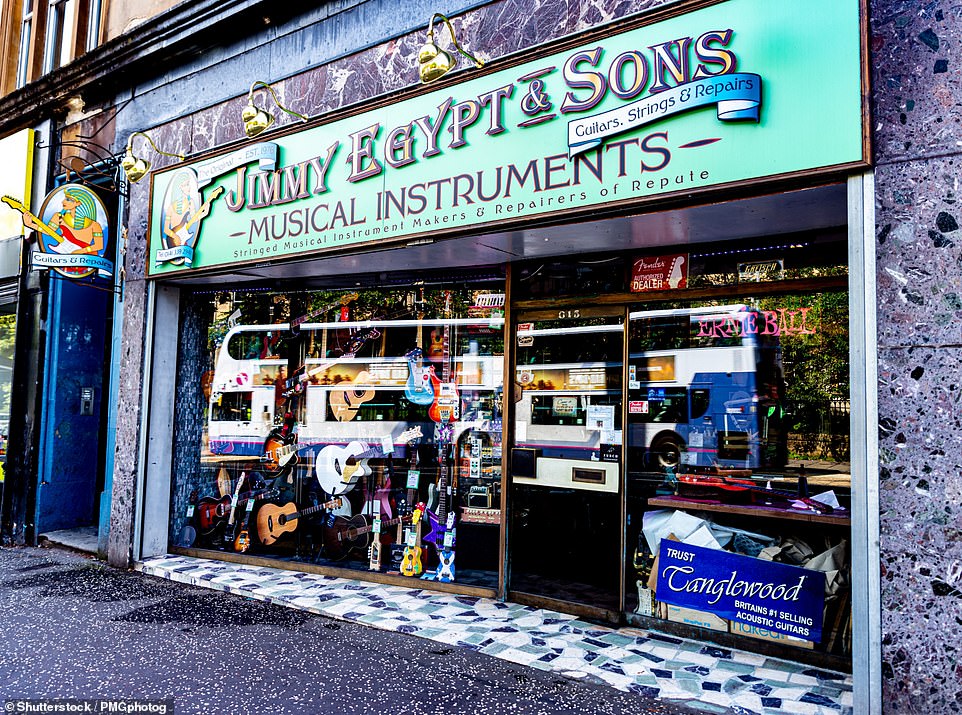 Third place is scooped up by a portion of the Great Western Road in Glasgow. Above is a shop on the street – Jimmy Egypt and Sons Musical Instruments

The bronze medal goes to the Great Western Road in Glasgow, which forms part of the A82.

The section that wins the road third place in the ranking runs from Botanic Gardens to St George’s Cross junction.

Time Out says that this section is ‘abuzz morning through night with all from latte-sipping mums and dads to students and full-on hipsters’.

It reveals: ‘Here you’ll find everything from inexpensive Neapolitan pizzas and beer schooners at Paesano to thrift shopping at Glasgow Vintage Co, West and Duds; riverside craft brews at Inn Deep to sweaty basement gigs at the Hug and Pint; late-night pours at Oran Mor to hangover-busting coffees and breakfast burritos at Papercup.’

The guide recommends trying the ‘exquisite’ tasting menu at ‘Michelin star decorated’ Cail Bruich for £125, or heading for pints at the ‘living-room sized proper wee pub’ The Belle. 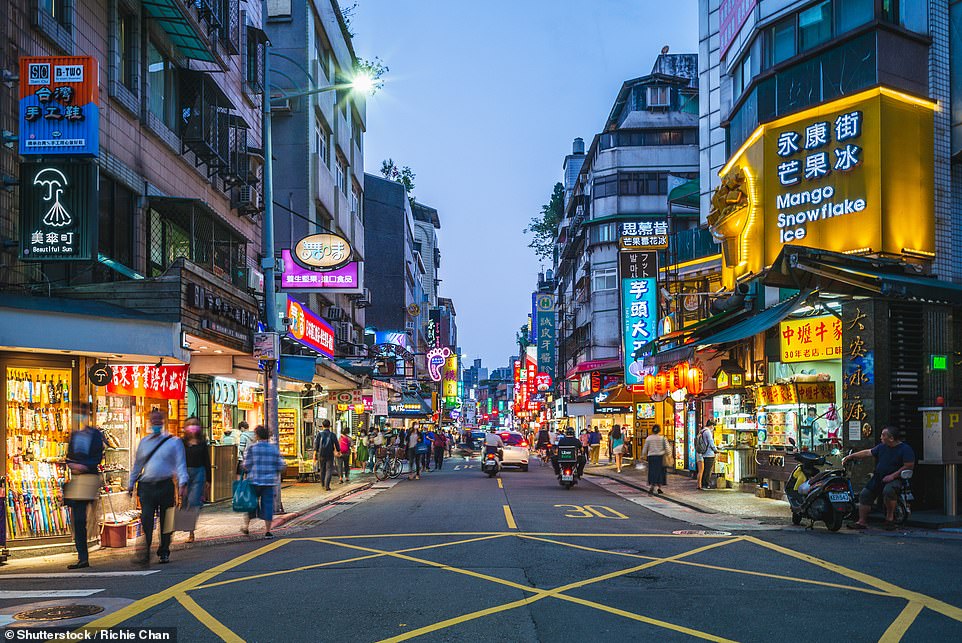 Taipei’s Yongkang Street (pictured), which ranks fourth, has an ‘individualised vibe with an artisan edge’

‘There’s nowhere else in Taipei quite like Yongkang Street, a mellow lane in the genteel Dongmen neighbourhood packed with excellent restaurants, holes-in-the-wall sizzling with traditional fried snacks, decadent dessert parlours, upmarket boutiques and historical tea rooms with all the ceremonial trappings,’ says Time Out.

It continues: ‘Foodie reputation aside, Yongkang has ditched chain-store blandness for an individualised vibe with an artisan edge: witness its local carpenter, traditional pharmacy and jewellery workshops.’

The guide recommends sampling shaved ice desserts from Smoothie House, nursing craft beers in the garden of Zhang Men Brewing and picking up some ‘alternative’ gifts at the street’s Littdlework shop. 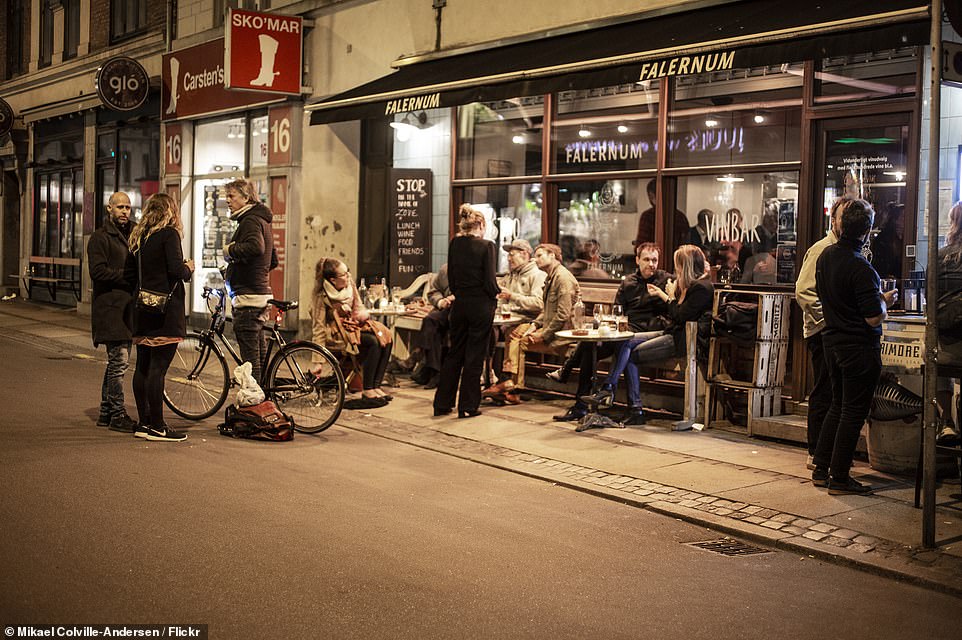 Time Out recommends dropping by the natural wine bar Falernum, pictured, on a visit to fifth-place Vaernedamsvej in Copenhagen. Image courtesy of Creative Commons

You’ll find this street – ‘a hub of cool’ – in Copenhagen’s Vesterbro neighbourhood.

‘With its fresh flowers, cute boutiques, wine bars, cheese shops and even a French lycee [school], it’s something of a mini-Paris in the Danish capital,’ Time Out reveals.

The guide has a few tips for where to eat and drink on the street – try the ‘towering seafood platter’ at Les Trois Cochons and sip on natural wine at Falernum, ‘a newish institution renowned for its minimal-intervention winemaking process’.

It adds that if you drop by Granola for a coffee, you ‘might get chatting to a florist, a cook, a cheesemonger, a wine enthusiast – or even a celeb, such is the draw of Vaernedamsvej’. 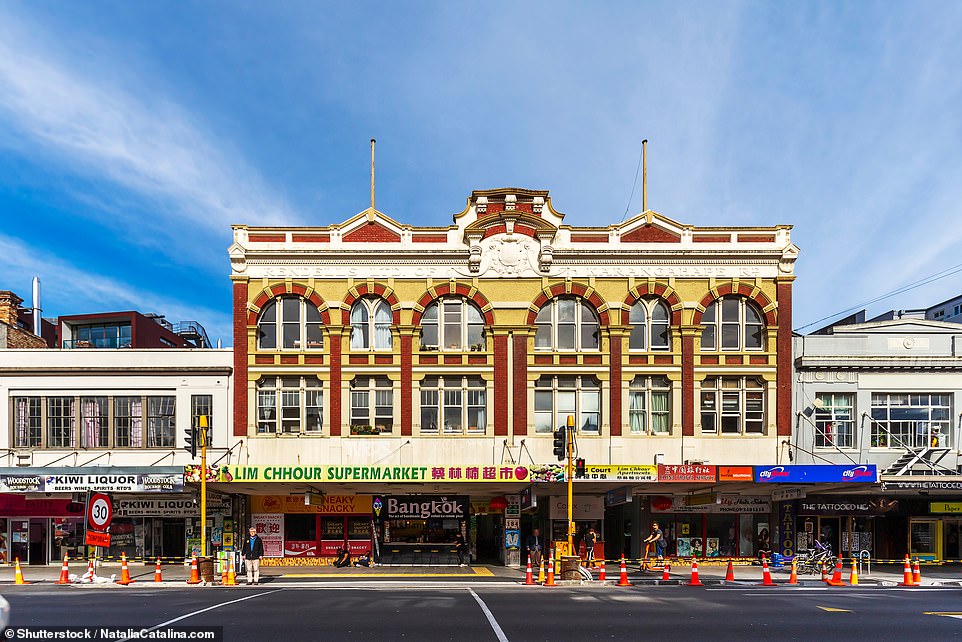 ‘Every door leads to something very different’ on Auckland’s Karangahape Road, a street that lands sixth in the ranking

‘Karangahape Road – known to Aucklanders simply as “K Road” – is the city’s bohemian heart and the home of a diverse and expressive community of artists, musicians, and creatives,’ says Time Out.

It continues: ‘Its red-light history, coupled with the more recent additions of art galleries and hip cafes in its heritage buildings, gives it plenty of character: every door leads to something very different. Gay clubs, speakeasy-style bars and cabarets sit alongside thrift stores, secondhand book shops and independent record stores.’

Check out the road’s street-art murals, shop for vintage clothes at Crushes and Smoove, and stop for Italian food at ‘local favourite’ Cotto.

Time Out adds that the street comes ‘into its own’ at night – ‘live music venues The Wine Cellar, Whammy Bar, and Neck of the Woods are favourite haunts for music-lovers’, it says. 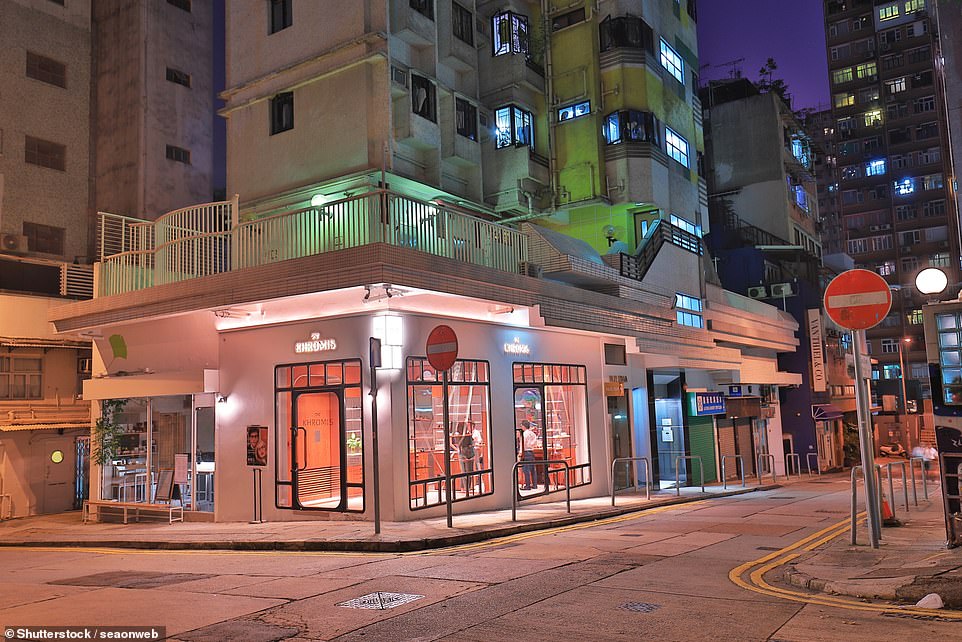 The ranking was composed based on a survey of more than 20,000 global city residents, who were ‘asked to nominate their city’s coolest street’. To put together the final ranking, Time Out’s international editorial team narrowed down the selections, ‘factoring in food, drink, fun, art, culture, nightlife and community vibes’.

This year’s list comes as people are ‘getting out and experiencing the best of cities again’, says Time Out.

James Manning, Travel Editor at Time Out, explains: ‘In most of the world, pre-pandemic life has returned with a bang. With people excitedly making plans and going out in their own cities and on city breaks again, our list of the Coolest Streets in the World takes in the key thoroughfares which clued-up locals – including our expert editors and contributors – recommend strolling down right now.’

New cities to enter the ranking include Auckland, Athens, Toronto, Taipei, Glasgow, Manchester, Accra in Ghana, Mumbai and Medellin in Colombia. Of these destinations, Manning adds: ‘These are some of the cities whose burgeoning nightlife, culture, food and drink scenes we are extra excited about right now. We recommend adding these cities and their coolest streets to your “must-visit” list, pronto.’

For more information on the ranking, visit www.timeout.com/things-to-do/coolest-streets-in-the-world.

‘Tai Ping Shan is a historic micro-neighbourhood embedded in Sheung Wan, one of the oldest but also one of the most dynamic districts in Hong Kong,’ Time Out explains.

It continues: ‘The street at its centre was the city’s first Chinese settlement, but today it’s been transformed into a cool bohemian enclave dotted with trendy cafes, independent shops and old and new eateries – many of which are housed inside tenement buildings, rubbing shoulders with some of Hong Kong’s oldest and most historically significant temples.’

Wondering what to do while you’re there? Time Out advises visiting several old temples in the area, before tucking into ‘contemporary Nordic fine dining’ at Embla or sipping on artisanal teas in ‘hip but tranquil’ Ho-ah. 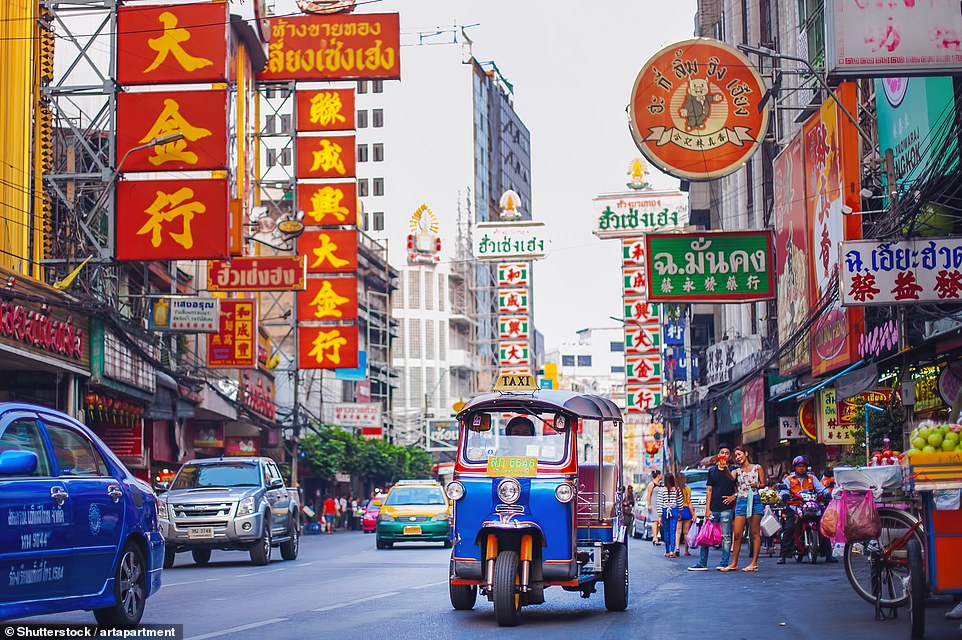 You’ll find temples, restaurants, markets and legions of acupuncturists and dispensers of Chinese medicine on a visit to Yaowarat Road (above) in Bangkok. The street is eighth in the ranking

Describing this street, Time Out says: ‘One of Bangkok’s oldest thoroughfares, with a history that dates back to the city’s foundation, Yaowarat Road winds and curves through Bangkok’s riverside Chinatown.’

It continues: ‘Lined with neon signs and bustling day or night, this cultural hub is home to temples, restaurants, markets and legions of acupuncturists and dispensers of Chinese medicine. It’s been a street food lovers’ favourite for generations, but lately, the area has seen cool galleries and high-end restaurants move in too, keeping Yaowarat as relevant and culturally diverse as the day it was paved.’

Pay a visit to the ‘buzzy contemporary art space’ of Over the Influence, dine on Thai-Chinese fusion cuisine at Potong, or drink ‘delicious, mindfully-brewed tea’ at the Double Dogs Tea Room, Time Out recommends. 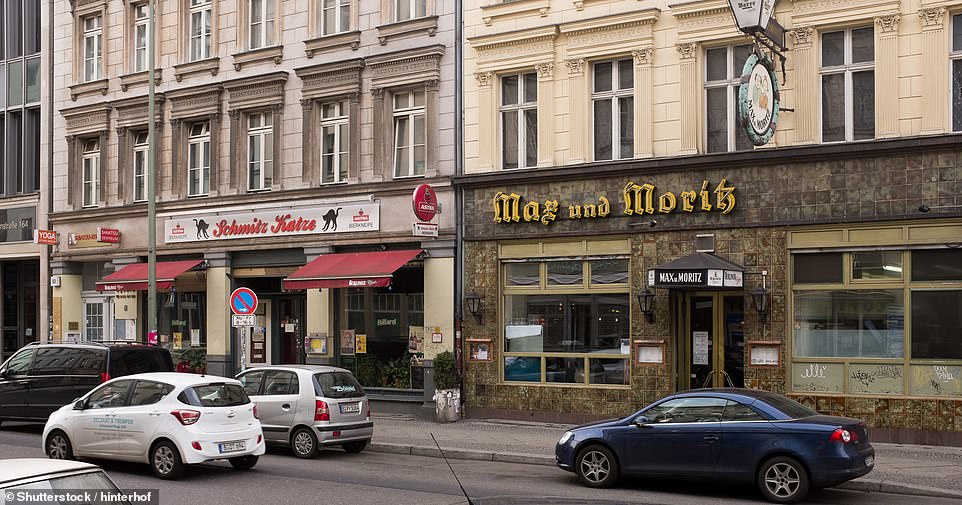 Oranienstrasse, a street in Berlin’s Kreuzberg neighbourhood, is known as a ‘popular nightlife hub for locals and tourists alike’

Oranienstrasse, a street that runs through Berlin’s Kreuzberg neighbourhood, ‘is famed for its fresh Turkish food and lively cocktail bars, all wedged between extensive mid-century flats that were rebuilt after much of the street was devastated in WWII’.

The street is a ‘key site’ for ‘local political demonstrations and protests all year round’, Time Out notes.

The guide advises making the most of ‘Oranienstrasse being a popular nightlife hub for locals and tourists alike’ by paying a visit to venues such as Roses or Cafe Luzia.

It also suggests feasting on ‘majestic’ fast food from Angry Chicken and investing in hardcore and punk records from Coretex Records. 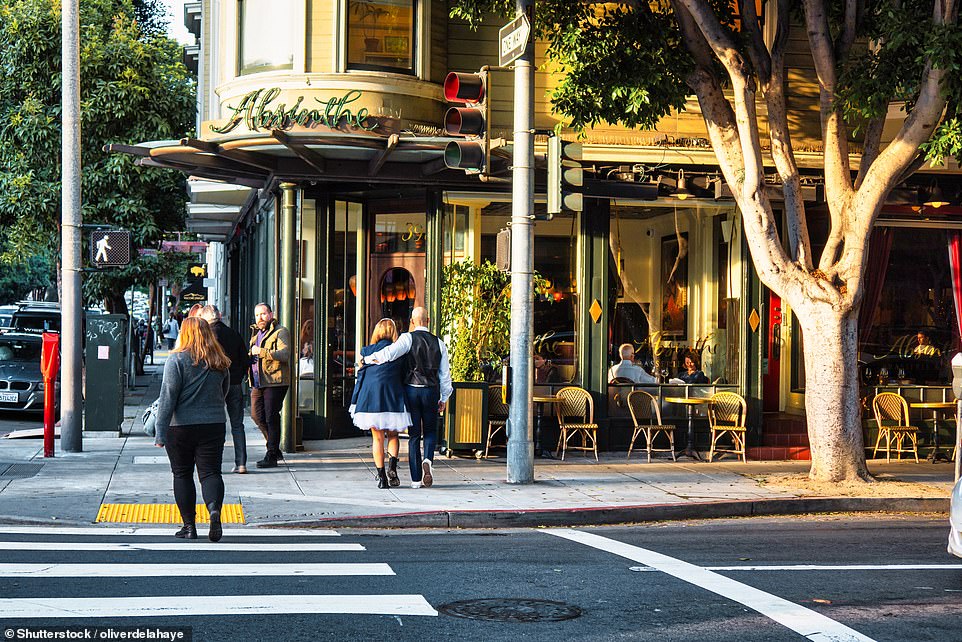 Hayes Valley in San Francisco, which lands 10th in the ranking, boasts ‘some of the city’s most exciting restaurant openings and trendiest storefronts’

This street is the main drag of Hayes Valley – ‘one of San Francisco’s trendiest neighbourhoods’, according to Time Out.

The guide says: ‘Hayes Street meshes old San Francisco – with its quirky shops and long-time eateries – with some of the city’s most exciting restaurant openings and trendiest storefronts.

‘Once you’re done trawling the boutiques, where you can splurge on everything from clothing and jewellery to home goods and gifts, end your Hayes Street spree with a drink at a charming wine bar or a bite to eat on a sidewalk patio.’

What are Time Out’s hot tips for the street? Shop at the ‘local favourite’ gift store Rare Device, eat a ‘casual lunch’ at Mano and pick up a take-out coffee from Ritual Coffee.

THE 33 COOLEST STREETS IN THE WORLD, ACCORDING TO TIME OUT