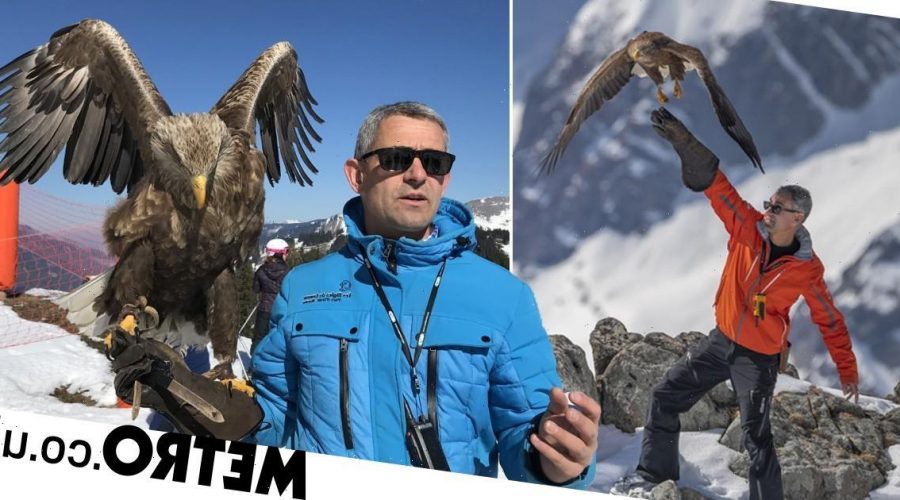 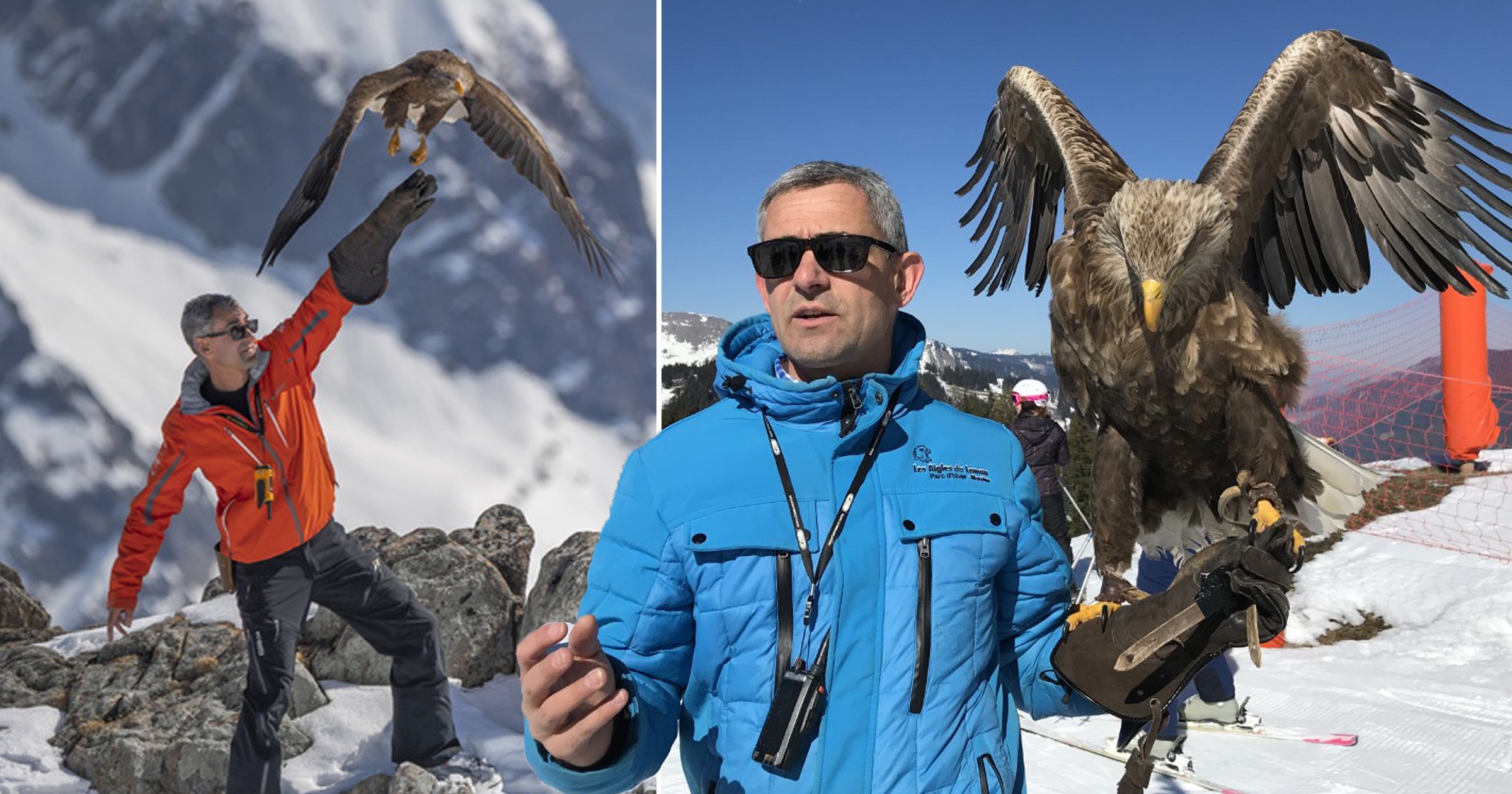 It doesn’t take an eagle-eyed bird watcher to realise what the surprised skiers of Morzine are skidding to a stop to stare at.

Fletcher, a fearsome seven-year-old who has a striking relationship with his handler, is soaring high above the slopes of the French alps.

The white-tailed eagle breezes through the sky with a few magisterial flaps before landing effortlessly on Jacques-Olivier Travers’ arm – even as his trainer skies down the piste.

But Fletcher is not the only impressive bird regularly on display at an unassuming mountain restaurant home to an on-piste aviary.

Staff at Les Aigles du Léman’s winter park are attempting to grow the population of birds of prey in the area – and ‘skiing with eagles’ is one of their more novel strategies.

‘Conservation is complicated to explain to people’, Jacques-Olivier says.

‘With Fletcher it is very easy because everybody who sees Fletcher playing with me thinks: “wow, it’s so beautiful and he’s not aggressive with anybody, he can fly with people”.

‘He is really the best ambassador we have in the programme.’

The conservationist puts on stunning shows with his eagle, and explains more about the animal to those watching.

Jacques-Olivier hopes that increased public awareness can help the birds prosper in the resort and beyond.

It is not the only initiative at Morzine focussing on environmental efforts, with the resort recently winning an aptly-named Flocon Vert (Green Snowflake) eco award.

Elsewhere, some lifts have high-visibility markers, to make sure the overhanging wires are visible, in an effort to help many of the larger birds, whose numbers have been dwindling.

In the vast Portes du Soleil, there is also a protected area for endangered black grouse, who don’t breed if disturbed by humans.

But undoubtedly the most eye-catching initiative is the Pointe de Nyon restaurant-cum-aviary, which also boasts vultures, owls and buzzards.

Guests can have a meal before or after taking in the remarkable bird life on display in this highly unusual setting.

Educational talks are available for children and adults, alongside demonstrations on the slopes, like those with Fletcher.

‘We make lots of events and things to teach people that it is normal that they (the birds) live here and we have to accept them’, Jacques-Olivier explains.

‘We hope that it will work.

‘The most difficult thing is to breed in captivity because these birds produce only two babies per year – when it is perfect – and most of the time it is one. It means that we have 10, 12 babies to release each year.’

The ultimate aim is to increase population sizes, Jacques-Olivier continues – but that will be a long process.

‘In France, in the wild, we now have three pairs, all are in the north of France’, he says.

‘We expect that the birds we release will go to these pairs and with babies and cross together… that’s the goal.’

But the overall ambition is far more wide-reaching, the conservationist says, delving into the history of Fletcher’s species.

‘Two hundred years ago, the white-tailed eagle was from Morocco to England and now they disappear completely.

‘We have a programme in the south of England, in France and in Spain – and the goal is to repopulate all of western Europe.’

That may be some way off, but if Fletcher’s work can turn a tiny fraction of Morzine’s skiers into eagle-eyed bird watchers, perhaps he will have had a claw in helping many more birds to thrive.

Ski with an eagle then have lunch in the same spot at the Pointe de Nyon restaurant on the slopes, from €75 per person. For more information click here.

07/24/2022 Travel Comments Off on Meet Fletcher, the eagle who skis with his handler in the French Alps
Recent Posts