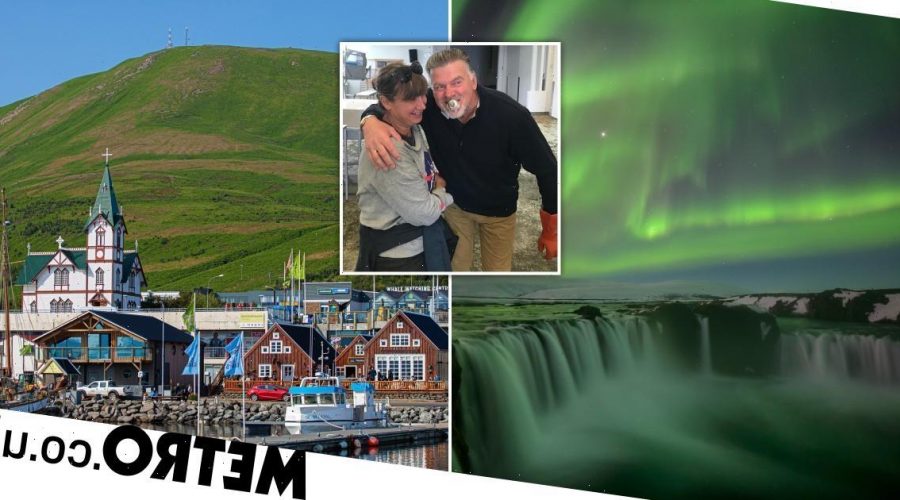 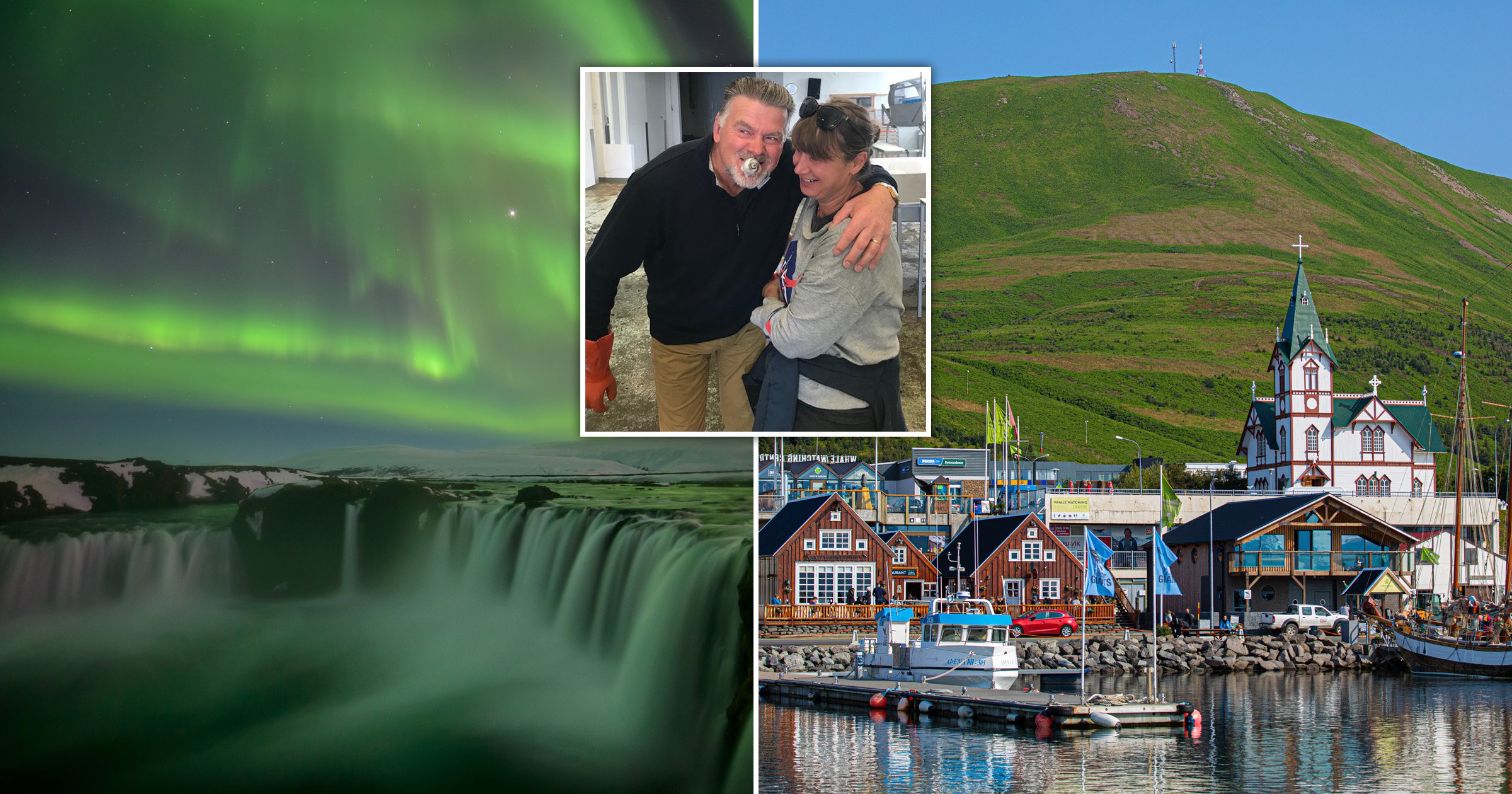 ‘Don’t be put off by the smell – the taste is much worse!’ jokes Elvar Reykjalín, the twinkly-eyed owner of a fish-processing plant, as he hands me… fermented shark meat.

Yes, I’m in the village of Hauganes, by Eyjafjörður, one of the longest fjords in Iceland.

I take a sniff and recoil. I’m getting a strong whiff of bleach which, explains Elvar, is caused by the fact that sharks can’t process urine through their kidneys.

When they pee, it’s absorbed throughout their body, giving it an, ahem, unique flavour.

I bite the bullet and chomp the proffered pork-like chunk of pale pink meat. It tastes like ammonia and blue cheese, and is possibly the vilest thing I have ever eaten.

As my eyes water, Elvar laughs heartily and hands me a certificate. ‘Welcome to the Rotten Shark Club, of which I am president!’

Earlier that day, I arrived in the north of Iceland on a direct flight from London Stansted, thanks to a new route from a new Icelandic airline, Niceair, which launched last week.

Previously, if you wanted to explore northern Iceland’s stunning coastline and its Diamond Circle route, you had no choice but to fly into Reykjavík, then do a six-hour drive.

It will be followed in October by a route from Manchester in time for Northern Lights season – traditionally more reliably visible up here than down south. The flight lands in

Akureyri (pronounced A-koo-ee-yeri), a handsome town of 18,000 people at the base of Eyjafjörður, which I immediately fall for due to its red traffic lights in the shape of a heart.

Back in Hauganes, Elvar demonstrates how to gut a fish, which he uses to make a more palatable delicacy of baccala [salted cod], before chasing me around the room with its eyeball in his mouth. Oh, those wacky Icelanders!

He is, however, rightly proud of the little empire he’s established on the shores of the fjord, with a campsite, hot tubs filled with water from the thermal springs which permeate the country, and a restaurant called Baccalá Bar.

I head on to Húsavík with my genial guide, Hjalti, and manage to divert him from showing me the town’s whale museum and into a new attraction at the harbourside Cape Hotel.

It involves walking through a bar named Jaja Ding Dong (if you know, you know) and it is, essentially, a museum devoted to both Eurovision, and the 2020 film Eurovision Song Contest: The Story Of Fire Saga, which was largely set in Húsavík (tickets, £9.25).

It displays props and costumes used by stars Will Ferrell and Rachel McAdams. ‘A lot of them were just made with cardboard, duct tape and spray paint,’ reveals manager Frank Steinecke. ‘The white satin dress Rachel wore for the finale was actually made from a curtain.’

Next day, I see more of Iceland’s volcanic terrain up close, with an off-road tour on a pimped-up SUV called a Superjeep.

We rattle over ancient lava fields, the massive tyres making light work of the bumpy surface, and stop to gawp at a couple of vast craters created by volcanic activity.

Most of the landscape is pockmarked with inescapable evidence of the natural phenomena that shaped the country thousands, if not millions, of years ago. Afterwards, Hjalti takes me to see the beautiful Grjótagjá cave, a sapphire-hued geothermal pool used for a scene in Game Of Thrones featuring lovers Ygritte (Rose Leslie) and Jon Snow (Kit Harington).

Above it is what’s known as the Rocky Rift, where two tectonic plates have pulled apart. Close by is Goðafoss waterfall, one of many thundering bodies of water along this stretch of the coast.

I end my trip in the latest addition to Iceland’s thermal spa scene, the Forest Lagoon (entry £37), which is set back from the fjord, near Akuyeri.

Surrounded by birch trees, I wallow in 39C heat, looking out across the much colder fjord below (you won’t find many wild swimmers in Iceland; as Hjalti says sensibly: ‘Why would we when we’ve got access to all the hot pools we want?’)

This place is beautiful and bonkers so will I come back? Jaja ding dong, yes!

Flights from London Stansted to Akureyri from £108 one-way with Nice Air. Rooms at Kea Hotel, Akuyeyri, from £229pn. Tours of Eskafiskur and tasting from £25pp. 12-hour Superjeep tour, from £305pp with Geotravel. For more information see Visit North Iceland.

Translating to ‘lake of midges’, yes, you will encounter these pesky flies, but you can also hike, paddleboard and kayak at this serene body of water, or visit the Nature Baths.

Legend has it that this collection of rocks (the Dark Fortress) are a group of trolls who partied until the sun rose and they were turned to stone.

This is also said to be where the Yule Lads – think mischievous Santas – hang out.

This tells the history of Iceland’s herring boom. From 1903 to 1968, herrings made up 40% of the country’s exports. Find out how local people used to live and work.

What’s not to love about wallowing in a bath of beer (sadly with the alcohol removed) which also has beer on tap? Bjórböðin spa, attached to Kaldi microbrewery, revitalises skin and hair.

Humpbacks are most common in the north and you can see them here year-round – along with minke whales, blue and fin whales, belugas and porpoises.

Book tickets from £74pp with Elding.