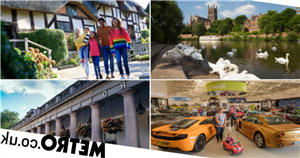 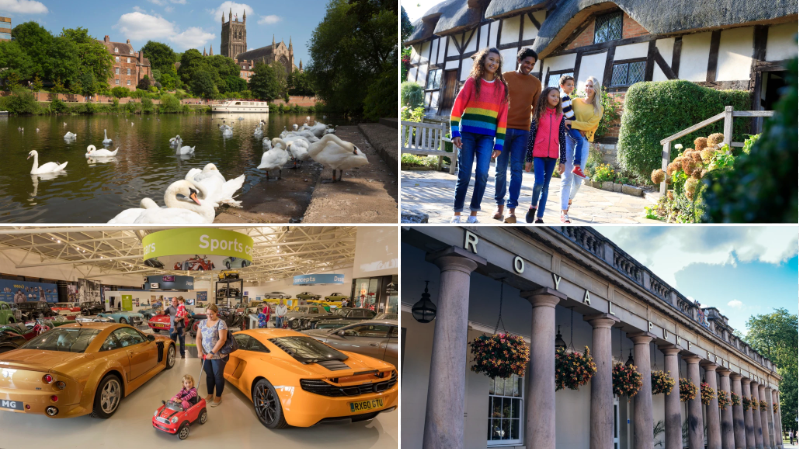 With the Commonwealth Games in full flow, Birmingham is a hive of activity.

And while Britain’s second city is the vibrant heart of the region, there’s no shortage of places to investigate in the surrounding areas.

Head south, beyond the M5, M42 and M40, to rolling hills, historic properties and the imprint of famous figures whose lives have shaped the world.

As a birthplace of the Industrial Revolution, the echoes of once-great industries remain strong across the region. In Kidderminster, home to the Severn Valley Railway, you’ll find The Museum Of The Carpet, dedicated to the manufacturing industry that once dominated the small Worcestershire town, while Redditch’s Forge Mill Needle Museum, near the ruins of a medieval Cistercian abbey, tells the story of Victorian needle-making there.

The world’s largest collection of historic British cars at The British Motor Museum, in Warwickshire, reflects the West Midlands’ status as the centre of the nation’s vehicle industry.

Other transport-related collections are at Kidderminster Railway Museum; The Engine House on the Severn Valley Railway in Shropshire; Coventry Transport Museum, and the National Motorcycle Museum in Solihull.

Among many historic properties, in rolling Worcestershire and Warwickshire countryside in particular, Hanbury Hall is a stunning William and Mary-style country house, garden and park near Droitwich Spa, while Croome has parkland and walled gardens on the other side of Worcester.

For a great Warwickshire triple, Coughton Court is an imposing Tudor house near Alcester, while Baddesley Clinton is a moated manor with Packwood House close by.

Less grandiose, the Rock Houses at Kinver Edge – ‘cottages’ carved into sandstone hills near Stourbridge – were lived in until the 1960s.

Chaddesley Woods, dating back to the 13th century and Worcestershire’s second largest woodland, is one of dozens of Midlands nature reserves, ranging from open grasslands (Windmill Hill, near Alcester), to reclaimed land (Goldicote Railway Cutting, near Stratford-upon-Avon).

How to get there: Regular trains from Birmingham Moor Street and Snow Hill stations. Takes about 30 minutes.

Why visit? The small market town of Warwick is dominated by Warwick Castle – one of the greatest (and most popular) fortified castles still standing in England. Developed from a wooden fort, it was rebuilt in stone in the 12th century, and sits on a bend on the River Avon.

Keen to maximise its appeal, the castle’s attractions include The Kingmaker, which looks at preparations for battle during the War Of The Roses and The Great Hall, with its impressive collection of arms and armour.

There are also stunning birds of prey displays, jousting knights, archery, and an immersive trip into the castle’s formidable dungeons.

If you’ve time left after your castle adventure, other places of interest in the surrounding town include the Market Hall Museum (with displays of geology, natural and town history), and The Museum of the Queen’s Royal Hussars – Churchill’s Own, while the adjacent town is Royal Leamington Spa.

How to get there: Direct trains from Birmingham Snow Hill take around 45-55mins.

Why visit? The birthplace of The Bard himself, the town is a shrine to all things William Shakespeare, with several properties, under the banner of the Shakespeare Birthplace Trust, exploring life during the playwright’s time.

Among them are Anne Hathaway’s Cottage (childhood home of his wife), New Place (the site of the house where William passed away in 1616), and his childhood home, Shakespeare’s Birthplace – which was purchased in 1847 after a campaign supported by Charles Dickens, and others, to save the building from collapse.

Elsewhere around the town you’ll find a Tudor Schoolroom, Holy Trinity Church (where William and Anne are buried) and the immersive Tudor World. The Royal Shakespeare Theatre, on the banks of the Avon, is where RSC continue to breath new life into Shakespeare’s work, often starring some of the most accomplished acting names around, with productions across several spaces.

Children will love a trip to Stratford-upon-Avon Butterfly Farm, billed as ‘the UK’s largest tropical butterfly paradise’, or the Mechanical Art & Design Museum.

And just a few miles away is the National Trust’s Charlecote Park. A grand country home decorated in a Victorian style on the banks of the Avon, it’s set within 280 acres of picturesque parkland.

How to get there: Regular trains from Birmingham New Street to the central Worcester Foregate Street and Worcester Shrub Hill (just a few minutes walk from the city centre). Journey times vary from 40mins to around 70mins.

Why visit? A cathedral city, building commenced on Worcester Cathedral in 1084, though the city has home to a bishop since the seventh century.

Overlooking the River Severn, the imposing cathedral is home to the tomb of the unpopular King John (brother of Richard The Lionheart, and villain of every Robin Hood story), and Prince Arthur’s Chantry (Arthur was the son of Henry VII, who died aged 15, just a few months after marrying), as well as St. Wulfstan’s Norman Crypt, medieval cloisters, and magnificent Victorian stained glass.

Other places to visit in the city include the Museum of Royal Worcester, where you’ll find the world’s largest collection of Worcester porcelain (which was made in the city from 1751 to 2008), and The Commandery, a Royalist HQ during the English Civil War’s pivotal Battle of Worcester.

The gallery’s latest temporary exhibition is The Magic Of Middle-Earth, which is dedicated to the work of Lord of The Rings author JRR Tolkien, who grew up in Birmingham, and includes over 200 items, from first edition books and fantastical paintings, to models, that explore his continued legacy.

Elsewhere, The George Marshall Medical Museum records some 250 years of health care and medicine, while Greyfriar’s House and Garden and Tudor House Museum offer glimpses into an older Worcester.

And if the weather’s nice, a wander along the River Severn is a pleasant way to pass the time.

How to get there: Direct trains from Birmingham New Street take about an hour-an-a-half.

Why visit? West of the Malvern Hills, Hereford rests on a loop of the River Wye. The impressive cathedral is notably home to the Hereford Mappa Mundi. Dating from around 1300, it stands as a remarkable record of the world – and how people saw that world – during the 14th century.

A map drawn on a single sheet of calf skin (vellum) and measuring 1.58m by 1.33m, it has Jerusalem at the centre of the world, with 500 drawings depicting major towns and cities, events, wildlife (both real and fictional) and peoples. The map is displayed alongside over 200 illuminated manuscripts and over 1,200 early printed books.

The cathedral also owns a 1217 revision of the historic Magna Carta. Translating as The Great Charter, the document is considered to be the foundation of English common law.

Other places to visit in the city include the Black And White House (aka The Old House), a Jacobean timber-framed house that tells four centuries of local history. A former saddlers, fish and hardware shop, and later bank, it was transformed into a museum in the inter-war years.

A centuries-old site for fishing, boating and swimming, the riverside garden is filled with wildflowers, and a fine spot for a quiet picnic.

08/01/2022 Travel Comments Off on In Birmingham for the Commonwealth Games? Visit these Midlands gems nearby
Recent Posts