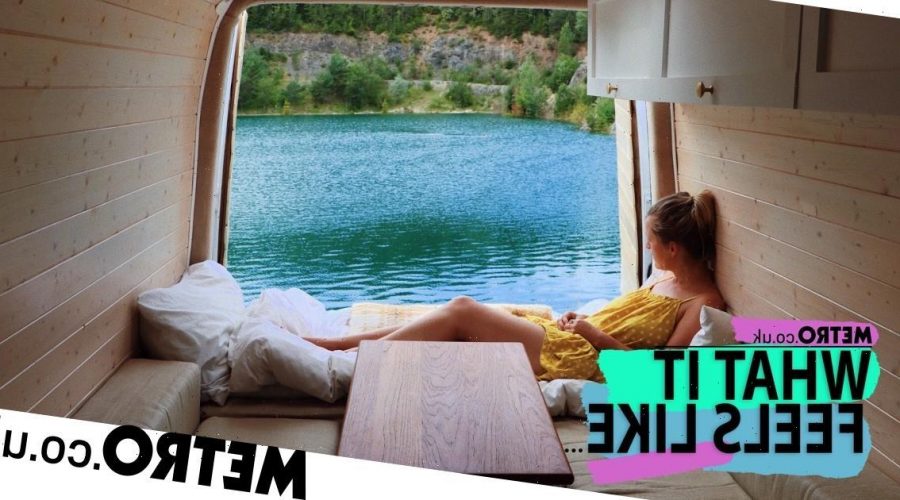 ‘I’d like to buy a van, convert it and go travelling for a year’, my partner Rupert said with the same tone as if he’d just told me we’d just run out of milk.

It seemingly came from nowhere – although the endless research he was doing about van life should have been an indication this was where he was heading. But still, I was unsure why he wanted to give up everything we had built for a life on the road.

We were living comfortably in Winchester, Hampshire. We rented a two-bed flat in the city centre, were both dedicated to our careers, and had built a wonderful social circle. I felt settled and happy.

So not only did this feel as if it had come from out of the blue but it also felt like a pretty big decision for us to make.

I won’t lie, it took more than a little persuading. I’d been building my own business for 12 months and my hard work was finally paying off. However, Rupert is a solicitor and my hesitance was no match for his rational, reasonable powers of persuasion.

I’d worked abroad before, travelled a lot and moved to a new city for a job, whereas Rupert had always been local and career-focused – it felt like we had switched personalities with Rupert using my own mantra of ‘life is too short’ against me.

But, his points made sense: this would probably be the only time we’d be able to take this kind of risk, with no children or responsibilities to consider.

In June 2019 we started the search for our van. We spent hours trawling second-hand van centres to find the right one for our adventure, and slowly it dawned on me what we were getting ourselves into.

I hauled myself up into dark, smelly, work vans and wondered how on earth we would make something this manky a liveable space when, so far, our DIY skills sat firmly within the confines of Ikea flat-packs and lots of swearing. 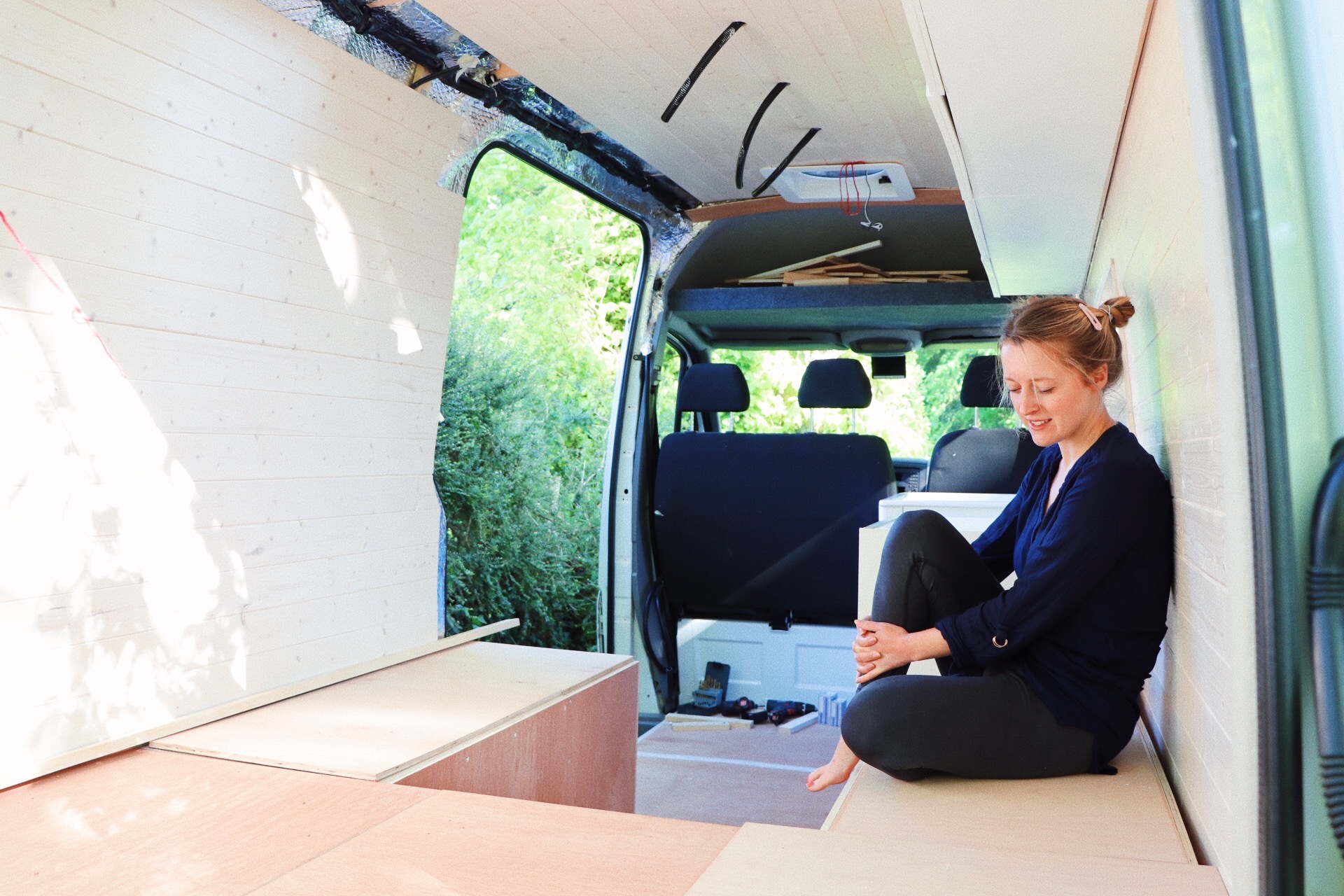 It took us way beyond our expected timeline to find the right vehicle. After three months, we finally purchased our medium wheelbase Mercedes Sprinter for £11,140 including VAT. It was now September 2019 – this pushed us into a winter conversion.

I’ll just say now that YouTube lied to us. When you watch van conversions on there, people are knocking up builds in a matter of weeks – you should know that this is not reality. Everything goes wrong. Nothing is as easy as it looks and screwing up can be costly.

We entered cold, dark, freezing weather with no workshop to shelter us. We spent hours wrapped up in thick layers of clothes, our hands freezing cold trying to scrape sticky sealant from the floor of the van or sawing timber frames with just a small battery-powered torch for light.

Most van builders will tell you the same: some days you love it, some days you despise it. It’s a huge undertaking but one thing I took from it was we made a great team, with but a few disagreements and both of us taking it in turns to cheer the other one up after a particularly rubbish day.

We started by stripping the van from top to bottom and insulating it with insulation boards and recycled plastic bottle insulation, finished with a vapour barrier over the top.

We added sound deadening and then the wooden structures that became the base of our floor and the general layout.

We built every single inch of the van using YouTube tutorials and the occasional FaceTime call to family members for guidance, while Rupert installed our entire electrics.

We fell in love with our van, which we named Minnie. She was our way to escape and adventure, and we wanted her to become a home away from home.

Our trip was due to start in April 2020 but in March, having moved out of our flat three days before and poised to book our ferry tickets, the announcement was made: the UK was in total lockdown. Covid.

Rupert had already quit his job and was working his three-month notice. We had already moved out of our flat (with all our belongings in storage). With the new lockdown announcement, we moved into Rupert’s parents’ home with no idea that we would be there for more than a few weeks.

However, for those first few months of lockdown, the van wasn’t our main concern; every day as we watched the news and saw the numbers of cases and deaths rising, we were so grateful our loved ones were all well and safe.

Eventually, in June 2020, restrictions were lifted and it seemed like everything was going back to normal (remember that?!). In a matter of days, we booked our ferry and drove to Plymouth, arriving in Roscoff, France 16 hours later for our Big Adventure.

It had been a year since we first started looking for our van. I remember as we drove it over the threshold to the ferry, looking at Rupert and just seeing his huge, excited grin. I was so proud of us.

Adjusting to van life was easy for us but I often wonder if that was the case because we were so relieved and grateful to finally be fulfilling this dream.

As a couple, we loved living together in the small space. I love my own company and Rupert would often go for huge long hikes so we had some time to ourselves, which I think was vital to us not falling out.

Our van isn’t the most basic, but it is close. We have a separator toilet (essentially, two purpose-made buckets under a toilet seat that has one large gap filled with sawdust for your poo and toilet roll, and another for your pee only), no shower and no hot water.

Before Covid, we had planned on using public showers but we decided against that as we travelled. We mostly washed in the van, or occasionally we’d pay for a campsite and have a hot shower there.

I found a new hobby in wild swimming (you haven’t embraced the chill of wild swimming until you’re the only mad person in the Baltic Sea in the middle of a rainy October day!).

We quickly found a good routine of moving on every day or two, creating a rough week-to-week plan of where we wanted to go.

From France, we went to Luxembourg and then on to Germany where we were hit with a wall of 36°C European heat. With no air con or showers in the van we decided to skip through Germany and drive to Poland to escape the heat.

From there, we made our way to Slovakia, where we spent a few days embarking on long hikes and drinking vodka at the top of mountains watching Golden Eagles soar overhead.

Next was Austria where we had our first (and thankfully only) encounter with police, who banged on our windows as we were fast asleep. We were staying overnight in an industrial car park just outside Vienna when they demanded we move on.

We drove almost two hours to another park-up – annoying, but on the plus side, we woke up to the most amazing view of the countryside tumbling down from a huge vineyard.

From Austria, we went to Italy where we roamed the winding empty streets of Venice, ate the most delicious focaccia in Florence and marvelled at Michelangelo’s David, without the hordes of crowds it was accustomed to.

In October 2020, while enjoying Italy, we began to feel Covid closing in on mainland Europe again with reports of border closures and curfews coming in thick and fast from Germany, France and Spain.

We decided that instead of locking down in Italy, we would make a mega marathon drive to Spain and then down into the Valencia region where our family were, so we’d safely be with them in time for Christmas.

What we didn’t realise was that we would be restricted to the Valencia region for two months, meaning that our original plan of heading to Croatia was completely scuppered.

Brexit restrictions mean that British passport holders can only spend 90 out of every 180 days in the Schengen area, which covers the main countries in Europe. We had no choice but to return to the UK in March, as our 90-day clock had started ticking on 1 January 2021.

That ferry crossing back home was a mixture between sadness and also excitement to see our family again, after almost a year.

We spent a few months travelling around when back, heading to Devon and Cornwall and spending a month or so in Wales. But this country isn’t really equipped for campers in the way that mainland Europe is – plus, being in the UK felt too close to reality with friends and family going about their lives and us still living in a van.

It sometimes feels like two worlds that don’t quite meet in the middle.

Rupert has since taken a job as an in-house law counsel and I’ve been working since we returned to the UK, taking on clients and building my business back up again.

It’s hard not to be tempted to take Minnie back over to mainland Europe again, especially when we see friends we met on the road back out there travelling.

But Minnie remains our greatest adventure and I’m thankful we have our little home on wheels.

Since embarking on our van life journey we’ve both learned to slow down, embrace life and appreciate what you have.

I just don’t think we’d ever do another van conversion again!

In this exciting new series from Metro.co.uk, What It Feels Like… not only shares one person’s moving story, but also the details and emotions entwined within it, to allow readers a true insight into their life changing experience.