Dodging minefields, armed escorts and a climb ‘tougher than going up Everest’: An extraordinary account of how a Welsh and American team conquered Afghanistan’s highest peak

As tough climbs go, there are few more gruelling than getting to the top of 24,580ft (7,492m) Mount Noshaq – the highest mountain in Afghanistan.

It’s something that Welshman James Bingham discovered when he led a part Welsh, part American, team up it. The ultra-marathon runner and expert mountaineer summited Everest in 2007 – but said Noshaq was ‘tougher’.

But despite the physical exertion and the fact that getting to the remote mountain was a risky business – the 45-year-old father of two had to dodge minefields and travel with armed guards in case of encounters with the Taliban – he told MailOnline Travel that the 2010 trip was ‘the greatest adventure of my life’. And incredible images from the expedition show just what an epic odyssey it was. 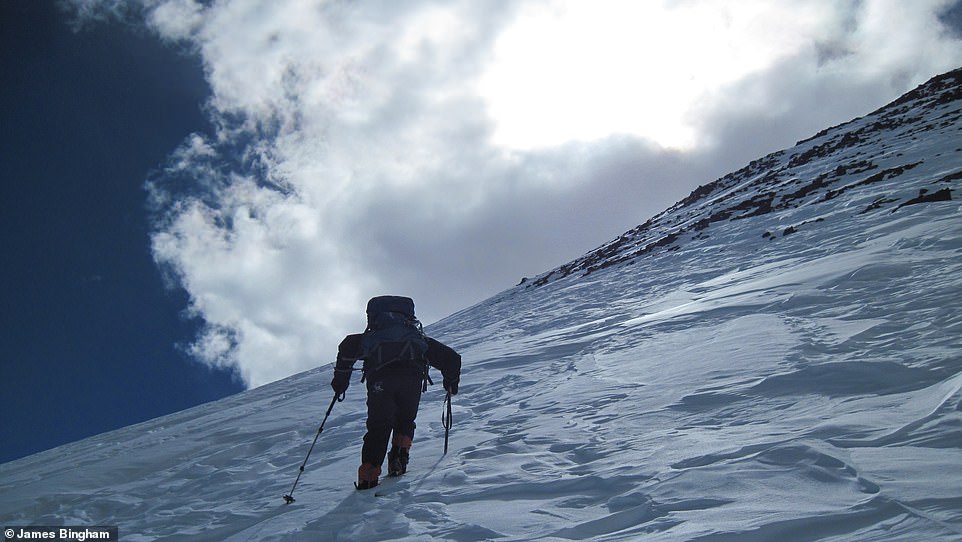 British adventurer James Bingham ventured to Mount Noshaq in Afghanistan in the summer of 2010. It is the country’s highest peak at 24,580 feet (7,492m). Above, Bill Lyden carries a heavy load towards a higher camp on the peak, battling steep icy slopes and high altitude 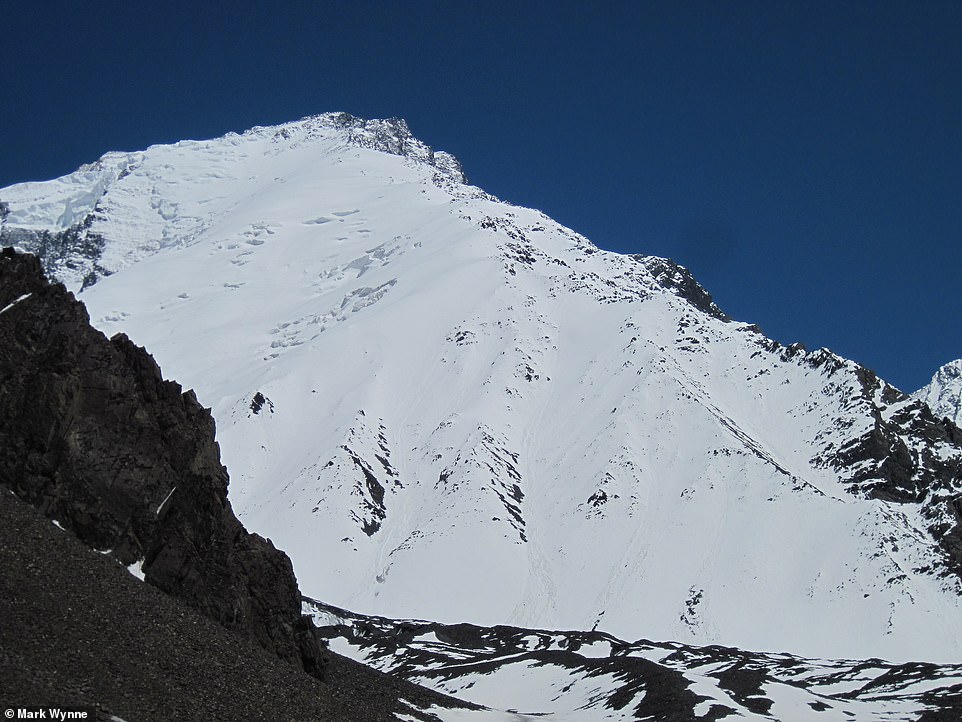 A photo of Mount Noshaq taken from the climbers’ basecamp at 15,255 feet (4,650m). The route they took followed the ridgeline on the right-hand side

James with his climbing party, which included his three friends – Welsh compatriots Quentin Brooksbank and Mark Wynne, and Bill Lyden from Alaska – local porters and an armed Afghan escort 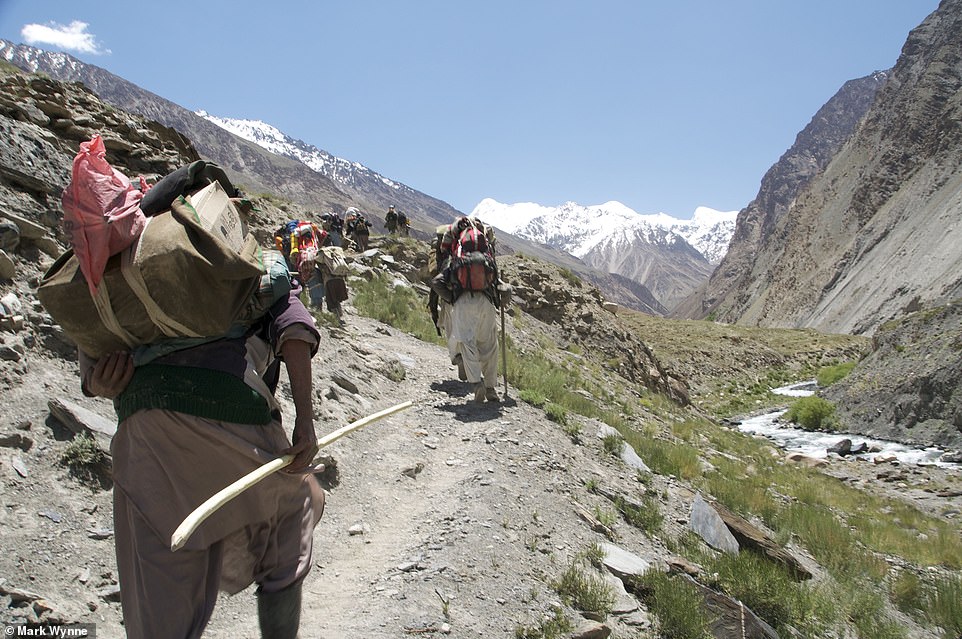 James said this photo brings back brilliant memories of trekking up towards basecamp on the second day of the expedition. He remembers the heavy loads not so fondly

London-based James, who grew up in Rhosneigr on the south-west coast of Anglesey, originally got the idea to climb the mountain after a similarly adventurous old school friend from the Welsh island, Quentin Brooksbank, texted him suggesting that they go and explore the Hindu Kush range, where Noshaq is located.

Initially, James was apprehensive about travelling to Afghanistan as he ‘assumed it was far too dangerous for Westerners to visit at that time in 2010 given everything that was going on and the ongoing conflict’.

But the more research he did about Afghanistan, the more his confidence grew.

He told MailOnline Travel: ‘I had concerns initially, but the situation in Afghanistan wasn’t quite what I thought.

‘In the weeks and months leading up to the expedition, we read lots about the region surrounding Noshaq and discovered that a handful of intrepid adventurers had travelled to the area, including a small group of French mountaineers who climbed the mountain the year before. 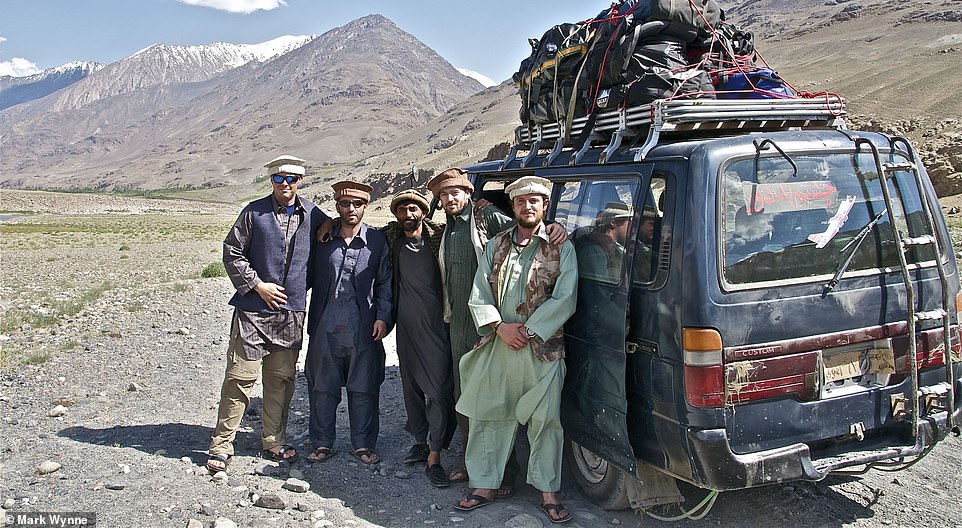 The climbing team (James, second from the right) pose for a photo before making their way to the Afghan village of Qazi-Deh. Everyone had to pack into one vehicle for a long and bumpy ride on unsurfaced roads 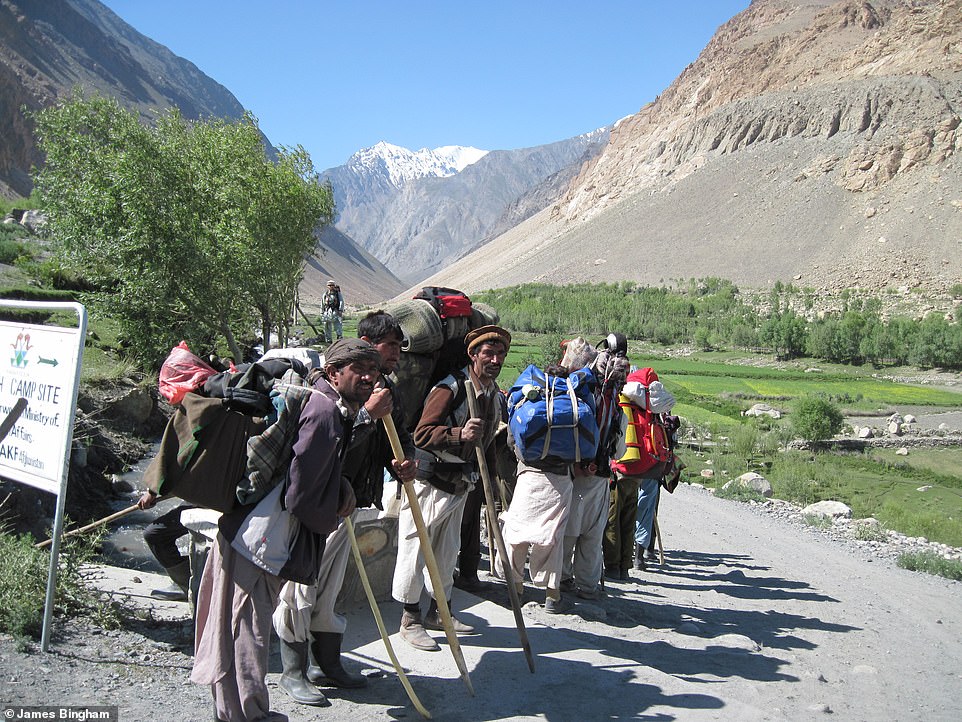 Local farmers helped carry the team’s loads to basecamp. The above photo was taken on the first day of the climbing expedition as they left Qazi-Deh. The mouth of the valley leading to Mount Noshaq can be found 1.2 miles (two kilometres) east of Qazi-Deh 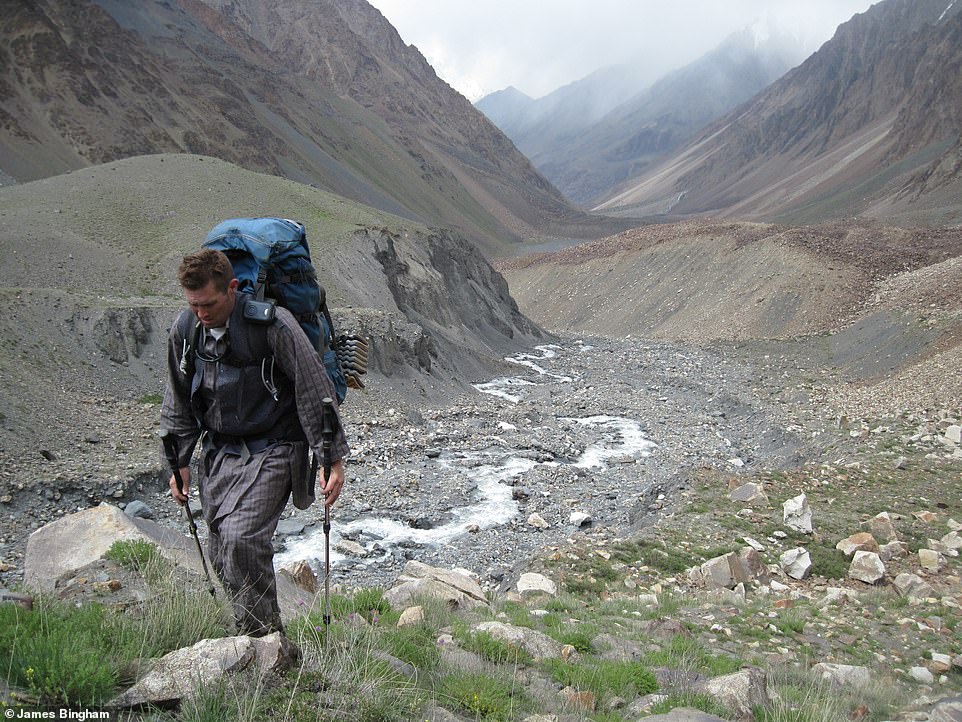 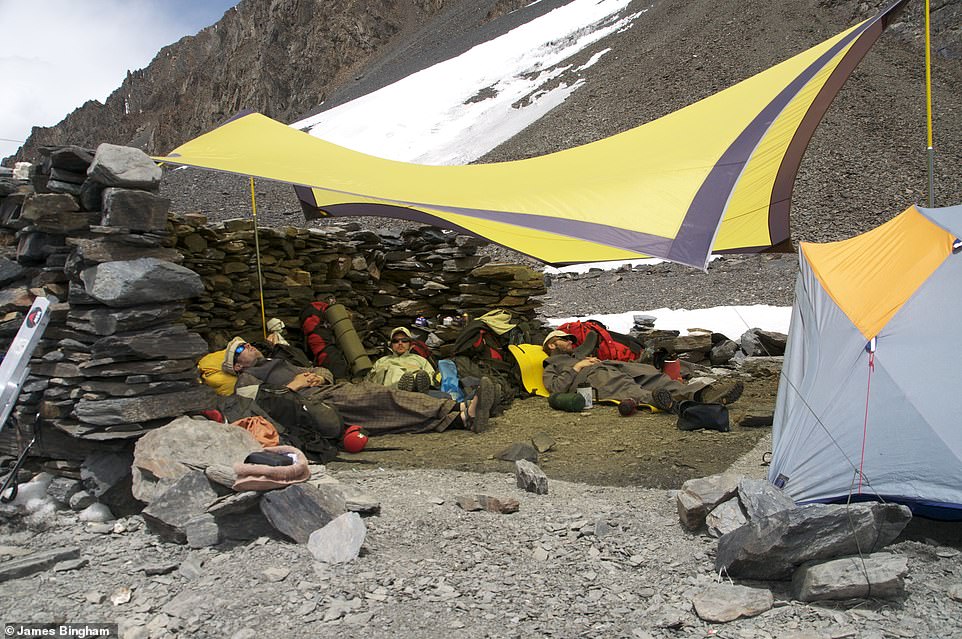 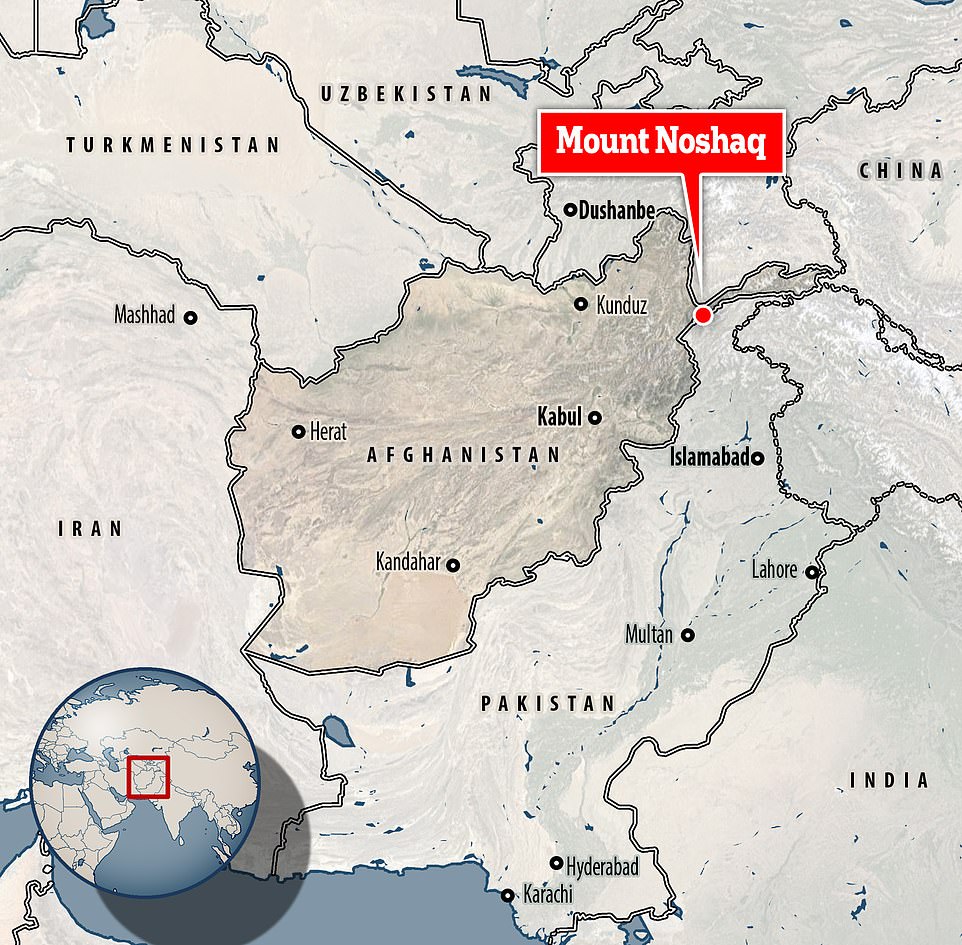 James and his team reached Mount Noshaq by flying to Dushanbe, the capital city of Tajikistan, then enduring a ‘bone-rattling’ two-day jeep drive through Tajikistan to Afghanistan

‘After some deliberation, we threw caution to the wind and decided to go.’

There were four men in the climbing team – James, Quentin, fellow Welshman Mark Wynne and Bill Lyden from Alaska – and it would be the first British-led expedition to attempt an ascent of Noshaq since the Soviet invasion in 1979.

To reach the remote mountain – which lies in the northeast of Afghanistan, on the border with Pakistan – the daring quartet took a direct flight from London to Dushanbe, the capital city of neighbouring Tajikistan.

From there, they endured a ‘bone-rattling’ two-day jeep drive through Tajikistan to reach a remote border crossing at Ishkashim, a town in northeastern Afghanistan. They dressed in traditional Afghan apparel – tunics, loose trousers and hats – before they reached the mountain so they blended in.

Explaining this choice of route, James said: ‘This meant we arrived in Afghanistan at a point remarkably close to the mountains we hoped to climb.

‘It also significantly reduced road travel within Afghanistan, which was sensible given the security concerns in some areas.’

The expedition team was only allowed to climb the mountain after accepting an armed escort from the commander of the police in Ishkashim. 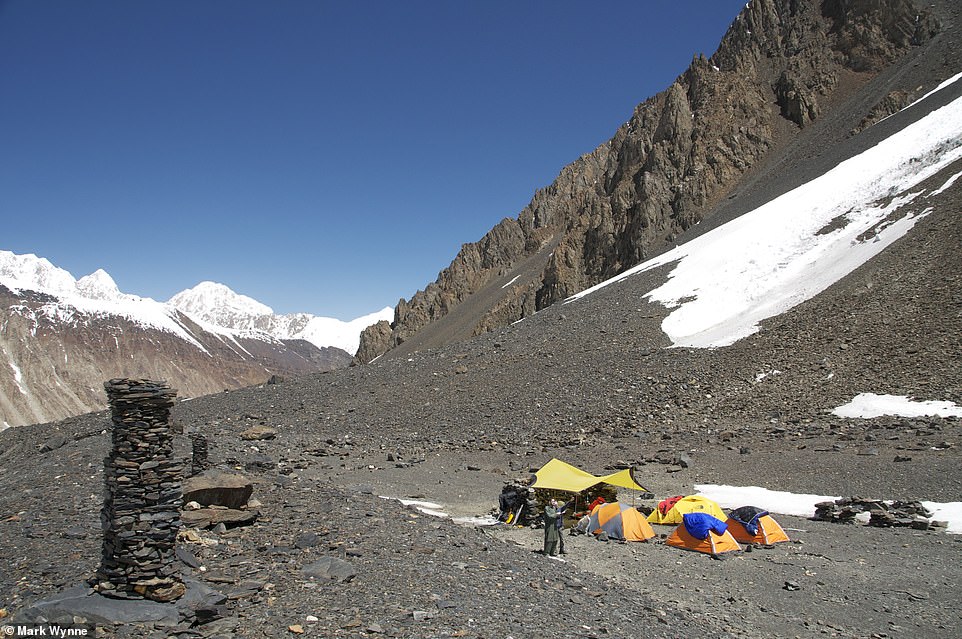 A photo of the team’s basecamp at 15,255 feet (4,650m). Two of the team – James and Quentin – stand in the sun while studying route options up the mountain 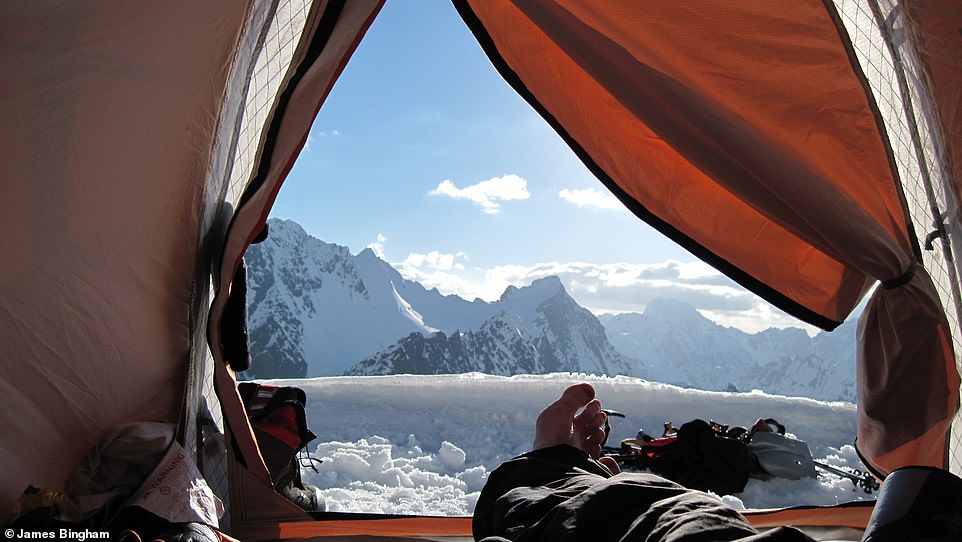 A view from James’s tent door of the snow-wrapped peaks stretching out before him. This shot was taken at camp two on the mountain at 20,341 feet (6,200m) where the team took time to acclimatise to the high altitude and rest 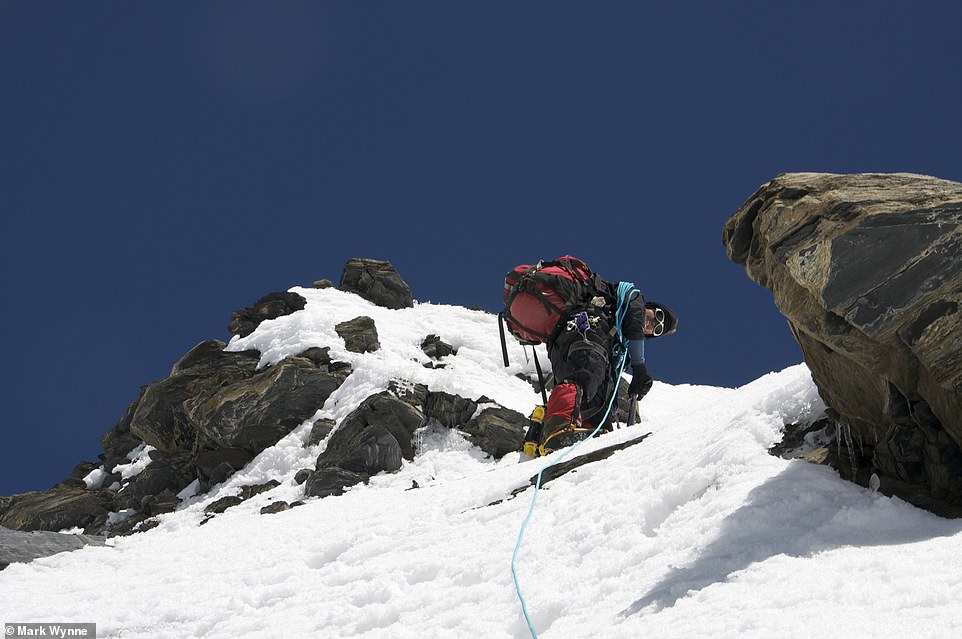 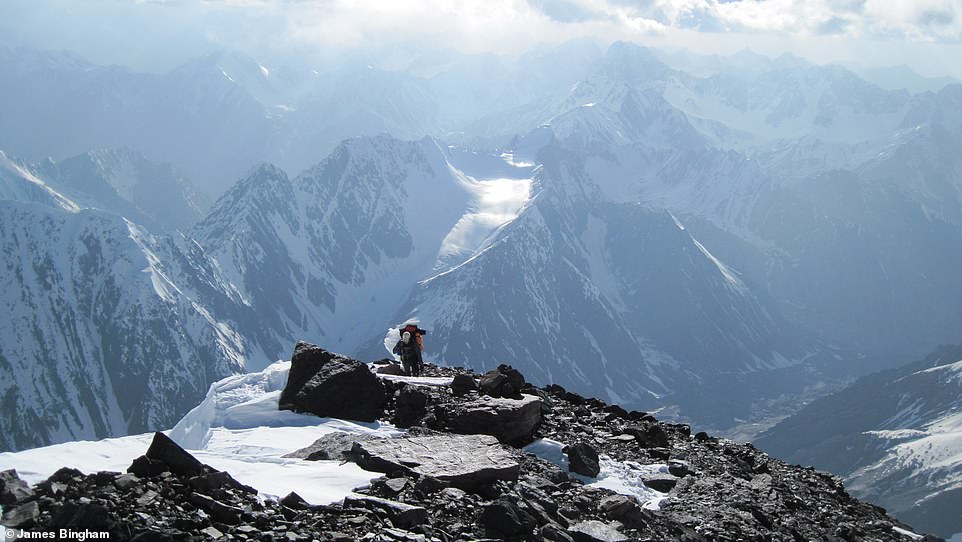 Mark reaches the crest of a ridge after a long day load-carrying. Basecamp was a few thousand feet below this point

The commander was worried that the expedition planned to pass close to the Pakistan border, where he said there was suspected Taliban activity.

It was agreed that if they took on security, they would be granted permission to climb the mountain, so four armed soldiers travelled with them on the three-day trek to basecamp and helped guide the team clear of minefields, a legacy of the Mujahideen’s nine-year war with the Soviet Union.

James and his team also hired some local farmers who were keen to earn some extra money by carrying bits of kit.

Before they set off and pushed for the summit, James and his team spent many days climbing up and down to various lofty points on Noshaq to acclimatise to the high altitude.

During this time, the climbers established four camps for their ascent and two for their descent.

James noted that the group had to be ‘self-reliant’ as Noshaq is so remote that climbing infrastructure is non-existent. If anything went wrong, there would be no rescue available.

When they felt ready, the mountaineers set off on what proved to be a gruelling trek.

Recalling the expedition, James said: ‘Conditions on the mountain were tough at times. 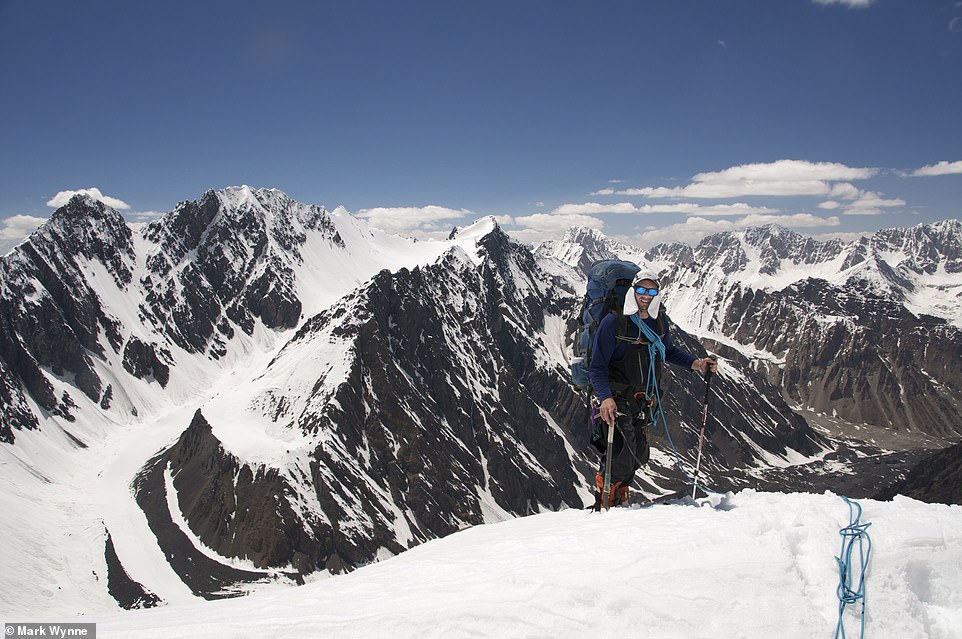 Bill poses for a photo on a bright sunny afternoon, with the majestic Hindu Kush lording it in the background 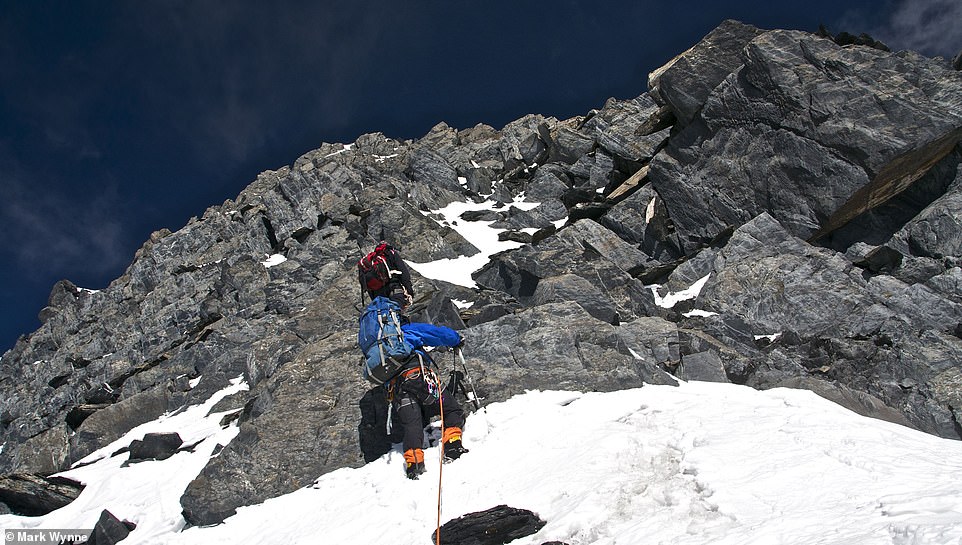 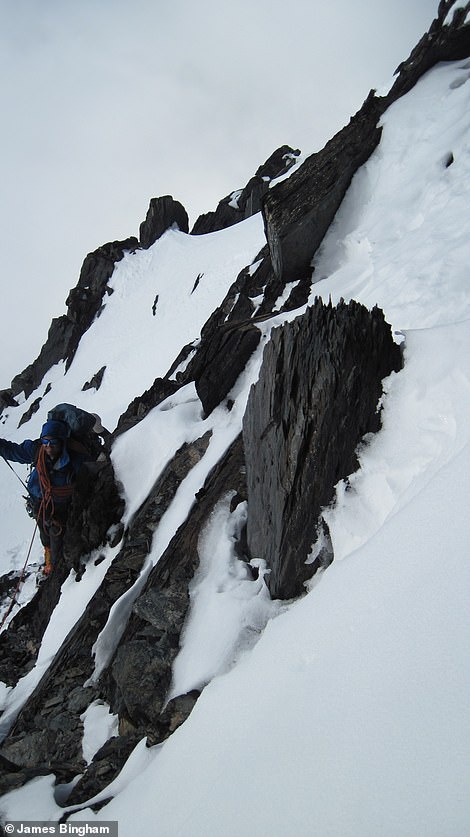 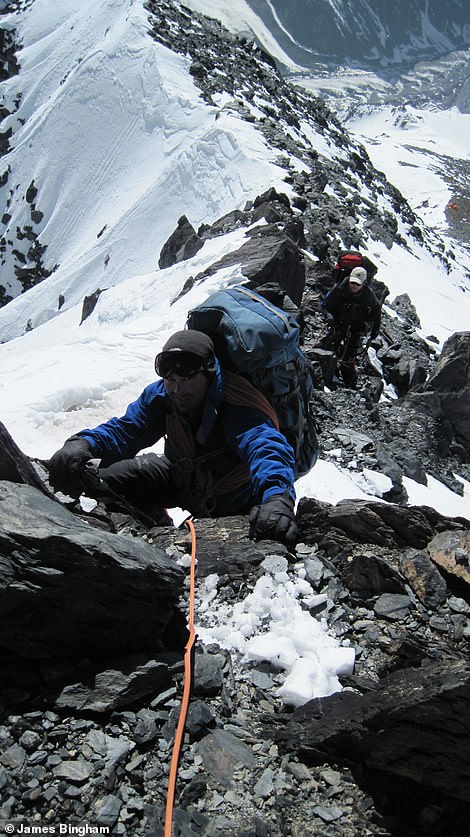 The picture on the left shows Bill navigating a near-vertical section of snow and rock at around 19,685 feet (6,000m). On the right, Bill (foreground) and Mark clamber along a rocky ridgeline 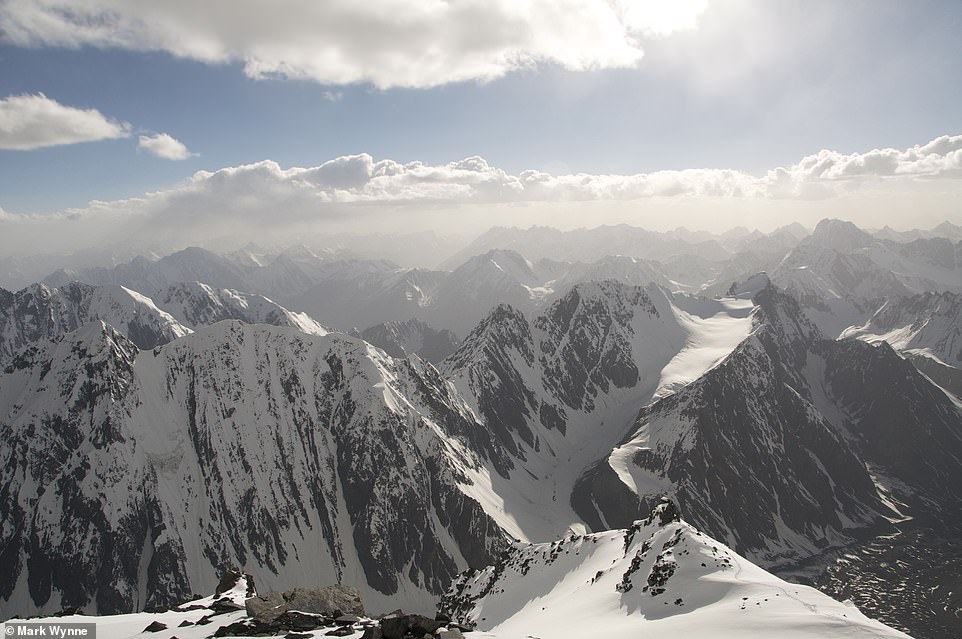 James noted that the group had to be ‘self-reliant’ as Noshaq is so remote that climbing infrastructure is non-existent. If anything went wrong, there would be no rescue available 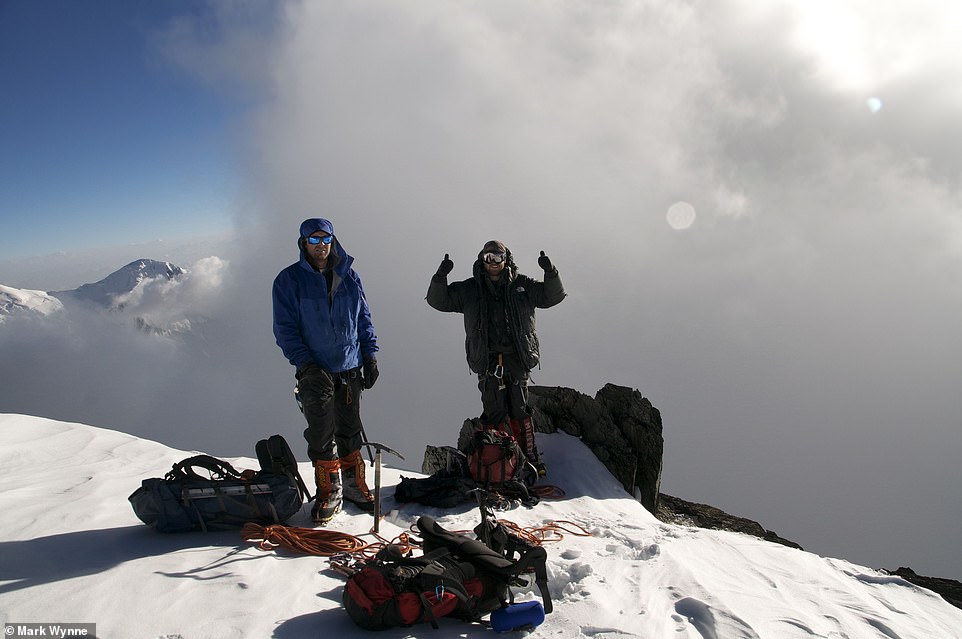 ‘Higher on the mountain we encountered waist-deep snow, whiteouts and a couple of storms.

‘The rock was very brittle and it was hard to make good anchors for climbing safely.

‘Then on the supply side of things we ran low on food in the later stages of the climb and a broken stove meant we couldn’t drink for a couple of days, but we got there in the end.’

James and his team weren’t rewarded with much of a view, but the moment they made the summit was a joyous one nevertheless.

James said: ‘We had thrown everything we had to reach the summit of the mountain. We were physically pretty broken by that point and really felt the effects of the altitude. It was harder than climbing Everest as we’d had no support at all after basecamp and this meant carrying large loads up and down the mountain over several weeks.

‘In a sense we were surprised to reach the summit as at times it felt we would never make it. But somehow against the odds we did. It was a wonderful feeling and I was so proud of my teammates and friends who had been rock solid throughout the expedition.’

On reflection, James said that one of the most magical aspects of the trip was that they ‘didn’t see another soul for the duration of the three-week expedition, which is unusual on most big mountains these days’.

Also memorable were the ‘spectacular, jaw-dropping, incredibly remote views’ on the way up.

Despite it being an ‘incredibly challenging expedition’ James said his visit to Noshaq ‘remains the greatest adventure of my life’.

He explained: ‘As well as seeing the stark beauty of the landscape, I think we all fell in love with Afghanistan and most importantly the country’s generous people, who treated us so well.’ 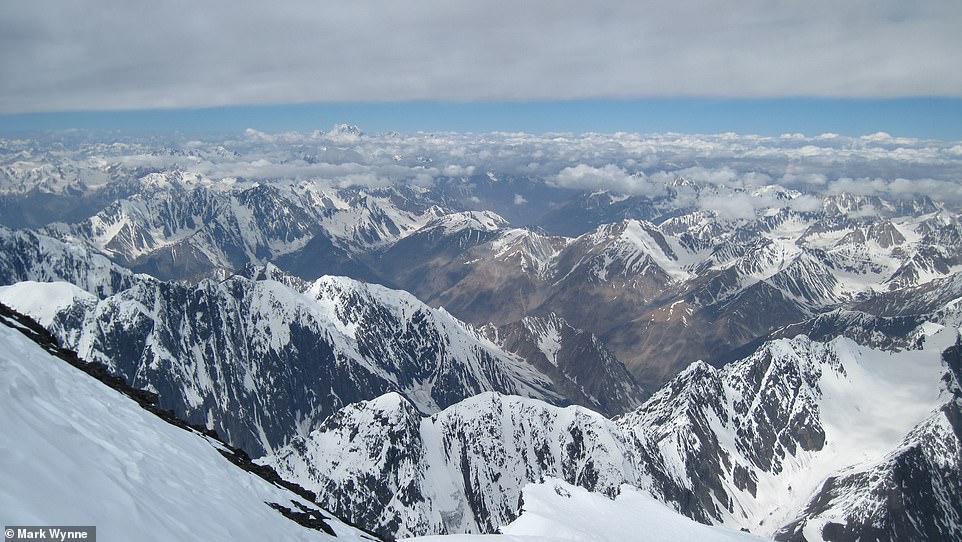 A stunning shot taken at around 21,325 feet (6,500m) showing views over the Pakistan border 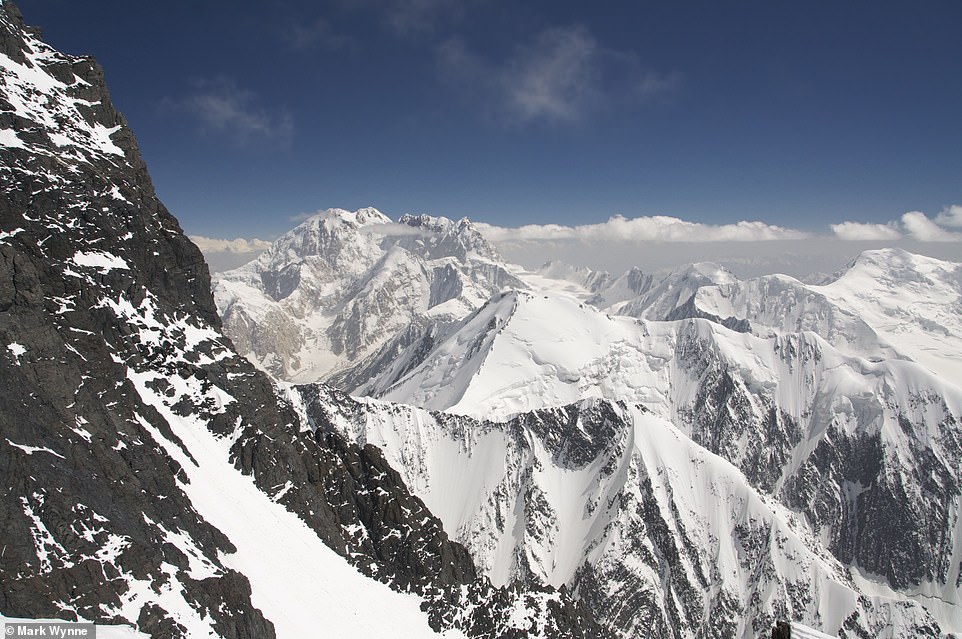 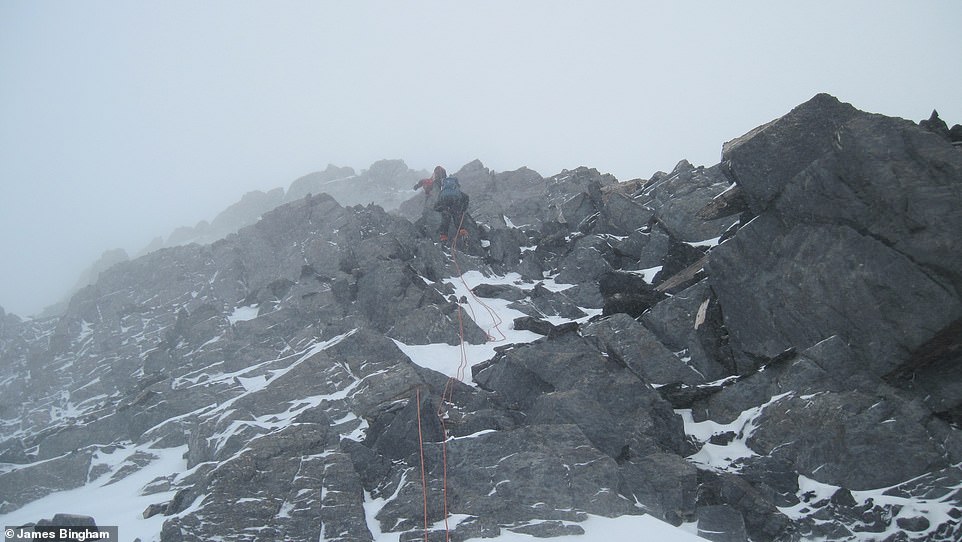 Higher on the mountain, James said the team encountered ‘waist-deep snow, whiteouts and a couple of storms’ but they managed to see the bad weather out to reach the top 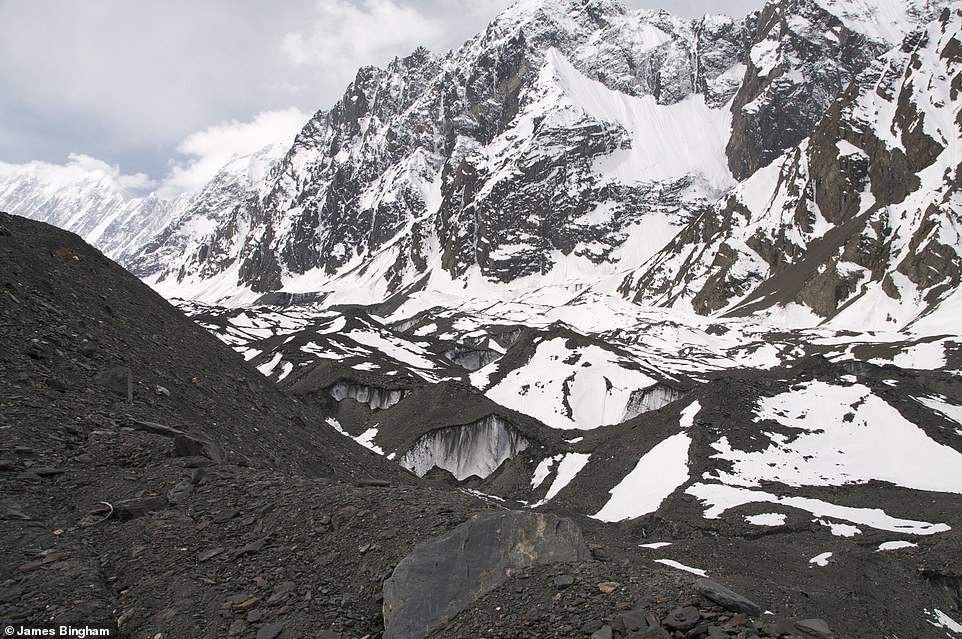 A photo showing the icy, almost otherworldly, terrain around the team’s basecamp 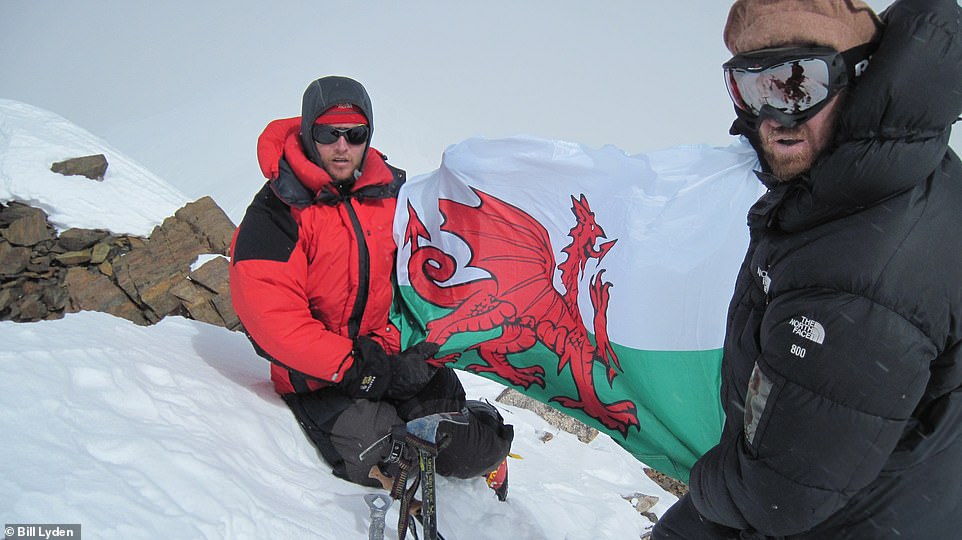 Mark and James on the summit of Noshaq, at 24,580ft (7,492m). Mark and James are school friends from Anglesey and, as this image shows, they packed a Welsh flag 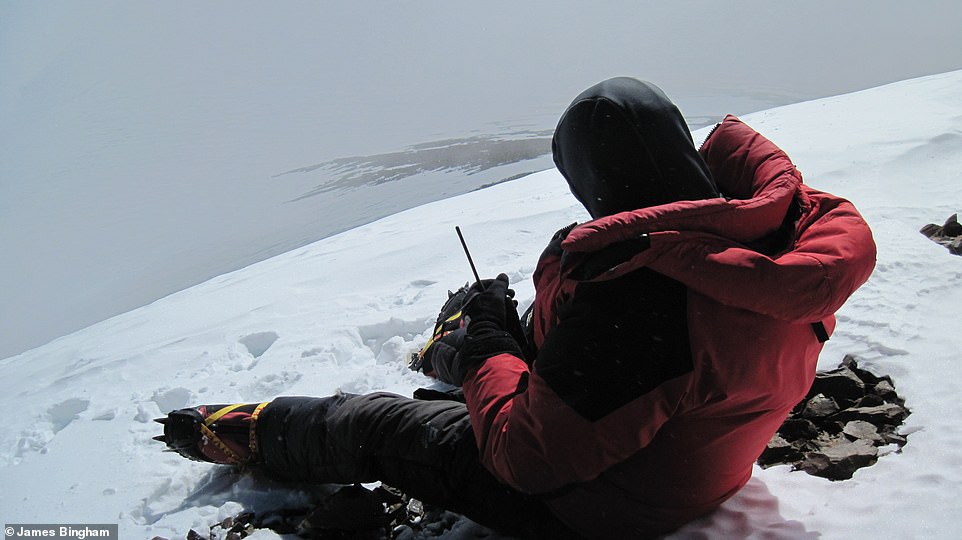 Mark radios back to basecamp, confirming to Quentin that the team had made the summit and were OK. Quentin had remained at basecamp after struggling to acclimatise 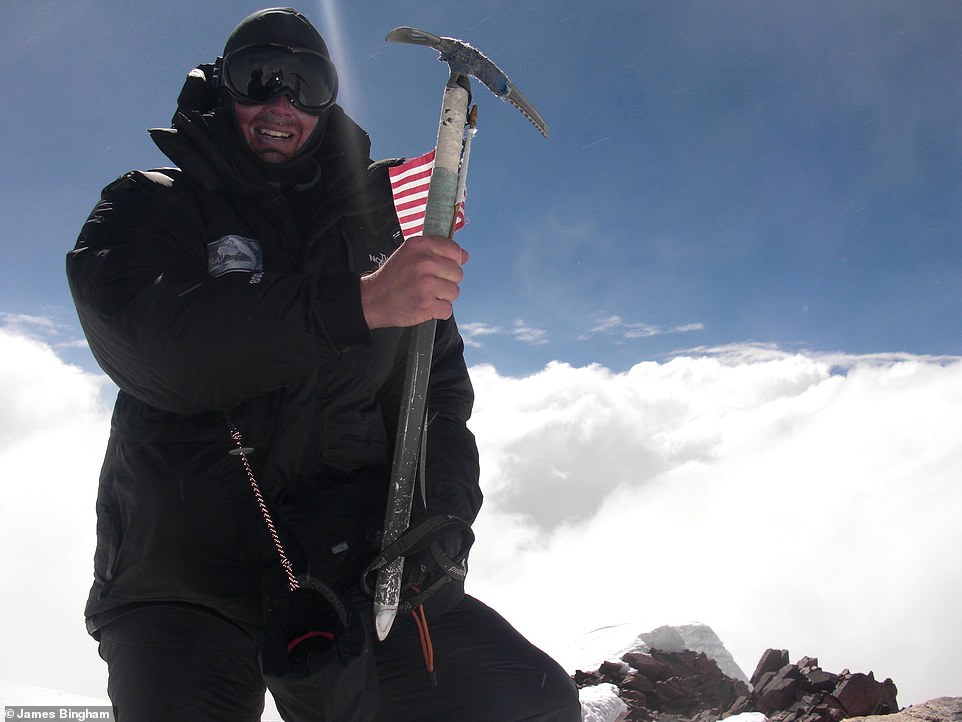 Bill, who’s from Alaska, on the summit of Noshaq. This was his first expedition outside the USA 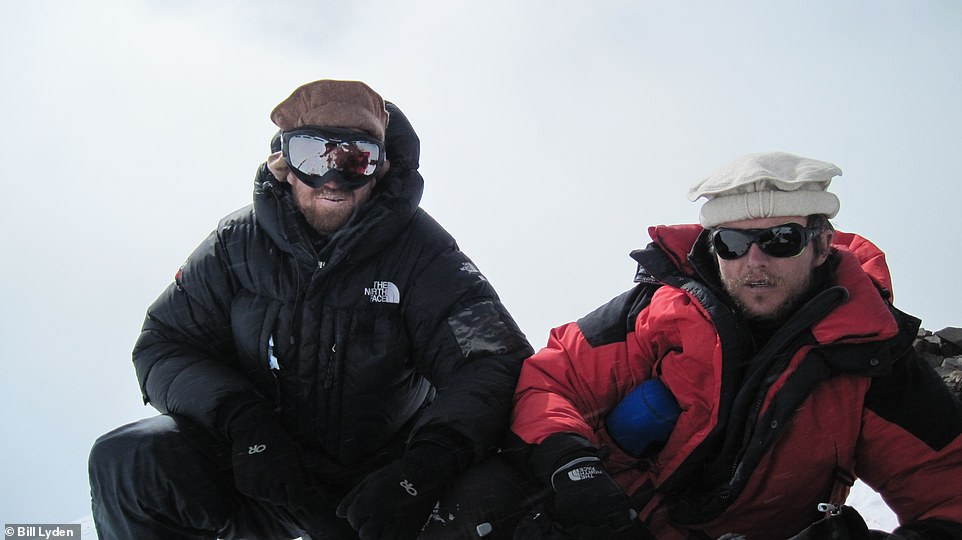 James and Mark on the summit of Noshaq. James said: ‘We were both totally broken and suffering from the effects of the high altitude. At the same time very proud that we had managed to reach the summit’

After his first trip to Afghanistan, James has returned many times to climb and explore other regions.

In 2015, he helped set up The Marathon of Afghanistan, the first international marathon to take place in the country and now an annual event.

James’s hope is for more Afghans to take up mountaineering, a sport he said is slowly gathering momentum.

Perhaps some there will be inspired by news just in that a group of compatriots has just become the first all-Afghan team to conquer Noshaq.

James relayed the news to MailOnline Travel that the team of nine – six men and three women – all made the summit.

They said it was ‘incredibly hard’, he reported, and they underestimated how tough it would be. But ‘working as a team’ they eventually made it.

James added: ‘I hope they experienced the joy I did back in 2010 on the slopes of Noshaq.’

James Bingham’s ventures: He is Race Director of 135-mile ultra-marathon Ring O Fire, co-founder of The Marathon of Afghanistan and recently established the Afghan Sports Trust, a new charity that raises money to help fund grassroots sporting organisations in Afghanistan.

08/14/2020 Travel Comments Off on How a Welsh and American team conquered Afghanistan's highest peak
Recent Posts
We and our partners use cookies on this site to improve our service, perform analytics, personalize advertising, measure advertising performance, and remember website preferences.Ok