The Fairlane occupies a former bank building in downtown Nashville that dates back to 1973, so perhaps it is not a total surprise that when the New York design team of Reunion Goods & Services converted the space into an 81-room boutique hotel, they drew inspiration in part from the shagtastic ’70s. The property, owned by the Nashville-based Oliver Hospitality group, opened in March, and is part of a wave of some 5,000 hotel rooms being added to booming Nashville this year. The Fairlane’s modernist highlights include terrazzo floors, original oak paneling, colorful seating areas in the lobby and a Scandinavian-style fire pit in the penthouse.

Set within Nashville’s Arts District, the hotel stands around the corner from Printers Alley, a storied block for the city’s night life. Saloons filled it until Prohibition, when they were converted to speakeasies, then later to clubs. The present-day music and entertainment in the alley’s lounges can run risqué; at Skull’s Rainbow Room, the “French night” the bar’s doorman mentioned to me turned out to be a burlesque show. On the more wholesome side, the hotel sits not far from the Tennessee State Museum and a few blocks from the state capitol. 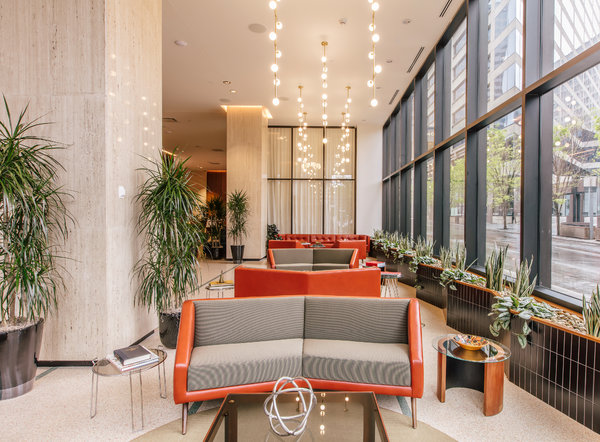 Checking in on a summer Thursday, I was upgraded from a standard to a king-size corner room with dramatic floor-to-ceiling windows (although the massive flat-screen TV blocked a portion of the view). The bed featured a nifty forest-green velvet headboard with a center console that could pull down to hold drinks in its built-in cup holders, or fold up so as not to get between two guests. The room dispensed with art altogether but featured playful touches like built-in magazine racks, a mustard seat cushion, and a mod circular black, white, and gold light fixture hung from its extra-high ceiling.

The full-length windows extended into the bathroom, although the toilet was thankfully tucked into the corner farthest from the exposing glass. The shower featured sheer peekaboo panels into the room within its Nicaraguan-walnut paneling — a narrower, more fun and modernized take on the ubiquitous wood paneling of the ’70s. Spacious and simple, the bathroom used white marble on the floor, sink stand and in the shower. Flattering dimmer switches were appreciated. Toiletries were by Five Wits.

The no-prices-listed minibar featured Dickel Tennessee Whiskey and other boutique spirits to drink and habanero pepper-fried pork rinds and Nashville hot chicken crackers to nibble on, along with local artisan chocolate and bourbon-nib brittle from Olive & Sinclair. There was a modest fitness center, which the hotel calls “Jim,” for working off the rich Southern snacks. When I paid a visit, it felt packed with four guests on its two treadmills, one elliptical, one weight machine, and one stationary bike — but push-it-to-the-limit athletes will appreciate that the stationary bike was a Peloton, with access to virtual cycling classes.

Being a Matcha tea drinker, I skipped the lobby’s Union Teller Coffee Counter, although the hotel had given me two coupons for free Stumptown Coffee there. I ordered room-service breakfast from the in-house Montreal-style deli, Mile End Delicatessen. Although it came without the side of fruit I’d ordered, the lox omelet ($17) was warm and creamy. The hotel’s fourth-floor dining room, Ellington’s Mid Way Bar and Grill, was not yet open during my July visit but serves classic American fare and martinis.

Ideal for a traveler looking for a little retro attitude, the Fairlane has fun with its swinging ’70s style.

11/17/2018 Travel Comments Off on Hotel Review: In Nashville, Time Traveling to the 70s
Recent Posts