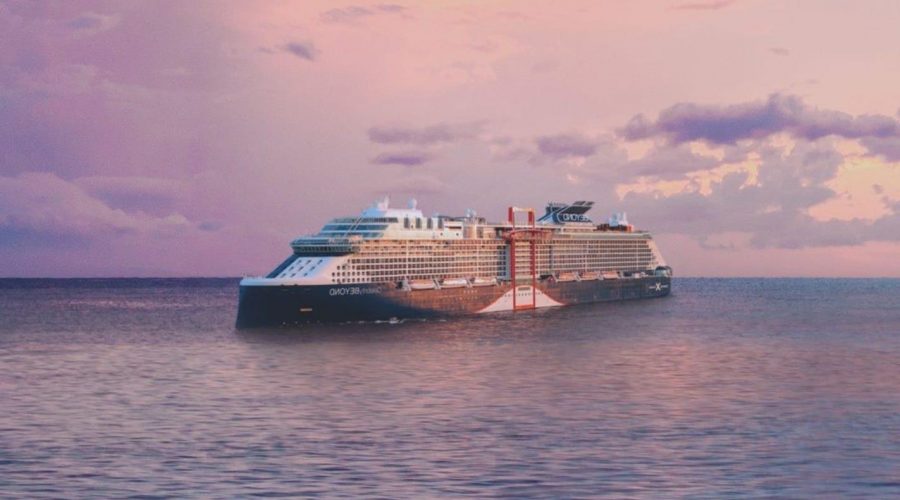 Celebrity Cruises is looking ahead with the unveiling of the cruise line’s newest vessel, the Celebrity Beyond, set to make its debut April 27, 2022 with a sailing from Southampton, England.

The 1,073-foot-long vessel, which will be able to host 3,260 passengers in 1,646 staterooms is the third ship in the Royal Caribbean Group subsidiary’s Edge Series. The collection also includes Celebrity Apex and Celebrity Edge. In total, Celebrity’s fleet will contain 15 ships with the addition of the Beyond.

“Celebrity Cruises has always been an innovator at sea, and now we have challenged the status quo with a vessel that goes beyond expectations, beyond imagination,” said Lisa Lutoff-Perlo, president and CEO of Celebrity, in a release. “Celebrity Beyond shatters any and every preconceived notion of the cruising experience.”

The new ship builds on the features of its Edge Series predecessors, according to the company. One such feature is its main deck, which is expanded by 40% in comparison to the Beyond’s sister ships in the Edge Series. The ship “is beyond anything anyone is going to expect,” Lutoff-Perlo said during a press conference unveiling the ship Wednesday.

“We focused on providing more openness, height and spaciousness throughout the ship’s most popular spaces,” Richard Fain, chairman of Royal Caribbean Group which is the parent to Celebrity, said in a release.

The ship includes features such as “The Retreat,” a space that will be available only to suite guests with a lounge and a two-story deck. And onboard accommodations have special features, too. For example, passengers can book two-story villas with private plunge pools or staterooms with decks overlooking the water.

The Beyond also boasts a rooftop garden and resort deck with pools that project for swimming suspended above the sea; a multi-level bar dubbed the “Sunset Bar;” a Daniel Boulud restaurant; a redesigned “Grand Plaza” to span multiple decks; and the “Magic Carpet,” an open-air moving venue that hovers above the sea and shifts position, much like an elevator, changing purpose based on which of the 13 levels it visits.

Goop founder and actress Gwyneth Paltrow, whose company had planned to partner with Celebrity for an at-sea venture last year before the pandemic struck, was among those who worked on the ship concept.

After the Beyond finishes its first itinerary, a 10-night Western European cruise with stops in Bordeaux, Lisbon Seville, Palma de Mallorca and Barcelona from Southampton, it will embark on Mediterranean journeys. Bookings will open at 3 p.m. ET Wednesday.