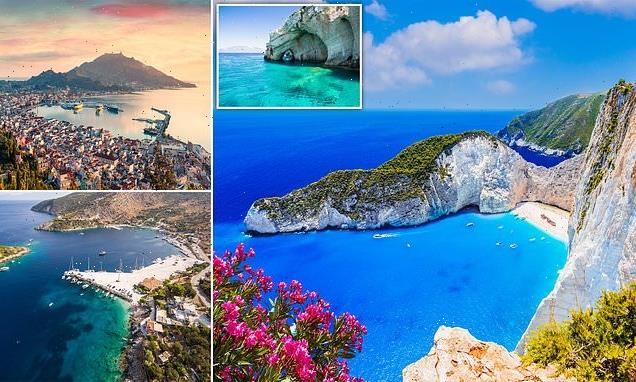 The tranquil Greece you’ve been dreaming of for the past two years: Discovering there’s more to Zakynthos than cocktails and clubbing

As dusk falls in Agios Nikolaos, a small, natural harbour on the tranquil north-east coast of Zakynthos, an unexpected comedy show begins.

Alongside the waterfront terrace at La Storia taverna, a line of inflatable tenders wait to carry their passengers back to the gleaming boats that bob in the calm waters further out to sea. There’s nothing elegant or graceful about clambering aboard a tender, particularly after a good dinner – just lots of wobbling around, with women nervously shifting along as their partners stumble on behind.

No one actually falls in, but the possibility hovers over one tender after another, delivering an irresistible spectacle as we prepare to tuck into roasted sea bream and a carafe of local red wine.

Annabelle Thorpe explores Zakynthos, the furthest south of the Ionian archipelago. To the right in the image above is the island’s famous Navagio Beach 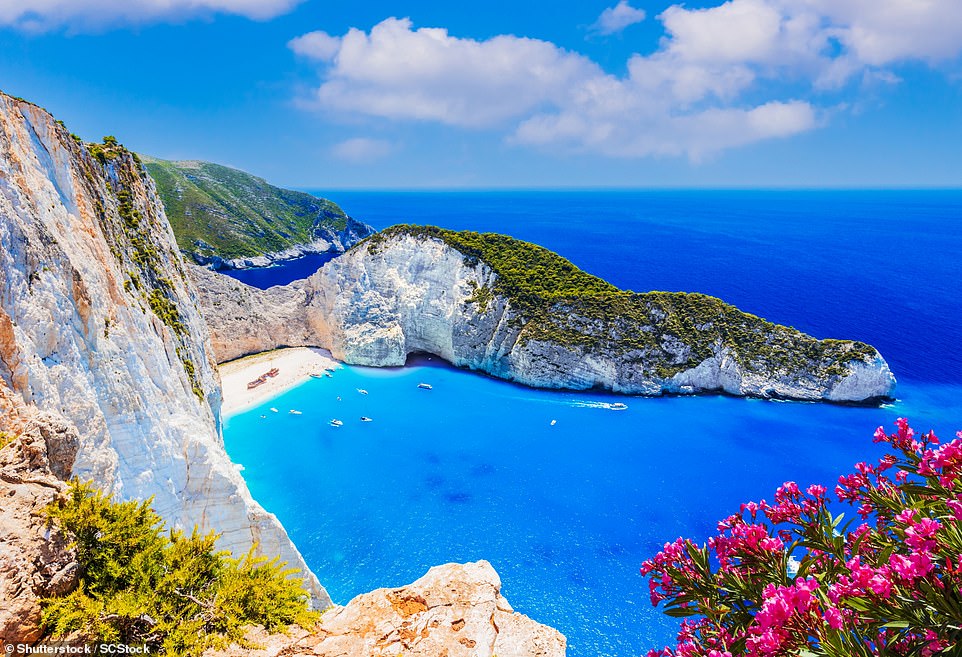 Holiday blues: Navagio Beach is only accessible only by boat, but there are ‘awesome’ views from the clifftop above, Annabelle reveals

Simple pleasures are what this gloriously slow-paced part of Zakynthos is all about, a world away from the resorts that fringe the southern half of the island and give it something of a party reputation.

Zakynthos is the furthest south of the Ionian archipelago and shares the same soaring, mountainous landscapes and crystalline seas as Kefalonia and Corfu.

While cocktails and clubbing characterise places such as Laganas and Zakynthos Town, the north-east is flecked with seaside hamlets and unspoilt inland villages, disturbed only by occasional day-trip buses or quad-bike safaris that bring tourists from the south to discover a very different side of the island.

Until recently, this stretch of coast has been the almost exclusive preserve of those on sailing holidays, or wealthy Athenians who built villas up in the hills. 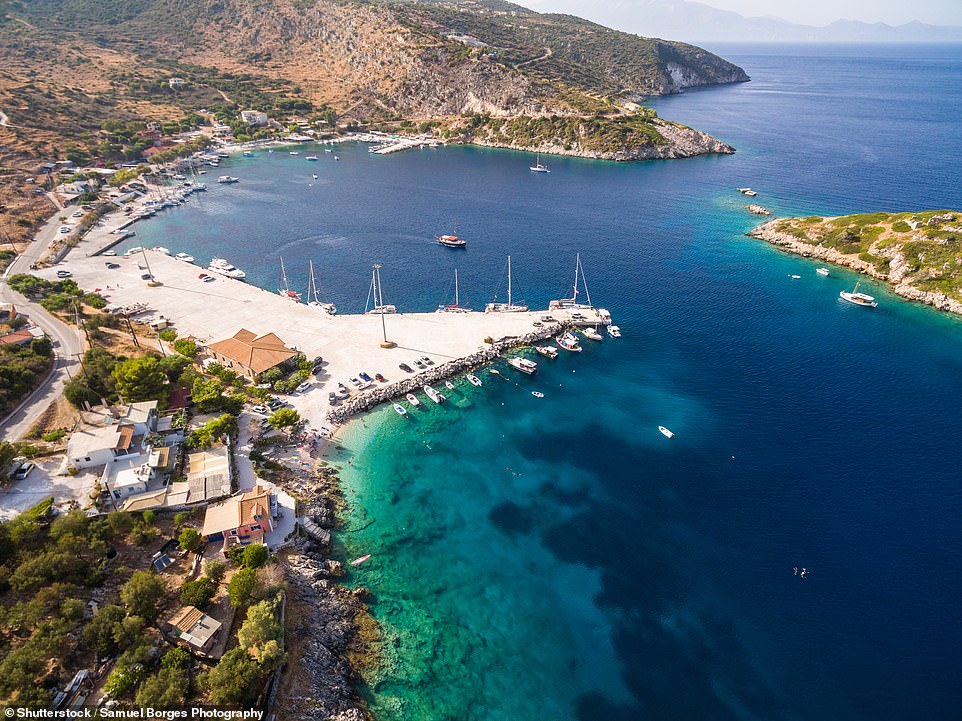 In the harbour of Agios Nikolaos, pictured, Annabelle watches as holidaymakers try to clamber into the inflatable tenders that will take them back to ‘gleaming boats that bob in the calm waters further out to sea’ 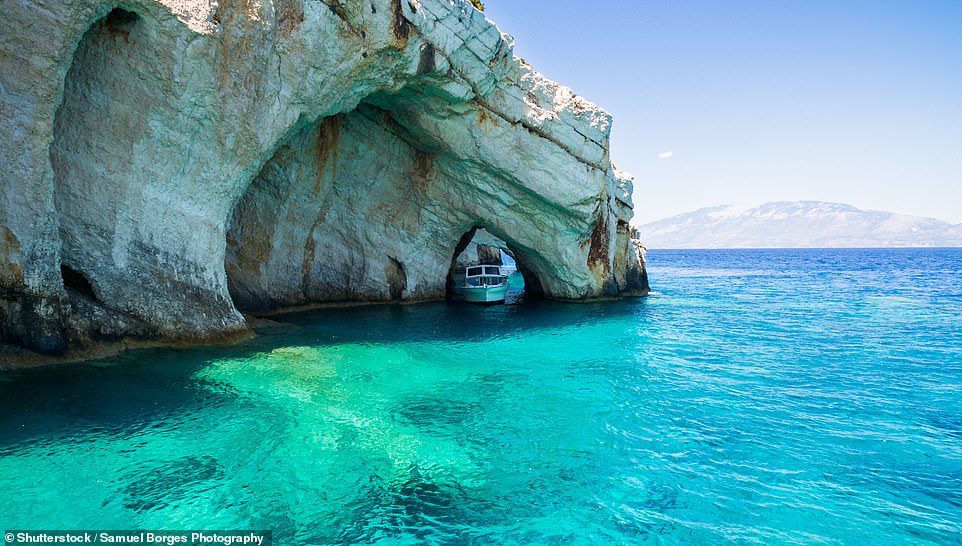 The hidden caves on the coast near Agios Nikolaos, an area that until recently had been the almost exclusive preserve of those on sailing holidays 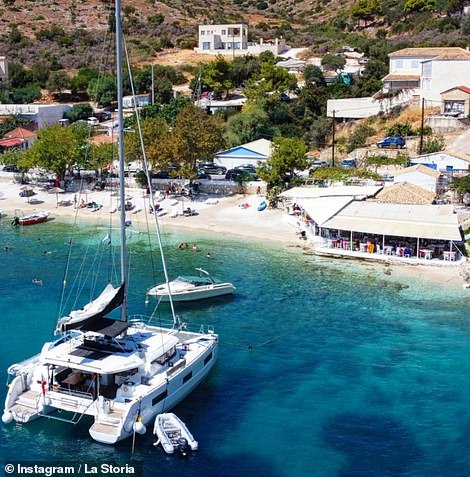 But slowly it’s opening up, with new places to stay popping up between the aquamarine bays, from boutique hotels to luxury villas.

Our base is an elegant, stone-built house, Villa Meli, set high above the coastline.

It is delightful, with glorious sea views from the private pool, a canopied outside dining area and chic interiors that are sumptuously comfortable without feeling at odds with the natural beauty of our surroundings.

From the moment we arrive, it’s clear the only problem is going to be persuading ourselves to leave.

It would be quite possible to spend our week here doing nothing more than snoozing in the hammock beneath the olive tree and taking in the sea views.

But there is much to explore, so, after giving ourselves a day to relax, we set off to see the northern half of the island, following the narrow – mercifully quiet – roads that wind between the lush fields and forested slopes rising up from the coast.

Annabelle says that while cocktails and clubbing characterise places such as Zakynthos Town (above), the north-east is flecked with seaside hamlets and unspoilt inland villages 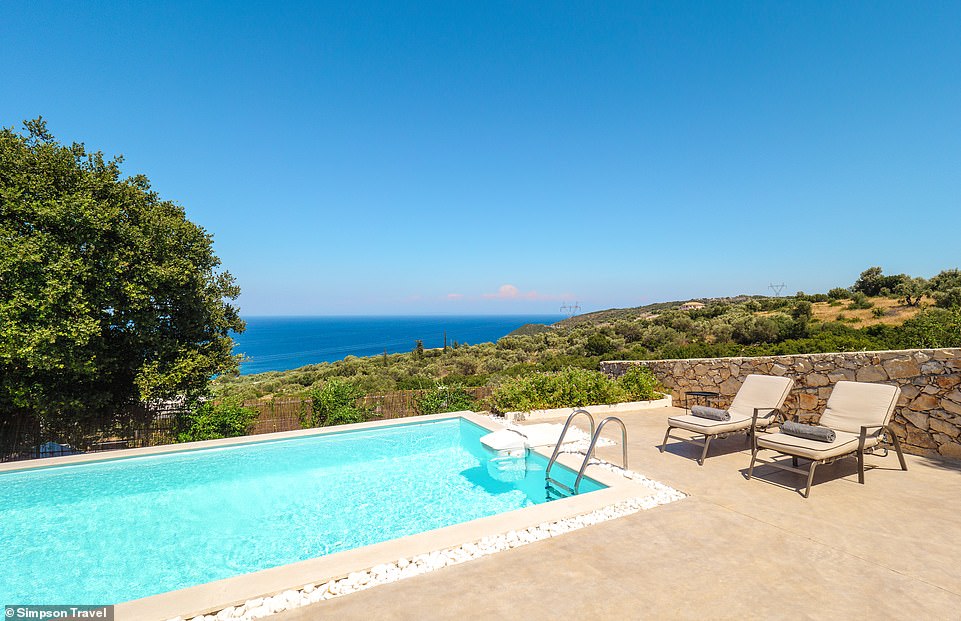 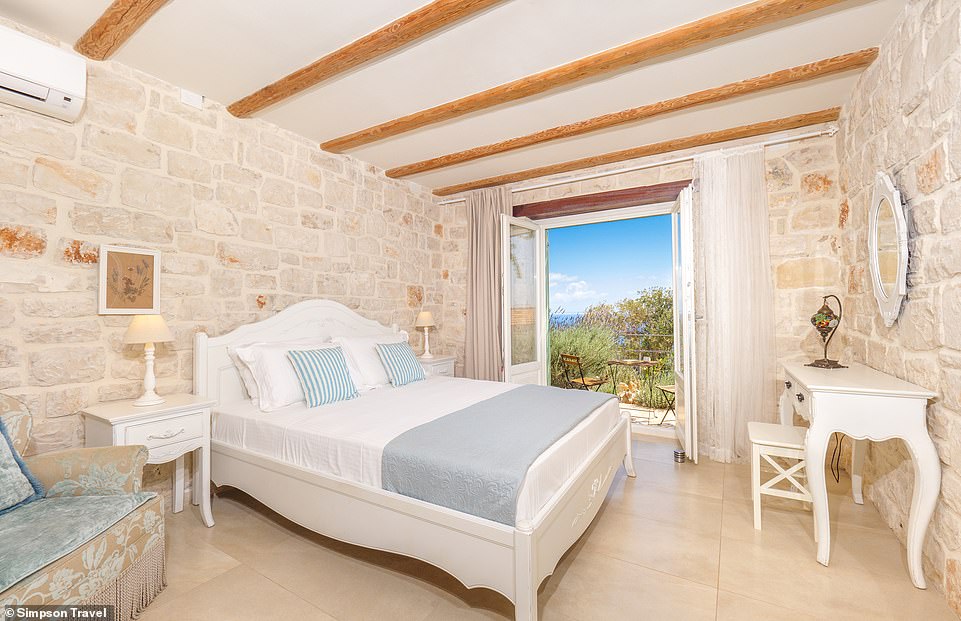 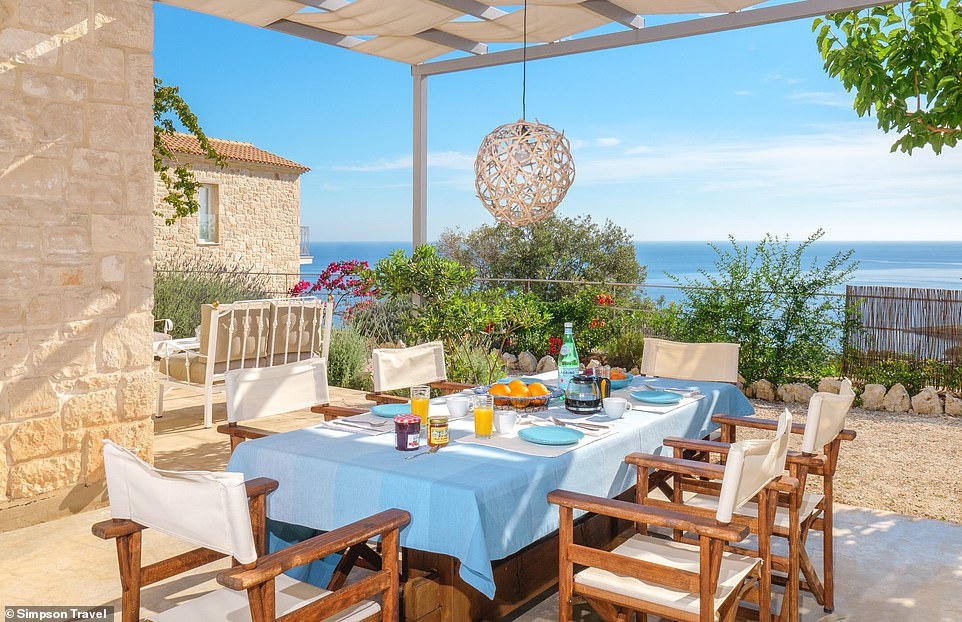 The canopied outside dining area at Villa Meli. During her stay, Annabelle enjoys snoozing in the hammock and taking in the sea views 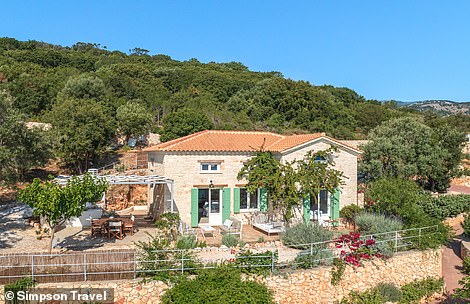 ‘From the moment we arrive, it’s clear the only problem is going to be persuading ourselves to leave,’ Annabelle says of Villa Meli

Our first stop is Volimes, the most important town in the region. Unlike much of Zakynthos, the place is still dotted with traditional stone-built houses that pre-date the earthquake of 1953 which flattened so many buildings on the island. It’s a popular stop on the day-trip trail, with shops selling locally produced lace, bottles of olive oil and jars of honey, but there are plenty of quieter streets with great bursts of deep-pink bougainvillea and clusters of scarlet geraniums tumbling over whitewashed walls.

From Volimes, it’s just a short drive to see the island’s most famous landmark – Navagio Beach.

Also known as Shipwreck Beach, due to the rusting skeleton of the coaster Panagiotis that lies across the swathe of white pebbles, it’s accessible only by boat, but there are awesome views from the clifftop above. Fortunately our visit doesn’t coincide with any coach trips, as the viewing platform is big enough for only two or three people. 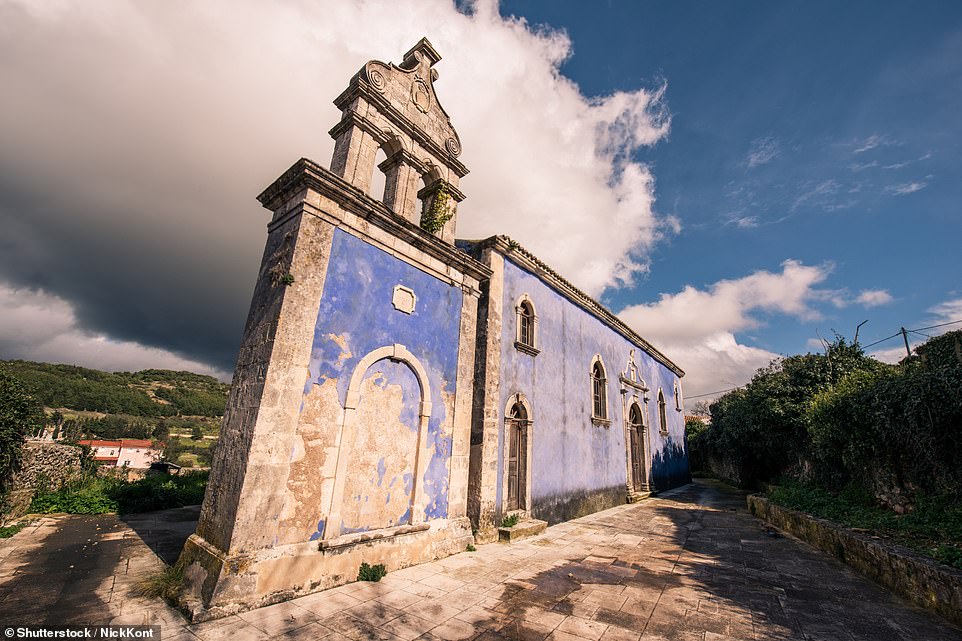 Above is the Temple of Saint Spyridon in Volimes, the most important town in the northern half of the island. ‘It’s a popular stop on the day-trip trail,’ Annabelle says of the town

A few hardy (or mad) souls are walking out along the clifftop to take pictures, but the 650ft drop keeps me safely behind the barrier on the platform.

The view itself is familiar – anyone who has ever read anything about Greece will have seen a picture of Navagio Beach – but nothing quite prepares you for the depth of the colours; deep cerulean, vivid teal, a sparkling electric blue that warms to aquamarine as the baby waves break over the crisp, off-white of the bay.

A handful of boats bob in the water while the beach itself is freckled with figures taking selfies and soaking up the sun. 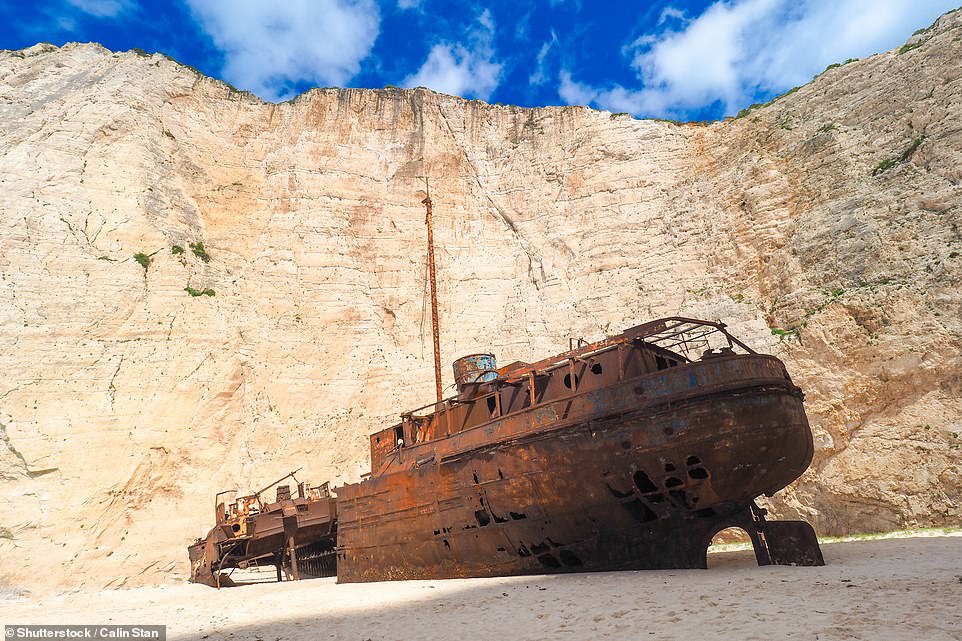 Navagio Beach is also known as Shipwreck Beach, due to the rusting skeleton of the coaster Panagiotis (above) that lies across the swathe of white pebbles 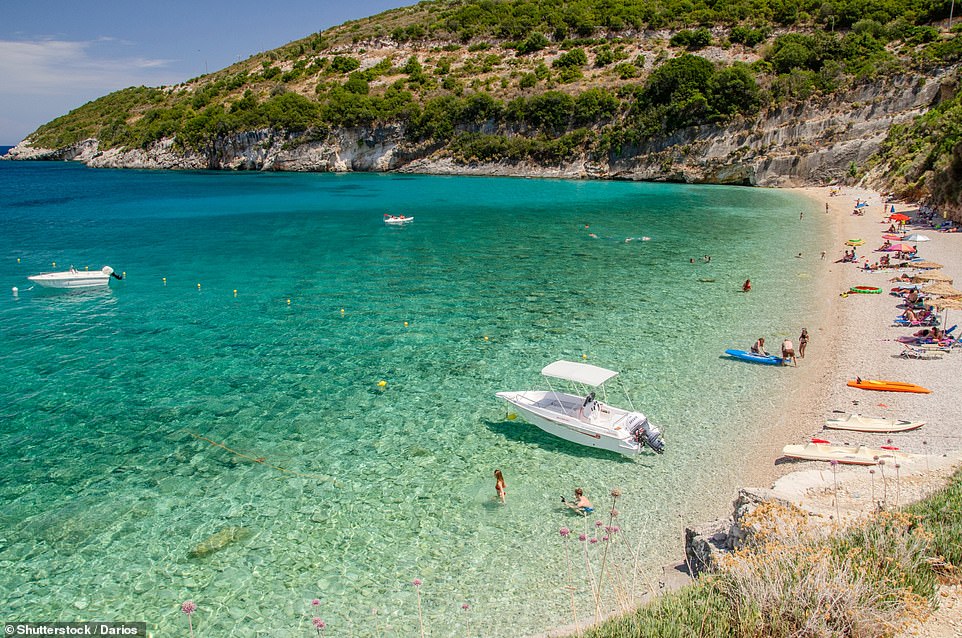 Annabelle spends a few days discovering the small beaches that fringe the coast below her villa, including the beach of Makris Gialos (above) 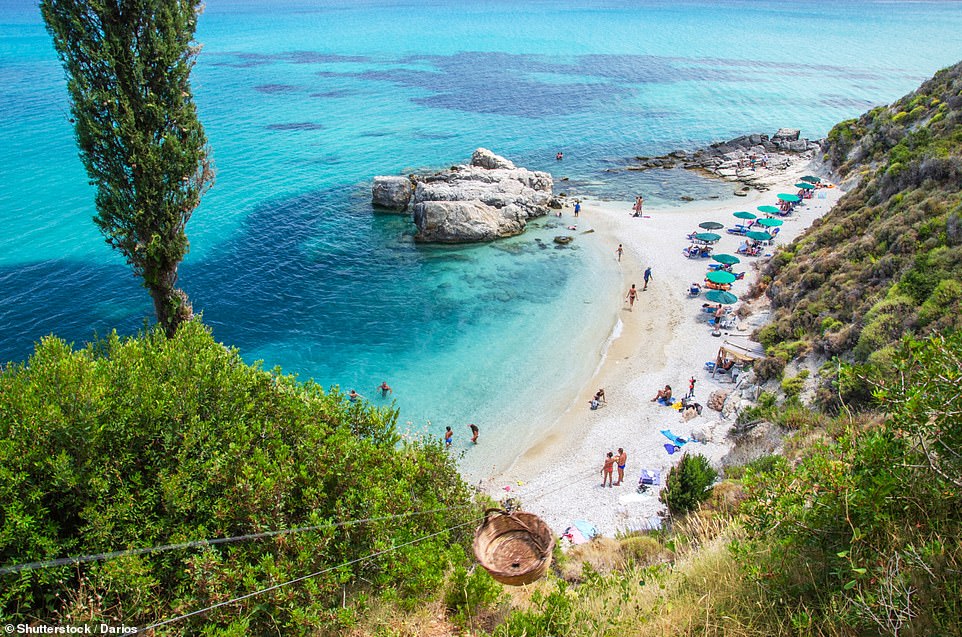 Annabelle describes Xigia beach (above) as ‘pebbly and relatively small’, but with waters that are an ‘extraordinary shade of blue’

There’s something wonderful about seeing a beach so beautiful, entirely devoid of sunloungers and parasols, although in high season the number of tourist boats that moor up here can detract from the natural spectacle.

We spend the next few days discovering the small beaches that fringe the coast below our villa. This isn’t the place to come for an afternoon building sandcastles – both Makris Gialos and Xigia are pebbly and relatively small – but the waters are the same extraordinary shade of blue as Navagio, caused by the sulphur deposits that seep out of the caves tucked into the walls of the cliffs.

In spite of how enticing it looks, the waters prove a little too chilly for a dip, so instead we settle for paddling and a lazy lunch right by the water at Mikro Nisi, where the Mythos beer is super-cold and the crab linguine to die for.

But it’s the evenings when the magic really happens. The sun slowly sinks behind the mountains and the sky melts into a blurred strata of sunset colours – lavender and apricot and pale silver-blue.

This is the Greece we’ve been dreaming of for the past two years. Lazy afternoons beneath azure skies, crystalline seas and simple dinners of zingy tzatziki, succulent grilled prawns and nutty baklava. It’s wonderful to be back.