Danes see potential in unlikely places. In Copenhagen, a city that cultivated a worldwide gastronomic movement from the ostensibly meager bounty of the Nordic landscape, the latest local hot spot is a decaying former shipyard.

Refshaleoen, in the city’s northeastern docklands, is a heavily industrial area that once housed one of Europe’s largest shipbuilding operations. When the shipyards closed decades ago, many of the hulking warehouses and factory buildings were left deserted.

“So many of my colleagues in the city, when I told them that we were going to open up out here, they said to me, ‘You’re crazy. It’s so far away, it’s so far away. No one’s going to go,’” said Matt Orlando, the former head chef at Noma who left to open his own outstanding restaurant, Amass, in Refshaleoen in 2013. (In 2018, Noma itself opened its much-anticipated new location minutes away.)

“Five years ago, it was a place where, at night, really weird things would go on,” Mr. Orlando recalled of the early days, when the restaurant’s large dining room windows offered guests views of both the adjacent garden and occasional illicit drug use.

“It was kind of this forgotten-about corner of Copenhagen,” he said. “This untapped, raw piece of Copenhagen that still exists in the central part of the city.”

“It’s dramatically different now. There’s so many people out here,” he continued, mentioning the artisanal bakery Lille, which opened last May, and La Banchina, a waterside cafe and restaurant with a private sauna and an idyllic pier where locals sip natural wine on sunny days. And in January, in a soaring industrial space near Amass, Mr. Orlando opened Broaden & Build, a craft brewery and casual restaurant with picnic tables, color-splashed walls and seasonal dishes.

“It’s still really raw and rough,” he said, comparing the area to Brooklyn’s Red Hook neighborhood, with its faded shipyard grandeur. “The way it’s changed mostly is that all of the buildings out here, all these warehouses and small little nooks and crannies are now occupied by people with businesses.”

One of the most ambitious new residents is Reffen, a roughly 50,000-square-foot, outdoor food market (formerly called Copenhagen Street Food) with more than 40 vendors that relocated to Refshaleoen last summer after a successful stint on Papiroen, an inner-city island now being redeveloped. The market will reopen for the season on March 29.

“It has without a doubt brought a whole new burst of energy to the island, and exposed what is out here to the general public,” Mr. Orlando said of Reffen, which was constructed from old shipping containers on a dusty harborside lot surrounded by dilapidated warehouses.

Another new tenant (and fellow Papiroen transplant) is Copenhagen Contemporary, an exciting art center that opened last June and exhibits the work of international contemporary artists, including Doug Aitken and the Danish trio Superflex.

“It’s 15 minutes on a bike from central Copenhagen,” said the director, Marie Nipper, who previously worked at the Tate Liverpool. “The distances in Copenhagen are so small, but in a Danish context it’s kind of far outside of the city because it hasn’t been part of that daily routine before.”

“The space that we’re in is the old welding hall where they used to weld some of the larger parts of the ship,” she said, noting that the monumental size of the building is ideal for large-scale installations, such as a collapsing forest by the Swiss artist Claudia Comte (through Sept. 1). “It was really the perfect location for us.” 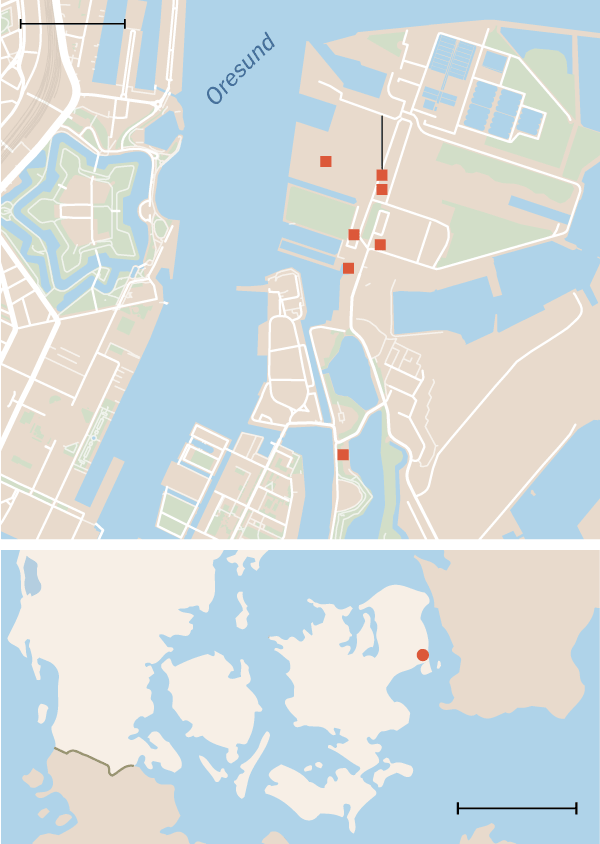 By The New York Times

Another major draw is Mikkeller Baghaven, a barrel-aging operation, beer garden and tasting room in a former workshop next to Reffen.

“Everything that we make here incorporates wild yeasts and bacteria that we’ve isolated from this area, Refshaleoen, or Denmark, in general,” Ehren Schmidt, the master blender and brewer, said. This means Baghaven uses, for example, strains from wild blackberries and apples off a nearby tree to produce its spontaneously fermented beers, saisons and wild ales, many in limited-edition batches, which are often available only on site.

“If you’re coming out here, you’re coming because you want a different experience,” he said. “It’s this kind of industrial, kind of post-apocalyptic vibe out here. Everything’s in containers, it’s kind of anything goes, so to speak.”

On his first visit to the waterside site two years ago, Mr. Schmidt said, “I remember at the time thinking, ‘Wow, it’s kind of like the wild West out here.’ It’s definitely evolved since then.”

“Now the island is a destination for Copenhageners as a cool place to hang out,” Mr. Orlando said, particularly as spring approaches and sun-starved Scandinavians eagerly venture outdoors again. “The more people out here, the better.”

52 PLACES AND MUCH, MUCH MORE Follow our 52 Places traveler, Sebastian Modak, on Instagram as he travels the world, and discover more Travel coverage by following us on Twitter and Facebook. And sign up for our Travel Dispatch newsletter: Each week you’ll receive tips on traveling smarter, stories on hot destinations and access to photos from all over the world.

Related posts:
02/12/2020 Travel Comments Off on Copenhagen’s Latest Draw? An Abandoned Shipyard
Recent Posts
We and our partners use cookies on this site to improve our service, perform analytics, personalize advertising, measure advertising performance, and remember website preferences.Ok