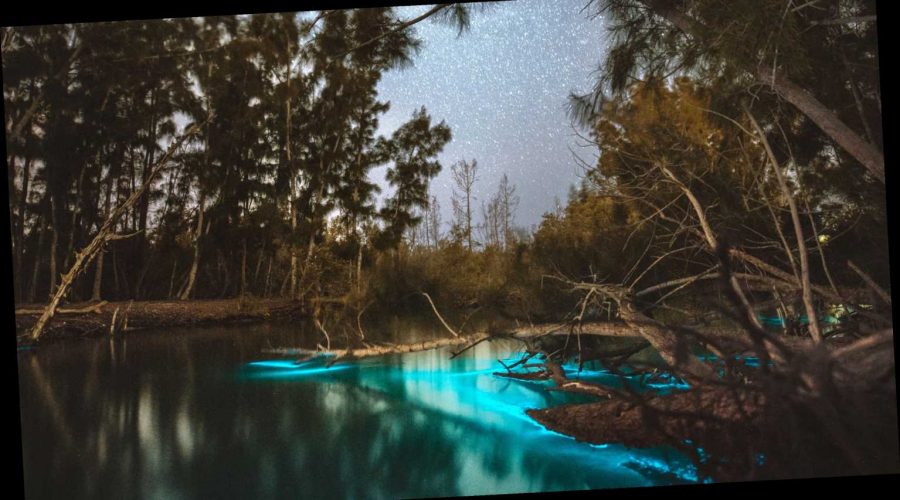 Picture this: It’s after dark and you’re kayaking through Florida’s Merritt Island National Wildlife Refuge, about an hour from Walt Disney World. The sky is so dark that the stars are in clear view. The only noise you hear is your paddle as it slices through the water. You’re already perfectly content.

Then, a pod of more than 20 dolphins shows up. That, in itself, is enough to get the endorphins going.

But, wait, it gets better.

When the dolphins exhale, the water spray expelled from their blowholes begins to glow. You are suddenly surrounded by sea sparkles in every direction. As dolphins dart beneath you and beside you they glow a lovely neon blue. Dip your hand in the water, and the brilliant blue shows up yet again.

It’s all thanks to a large concentration of single-celled bioluminescent organisms called dinoflagellates that bloom here from June to October each year. They light up like fireflies in the water, creating an unforgettable spectacle like something straight out of “Avatar.”

“The unique thing about where we paddle in the refuge is that it's in the middle of a 140,000 acre wildlife refuge with no light pollution,” Get Up and Go Kayaking founder Justin Buzzi says. “It's so dark that you can even see the Milky Way on clear nights.” (Photo: Tony Catalano/Get Up and Go Kayaking)

Just ask Justin Buzzi, the founder of Get up and Go Kayaking, an Orlando-based company that leads guests on this bucket-list adventure in see-through kayaks. He’s experienced the phenomenon for the past several years.

“The unique thing about where we paddle in the refuge is that it’s in the middle of a 140,000 acre wildlife refuge with no light pollution,” Buzzi says. “It’s so dark that you can even see the Milky Way on clear nights.”

It’s equal parts peaceful and thrilling. And don’t be surprised if a jumping mullet (also glowing bright blue) occasionally goes kerplunk into your kayak. Chances are, it will be a giggle fest as you attempt to help the fish get back into the water.

Why, you may be wondering, does the bioluminescence happen regularly here? Edith Widder, founder of the Ocean Research & Conservation Association, says the bloom is consistent because it happens in an estuary that tends to be protected and stable.

Lucky for us, that means it’s something to easily plan ahead for. Tours run from May to October, but Buzzi says the best nights for viewing the bioluminescence are the darkest nights. He recommends a night with 55% moon phase or less, with July and August being the peak season.

Not the Disney World type?  Clear kayak tours and otter-spotting in Florida offer an antidote to amusement parks

A Fliteboard, a battery-powered watercraft known as an e-foil, is battery-powered hydro craft that looks like a surfboard but maneuvers on water with the quickness of a jet ski. (Photo: Jennifer Stenglein for Fliteboard)

Think surfboard. Now add a long metal rod to that board that elevates it several feet above the water. Add a small motor, lithium battery and a remote control and voila, you’ve got a Fliteboard, a battery-powered watercraft looks like a surfboard but maneuvers on water with the quickness of a jet ski.

Make your way to Maui and rent a Fliteboard at E-Foil Hawaii. The family-owned business offers lessons and rentals. After a quick orientation, you hop on a board and propel yourself through Maui’s gorgeous waters where you might catch a glimpse of a turtle, manta ray or dolphin. And if you visit between mid-December and mid-May, it’s highly likely you’ll spot humpback whales.

Rent a vintage boat in Michigan

For something more tame, make a beeline for Retro Boat Rentals in Saugatuck, Michigan. Here you can rent a vintage boat to take in views of Kalamazoo Lake, a picturesque inland body of water that makes for the perfect backdrop. Choose from a whole fleet of old-school boats that have been retrofitted as electric. Because of their classic styles, these boats are often used for weddings, engagements and birthdays.

Jane, a 1958 Geneva is a popular pick. So is Ruby, a 1959 Bell Boy Banchee that seats four. Keep in mind, the boats only reach about 5 mph, so it’s more about the experience and less about speed.

For something more roomy, opt for a Donut Boat, which hold up to 10 people. The electric, easy-to-maneuver boats have a round table in the middle, so you can picnic the whole time. It’s also pet-friendly, so bringing your dog or adventurous cat along is absolutely OK. Pontoon boats and Duffy boats are also available. They are perfect for a sunny day since they have shaded areas. And on a cold day, clear panels can be added for extra warmth.

Wreck Alley, a popular series of shipwrecks off the coast of San Diego, attracts serious scuba divers from around the world. For a super adventurous day, book a dive with Waterhorse Charters to explore the shipwrecks a few miles offshore.

Crowd pleasers include the HMCS Yukon, a 366-foot-long Canadian destroyer escort, and the Ruby E, a 156-foot-long Coast Guard cutter. Due to the strong currents, chilly water temps and possible disorientation, only experienced open-water-certified divers are able to go on this trip.

03/29/2021 Travel Comments Off on Cool ways to get out on the water this spring: Bioluminescent kayak tours in Florida, fliteboarding in Hawaii
Recent Posts