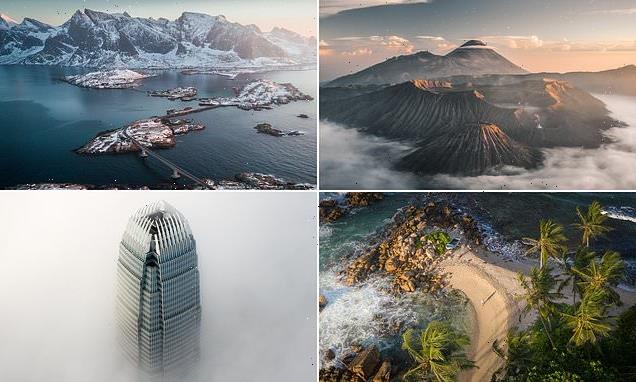 British airline pilot takes off on Instagram thanks to the incredible images he snaps on his travels around the world, from San Francisco to Sri Lanka via Dorset

An airline pilot for six years, Lee Mumford knows his way around the controls of a plane.

And these pictures show that he’s got to grips with cameras, too.

They have all been posted to Instagram and resulted in the Briton’s following taking off alongside his career. He now has over 16,000 followers thanks to incredible images taken on his global travels.

His snaps include a breathtaking shot of Norway’s Lofoten Islands, an amazing photo of Utah’s Canyonlands National Park, a spellbinding aerial image of Old Harry Rocks in Dorset and a jaw-dropping picture of a train on the famous Nine Arches Bridge in Sri Lanka.

Lee, 33, who is based in Hong Kong and has visited over 40 countries, tells MailOnline Travel: ‘I’ve always had a love for travel and once I fulfilled my dream of becoming an airline pilot, this gave me numerous opportunities to see some of the most incredible sights this planet has to offer.

‘I’ve definitely seen a lot more traffic come to my page over the past year as people spend more time at home due to lockdown. The top-down images especially fascinate viewers as they offer an angle not normally seen by the majority.’ Scroll down and let Lee fly you to some of the world’s most beautiful spots… 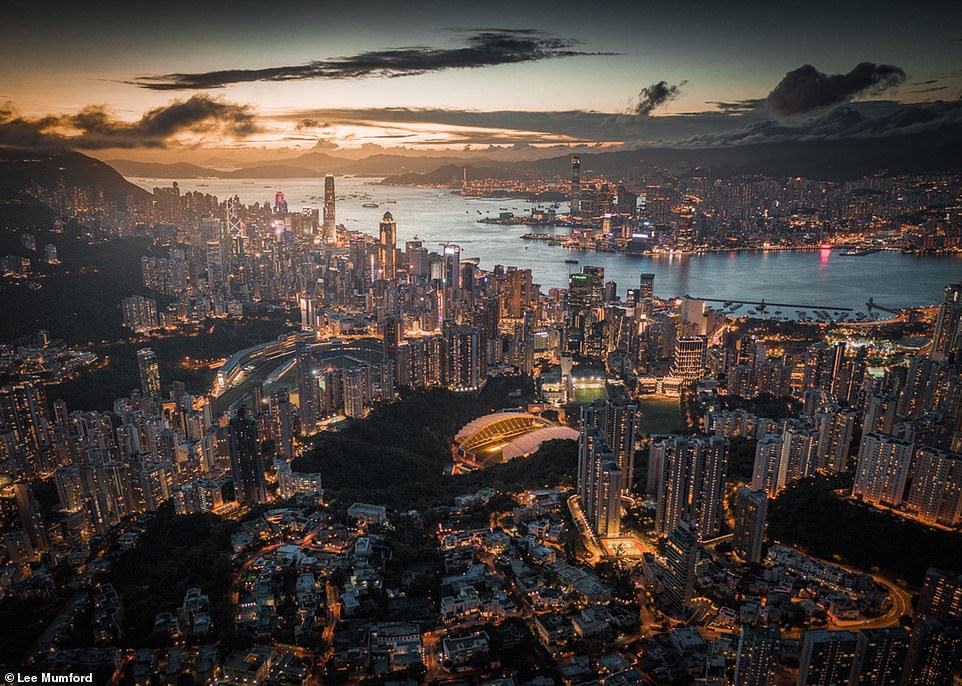 A spectacular drone shot of Hong Kong snapped from Jardine’s Lookout – a hill in the city that stands at 1,420ft (433m) high. Pilot Lee is based here and works for one of Asia’s leading airlines 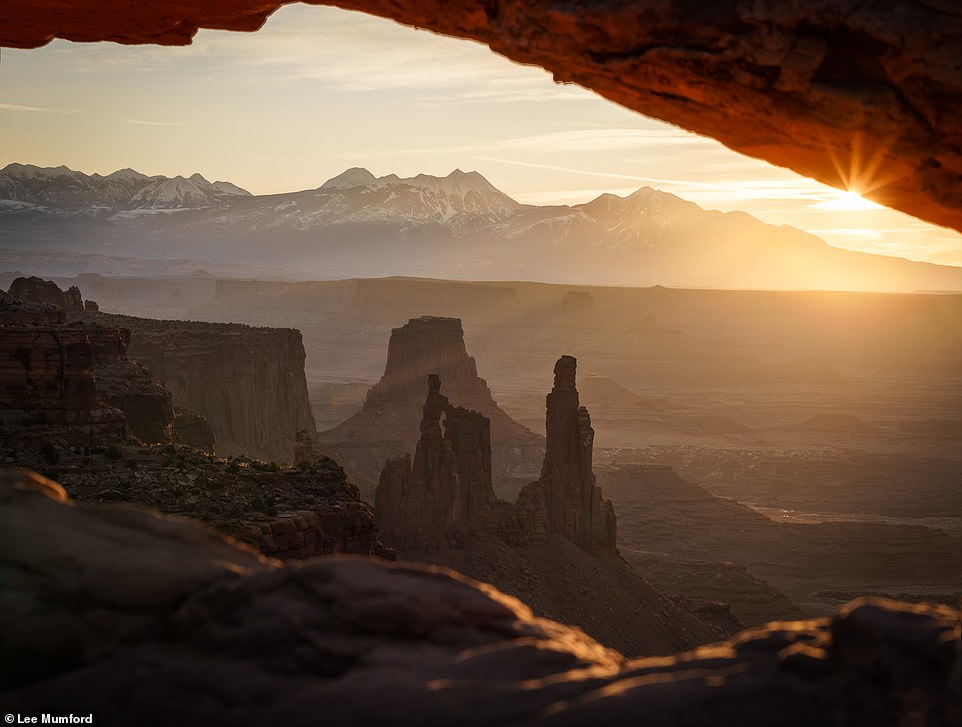 Lee has been lucky enough to visit over 40 countries and says he tries to maximise his time at each location so he can ‘really get a good understanding of the culture’. This stunning image was taken from the Mesa Arch in the jaw-dropping Canyonlands National Park in Utah 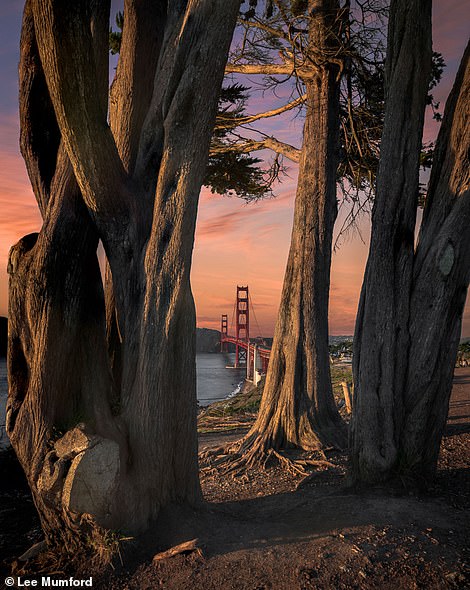 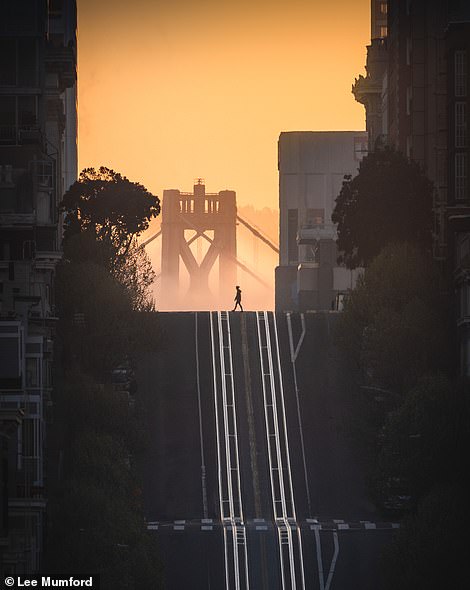 LEFT: An amazing shot of San Francisco’s Golden Gate Bridge. Lee says this image captures ‘the interaction between nature and human’. RIGHT: A mesmerising image of one of San Francisco’s famously steep streets, with a lone walker captured in silhouette at the summit 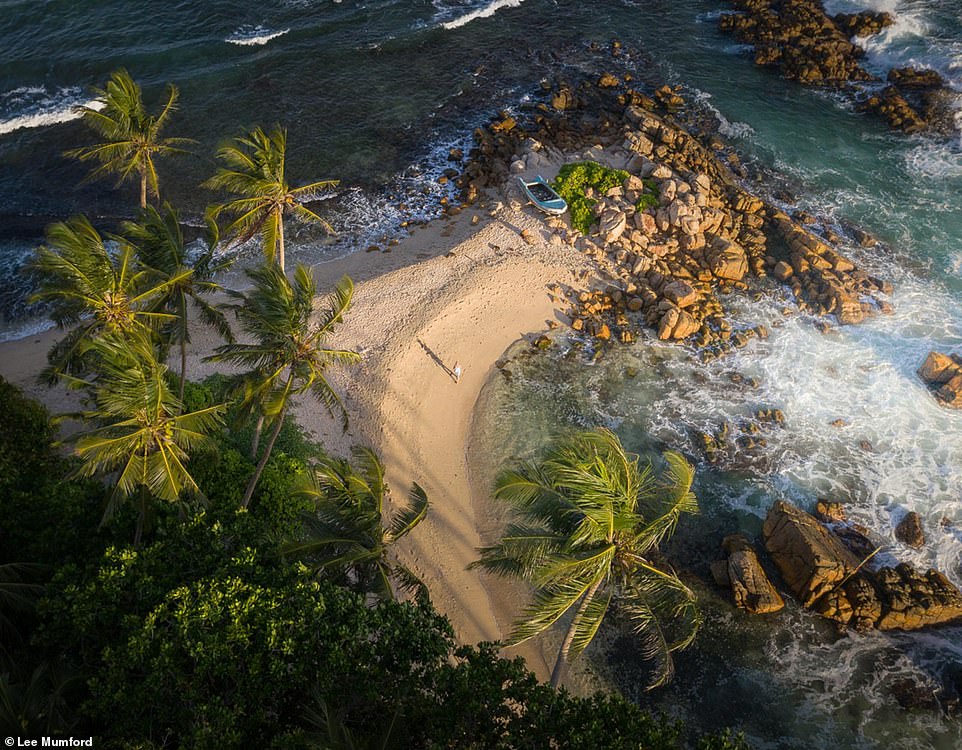 This incredible photo shows the stunning shoreline in Mirissa – a town on the south coast of Sri Lanka. Lee says: ‘I love the diverse landscape of Sri Lanka. You can be in the hustle and bustle of the city of Colombo, tea plantations in Ella or catching some waves while swimming with turtles on the south coast. This place is amazing, not to mention the incredible food and super friendly locals’ 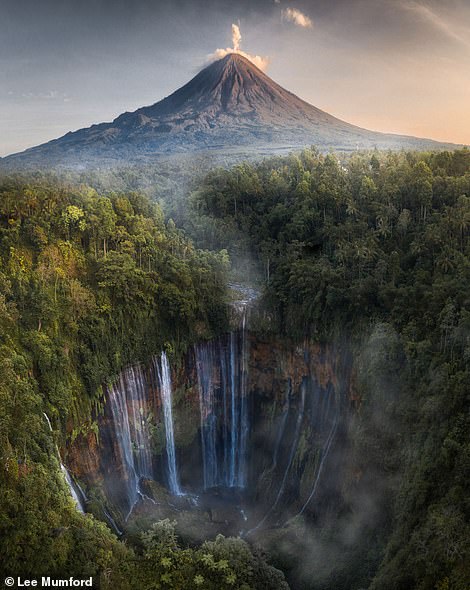 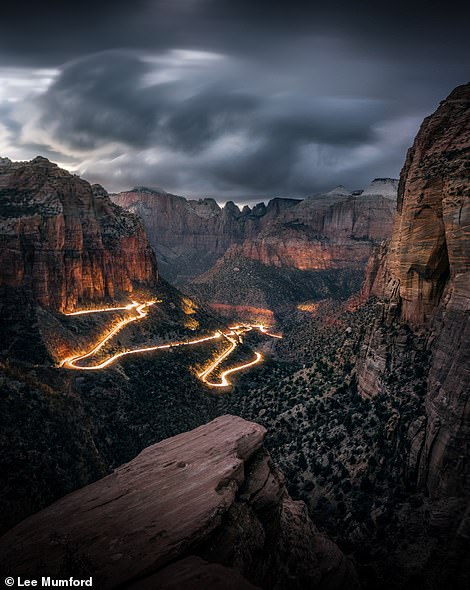 LEFT: A beautiful shot of the Tumpak Sewu Waterfall in East Java, Indonesia. Lee says: ‘This place is straight from the movies. The topography is like nothing I’ve ever seen before. Huge waterfalls and giant volcanoes will help take your landscape photography to a different level.’ RIGHT: One of the dramatic canyons in Utah’s Zion National Park. Lee wrote on Instagram: ‘Utah has such an incredible range of different landscapes and your trip wouldn’t be complete without a stop at Zion’ 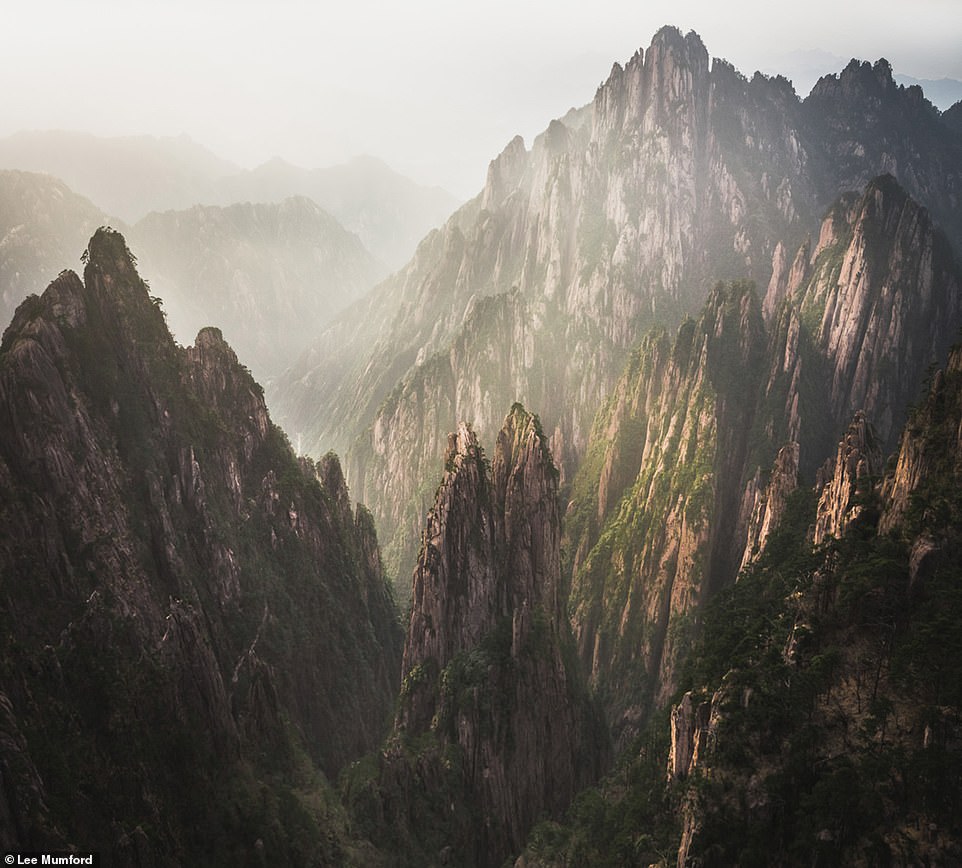 An incredible shot of Huangshan Mountain in Anhui province, China. Lonely Planet says: ‘When its granite peaks and twisted pines are wreathed in spectral folds of mist the idyllic views of Huangshan easily nudge it into the select company of China’s top 10, nay, top five, sights’ 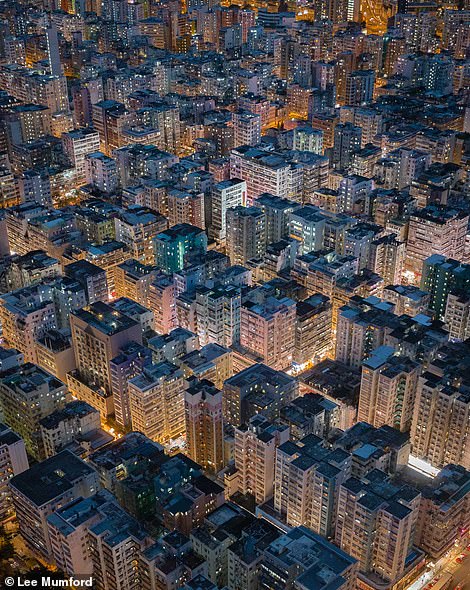 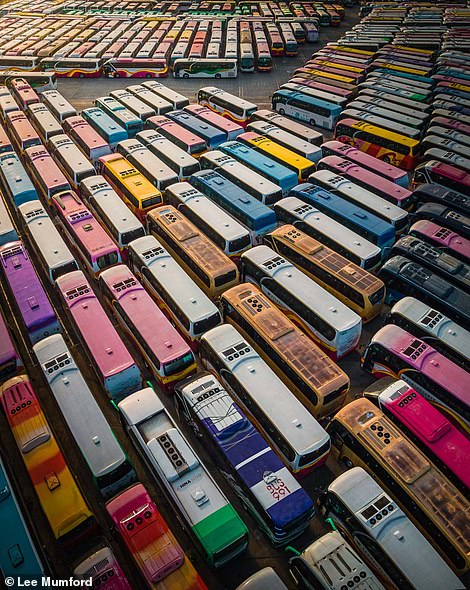 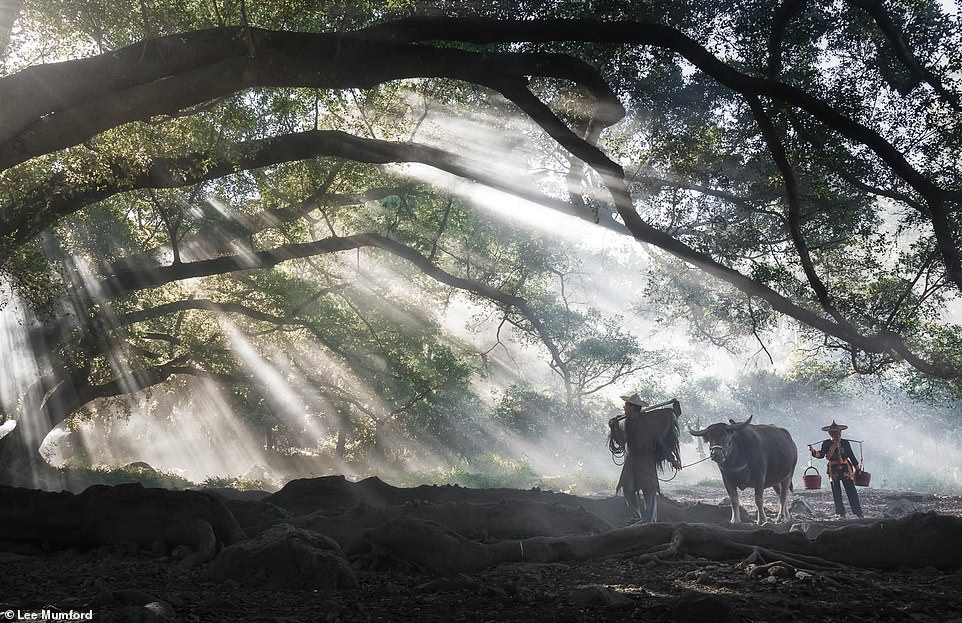 Lee captured this beautiful scene in rural Xiapu in eastern China. He explains: ‘We were blessed with a morning filled with incredible light as it pierced through these huge overhanging trees’ 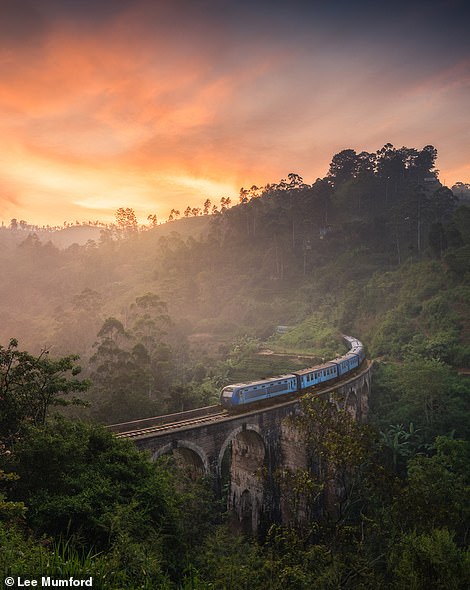 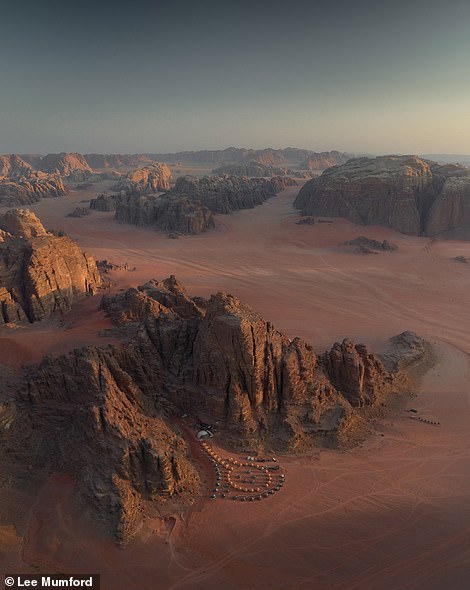 LEFT: A stunning shot of a train crossing Sri Lanka’s famous Nine Arch Bridge in Demodara. This is Lee’s favourite image. He explains: ‘This was my third sunrise in a row to capture something unique at the iconic Nine Arch Bridge. Eventually, on the third day, everything came together. A combination of the perfect light, a tad of mist and the train passing by… oh and a couple of friendly local dogs joined us for the occasion.’ RIGHT: A spellbinding drone shot of the Memories Aicha Luxury Camp that is nestled in the Wadi Rum desert in Jordan 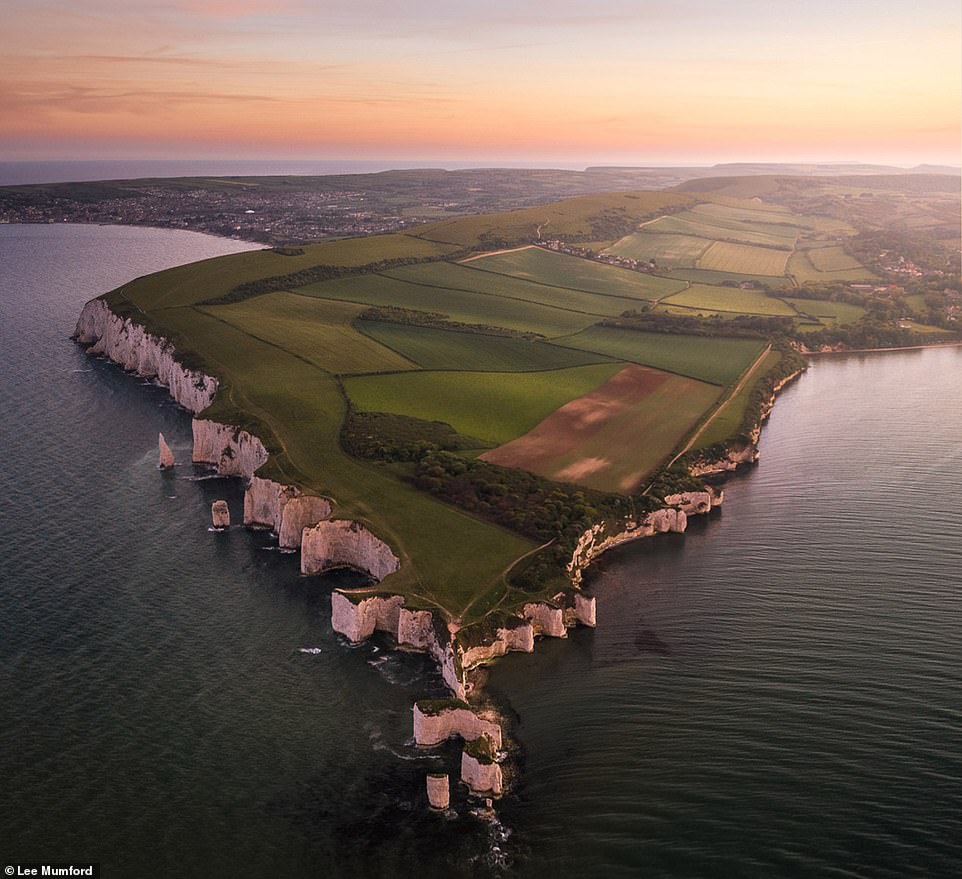 A bewitching aerial shot of the Old Harry Rocks chalk formations off the coast of Dorset. Lee says: ‘The top-down images especially fascinate viewers as they offer an angle not normally seen by the majority. Most people struggle to guess which country the images have been taken in due to the abstract feel they portray’ 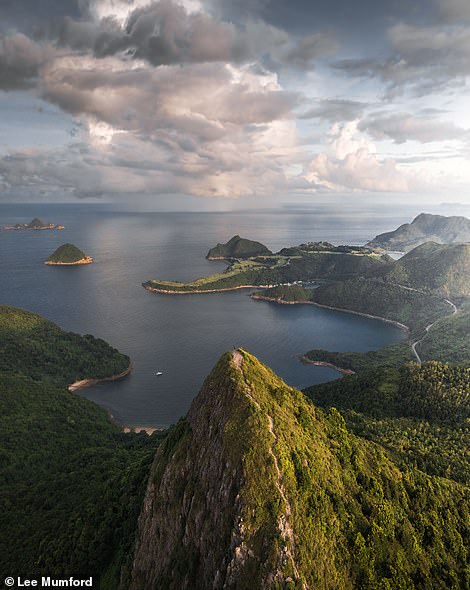 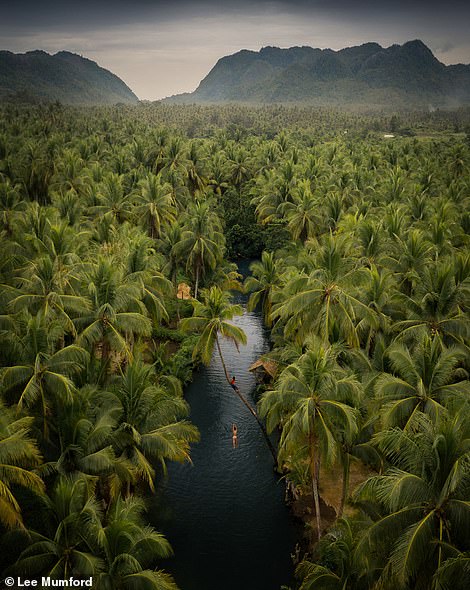 LEFT: A beautiful photo of Clear Water Bay on the eastern coast of the Hong Kong peninsula. Lee says: ‘The interaction between rich and poor, modern and historic, and from bustling streets to flourishing nature, Hong Kong offers so many angles for photography.’ RIGHT: In this amazing image of the Maasin River on the island of Siargao in the Philippines, two people can (just about) be made out playing on an overhanging coconut tree 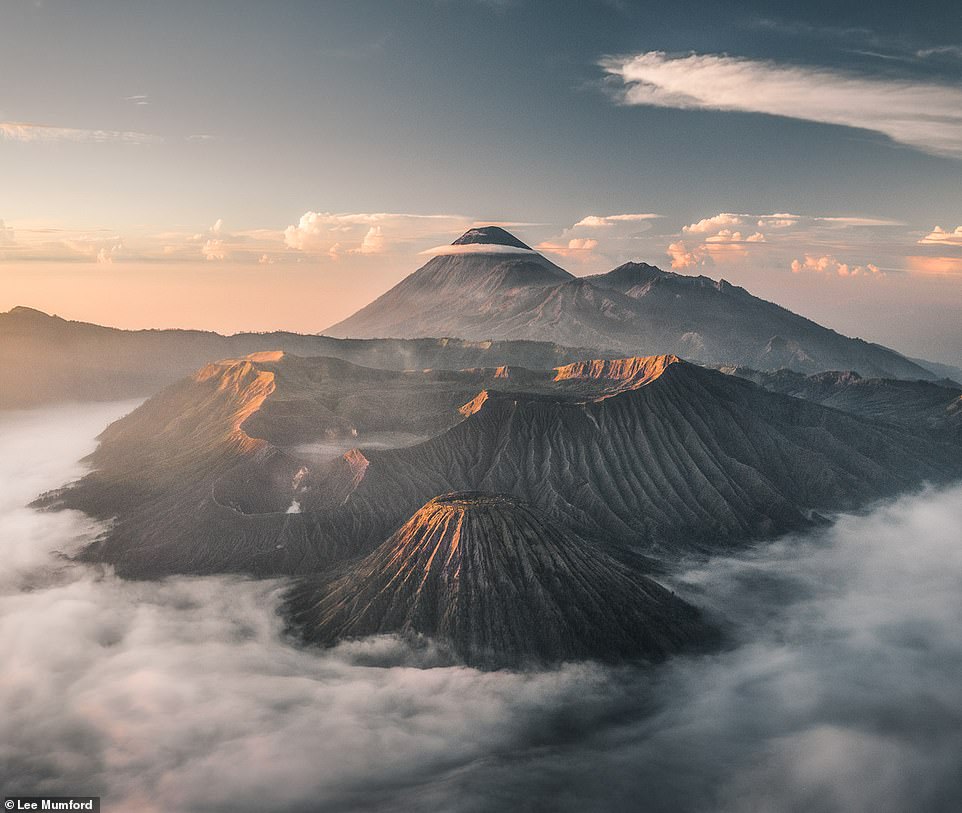 This mind-blowing shot shows Mount Bromo in East Java, Indonesia, surrounded by a sea of clouds. It is an active volcano that last erupted in 2016. It stands at 7,641ft (2,329m) tall 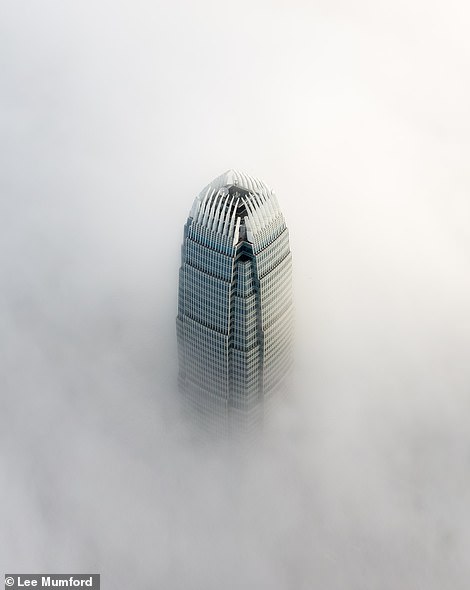 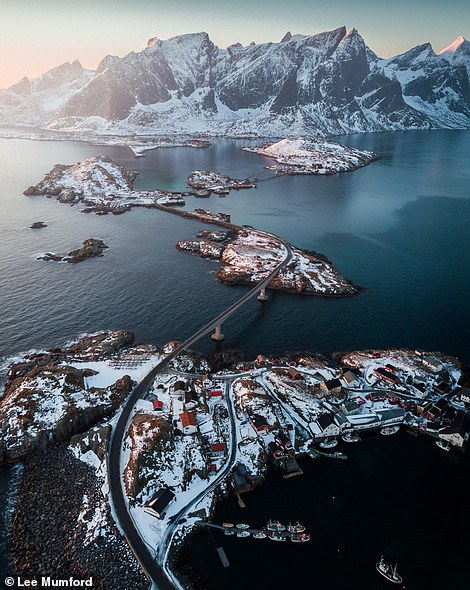 LEFT: A sea of clouds surrounds Hong Kong’s ICC skyscraper, which is the tallest building in the city. It is 1,588ft (484m) tall and houses office space, an observatory and The Ritz-Carlton Hong Kong hotel. RIGHT: A stunning shot taken by Lee in Norway’s Lofoten Islands. He explains: ‘From 24 hours of sunlight to 24 hours of darkness, this place offers something for everyone if you pick the right time. I went during winter in order to capture the stunning Northern Lights, which should be on everyone’s bucket list’ 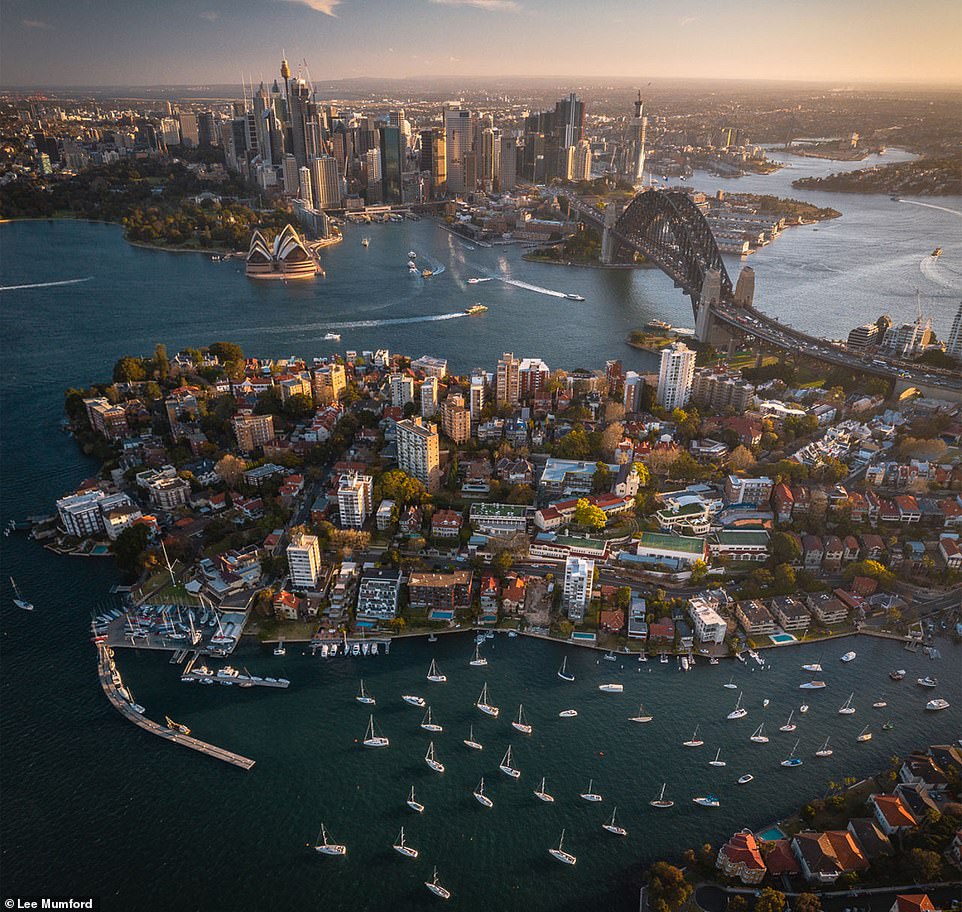 Lee’s Instagram caption for this stunning aerial shot of Australia’s most famous city reads: ‘Sydney is such a photogenic city and definitely one of my top five’