‘Not even a pandemic could force it to clean its act up’: Britannia is named worst hotel chain for EIGHTH year running by Which? with its properties described as ‘filthy’ – and Sofitel is No1

Britannia has been ranked the UK’s worst large hotel chain for the eighth consecutive year by Which?, with guests left shocked by the lack of hygiene at its properties and the travel editor of the group bewildered that not even the coronavirus crisis has seemingly had any impact on its cleanliness.

It was the only firm to receive just one star out of five for cleanliness, with the consumer champion saying one guest described their room at a Britannia property as ‘by far the dirtiest hotel room I have ever stayed in’ and another said theirs was a ‘filthy hovel’.

Coming top of the list was luxury chain Sofitel, which has three London properties at Heathrow, Gatwick and St James. It received a customer satisfaction score of 86 per cent. 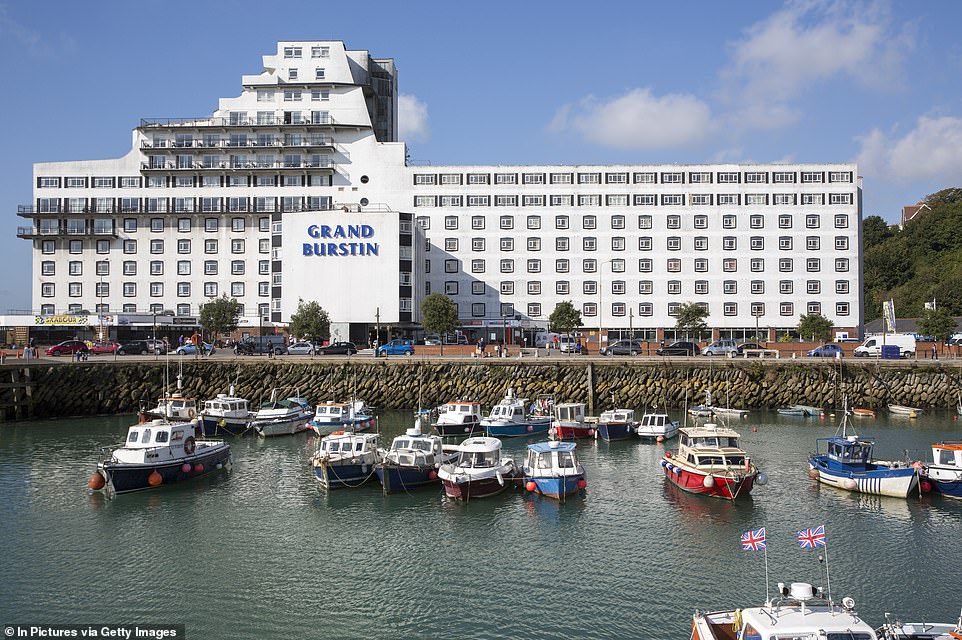 Britannia has been ranked the UK’s worst hotel chain for the eighth consecutive year by Which? Pictured is its Grand Burstin Hotel in Folkestone 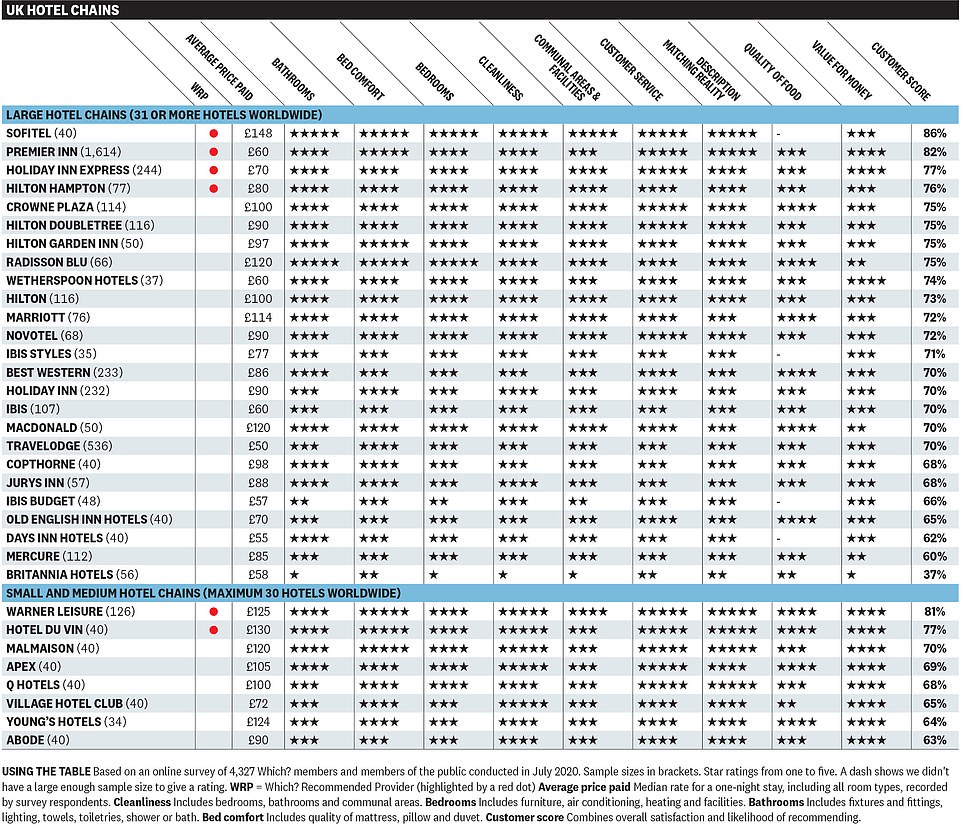 A table, courtesy of Which?, that shows the ranking – which has been broken down into large chains and small and medium-sized chains

Which? asked more than 4,000 people to rate their experiences at UK hotels, broken down into large chains and small and medium-sized chains.

Guests were asked to assess the hotels on a range of criteria, including bedrooms, bathrooms, cleanliness, customer service and value for money.

Britannia received an overall customer score of 37 per cent and failed to score more than two stars in any of the criteria, with one-star ratings for its bedrooms, bathrooms, and communal areas and facilities.

Despite being one of the cheapest hotel chains in the survey at an average of £58 per night, Which? says guests still only gave Britannia one star for value for money.

One of the most scathing reviews submitted to Which? by a Britannia guest was unprintable, says the consumer group.

When Which? visited the Folkestone Britannia, also known as the Grand Burstin, as part of a separate investigation into hotel hygiene, researchers say they found stray hairs and stained towels upon an initial inspection.

Following further tests using UV fluid and germ powder, researchers also explained they found surfaces that had not been thoroughly cleaned between stays. 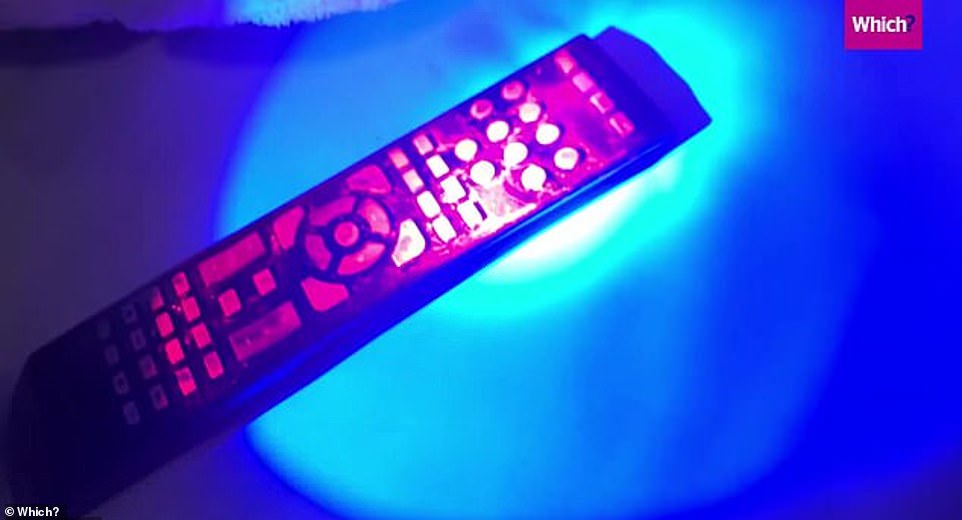 As part of a separate investigation, Which? researchers looked at hotel hygiene at Britannia’s Grand Burstin hotel 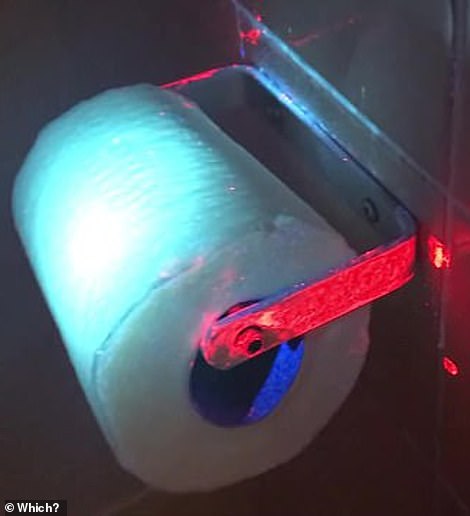 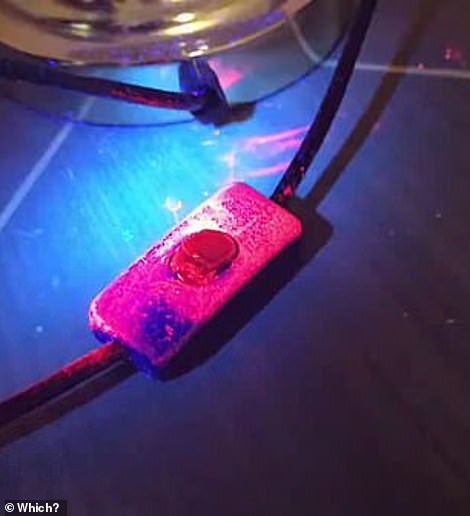 Following further tests using UV fluid and germ powder, researchers say they found surfaces that had not been thoroughly cleaned between stays at the Grand Burstin hotel 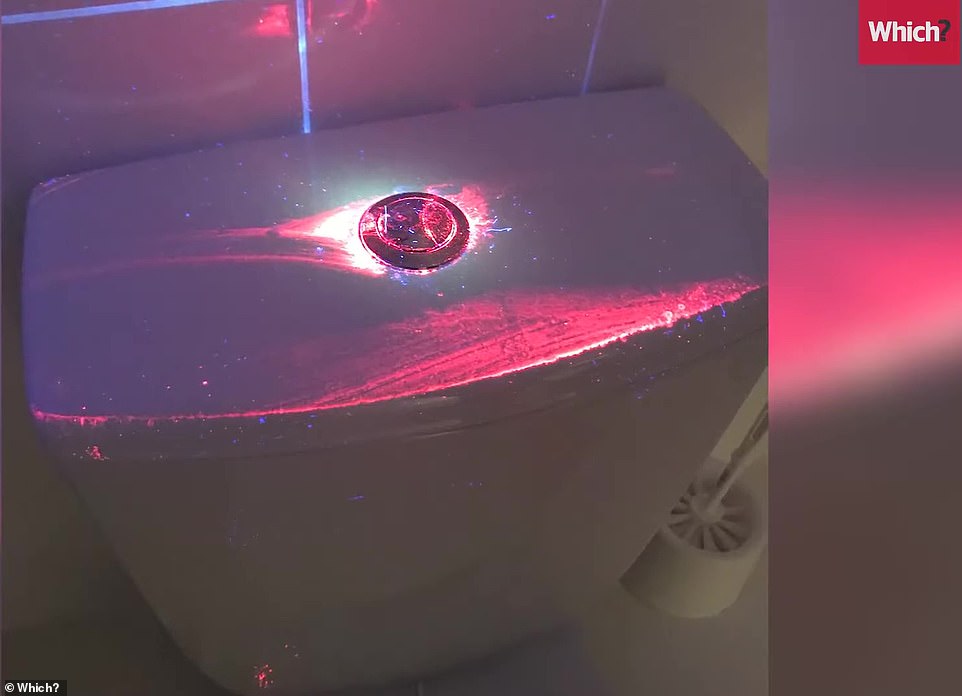 Washable substances are invisible to the naked eye, but glow red under an ultraviolet light. This image is from the investigation at the Grand Burstin hotel

At the chain’s Brighton hotel, the Royal Albion, Which? conducted swab tests that it says ‘revealed traces of enterococci bacteria on the toilet seat and bathroom door handle’.

When presented with Which?’s findings, Britannia said: ‘We are totally committed to providing a safe environment for visitors. We have so far spent around £2million on Covid-19 precautions, but we accept there is more to do.’

Cleanliness aside, the chain still managed to disappoint, says Which?

In a standard room in the basement of the Folkestone Britannia that the consumer watchdog checked into, it says there was ‘graffiti carved into the ageing wardrobe, pillows flimsier than bookmarks, and broken glass on the carpet at breakfast’.

Also near the bottom of the table, but scoring significantly higher than Britannia, were Mercure (60 per cent) and Days Inn Hotels (62 per cent). 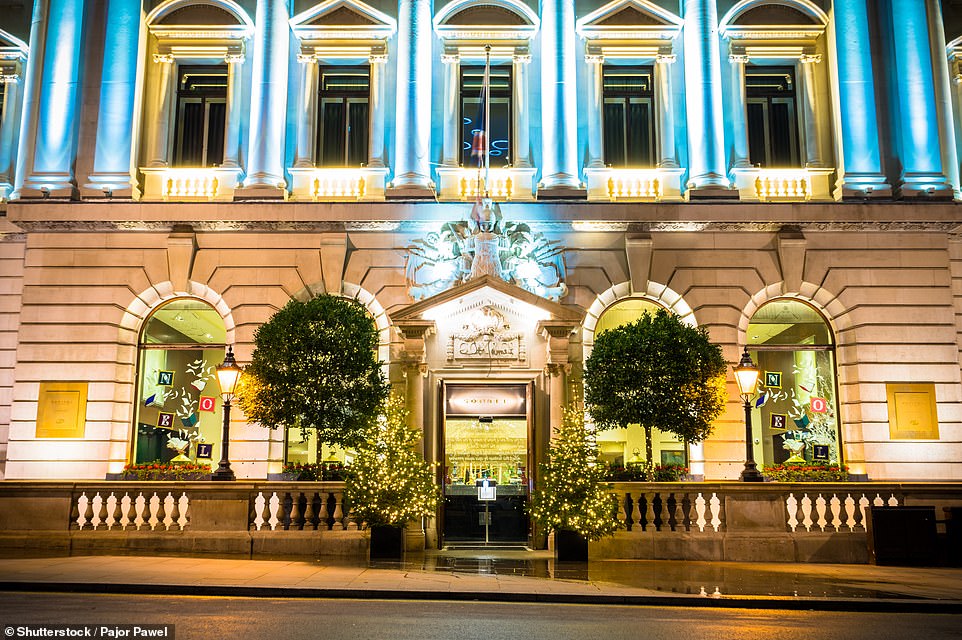 Coming top of the Which? ranking was luxury chain Sofitel, which received a customer satisfaction score of 86 per cent. Pictured is the Sofitel London St James

Both managed to muster three stars across most criteria, and when tested for cleanliness, Which?’s swabs came back without any cause for concern.

Sofitel, at the other end of the table, charges £148 a night on average, but guests told the watchdog it was worth it, commending its ‘outstanding service’ and ‘impeccable cleanliness’.

One guest told the consumer champion their Sofitel room was ‘probably the best hotel room I have ever occupied’.

However, when Which? visited the Sofitel St James to conduct swab tests as part of its hotel hygiene investigation, it says its researchers found ‘low levels of faecal enterococci on the toilet seat of the room it was checked into’.

Sofitel said it believed this to be an isolated issue, but conducted a ‘thorough review of its cleaning protocols’ in response to Which?’s findings.

With the exception of value for money, where it scored three stars, Sofitel scored five stars in every category. 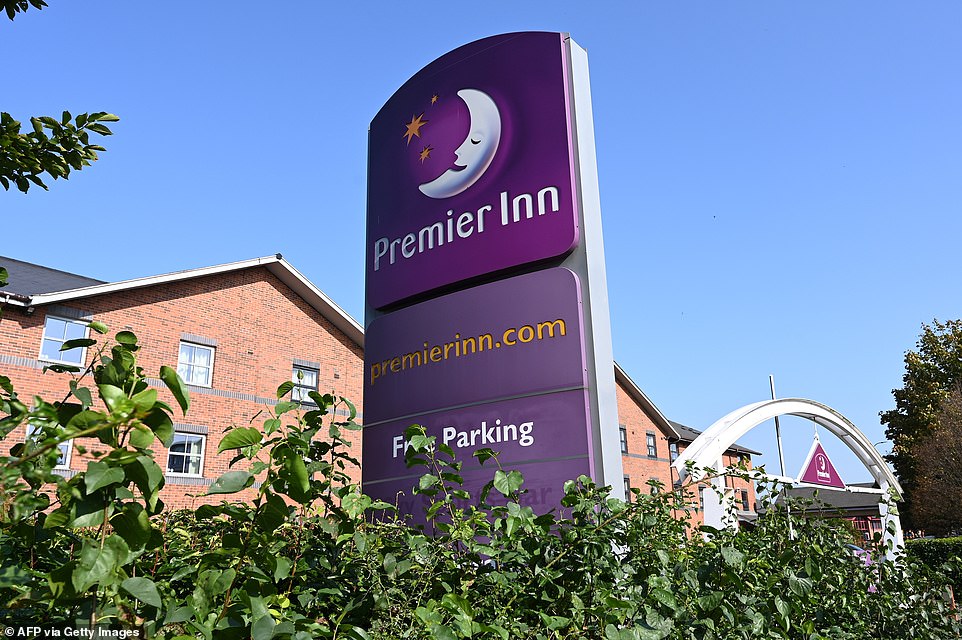 Premier Inn, which has occupied the top spot in the ranking for the past five years, came second with a customer score of 82 per cent

It was also the first chain to have knocked Premier Inn off the top spot in five years, with Which? suggesting that guests were ‘happier to throw a bit of money at their hotel stays this year, given the surge in popularity of UK holidays following the pandemic’.

Premier Inn came in just below Sofitel with a score of 82 per cent and was praised for its reliable quality at a reasonable price.

Guests frequently described the rooms as clean and comfortable, with countless respondents telling Which?, ‘you know what you’re getting [with Premier Inn]’.

Both Sofitel and Premier Inn were named Which? Recommended Providers, along with Holiday Inn Express (third, 77 per cent) and Hilton Hampton (fourth, 76 per cent), on account of their high scores and their approach to refunding customers over the pandemic.

When Which? asked people to rate their experiences at small and medium-sized hotel chains, it was Warner Leisure (81 per cent) and Hotel Du Vin (77 per cent) that came out on top, with both also being named Which? Recommended Providers. 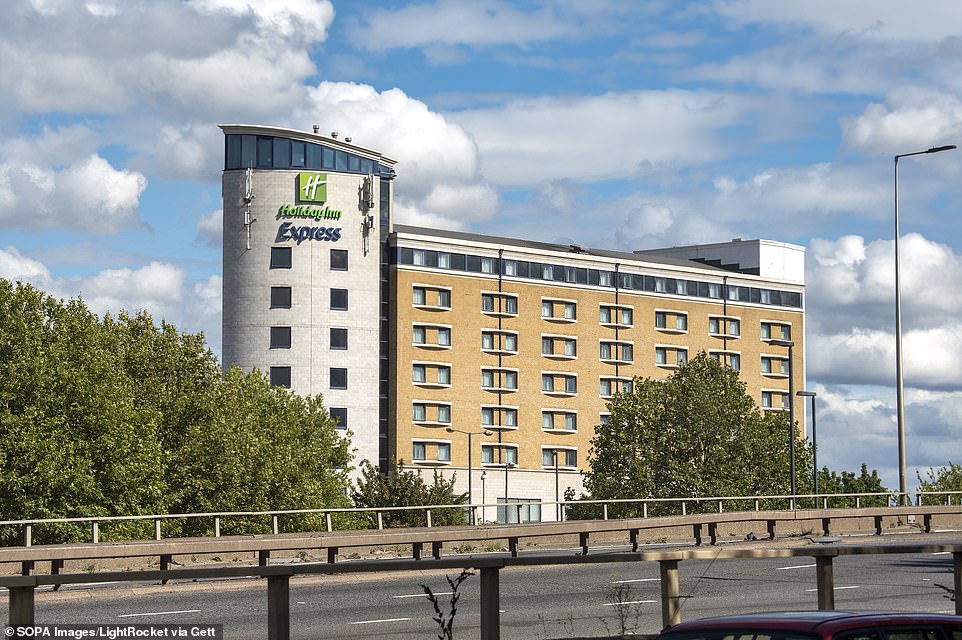 Abode Hotels received the lowest score of the eight small and medium-sized chains ranked in the survey, but still came in with a respectable score of 63 per cent, and four-star ratings for cleanliness, customer service and value for money.

Rory Boland, Editor of Which? Travel, said: ‘It appears that not even a global pandemic could force Britannia to clean up its act. At best, it’s drab and dated, and at worst it’s downright filthy – and after eight years at the bottom of our survey, our message is loud and clear: avoid these hotels.

‘While Premier Inn remains a firm favourite, it’s clear that this year, UK hotels have become more than just a place to lay your head, but a destination in themselves. With fewer of us travelling abroad this year, our survey shows that when it comes to holidaying at home, we’re quite happy to pay more for a little luxury.’

12/05/2020 Travel Comments Off on Britannia is named worst hotel chain for EIGHTH year running by Which?
Recent Posts
We and our partners use cookies on this site to improve our service, perform analytics, personalize advertising, measure advertising performance, and remember website preferences.Ok