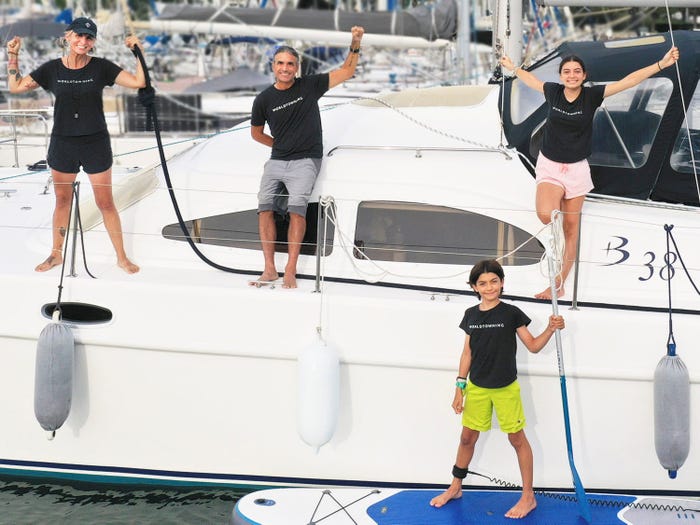 The Sueiro family is not one to take the easy road.

When they lived a comfortable life in Boston, they decided to move abroad. When they immersed themselves in South American culture, they moved into an RV and traveled throughout Europe. When they got bored with that, they ventured to Asia.

Jessica and Will Sueiro, who run a travel company, have been trekking around the world since 2013 along with their teenagers, Avalon and Largo, in tow. The family of four has lived in South America, Europe, and Asia.

Now, the family is embarking on an entirely new adventure. After the coronavirus pandemic put a halt to their travels, they decided to take a completely different route: They moved onto a sailboat full-time … with zero sailing experience.

Keep reading to find out how the Sueiros decided to live outside of the norm and what their new life on the water looks like.

While living what they call an "ordinary American life" in Boston in 2013, Jessica and Will Sueiro started planning for a very different future. 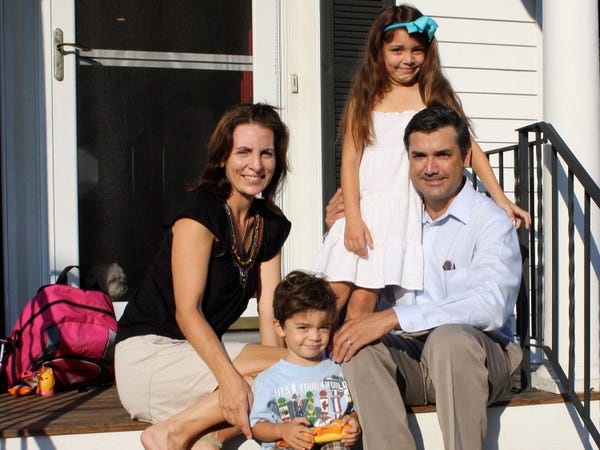 Jessica and Will were living in Boston with their two children when a summer trip to France sparked their interest in international travel.

As a family, they decided to uproot their life and move to a different country.

"We loved our community, our friends. We didn't leave because we were unhappy. We decided to leave and travel full time because we wanted this for a very long time," Jessica said.

After deciding they wanted to live abroad, they spent 12 months planning a strategy. 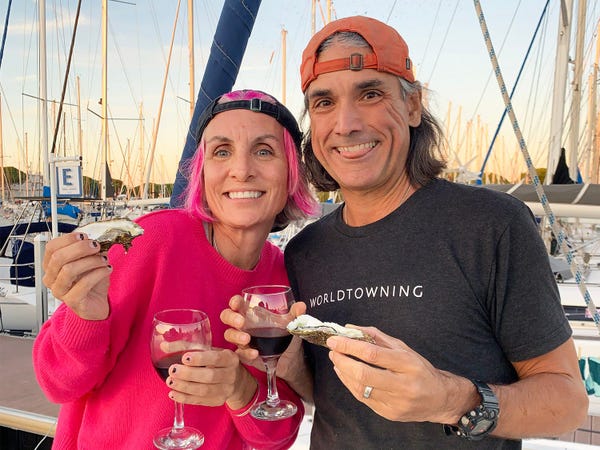 "'How can we go live in another country, how can we make this work, how do we do this financially, and how do we educate the kids?'" Jessica said. "That year was incredibly, incredibly hard. In the evenings at 9 p.m., Will and I would sit down and try and figure out all the logistics of what it takes to leave our traditional, stationary life and become travelers."

On April 23, 2013, Will was volunteering at the finishing line of the Boston Marathon when a bomb exploded, killing three. It was an eye-opening experience for the couple. They realized if they wanted to travel, it was "now or never."

In 2013, they moved to Costa Rica. At first, the couple said the transition was extremely difficult for the family. 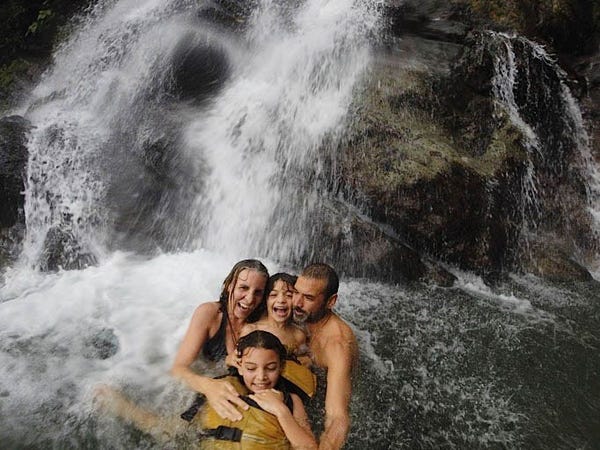 The family moved to a Costa Rica and then Ecuador. Their daughter was 10 and their son was 6 years old.

"We hadn't factored in the emotional impact of transitioning into a completely new normal for us," Jessica said. "We just said, 'We can do this. We can do hard things. We will get through this.' And we did. Thank goodness, we stuck it out. But it was very, very, very hard."

Eventually, they adjusted to their new life. They said they loved immersing themselves in the culture, especially becoming close friends with the locals.

After three years of living in Central and South America, the family was ready for a completely new change — again.

After that, the family moved into an RV and visited every country in Europe. 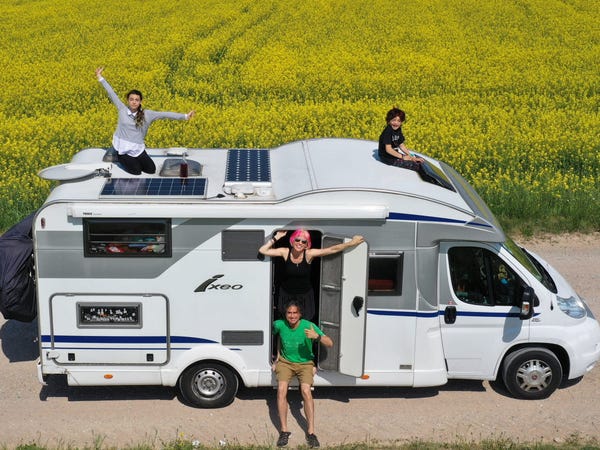 For the first three years after leaving Boston, the family enjoyed living long-term in foreign countries. Eventually, that changed.

"Believe it or not, we were all kind of getting a little tired of [living in one place], and the kids had always wanted to live in an RV, so that's when we came up with the idea," Jessica said.

They planned on doing it for one year, but they lived in their RV for almost three years, traveling all over Europe.

In 2019, the family moved continents again and explored Japan for five months. They planned to travel throughout Asia, but the coronavirus pandemic led them to a difficult decision. 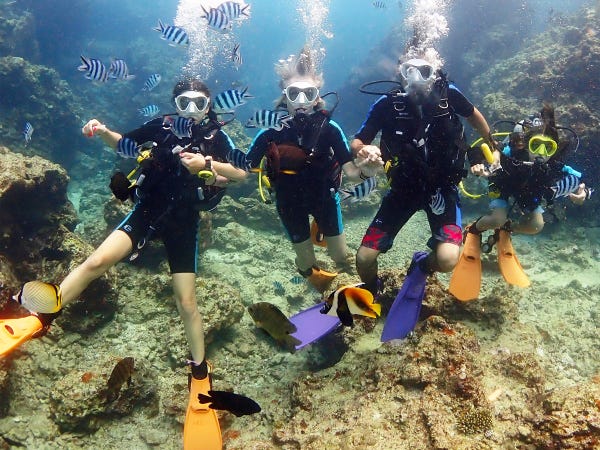 The plan was to spend a month in 12 different countries in Asia, but COVID-19 hit when they were in their very first country: Japan. Instead of the one month, they ended up spending five months there.

"It's one of the countries we completely adore. However, we don't like being in one place for that long," Jessica said.

The family discussed buying a temporary home and taking a break from travel, but the children didn't want that. Then, while scrolling through Facebook one day, Jessica spotted a sailboat for sale, and the family spent the next two weeks researching it.

They're now living on the sailboat full-time at a dock in France. 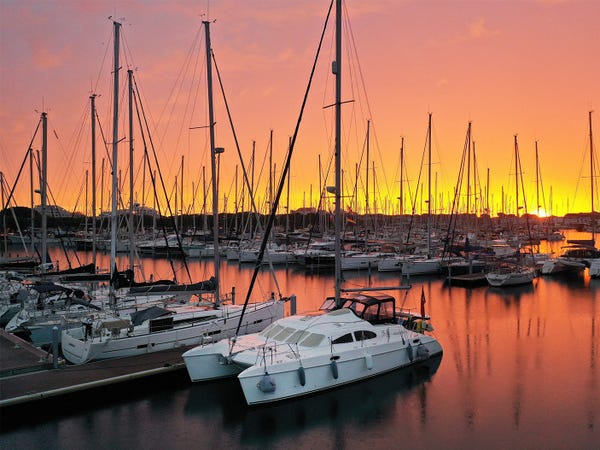 "I know it sounds insane to buy a boat in the middle of COVID and learn this new skill with absolutely no experience. But why not?" Jessica said. "What else are we going to do with the lockdown? We might as well learn something new and go after another big dream, and so that's kind of how the boat evolved."

The boat is larger than the RV and any other place the family has lived. 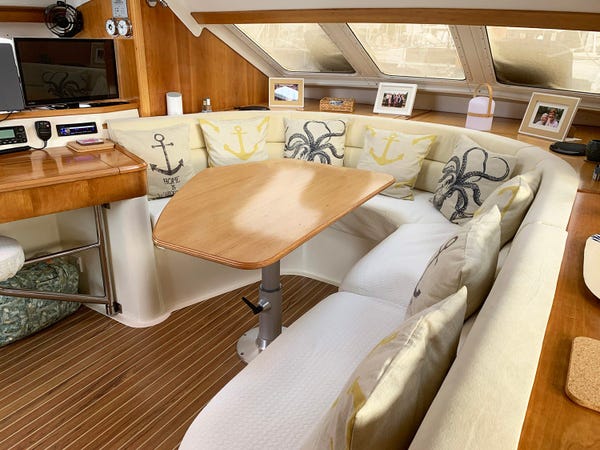 There's a large seating area where the family can hang out and enjoy meals together.

The galley kitchen is also a step up from their previous living situation. 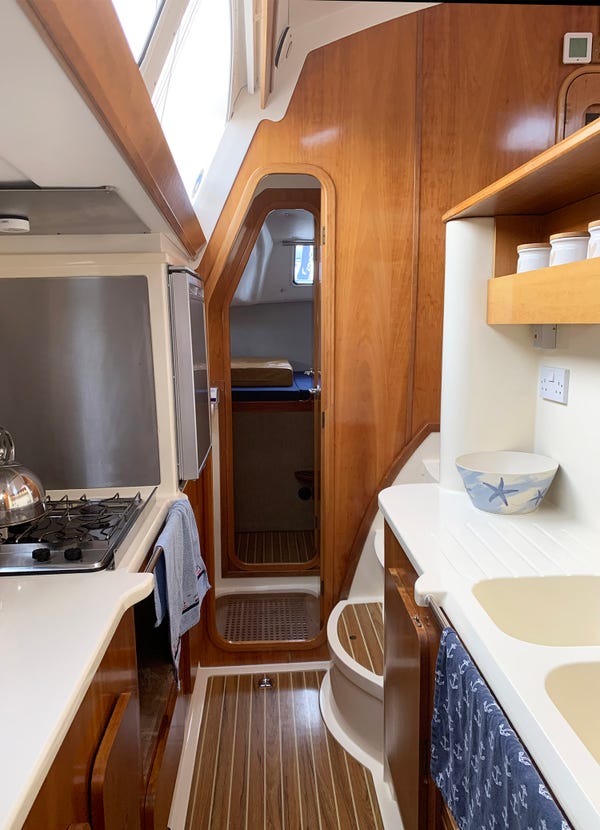 Will explained that they haven't had an oven in seven years, so the fact that the boat has a stovetop and an oven is a game-changer for the family.

The master bedroom has a queen-size bed — yet another luxury. 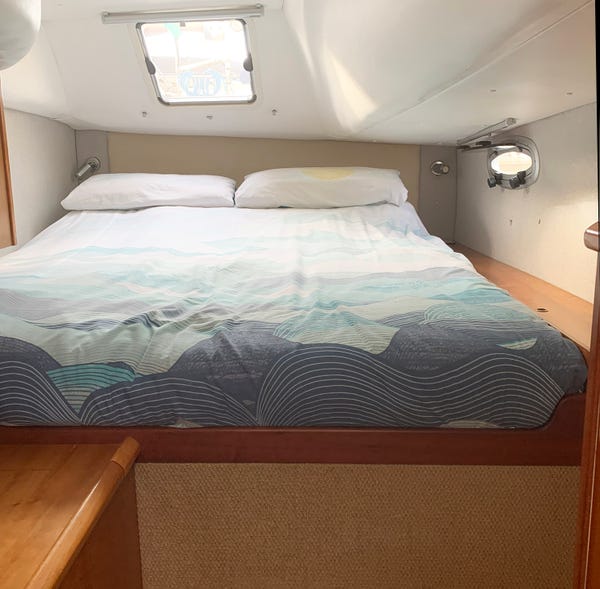 "They have top-of-the-line mattress toppers on it, and after sleeping on an RV mattress for two and a half years, we love this," Jessica said. "We're simple people."

"As you can tell, we're easily impressed," Will joked.

Jessica and Will also have their own bathroom, which has another life-changing luxury: a washing machine. 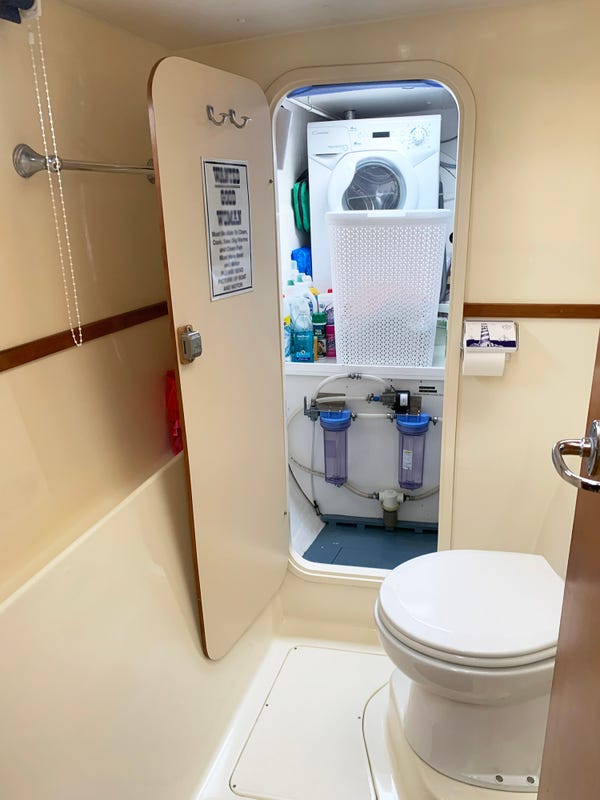 "We didn't realize how much of that would be sort of the game-changer for us," Will said.

The children, who are now 16 and 13, also have their own bedrooms. It's the first time in seven years they've had their own space. 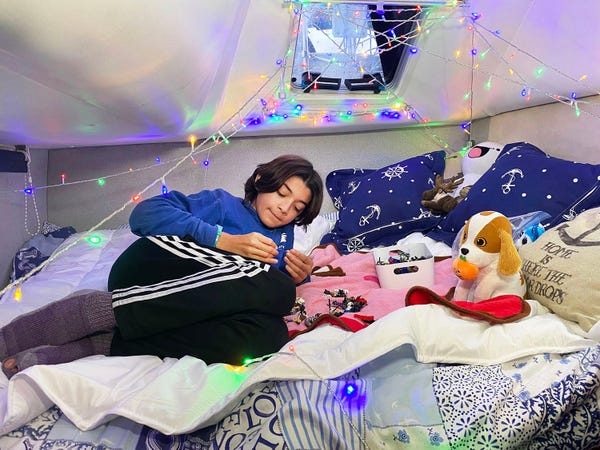 Will described the bedrooms as "super, super large compared to the RV," where the children shared a bunk bed.

"That's the interesting thing," Jessica said. "I know it sounds crazy because we're on a boat, but it feels very big for us. It's all relative to how you put it."

The couple explained that the extra square footage came at the perfect time, just as their teenagers needed their own space. 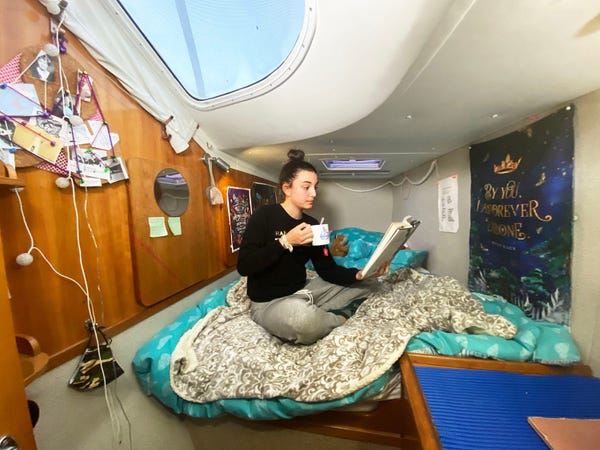 "I don't believe teenagers need a huge space, but they need a place that they can go to with their own thoughts," Jessica said.

She explained that the family is a "democracy, not a dictatorship," so Avalon and Largo have a voice in the decision-making process. In fact, they were the ones pushing to live on a sailboat instead of settling down in a permanent home, the couple said.

"We have lots and lots of conversations where we ask how's everyone doing, 'do you enjoy this,  or do you want slower travel?'" Jessica said. "The answer is always absolutely not. [The teenagers] weather the storm really well."

Together, the family is adjusting to yet another new normal on their sailboat. 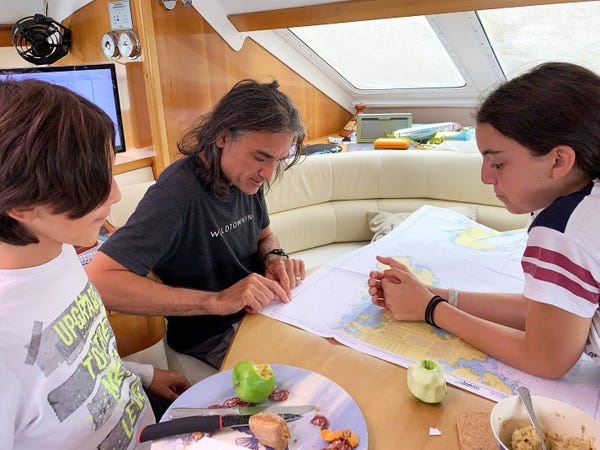 They said they haven't left the dock in France yet because they don't have the proper sailing certification, but they can't get it until France comes out of lockdown and starts classes back up.

"Our hopes and dreams of being able to sail all throughout the winter and wind up in Sicily at this point have fizzled and now we're sitting in the dock and learning," Will said.

For now, the family is anxiously awaiting their future on the seas. 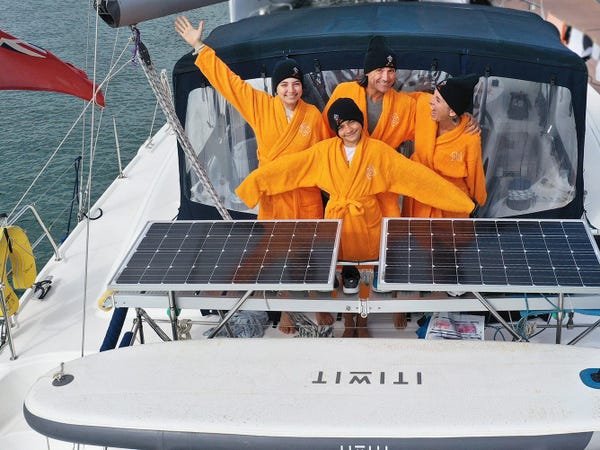 Once they get their certifications, they plan to sail around Europe and build up experience so they can eventually sail across the Atlantic Ocean.

But right now, they are enjoying their new-found space and the creature comforts of their sailboat.

"I feel like we're 20 and we just bought not the starter home, but the second home — the dream home," Jessica said.

Will added, "I feel like we just moved into our forever home."

Do you live in a tiny house, RV, camper van, or other unusual housing structure and want to share your story? Reach out to Frank Olito at folito@businessinsider.com

12/16/2020 Travel Comments Off on After traveling the world for 7 years, a family of 4 now calls a 30-foot sailboat their ‘forever home’ — take a look inside
Recent Posts
We and our partners use cookies on this site to improve our service, perform analytics, personalize advertising, measure advertising performance, and remember website preferences.Ok