At the onset of the coronavirus pandemic, with travel restrictions in place worldwide, we launched a new series — The World Through a Lens — in which photojournalists help transport you, virtually, to some of our planet’s most beautiful and intriguing places. This week, Alex Ingram shares a collection of images from small British islands.

The waters surrounding Britain are speckled with thousands of small islands, only a small fraction of which are inhabited, some by as few as one or two people.

Among those who call Britain’s small islands home are a collection of wardens — caretakers who spend their lives in quiet solitude, away from the crowded corners of our urban world. Often employed by nonprofit conservation groups, their role is to maintain and manage the preservation of their small speck of land — its natural beauty, its wildlife — for future generations, often while conducting research into delicate ecosystems. 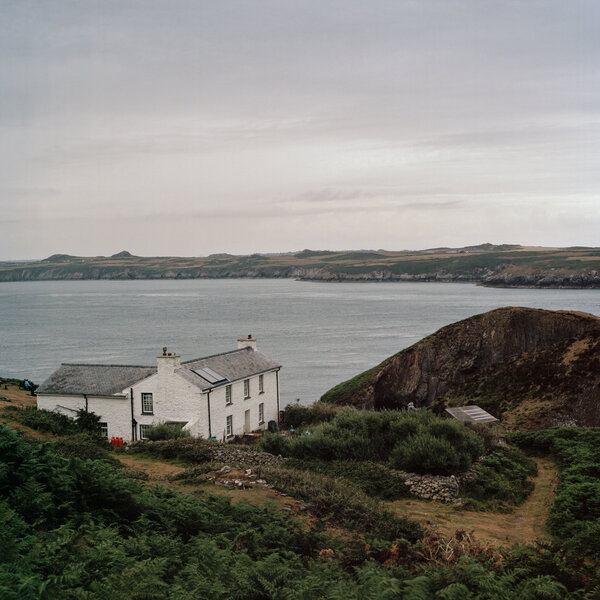 Wardens have limited access to the mainland during the winter months, aren’t guaranteed fresh running water, and often live under the threat of harsh storms and perilous currents that can leave them marooned for weeks at a time. Food is delivered once a month by boat. It’s not a role that many are suited for. And yet a growing number of people are dreaming of this simple way of life, seeking to trade the madness of our busy cities for a self-sufficient life among nature.

Over the past three years I’ve been visiting some of these remote islands, spending at least a week on each and experiencing firsthand what life is like there. Growing up in the tiny Welsh city of St. Davids, in Pembrokeshire, I heard countless tales about one island in particular: Skomer, a tiny jewel in the Irish Sea, filled with history and wildlife, including many thousands of puffins.

Later, when I’d moved to London, I heard stories about Ed Stubbings and Bee Büche, the two wardens who lived on the island year-round, and I couldn’t stop thinking about how different their life must be compared to mine.

In 2017, I chartered a small fishing boat from the tiny bay of Martins Haven, in South Pembrokeshire, and traveled across the choppy waters to Skomer Island, embarking on the first trip of what would later become an ongoing photographic chronicle called The Gatekeepers.

Within 30 minutes of arriving on Skomer, I was strapped into a harness and was following Ed and Bee across the island. We abseiled down a 60-foot cliff onto the rocky bay below in order to monitor seal pups.

I fell in love with the way of life on the island — the people, the landscapes, the pace. A few months later, I arranged a helicopter flight across the 12-mile stretch of water to Lundy, an island in the Bristol Channel. Soon I was hopping all around Britain — to Bardsey, Skokholm, Flat Holm, Ramsey.

Throughout my journey I explored some of the most beautiful scenery and wildlife I have ever seen: dramatic shards of granite standing tall and strong against crashing waves; luscious green woodland filled with sika deer; rolling hills and cascading peninsulas; tiny shearwater chicks, hidden in the thrift along the cliff edge, sheltering from brutal winds.

Britain’s islands vary in size and population. Flat Holm, for example, a speck of land that includes the southernmost place in Wales, has just two full-time residents and is a third of a mile wide — but has its own pub. Lundy, on the other hand, has a staggeringly large population — by small island standards, anyway — of 28. (It also has its own pub.)

When I began visiting these places, I held the misconception that island living would be desolate and lonely, and that the people would prove to be introverted nomads, having run to the hills to flee human contact. But the more time I’ve spent on these islands, the more I’ve come to realize how misguided my assumptions were.

What I found instead were small communities of people who established a deep sense of connection with one another, who worked hard and felt passionate about conservation, and who were consistently warm and welcoming to visitors.

In many ways, life as a British island warden has become less isolating in recent years. Warden stations have electricity and internet access, and all of the wardens I met carried cellphones. During the warmer months, many of the islands are visited regularly by tourists — hikers, bird-watchers, ecologists — from the mainland. But come October, the boats stop and the islands’ wardens are left on their own.

The job requires a great deal of resourcefulness — and diplomacy. (When you can’t avoid your neighbors, petty disputes quickly become untenable.)

Each island I’ve visited has its own personality and its own charms. But there’s also something about island life that connects all of them. It’s evident in the camaraderie I feel between the wardens and their fellow island dwellers, and in the consistent and communal sense of purpose.

Ed and Bee have since left Skomer and migrated farther north, to the Scottish island of Islay, where they’re currently doing wildlife conservation work. Sian Stacey, the warden of Bardsey Island, moved back to the mainland in order to start a family — though she dreams of one day returning to island life.

It’s a dream I’ve come to know myself. The pull of these places can be hard to resist.

10/12/2020 Travel Comments Off on A Glance at Daily Life Among the Caretakers of Britain’s Small Islands
Recent Posts
We and our partners use cookies on this site to improve our service, perform analytics, personalize advertising, measure advertising performance, and remember website preferences.Ok