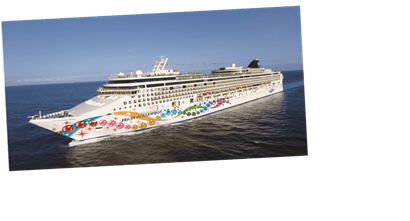 Norwegian Cruise Line Holdings Ltd., the parent company to Norwegian Cruise Line, Regent Seven Seas Cruises and Oceania Cruises, announced Monday it will require all passengers and crew on its ships to be “100% vaccinated” two weeks before boarding.

“That one-two punch is ironclad,” Frank Del Rio, the company’s president and CEO, told USA TODAY Monday, pointing to the new vaccination requirement and health and safety protocols that the company has said will be implemented on board. “No one can argue that being on a cruise ship under those conditions is not the safest place on earth.”

The requirement comes on the heels of additional guidance for cruise ships released by the Centers for Disease Control and Prevention on Friday as part of its Framework for Conditional Sailing Order, initially published in October, which is meant to help guide cruise lines as they return to sailing.

Norwegian shared a letter written by Del Rio, the company’s president and CEO, addressed to CDC Director Rochelle Walensky on Monday outlining its plans to resume sailing with intent to have vessels depart with vaccinated passengers and crew starting in July.

The “intention,” Del Rio said, is for the vaccination policy to apply to all ships, no matter what port they depart from. And there is no age group that will be exempt from the vaccination requirement.

“Norwegian Cruise Line Holdings is simply taking a cue from the CDC and putting together a comprehensive, robust, scientific-based plan that allows us to operate just like airlines are operating, casinos, resorts, theme parks, ballparks are now operating,” Del Rio said, referencing Friday’s announcement from the CDC that fully vaccinated people can travel at low-risk.

In his letter to Walensky, Del Rio laid out plans for resumption including that:

Vaccinations, paired with other requirements, will create a “bubble-like” environment on board, according to the letter.

“By requiring full and complete vaccinations of guests and crew, we believe our extensive health and safety standards share in the spirit and exceed the intent of the CDC’s existing Conditional Sailing Order (‘CSO’) to advance public health goals and to protect guests, crew and the communities we visit,” Del Rio wrote in the letter, requesting that the CDC lift its order for Norwegian vessels departing from U.S. ports starting July 4.

“We’re asking to cruise 90 days from today,” Del Rio told USA TODAY. “90 days from now in COVID-19 world is a lifetime, and we believe that lifetime will evolve for the positive.”

He said that while there has been “great discussion” on how to use technologyto prove one’s vaccination status, that kind of database isn’t ready yet and won’t be for some time.

“In the meantime, we’ll use paper,” Del Rio said, noting that Norwegian will accept whatever “paper-driven” proof people have, including vaccination cards, certificates and letters from physicians. “We will have standards of course; we will peruse them carefully. We understand the risks of paper but the reality is that the digital technology simply won’t be ready for quite some time.”

Norwegian isn’t the only cruise line that has said it will require proof of vaccination to board. In March, Royal Caribbean announced that on certain sailings it will require passengers and crew to be vaccinated. Crystal Cruises and Virgin Voyages have also announced a vaccine requirement.

Vaccine passports:  How to prove you’ve gotten your COVID-19 shots for travel and avoid scams

Who will issue them?  The documents should be free, private and secure, White House says, but who will be in charge of handing them out?