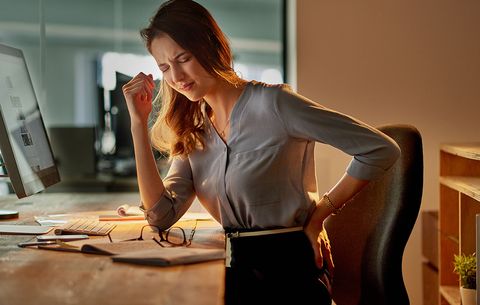 Let’s get one thing straight: Carrying another living being inside of your body is no small feat, so it’s totally understandable to feel on edge about it…or to worry about a miscarriage.

You’re also not alone in your anxiety—according to one 2015 study published in the journal Obstetrics & Gynecology, 41 percent of women surveyed who’d had a miscarriage felt like they did something wrong—and many (incorrectly) believed that lifting heavy objects or being super-stressed may have caused their miscarriages.

In reality, miscarriages (a.k.a. a loss of pregnancy before 20 weeks) happen in about 10 percent of known pregnancies, according to the American College of Obstetricians and Gynecologists (ACOG)—and half the time, those miscarriages are due to chromosomal abnormalities that can’t be prevented.

While sometimes women can experience recurrent miscarriages (two or more consecutive pregnancy losses—a condition that needs to be checked out for an underlying cause like genetic defects or chronic conditions) most times, miscarriage is an isolated event. Couples will often go on to have successful pregnancies.

Still, that reassurance can only go so far—especially when faced with any twinge, bleeding, or cramping during pregnancy. If you’re worried at all, certainly reach out to your doctor who can tell you if you need to be examined. And, just because you notice some of these signs of early miscarriage doesn’t mean there’s anything wrong either.

That said, it doesn’t hurt to be informed about potential red flags—here are the early miscarriage symptoms you should look out for when you’re expecting.

While, yes, bleeding is a sign of a miscarriage, it depends on what kind of bleeding you’re experiencing: Spotting, for example, might be completely normal. “As the fertilized egg burrows or implants into the uterus, you may see some spotting,” says Kecia Gaither, M.D., an ob-gyn and maternal fetal medicine specialist. You can also experience bleeding behind the developing placenta, she says.

Bright red blood and heavy bleeding, however, should sound alarm bells, says Gaither. If the pregnancy continues after some bleeding, it can be called a threatened miscarriage, and needs to be monitored by an ob-gyn, per the U.S. National Library of Medicine.

While some bleeding and spotting might be normal (i.e., no cause for concern) during pregnancy, clotting of any kind should trigger you to call your ob-gyn. Some clots can even grow to be as big as a lemon, per Planned Parenthood.

Your body may also pass other tissue (which will look a lot like heavy bleeding), or a light-pink vaginal fluid. Either way, if you’re pregnant and you notice something off with what’s coming out of your vagina, it’s time to see a doc.

3. You have pain and cramping—like PMS.

When it comes to cramping, menstrual-like cramps can be totally normal as your uterus begins to expand, says Gaither. Other times, cramping can be a sign of an early miscarriage. “The cramping is from the uterus contracting trying to expel the pregnancy,” says Gaither.

Bleeding and cramping might also be signs of other pregnancy problems, like ectopic pregnancies (when a fertilized egg attaches itself somewhere outside of the uterus—usually to a fallopian tube). So if you’re experiencing bleeding and cramping after learning you’re pregnant, it’s good to get checked out, regardless.

4. Your back is killing you.

Just like cramping, you may also feel a lower backache that can range from mild to severe discomfort. Though, again, this can be normal in a healthy pregnancy, too. The best advice is boring, but true: Always talk to your doctor if you’re concerned about your symptoms—they’re there to help you in every way they can.

5. Your ob-gyn doesn’t find a heartbeat.

To be fair, this isn’t a symptom—but that’s because sometimes there aren’t any symptoms with a miscarriage. It may also be as simple as not feeling pregnant anymore, according to Planned Parenthood.

In other situations, women can have a “nonviable pregnancy,” says Gaither. (You may hear women also call it a missed miscarriage.) It happens when a pregnancy fails to progress, especially in the first trimester. You may notice that symptoms you felt before (nausea, for instance) have disappeared, though these may not go away until hormone levels have decreased, says Gaither.

If your period usually comes like clockwork, but arrives a little late this time (and you’ve been having unprotected sex), you may have experienced a chemical pregnancy, says Gaither.

This usually happens without you even knowing about it (unless you’re trying and you take a pregnancy test). Basically, a chemical pregnancy occurs when the egg and sperm meet, implant, and your body produces the hormone HCG, but things fail to develop further, says Gaither. Chemical pregnancies may make up 50 to 75 percent of all miscarriages, says the American Pregnancy Association.