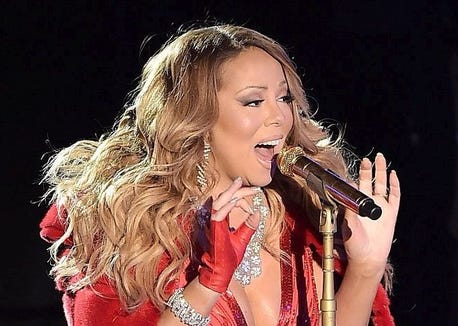 Mariah Carey dropped shared a short video on Twitter of herself and her twins singing the iconic "All I Want for Christmas is You." (Photo: Getty Images)

We all sing along when Mariah Carey’s “All I Want for Christmas is You” comes on the radio, don’t we?

No? Hmph. Then you’re seriously lacking in holiday spirit.

We got a rare treat this week when the queen herself, looking fabulous and festive, tweeted a short video of her singing the 1994 classic. BONUS: Her 7-year-old twins, Moroccan and Monroe, perform with her, looking adorable in Santa hats.

Although the kids are relegated to background vocals. Because, Mariah.

But there were more than a few comments on why the twins didn’t have seat belts on.

Carey’s holiday song is so beloved it returns to the music charts every year.

Fans of Carey get a double-dose of the diva recently when she released her 15th studio album, “Caution,” and announced a 22-city Caution World Tour, which kicks off in February.

12/01/2018 lifestyle Comments Off on You have to hear this: Mariah Carey and twins belt out ‘All I Want for Christmas is You’
Recent Posts