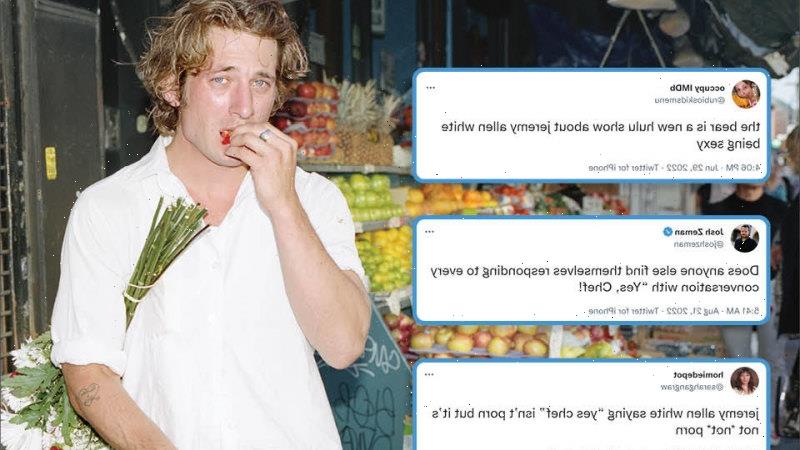 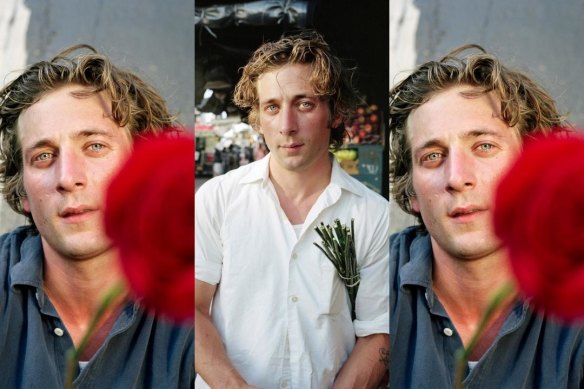 The premise of Christopher Storer’s eight-part FX series seemed familiar on the surface: in the aftermath of his older brother’s death, Carmen “Carmy” Berzatto, a fine dining chef, is summoned home to Chicago to save the family’s ailing sandwich shop, known to regulars as The Beef.

Carmy (played by Shameless star Jeremy Allen White) returns to The Beef broken by stress, death and mounting debt. Motivated by the misguided conviction that if he can just turn The Beef around, things might be OK, Carmy grinds himself into the ground.

With varying degrees of success, he makes sweeping changes, banishing the old-school spaghetti from the menu, overhauling the braised beef recipe and rigidly applying his classically trained chef sensibilities to The Beef’s not-so-classically trained staff. 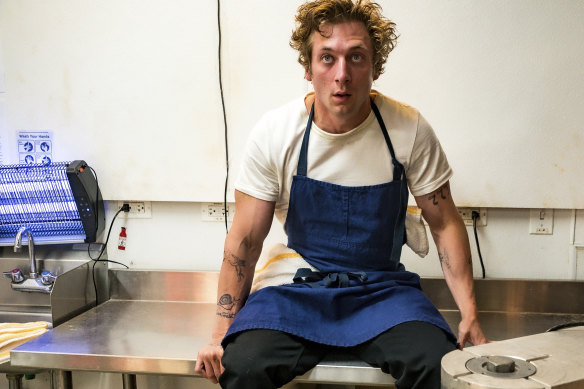 Jeremy Allen White plays chef “Carmy” Berzatto, who returns to Chicago to work in the scuzzy sandwich shop he inherited from his family.Credit:Matt Dinerstein/FX

Once audiences had time to digest all eight episodes (available in Australia on Disney + from August 31), it became clear that The Bear had achieved something remarkable: it packaged up our anxiety and made it watchable.

Everyone and everything at The Beef is always moments away from falling apart – toilets explode, fuses blow, and bills go unpaid – and Carmy pinballs from crisis to crisis, trying to keep it together. Sound familiar?

Early reviews celebrated The Bear’s relatable dread. Rolling Stone called the show “The Most Stressful Thing on TV Right Now. It’s Also Great,” while The New York Times embraced the unflinching portrayal of modern life: “The notion that hustle will eventually pay off is an insidious pipe dream.”

As the hype went from a simmer to a boil, one key factor helped elevate The Bear into a Michelin-starred series in a sea of otherwise edible TV: Carmy.

Audiences were salivating – not for The Beef’s menu but for its tortured chef, with all his tousled hair and blank stares. Thirsty “Yes, Chef” memes flooded social media, turning kitchen slang into a sexy catchcry. Even The New Yorker got in on the act, running a cartoon featuring a post-coital couple lying in bed, accompanied by the caption: “So … what was all that ‘Yes, Chef’ stuff about?” Elsewhere, think pieces dissected everything from Carmy’s tattoos to his T-shirts. A personal favourite: “We Asked the Costume Designers of ‘The Bear’ Where To Buy Carmy’s Sexy AF White T-Shirt.” 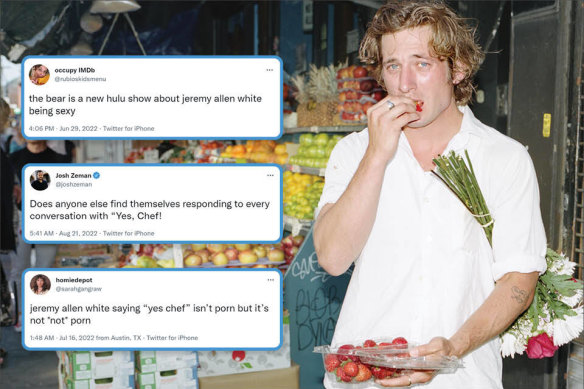 All of this makes it even more remarkable that Jeremy Allen White nearly passed on the role. When The Bear came calling, White had just wrapped up a decade playing Phillip “Lip” Gallagher on another Chicago-based series, Shameless. The show ran for 11 seasons between 2011 and 2021, and White appeared in all 134 episodes, leaving him seeking a new challenge.

“I thought I’d take a year off and try to do some film work, but my agents called and said Christopher Storer had a script for me. He had produced a movie I shot a few years ago called The Rental, and we had similar taste in film and television,” White says over Zoom from his New York home.

White is softly spoken and innately calming. At one point, he excuses himself to soothe his crying 18-month-old daughter, Dolores, and I’m not surprised when he returns a moment later to say she’s settled. Yet his blue eyes have an emotional intensity tailor-made for a character teetering on the edge.

White’s reluctance to take on another series is understandable (a decade is a long time in any job, but in TV years, it’s an eternity), but then he read the pilot.

“I think what clicked, and why my heart broke for Carmy, was that he seemed so lonely to me,” the Brooklyn native says. “So much of his identity was wrapped up in his profession, not only being a chef but being an excellent one. Then he loses his brother, loses everything really, and all that remains is this restaurant.”

Yet The Bear doesn’t seek to lean into that archetype, but to interrogate it. It doesn’t idealise Carmy. He’s more mess than hot mess. When he smokes, it isn’t sexy in a dangerous way, it’s just dangerous (one of his discarded cigarettes triggers a kitchen fire).

Sure, Carmy looks great in an apron, but there is no hook-up on the horizon; his kitchen is a zone free of sex, romance and love. White says that he was surprised by audiences’ lust for Carmy given the show’s chastity.

“What’s interesting is that there is no sex on the show; I don’t think Carmy is thinking about romance or sex or any of that,” White says.

“When you picture the tortured bad-boy chef, you might think of sex in the walk-in pantry or whatever, but there is none of that, so I’m surprised at the response because it just wasn’t even a consideration.” 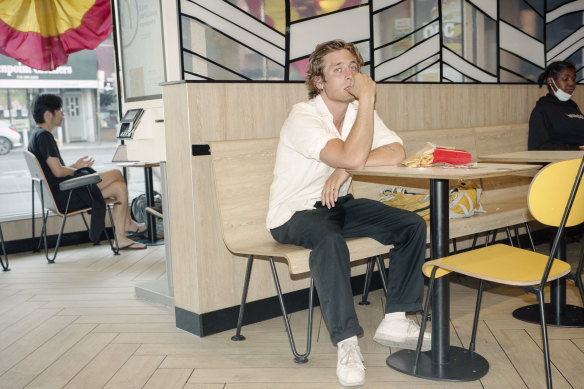 Perhaps the absence of sex is an indictment on us: take it away, and it’s all we can think about. It also doesn’t hurt that Carmy happens to be quite good at cooking.

“I admire his determination and skill, and they’re attractive in any field, right? Those are things that I find attractive,” White says.

Determination and skill are two qualities White witnessed in an abundance during his preparation and training for the role. First came a two-week crash course at the Institute of Culinary Education in Pasadena, California.

“I was thrown into classes with these incredible students doing the eight-month program, so I just spent the whole time apologising,” White laughs.

But the real test was working the line at Pasjoli, a one-star Michelin upscale French bistro-inspired restaurant in Santa Monica, California.

“Chef Dave Beran is head chef there, and it’s a serious spot, so I was happy to be a fly on the wall, just try and understand the choreography, the language of a kitchen,” White says.

“But eventually, Chef Dave pushed me onto the line, and that’s where I found my confidence because it’s survival at that point. You feel responsible for the people next to you, to Chef, the customers and the restaurant’s name.” 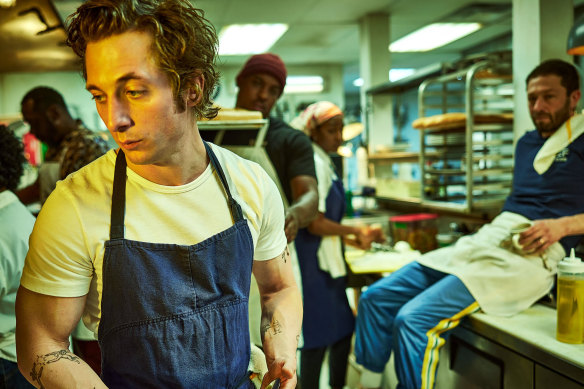 Jeremy Allen White says he was surprised by the response to The Bear.Credit:Frank Ockenfels/FX

“Oh, I made so many mistakes, but they were so generous with me, and even though I was on the line, they were still keeping a watchful eye because nothing was leaving that kitchen unless it was perfect,” White says. “And experiencing that pressure was important because Carmy is consumed by it.”

Given their penchant for perfection, chefs could easily make for harsh TV critics, but according to the professionals, White, and the wider cast, captured the frenetic energy of a fast-paced kitchen.

In Bon Appetit magazine, Genevieve Yam, one-time pastry chef de partie at Michelin-starred restaurant Per Se wrote: “I could barely get through The Bear. Not because I thought it was bad television – but because it was the most accurate portrayal of life in a restaurant kitchen I’ve seen in a while.”

“I read that article, and I take it as a huge compliment, but it also makes me concerned for the environment these people were working in,” White says. “I always thought that [after The Bear] if I could walk into a restaurant and get a subtle head nod from the chefs in the back, then we’d succeeded.”

White’s version of success may be romantic, but in more measurable ways, the show is a hit: The Bear was renewed for a second season one month after it premiered, awards buzz is growing louder, and his phone has been running hot.

“In this last month, I’ve gotten in rooms with writers and directors that I think, even six weeks ago, might not have happened,” White says. “But I’m wary of all that; I craved instant success when I started Shameless, I thought I was doing great work, and more would come to me fast, so now my aspirations as an actor are to work with people that I admire on stories that I find interesting.”

In the short term, though, there are more pressing issues. Like, what’s for dinner? By the time we finish talking, it’s night-time in New York, and surely the man who launched a thousand cooking memes is on dinner duty.

“I hate to say this, but we’ll be ordering takeout,” White laughs. “I did so much cooking between the pilot and shooting the first season, but since the show’s come out, the last thing I feel like doing at the end of the day is cooking.”

The Bear will stream on Disney + from August 31.

08/23/2022 lifestyle Comments Off on Yes, Chef: How The Bear made Jeremy Allen White the internet’s favourite dish
Recent Posts