Crossing into enemy territory! Women reveal the most BIZARRE things they have found in boys’ bedrooms – from a TURTLE shell to a bath full of apples

It isn’t every day that you enter a bathroom to go about your business and stumble upon a kangaroo, a shrine to the Jonas Brothers or a chocolate fountain.

However, it wouldn’t be impossible, as people on Twitter are revealing the strangest things they have ever found in other people’s, in particular boys, bathrooms.

Hot sauce, lobsters, dishes and dozens of apples were just a few of the many hilarious and bizarre objects found in different bathrooms. 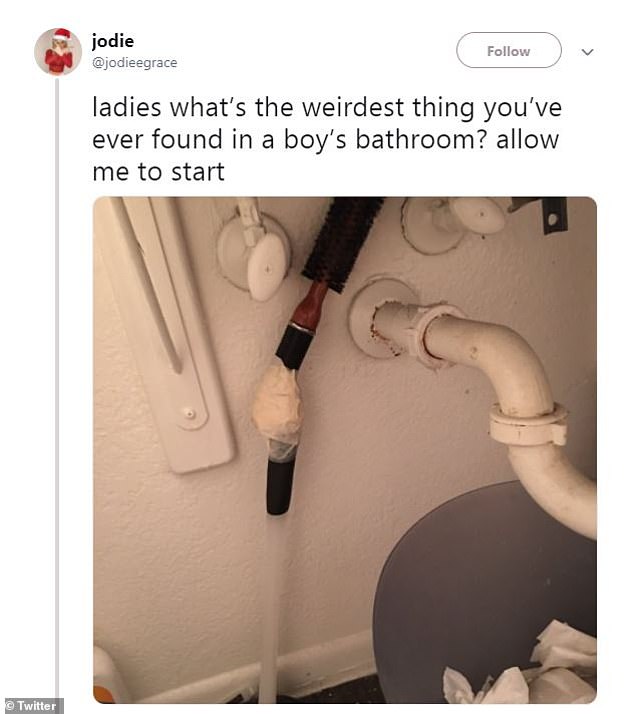 Weird and wonderful: Twitter user @jodieegrace asked people what the weirdest objects they have ever found in a boy’s bathroom on the social media platform on Friday 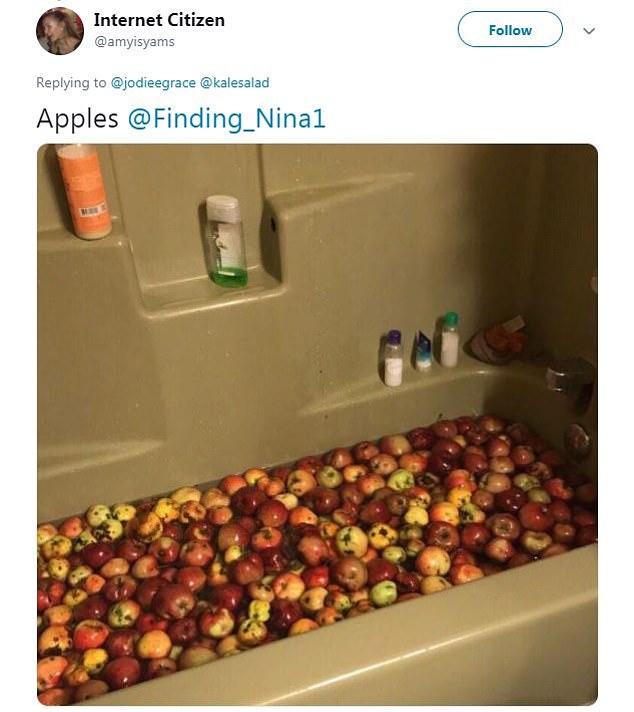 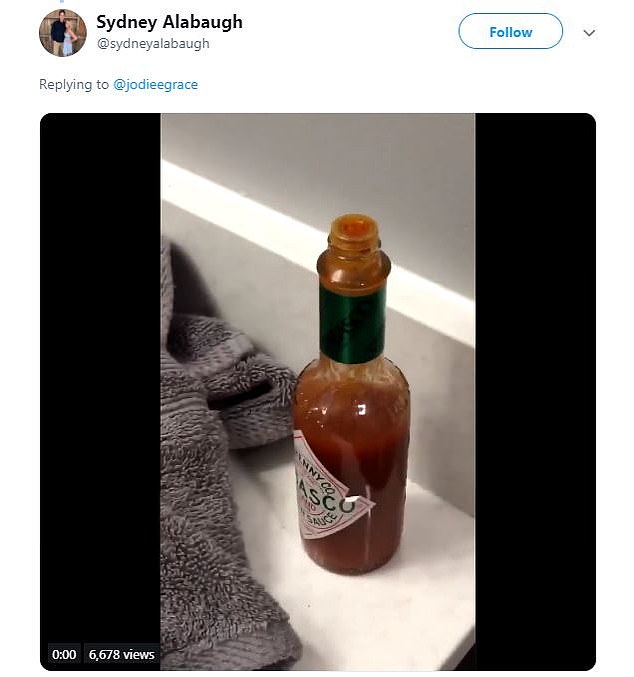 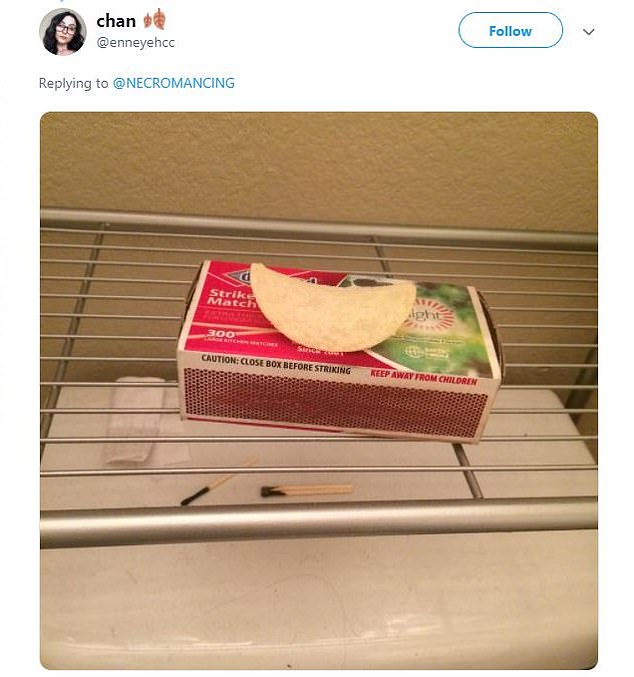 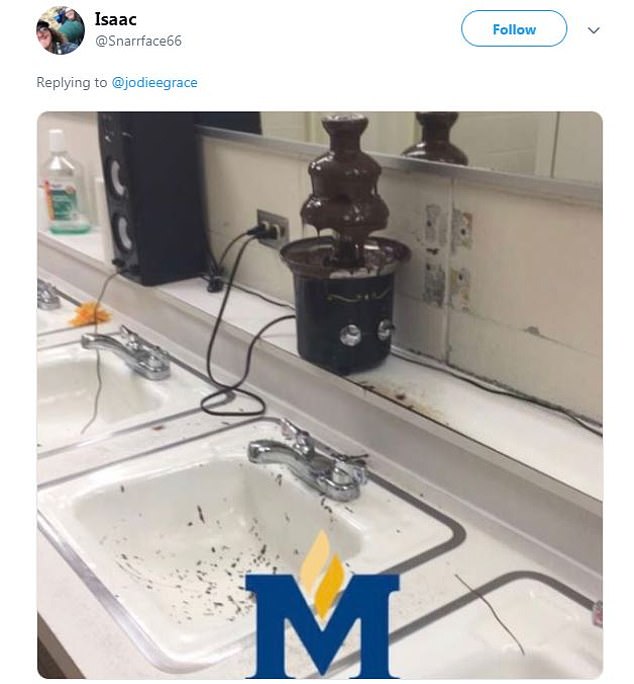 Foodie finds: Several Twitter users had previously found food or food-related objects in men’s bathrooms, including a chocolate fountain that was actually functioning (above)

Twitter user @jodieegrace asked people on the social media platform what the weirdest things they have ever spotted in a bathroom were on Friday, and she wasn’t left hanging.

Almost 1,400 people responded to the Tweet that read: ‘Ladies what’s the weirdest thing you’ve ever found in a boy’s bathroom? allow me to start,’ with which she shared a photo of, perhaps, what inspired her to begin the thread.

Several people shared photos of strange food-related objects they had found in boy’s bathrooms before.

One user revealed that she found a piece of leftover pizza in a bathroom cabinet, and another uploaded a video that showed a bottle of hot sauce sitting on a bathroom counter.

Similarly, someone else noticed dozens of apples lying in a bathtub filled with water, while another even spotted a functioning chocolate fountain standing on the counter top beside a sink.

A jar of banana peppers and a container of coffee creamer were also both found in and around bathrooms. 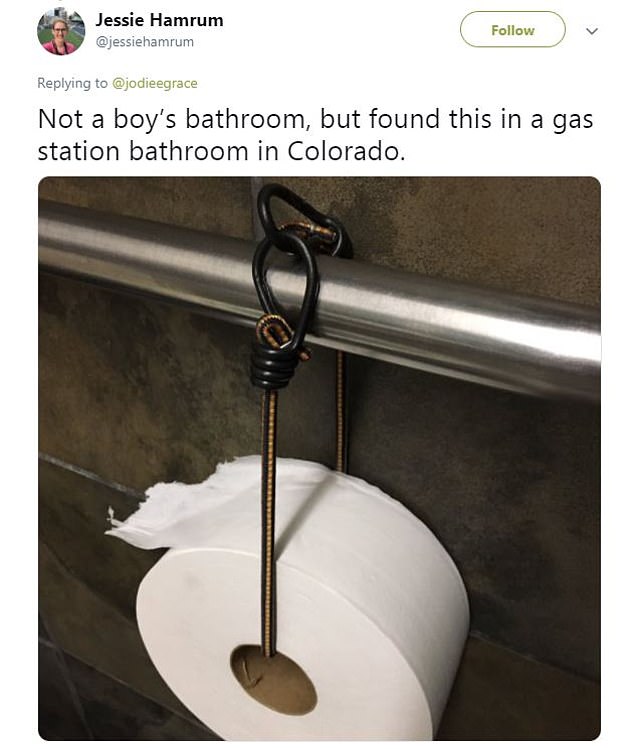 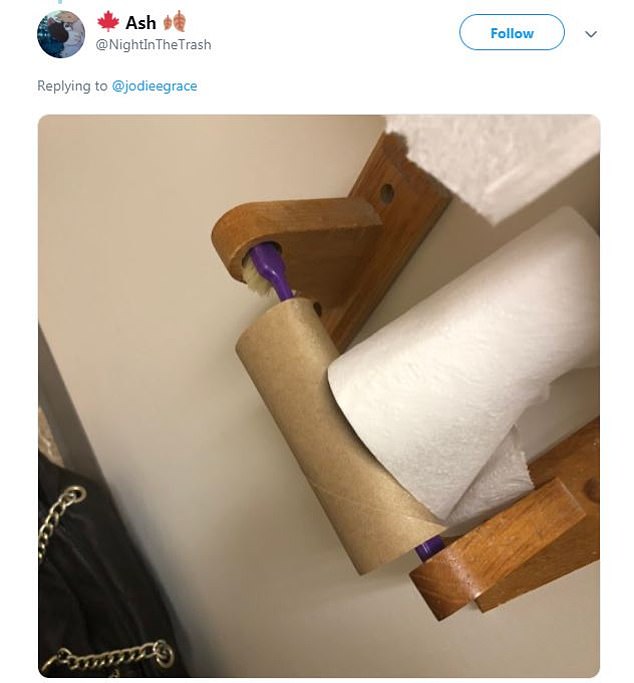 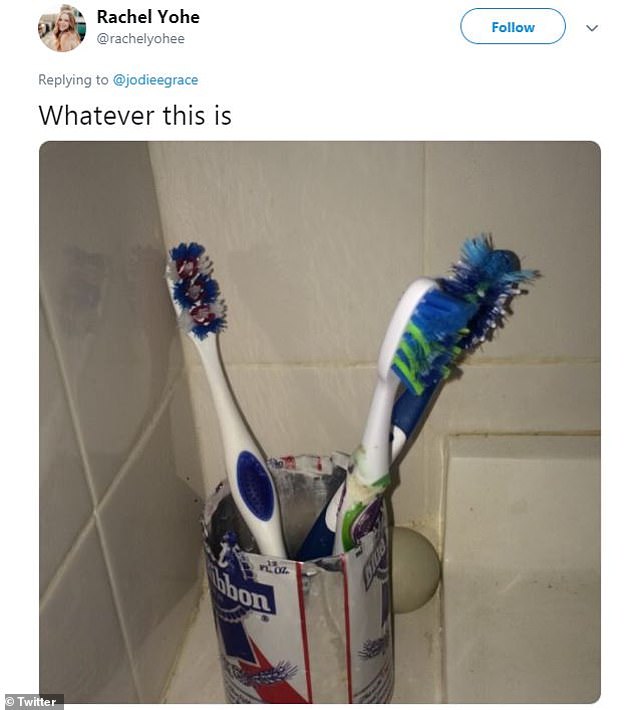 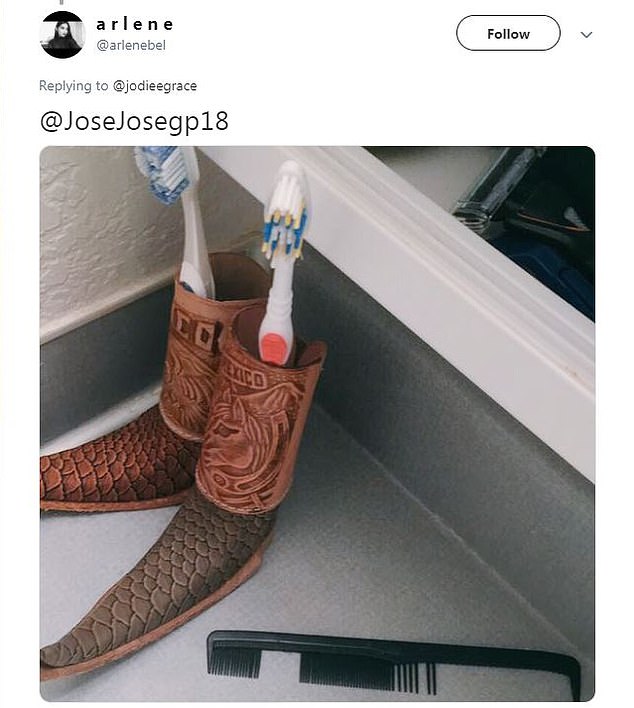 DIY: Several others shared photos of DIY bathroom supplies they had found in bathrooms, including make-shift toothbrush holders and toilet roll dispensers

Others shared photographs and anecdotes of the best and worst attempts at DIY bathroom objects, including a toothbrush holder made from an orange.

Perhaps one of the more slightly disturbing categories of random things found in men’s bathrooms was the number and variety of insects and animals.

A turtle shell and lobsters were both found in two separate bathrooms.

One user tweeted a photo of a kangaroo that she had bumped into while using a bathroom, and another uploaded a video of a duck swimming around a bathtub.

Another user shared a photo of a beaver surrounded by branches and foliage lying in a bathtub.

Shrines to different celebrities, icons and people in general was another popular category in the massive list of weird and wonderful things found in bathrooms. 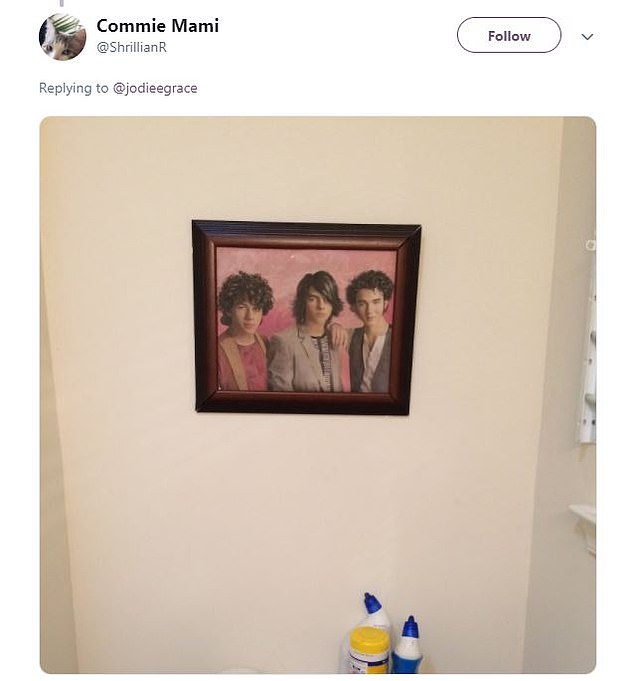 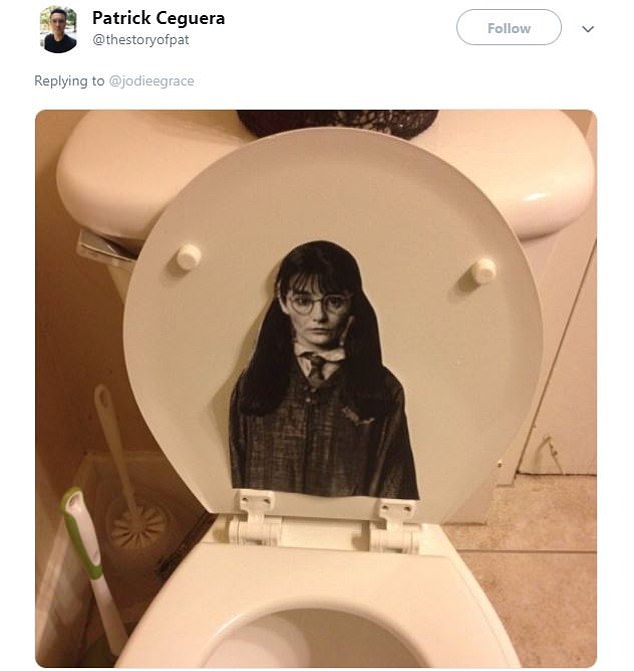 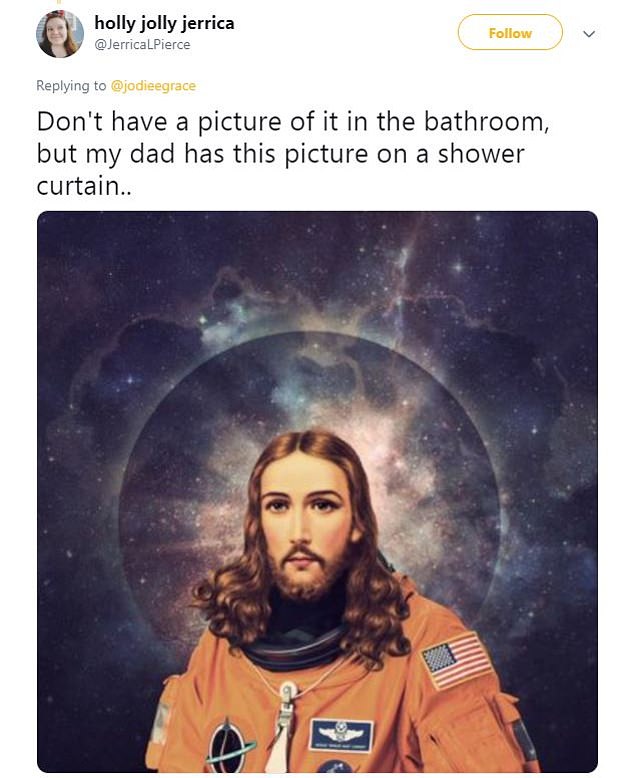 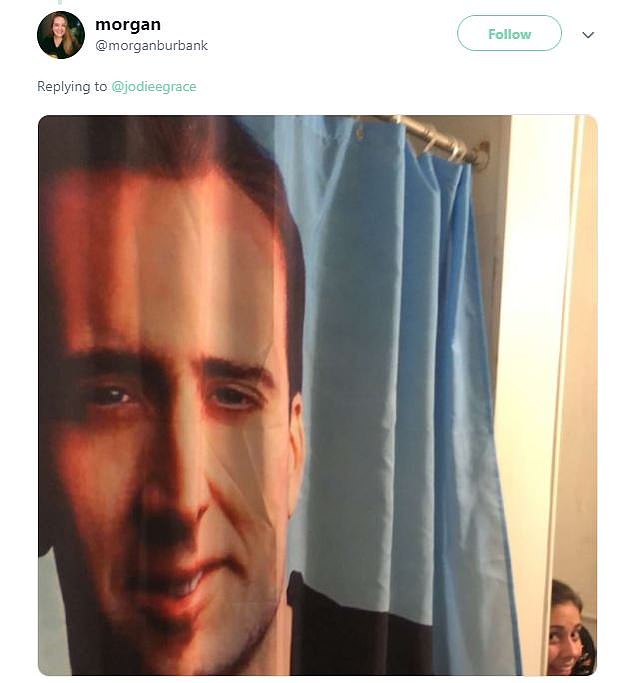 Wall of fame: Wall hangings and quirky paintings were another common theme in the bizarre things found in boy’s toilets thread

One Twitter user shared a photo of the Jonas Brothers that hung on the wall of a boy’s bathroom.

Several others had seen religious photos hung on bathrooms walls, and some had even revealed wacky personalized shower curtains.

And to conclude the thread of crazy things that have been spotted in boy’s bathrooms by different people, some users shared some pretty gross stories about bathrooms in general.

One user said: ‘When I met my husband he had a drawer in his bathroom FULL of toothbrushes that belonged to the previous owners.’

Another added: ‘I asked an ex boyfriend how long he’d had his grody shower curtain. He said “I don’t know, it came with the apartment.” He’d been living there for NINE years.’

‘Not specifically a boy’s bathroom,’ another added, ‘but I’ve found toe nail clippings in a B&B bathroom and a wet wipes box full to the brim with an unidentified liquid in a campsite outhouse.’ 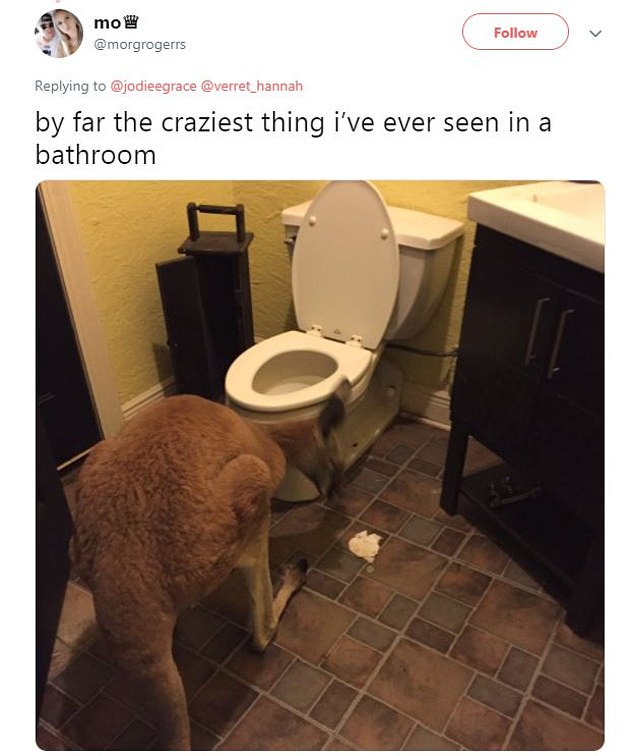 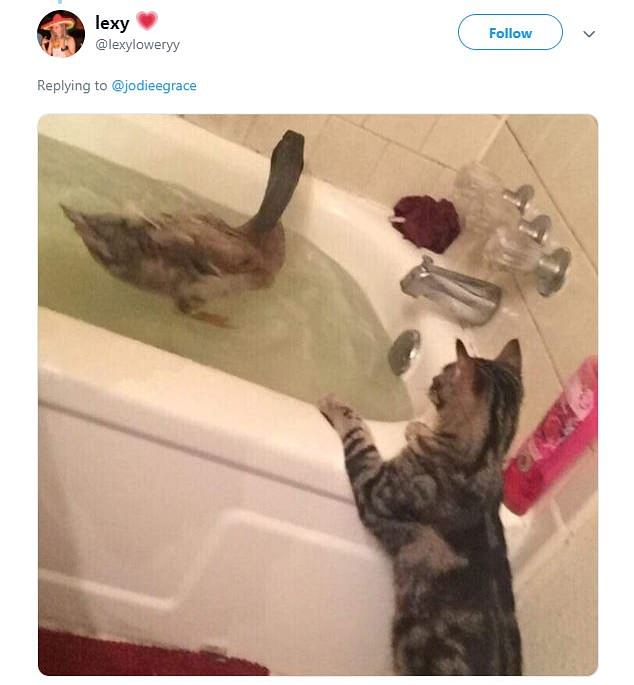 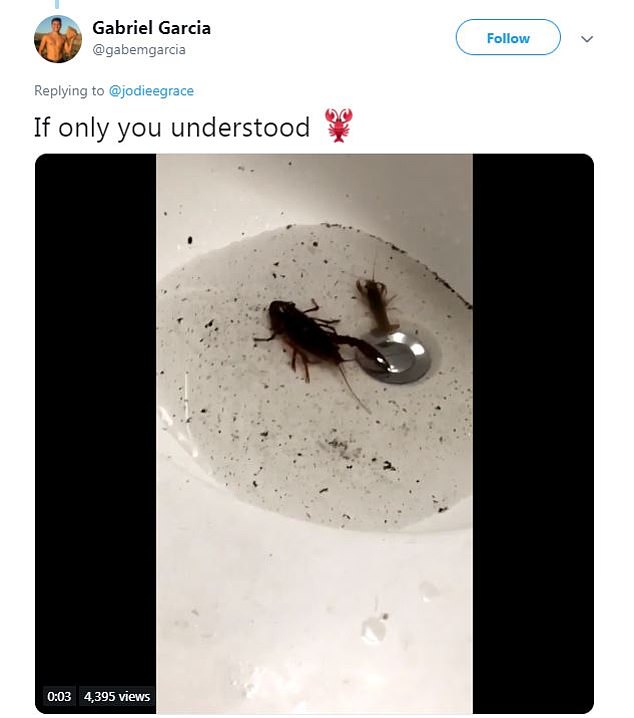 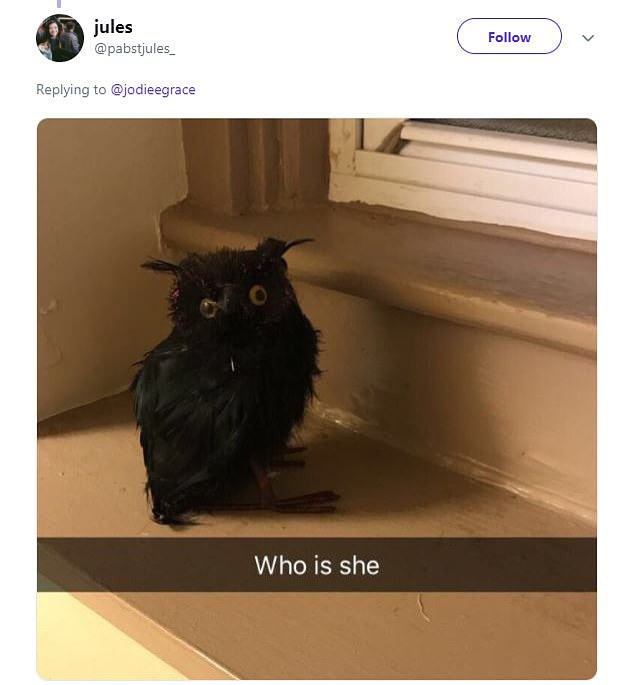 Too far? Some users shared photos of animals and insects they had previously found in bathrooms, including a kangaroo

‘Not found in a boys bathroom, but at my old place the shower used to leak resulting in the floor being wet…we had mushrooms growing. I really wish I still had that picture but it was like five years ago,’ another user added.

Others shared photos of gross bathroom environments, and others shared what are simply the most random of the lot.

The thread, which gathered roughly 14,000 retweets and almost 55,000 likes entertained users for hours.

One Twitter user wrote: ‘I just spent 30 minutes scrolling through this. One of the best threads on twitter I am laughing so hard.’

Another said: ‘This thread is cracking me up hard thank you for this.’

‘Going through this thread makes me wonder what kinda guys you girls are hanging out with,’ joked another user. 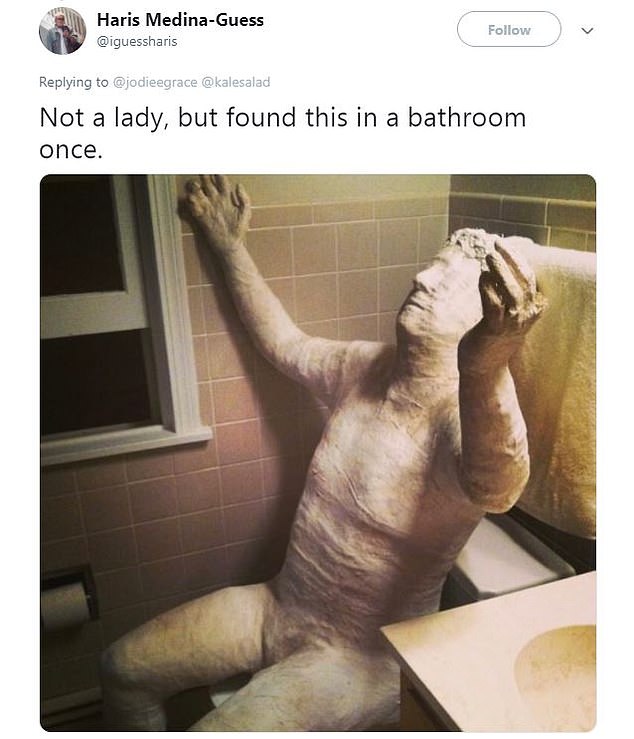 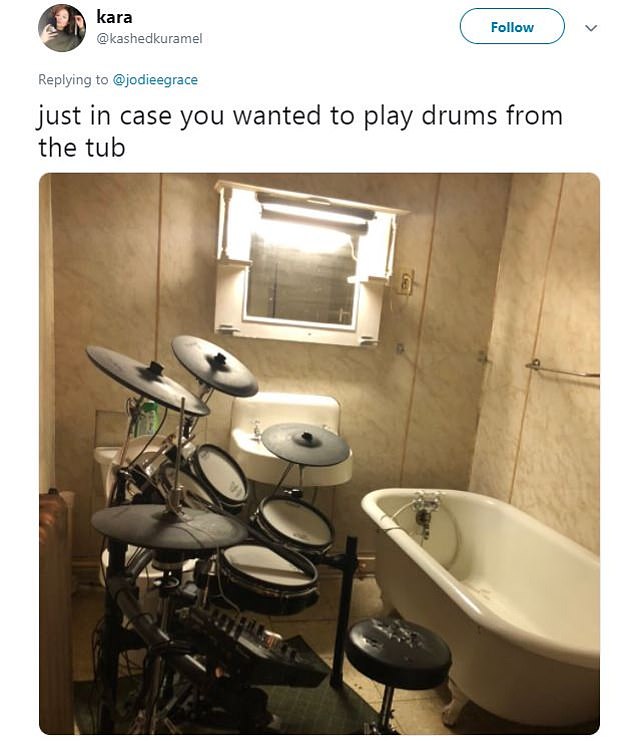 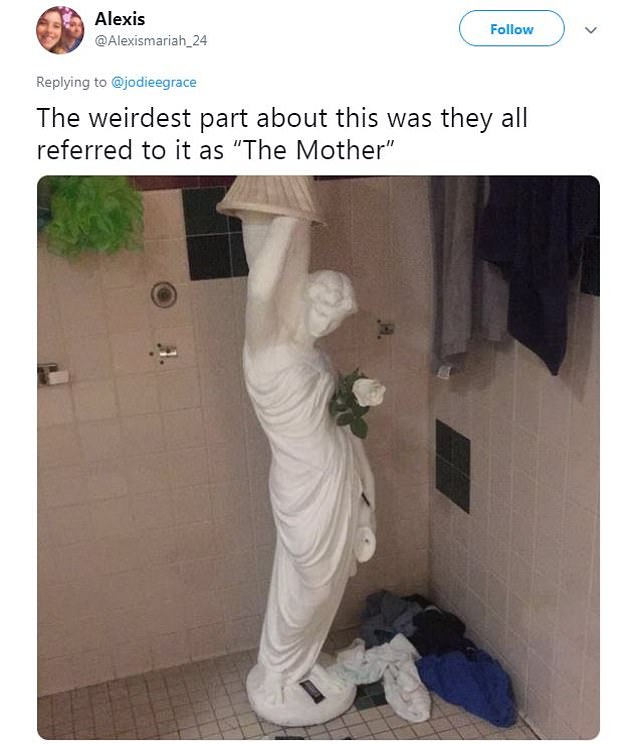 Random! The most wacky finds in men’s bathrooms included a statue of a woman, a drum-kit and what looks like a papier-maché sculpture of a human body