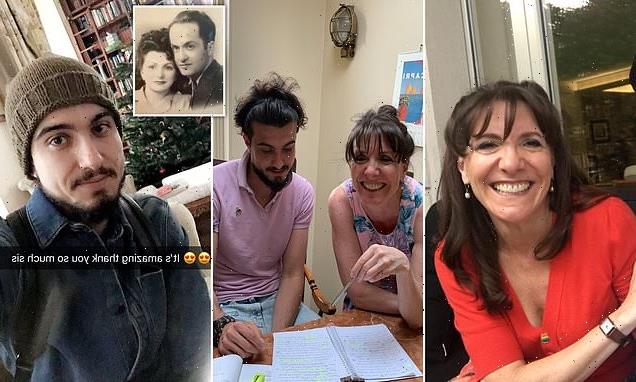 Woman whose grandparents escaped the Holocaust reveals she’s now let 30 refugees stay in her home to ‘give something back’ – including a Syrian man, 27, who came for a month and, four years on, is ‘part of the family’

A woman whose Jewish grandparents fled the Nazis during the Second World War has revealed how she’s offered rooms in her home to around 30 refugees and asylum seekers over the last five years to try and ‘give something back’.

Karina Litvack, who’s half-French and half-Canadian, decided to open her spacious West London home to strangers in need in May 2017 after her three grown-up daughters flew the nest and she had space to spare.

Speaking to FEMAIL, Litvack, 58, said her own family’s tragic history – many of her grandparents’ relatives perished in the Holocaust – spurred her on to welcome refugees in, saying: ‘I wouldn’t be here today if somebody hadn’t done this for my mother and grandparents.’

Her grandfather was just 12 when he left Poland for Canada with his 15-year-old brother. Their sibling was prevented from boarding transport across the Atlantic because he was on crutches, and was killed by Nazis. Her grandfather later met and married Litvack’s grandmother, who’d fled Odessa, now part of the Ukraine, in similar circumstances for Canada. 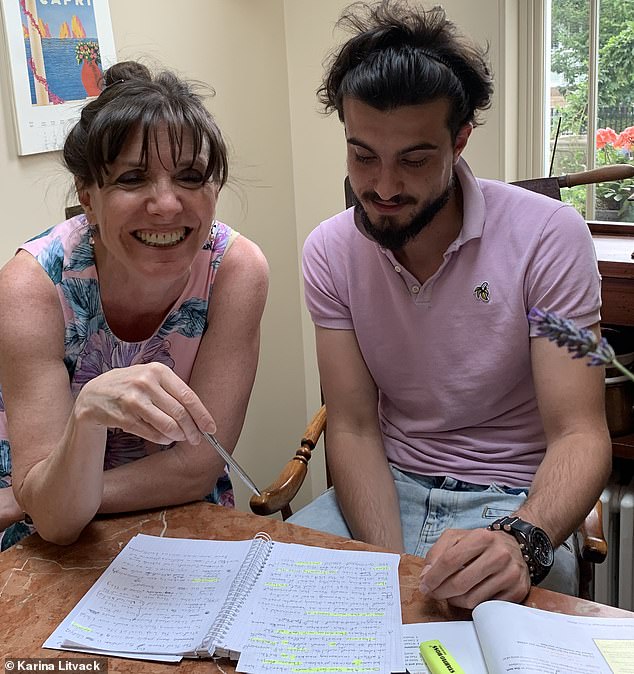 Karina Litvack, who lives in West London, opened her home up in May 2017 to refugees and asylum seekers, after deciding she wanted to try and ‘give something back’. Her own grandparents had been taken in by a stranger during the Second World War (Karina and Basel, the first refugee she housed, at her home in West London) 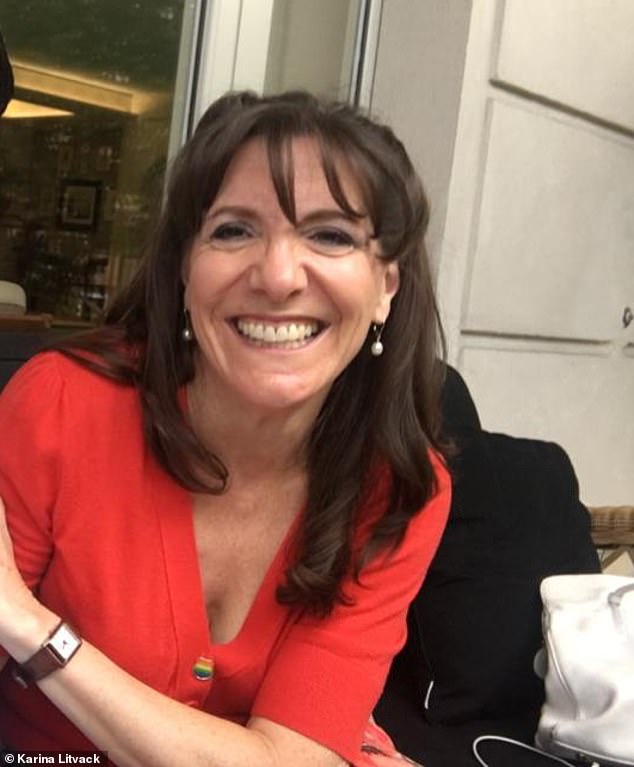 In the last five years, Litvack, who lives in West London, has taken in refugees from across the world including Kenya, Syria and Ethiopia – including several women and a family of five 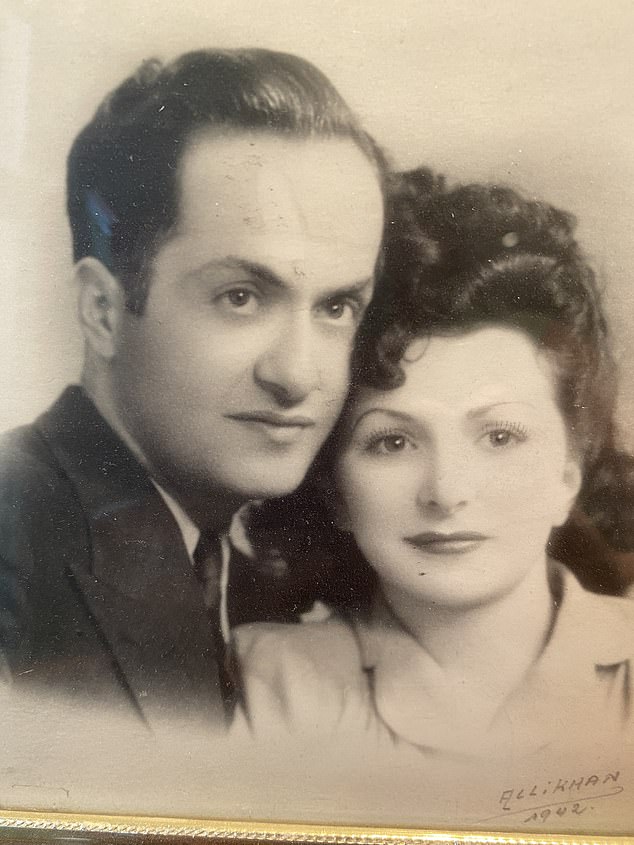 Litvack’s grandparents, who hid in the mountains until the Second World War was over after being secretly housed by a stranger. She says her grandmother, who was either pregnant or had just given birth at the time the photo was taken around 1942 told her years later that while the photo looks glamorous, she was filled with ‘deep anxiety’ about what the future held when it was taken 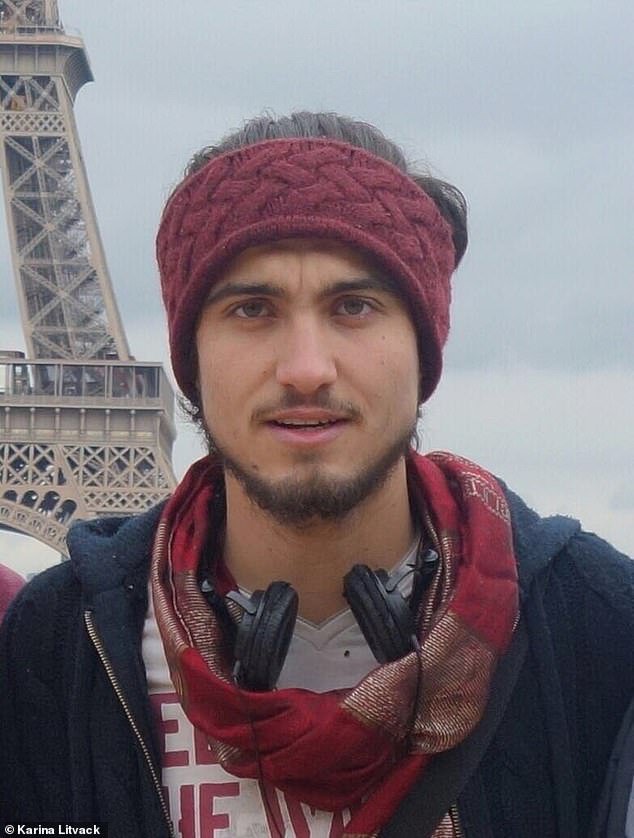 The first migrant she hosted, Basel, a Syrian student, 27, had been imprisoned as a teenager in Aleppo and fled the country on his release at the age of 19.  He’s now half-way through his computer science degree at a London University (Pictured in Paris)

On her maternal side, her grandfather, from Bulgaria, and grandmother, from Vienna, had both fled to France as Nazi control intensified.

While many of her grandmother’s family were arrested and deported to Auschwitz, where they died, the young couple, who were Sephardi Jews, managed to evade capture and were housed by a woman in a mountain cottage until the war was over. Litvack’s mother was just two when peace descended.

She says her grandmother suffered the trauma of losing most of her close family; her sister, who was deported to Auschwitz with her husband, brother and mother, had a 16-month-old son. Records from the Polish death camp show that the baby met his death in the gas chambers.

The first asylum seeker who came through Litvack’s door four years ago was Basel, a then 23-year-old student who had been imprisoned as a teenage in Aleppo.

He grew up in a close-knit provincial town called Membij in the country but had been studying at university in Aleppo when civil war – as Syrians protested against President Bashar al-Assad’s regime – saw violence escalate in the city just over a decade ago. When he was released at 19, he fled the country.

After expecting to stay in Litvack’s home for just a month, he remains, four years on, still living there and has become, she says, ‘part of the family’.

Litvack explains that a strong maternal instinct kicked in as soon as Basel walked through the door and she’s welcomed dozens of other refugees – including several women and a family of five – into her home for ‘months at a time’ since. 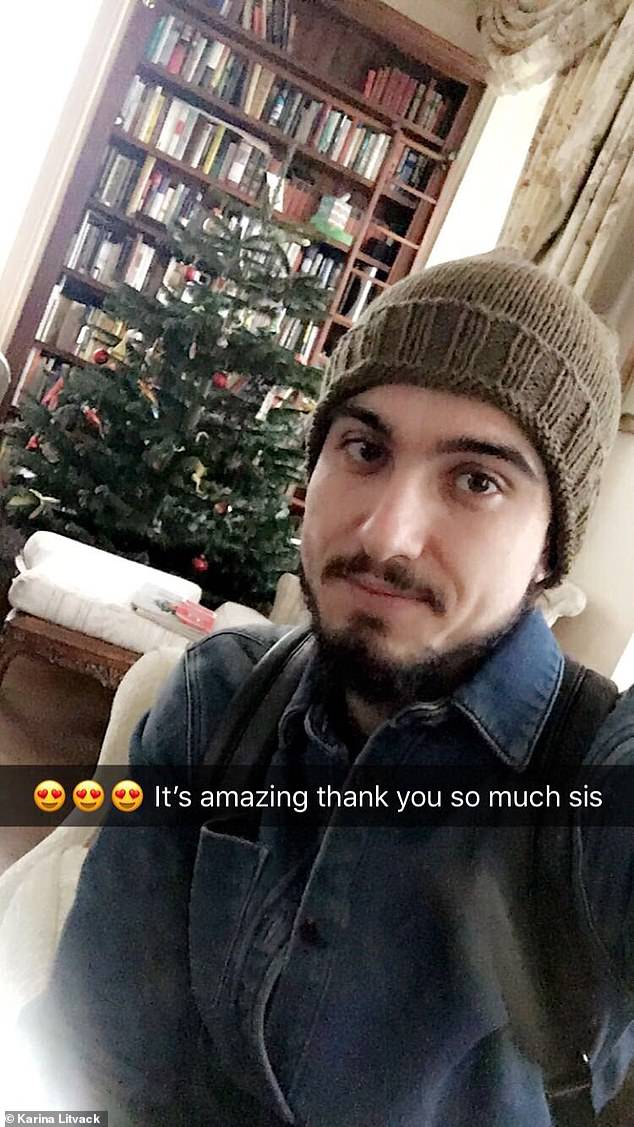 One of the family: a language misunderstanding saw Basel almost leave the Litvacks after just four weeks – but four years on, both are happy with the arrangement. Basel wearing a hat knitted by Gabriela, his host’s daughter 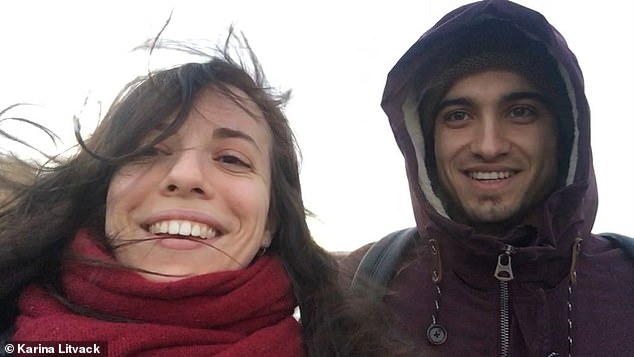 Basel pictured with one of Litvack’s three daughters, Gabriela, all of whom had flown the nest before the refugees began staying 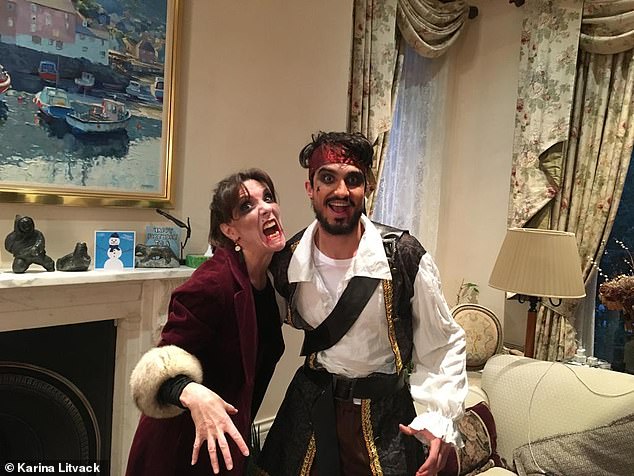 The mother-of-three, who works in sustainable development and is separated, explains: ‘I really, really identify with the mothers [of refugees]. They have to let their children leave and they know that they’re undertaking a really, really dangerous journey.

‘I simply cannot imagine the anguish Basel’s mother felt when he disappeared, then the relief that he was alive, and then the anxiety about the journey and what awaited him.’

Basel says trying to build a life in a huge city like London has been intimidating and difficult at times.

‘Nobody knows each other, so no one really can help you, it’s difficult. I had a dream to work but first you need the basic things like a place to sleep.

‘I was sharing rooms with my cousins but it was only a temporary arrangement. I was lucky to find Karina and and she put me on track to start my life here.’

On the day Basel arrived, Litvak says she asked her daughter, who was fluent in Arabic and living in the US at the time, to speak to him in his native language. 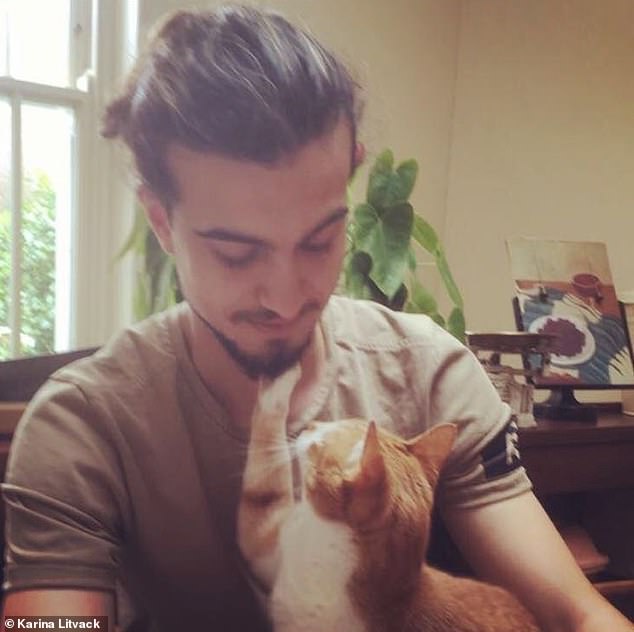 Refugees at Home, a charity which puts asylum seekers and refugees in contact with people in the UK with spare rooms, say they’ve hosted nearly 2,500 people for over 186,000 individual nights since they began in 2016 (Pictured: Basel pictured with a family pet) 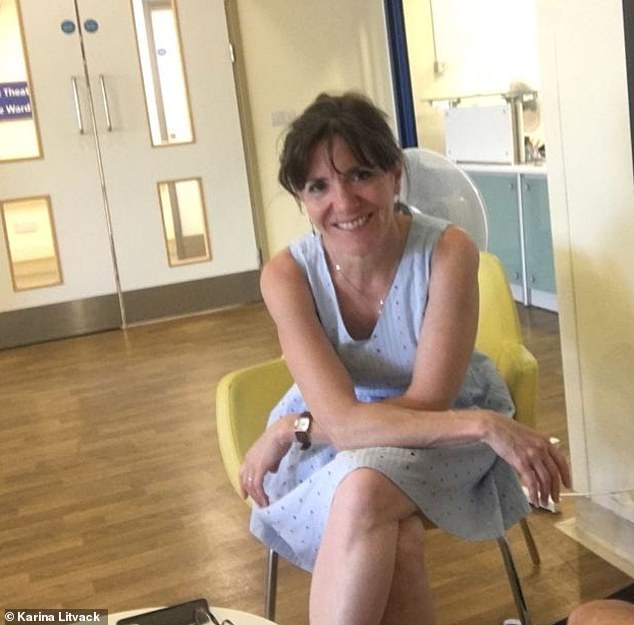 Litvack says she thinks of the parents who’ve had to let their offspring flee against their will, saying: ‘I just thought if I can help one mother’

Describing how they overcame the language barrier, Litvack says she ended up using emojis and hand signals, with Basel saying the English lessons she offered him were ‘boring’ at first.

A misunderstanding early on almost saw him leave his host’s home early, after he misunderstood a conversation about dates and assumed she was referencing a date he must leave by.

Five years on, Basel is in his second year of a computer science degree and says he wants to graduate and ‘work very hard’ as a way of saying thank you to the Government for granting him asylum.

She says educationally it’s been a hard road for him and he had to take secondary school level maths because his Syrian qualifications weren’t recogised. It took three years for him to learn English. 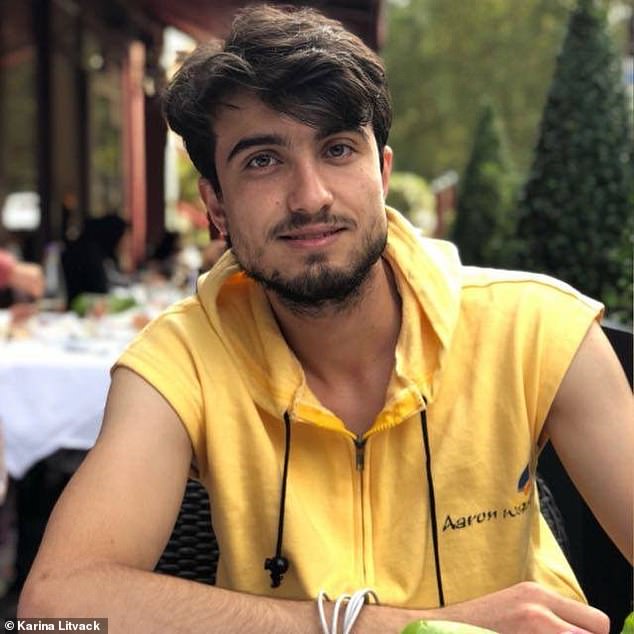 Educationally, it’s been a ‘struggle’  because Basel’s Syrian university qualifications weren’t recogised in the UK and he had to take secondary school exams before he could recommence his degree

Now working with Refugeesathome.org, a charity which puts asylum seekers and refugees in contact with people in the UK with spare rooms, Litvack says what started out as an ‘impulsive decision’ to open up her home is something that’s been hugely rewarding for her.

‘I don’t think I’m going to go to Syria anytime soon or Sudan or Afghanistan or Iran or Kenya –  it’s kind of been a National Geographic in my house and really interesting.’

‘You have to be careful not to ask nosy questions but generally guests been very forthcoming about what’s happening in their country and their family and their own experiences, and why they had to leave. Nobody left in pleasant circumstances, everybody’s had trauma.’

The charity’s co-founder, Sara Nathan, told Femail that everyone is carefully vetted before being placed with a host: ‘Since Refugees at Home started in early 2016, we’ve hosted nearly 2,500 people for over 186,000 individual hosted nights.

‘And it’s been surprisingly uneventful: guests are law-abiding, happy to be hosted and keen to be compliant with a country and a family offering them somewhere to stay.

‘Hosts and guests often build long-lasting friendships and learn huge amounts about each other. It’s real integration in action and is about ordinary people getting on together and living alongside each other, which benefits everyone.’ 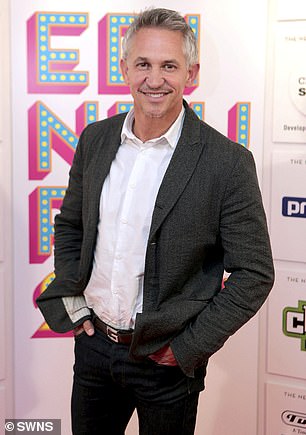 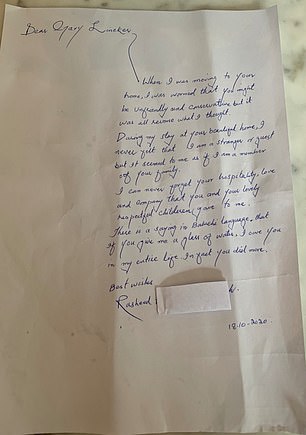 Match of the Day star Gary Lineker hosted a refugee using the same charity, Refugees at Home, in October 2020.  Right: The letter addressed to Lineker signed by the migrant he homed, known as Rasheed

The charity helped BBC Match of the Day host Gary Lineker host a refugee at his Surrey home in October last year.

The former England and Leicester footballer, 60, announced he was taking in a migrant after he was criticised for virtue signalling when he had publicised their plight.

He revealed the refugee, known only as Rasheed, had stayed in his home with sons George, Harry, Tobias and Angus, saying at the time: ‘It’s been fascinating and a real education for my boys as well.

The former England striker later posted a letter on his Instagram account from Rasheed thanking him for the stay.