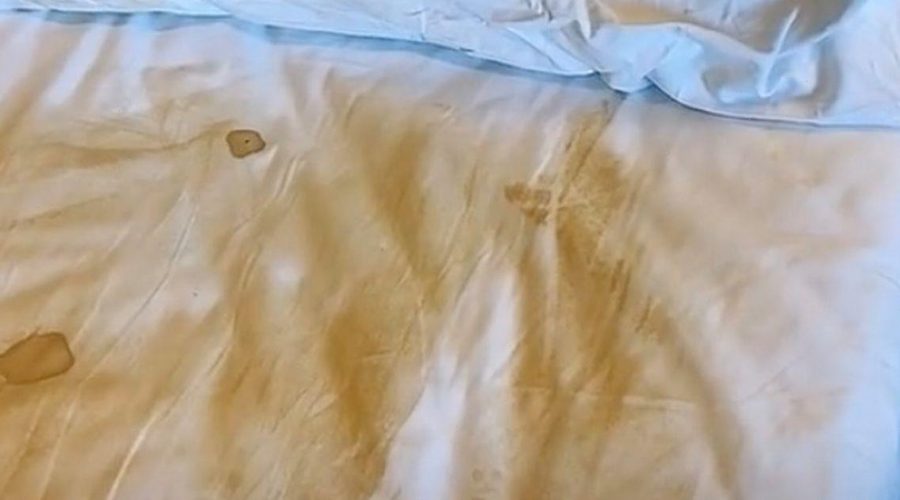 A woman was left red-faced when she discovered her fake tan had left her hotel room looking like a crime scene.

Gemma Ramlal applied the fake tan all over her body before she went to sleep but she was horrified at what she found on the bed the next day.

Posting the embarrassing blunder on TikTok, she reveals that the tanning cream has stained the crisp white bed sheet and duvet cover.

The brownish-red mark can also be found on her pillow case.

She asks viewers for help, saying: "When you fake-tan at a hotel and it looks like a crime scene…what do I do?"

Gemma later wrote in the comments: "Update: I confessed to housekeeping and they were lovely about it. Can have my bronzed days guilt free now.

"I explained to them it wasn't 'anything sinister'. They were lovely and glad i was just able to say something."

Her video has raked in 76,000 views and people suggested Gemma pay for the beddings.

"Go to the reception, apologise and offer compensation," one wrote.

A hotel worker said she has seen other problems "way worse" than the fake tan blunder, adding: "Don't worry about it, just let a staff member know it is fake tan and not blood."

Another said: "Obviously if it's something gross please strip the bed so we don't have to touch it."

It came after a hotel guest spotted "creepy" light shining out of the bathtub drain during her holiday stay.

Some viewers joked it could be a "portal to hell" and made references to horror movie "It", saying: "If someone down there asks if you’d like a balloon, just say no."

But one assured the woman and explained: "Most hotels have a chase between the rooms where all the mechanical systems are exposed so they can be maintained.

“If the trap in the tub is plastic and the maintenance person left the light in the chase on, it will be visible in your room. That's probably what's happening here."