Businesses will get cash grants to encourage them to create new jobs and fill them with younger workers through a "JobMaker Hiring Credit" scheme. Businesses that hire people who have been on JobSeeker, Youth Allowance or the Parenting Payment for at least one of the previous three months will get $200 a week for 12 months if their new staff member is 16-29 years old and $100 if they are between 30 and 35.

The government will also spend $1.2 billion to subsidise up to 50 per cent of an apprentice's wages for eligible businesses up to a cap of $7000 a quarter until September 30 next year. There are 100,000 places in the scheme. 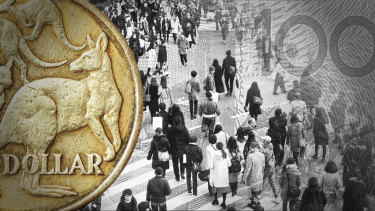 Who fares best from the budget?Credit:

The government's decision to bring forward planned tax cuts worth about $12.5 billion over the next 12 months represents a big win for a forecast 11.5 million taxpayers. The 19 per cent tax bracket threshold will rise from $37,000 to $45,000 under the government's plan, while the 32.5 per cent bracket will go from $90,000 to $120,000. The one-off low and middle income tax offset will stay in place for another year. When combined the measures will deliver individuals up to $2745.

Australian businesses are also in line for big tax cuts if they buy new assets. Any company with turnover up to $5 billion a year will be allowed to write off the full cost of any depreciable asset they buy before June 30, 2020. At the same time, an estimated one million companies that record a loss up to the 2021-22 financial year will be able to offset it against their previous profits made after 2018-19 to generate a refund from the tax office. Combined, the measures are estimated to give business more than $30 billion over the forward estimates.

Manufacturers in priority areas including defence, space, food, recycling and medical products, will get $1.3 billion to help with research and expansion plans, with another $200 million in other initiatives for the sector. Most of the funding will be doled out over four years.

"Shovel ready" infrastructure projects will get $3 billion, with two-thirds to go towards small scale road safety projects and the remainder for the government's Local Roads and Community Infrastructure program.

The national housing corporation will also be allowed to issue another $1 billion in bonds to encourage more investment in affordable housing construction.

People waiting for a home care package are winners, with 23,000 more packages in the budget at a cost of $1.6 billion – although only 2000 of the new packages are at level four, the highest level of care, which is needed to keep people out of residential aged care.

The number of Medicare-subsidised psychology sessions that patients can access in a year has been doubled to 20 for all Australians, extending the measure that was created to support Melburnians hit by COVID-19 isolation and economic impacts earlier this year.

Women over 45 were the most likely to be on JobSeeker before the advent of COVID-19 and the budget does not offer them the same support to get back to work as younger workers whose employers are eligible for JobMaker credits.

Rules would get tighter on superannuation funds, which face the threat of having to issue a mea culpa and being banned from taking on new members if they repeatedly fail an annual performance test proposed by the government. The trustees that oversee funds would also have to comply with a tighter requirement to act only in their members' best financial interests, which could make it harder for super funds to raise broader social concerns.

Get our Morning & Evening Edition newsletters

The most important news, analysis and insights delivered to your inbox at the start and end of each day. Sign up to The Sydney Morning Herald’s newsletter here, to The Age’s newsletter here and Brisbane Times‘ here.

10/06/2020 lifestyle Comments Off on Winners and losers in the federal budget
Recent Posts
We and our partners use cookies on this site to improve our service, perform analytics, personalize advertising, measure advertising performance, and remember website preferences.Ok