Two suburban commuter car parks promised at the 2019 federal election may not be delivered until 2024 after a local council raised concerns the “tainted” money was offered for projects that were never their priority.

In a decision that raises further questions about the $660 million Commuter Car Park fund, the Glen Eira council in south-east Melbourne will start a new round of public consultations around proposed car parks at the Bentleigh and Elsternwick railway stations. 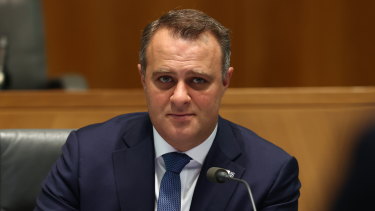 A council in the seat of Liberal MP Tim Wilson has delayed possible construction of two railway station car parks until at least 2024.Credit:Dominic Lorrimer

Both stations, which sit in the electorate of Liberal MP Tim Wilson, were pledged $9 million each to build more than 500 car park spaces in the run-up to the federal campaign.

A scathing Auditor-General’s report into the scheme revealed the fund was overwhelmingly allocated to Coalition-held or targeted seats in the lead-up to the federal poll. It has also revealed a spreadsheet entitled “top marginal electorates” was used to identify possible seats for car parks.

Since the promises were made, three of the planned 47 car parks have been built. Six projects have been cancelled, one was found to be ineligible while four are under construction.

After the audit report was released, the Glen Eira council was so worried it commissioned an independent probity report into the commuter car park funding.

Councillors decided on Tuesday night to start anew with consultation to provide clarity on the source of funding and test the community’s appetite for accepting the $20 million on offer. That consultation is expected to push back final construction until early 2024.

Councillor Jim Magee said the council didn’t ask for the money nor did it have to compete for it “like we always have to do to get government funding” with detailed submissions and heavy lobbying.

“As we all know, that’s all a little bit sour and we need to be comfortable with that.”

The federal government initially offered Glen Eira the money on the condition it match the funding. After the pandemic hit and the council shelved its initial plans it successfully lobbied for the Commonwealth to cover the entire cost.

Since then, it has chosen two new sites after the community complained those first identified were too far from train stations and the planned multi-storey car parks were too large.

Councillors acknowledged the proposed new site in Bentleigh was probably a better outcome. However, councillor Tony Athanasopoulos cast some doubts over the future of the Elsternwick plans, saying it was a “complete move away” from the land use previously outlined.

Councillor David Zyngier said he would rather outright refuse the money but consulting the community was a sensible move.

“I don’t believe in taking money that’s tainted,” he said.

But mayor Margaret Esakoff said any reference to tainted or corrupt money was “purely wrong” given the probity report had cleared the council to accept the money.

The Baron Consulting report recommended the council establish a “probity firewall” to insulate itself from the federal department’s “sub-optimal administration of the grant process”.

Councillor Anne-Marie Cade went further, saying the council’s role was to get the best outcome for the community and “to give $20 million back and not use it would be reprehensible”.

“It would be naive to think that money is ever given by whichever political party if not with the intention of garnering more support or votes at an election. That is why money is given and promised just before elections,” she said.

Mr Wilson said the council was on record as noting the car parks were “priority projects” and urged it to get on with construction.

“Commuters across Glen Eira and Bayside are begging for more cark parking, it’s disappointing Glen Eira is putting petty council politics ahead of resident outcomes by turning down Commonwealth funding for ‘priority projects’ they submitted proposals for,” he said.

Treasurer Josh Frydenberg, who promised up to 2000 car spaces at four railway stations in his own electorate of Kooyong, confirmed none of those had been built yet.

Pressed by Labor on the entire program, he revealed only a “majority” would be in place or under construction within the next 18 months.

The role of staff in Prime Minister Scott Morrison and then-urban infrastructure minister Alan Tudge’s offices in choosing the car park projects to fund will come under scrutiny in a new Parliamentary inquiry.

It is expected to examine who started and added to the list of marginal electorates the Auditor-General’s office says was used to decide the allocation of money. Mr Tudge says he wasn’t aware of the list.

The current minister, Paul Fletcher, has claimed the spreadsheet is a cabinet document and can’t be released for 20 years.

But junior minister Jane Hume said on Wednesday she wasn’t sure it existed.