Raise your hand if you spent Mother’s Day weekend cackling over Netflix’s Wine Country with your mom. The women of Saturday Night Live past reunited in the new comedy to play a middle-aged friend group vacationing in Napa to celebrate a pal’s milestone birthday. In addition to starring in the movie, Amy Poehler directed Wine Country, even telling the public that it was loosely based on the women’s real-life group trips. Given that tidbit, will there be a Wine Country sequel?

Neither Netflix nor the cast has mentioned the possibility of a sequel yet, but as the inspiration for Wine Country came from the tight-knit group’s actual experiences, maybe these women have even more vacation anecdotes worthy of the big screen. In the movie, Poehler and her former SNL costars Rachel Dratch, Maya Rudolph, and Ana Gasteyer join former SNL writers Paula Pell and Emily Spivey as longtime friends who first met working as waitresses in a Chicago pizzeria. Poehler’s frequent onscreen partner and fellow SNL alum Tina Fey appears as a Napa Valley landlord. Former SNL writer Liz Cackowski also co-wrote the script with Spivey, making Wine Country something Lorne Michaels should definitely be proud of.

Ahead of Rebecca’s (Dratch) 50th birthday, Abby (Poehler) plans an epic weekend trip to Napa Valley, California, and goes overboard with scheduling to compensate for recently losing her job. Once the group reaches Napa, the audience sees that all of the women are facing life changes that simmer under the surface before the powerful effect of being with their closest girlfriends again drags out their truths. The whirlwind weekend culminates with the group’s bond solidified once again, and it doesn’t quite leave any questions unanswered for a poential sequel to address.

This story may be complete, but Poehler and her costars have spoken extensively about the moments that inspired the movie, possibly meaning that unused details could generate a sequel. On Late Night with Seth Meyers, Poehler revealed that she and her friends actually traveled to Napa for Dratch’s birthday. That particular adventure kicked off with Poehler believing she accidentally flushed her phone down an airplane toilet (don’t worry, the phone was in her bag all along).

Rebecca pulling her back in Wine Country was also inspired by Dratch (aka Debbie Downer) doing the same during a SNL read-through, so the movie’s material wasn’t exclusively from vacations. Maybe the cast can team together for a movie about their SNL days next. 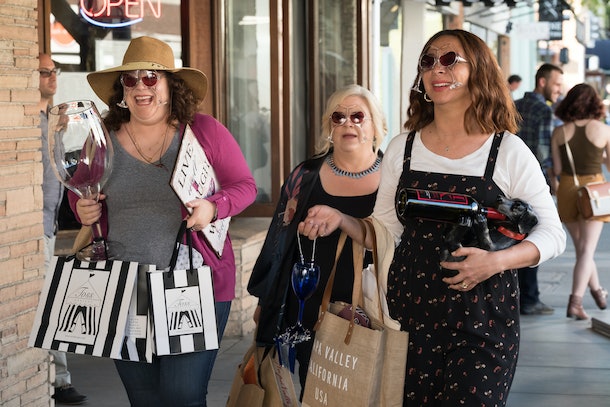 The women could always bounce around sequel ideas in the group text they have, but for now, first-time director Poehler is just proud of what she’s made. She told Glamour:

Fingers crossed that Netflix sends this group on another girls’ trip soon. Wine Country is currently streaming on Netflix.

05/13/2019 lifestyle Comments Off on Will There Be A ‘Wine Country’ Sequel? The New Netflix Comedy Has Fans Begging For More
Recent Posts
We and our partners use cookies on this site to improve our service, perform analytics, personalize advertising, measure advertising performance, and remember website preferences.Ok