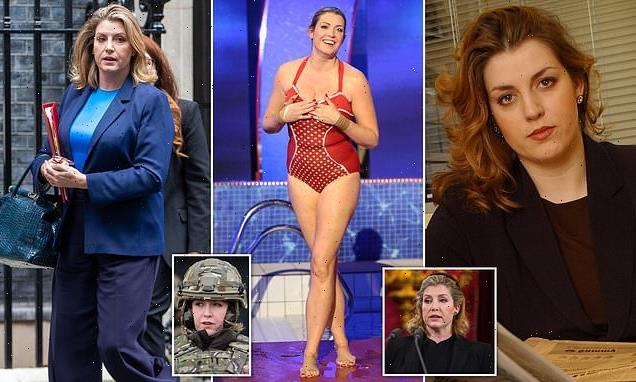 Making waves! From daring dives on Splash! and winning the title of ‘Britain’s sexiest MP’ to her ‘woke’ trans views, how Penny Mordaunt has become one of the favourites to take over for Liz Truss

From working as a magician’s assistant to pay for her college education to training with Tom Daley for the diving reality TV show Splash!, MP Penny Mordaunt has had quite the variety of jobs in her time.

But now it seems the 49-year-old MP for Portsmouth North, who was once voted ‘Britain’s sexiest MP’, is looking for her next role at the top.

The business minister is shaping up to be one of the favourites to take over from Liz Truss when the PM leaves Downing Street next week – having started her political career as one of ‘Cameron’s Cuties’, intended to make the Tory party more appealing to younger voters.

A Brexiteer who initially backed the outgoing PM, Mordaunt is best known for appearing on a reality show called Splash! in her swimsuit in 2014, alongside B-list celebrities such as Gemma Collins from The Only Way Is Essex.

However in recent years, she has attracted scores of admirers and made waves in 2019 as the UK’s first female defence secretary – with her ambition showing earlier this year when she became the first MP to attack Boris over the Sue Gray report.

During the Tory leadership race over the summer, the Portsmouth North MP faced criticism for her ‘woke’ views.

However, Penny also played a central role in parliament following the Queen’s death last month and led King Charles’ Accession ceremony at St James’s Palace in her role as Lord President of the Council. 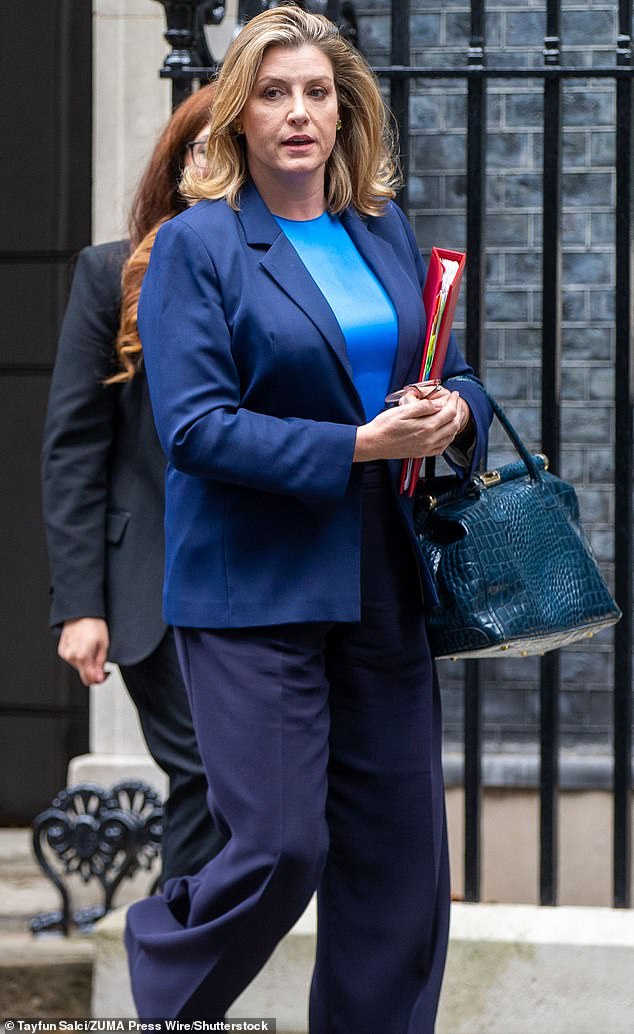 Penny Mordaunt is shaping up to be one of the favourites to take over from Liz Truss when the outgoing PM leaves Downing Street next week. Pictured outside Number on October 13, 2022

From working as a magician’s assistant to pay for her college education to training with Tom Daley for the diving reality TV show Splash! (pictured), MP Penny Mordaunt, 49, has had quite the variety of jobs in her time 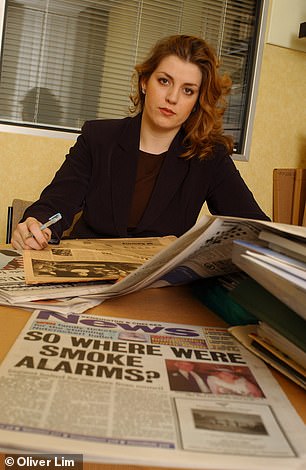 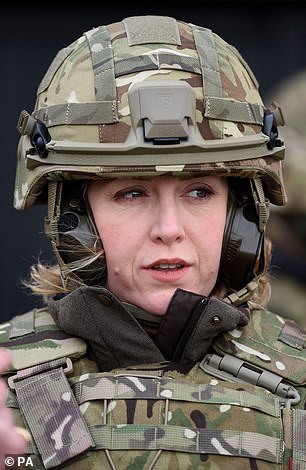 From working as director of communications for Kensington and Chelsea Borough Council (left) to becoming Armed Forces Minister (right), Penny has a host of admirable achievements

She previously compared her career in politics to diving, telling the Daily Mail: ‘You have to be brave in politics. To get stuff done, you have to put your head on the block. Just like diving. There are risks to anything you do. It’s all about managing it, and keeping it dignified.’

Despite Penny’s polished looks and admirable achievements, she had a tough upbringing.

Born in Torquay as one of twins, she moved with her family to Portsmouth at the age of two.

Named after a battleship — HMS Penelope — she grew up in Portsmouth, where her father was a paratrooper before turning to teaching. 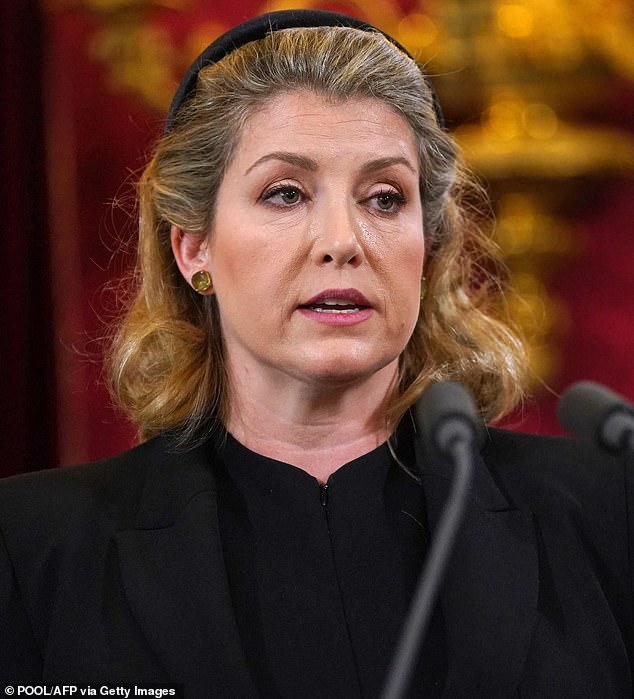 In her role as  Lord President of the Council leading King Charles’ Accession ceremony at St James’s Palace on September 10, 2022 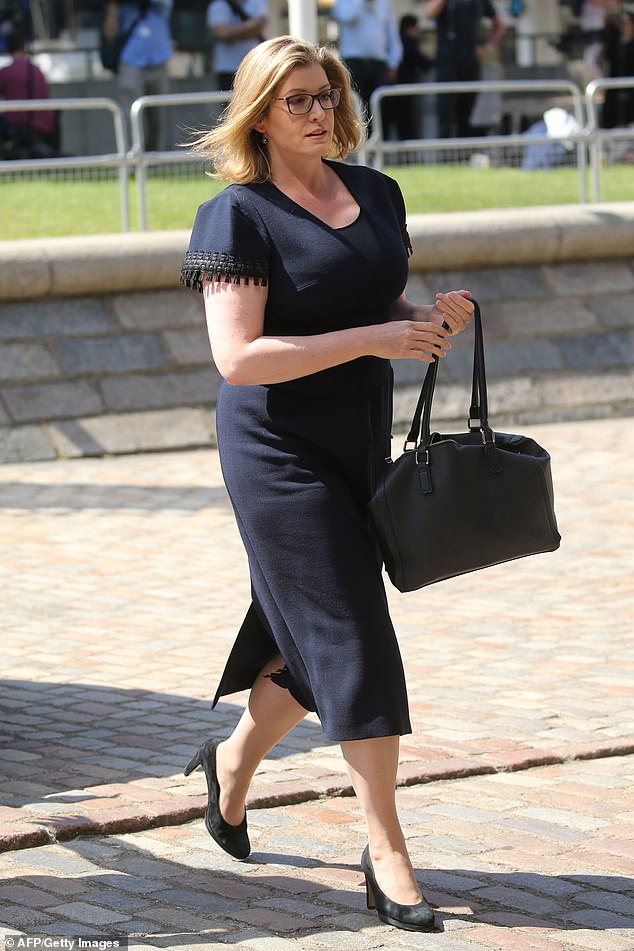 In recent years, she has attracted scores of admirers – and her ambition showed earlier this year when she became the first MP to attack Boris over the Sue Gray report

Her mother died of breast cancer when she was 15 – the same year her father was also diagnosed with cancer – turning her into a ‘child carer’.

She told DailyMail in 2014: ‘All the women on my mother’s side of family have died of breast cancer.’

Shortly after their mother passed away, her twin brother dropped out of school, and went to work in a factory.

Their dad worked all hours to pay the bills, battling his own cancer. Penny’s younger brother was just nine at the time, and she became the family carer.

She explained: ‘We didn’t get any help. It was very, very challenging and pretty tough trying to do everything.’

She paid her way through sixth-form college by working as an assistant to a Portsmouth magician called Will Ayling, who was once president of The Magic Circle. 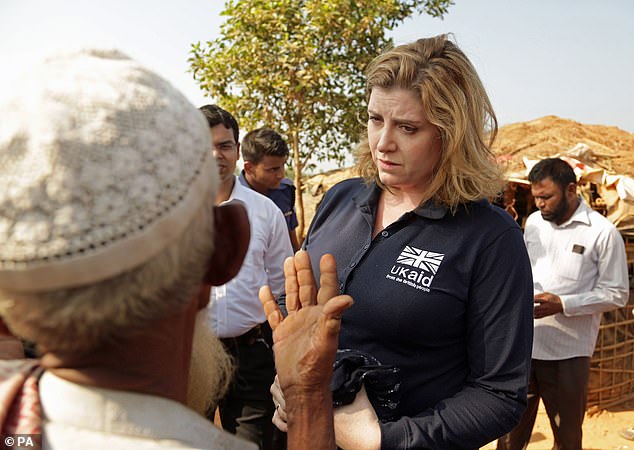 Penny, who has been an MP since 2010, has held a number of roles over the past decade, including International Development Secretary (pictured in 2017 in Bangladesh)

They performed in hotels, Army barracks and golf clubs, with Penny ‘sawn in half and chopped to bits.’

Her boss’s signature trick was called ‘Zigzag’, where he pushed large steel blades through various ‘body parts’, giving the illusion that the assistant’s stomach was taken out.

Penny said: ‘I cut my leg a few times and got the odd nick under my chest, but no ambulances were required. It was fun and it relieved the pressures at home a bit.’

By the time she passed her A-levels and ‘got the house back to normal’, her father had met a new partner and Penny was able to ‘start to really focus’ on her life. 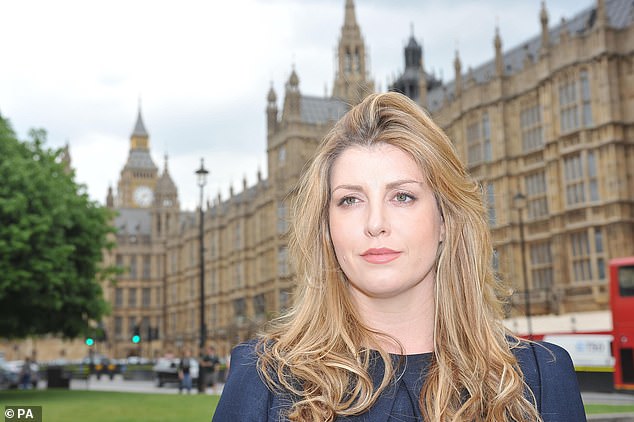 After studying Philosophy at Reading University, Penny won her Portsmouth seat in the 2010 election (pictured, in 2010)

With typical endeavour, she then had a ‘life-changing’ year working in Romanian orphanages.

Then she studied philosophy at Reading University, where she embraced politics and was president of the Students’ Union.

It was then she helped to secure the acquittal of one of her university lecturers after he was falsely accused of indecently assaulting two students.

John Cottingham, now the emeritus Professor of Philosophy at Reading University, had been accused of trying to seduce the pair by discussing bondage and the work of the Marquis de Sade during a garden party. 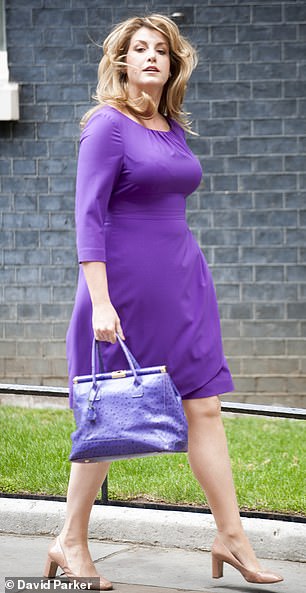 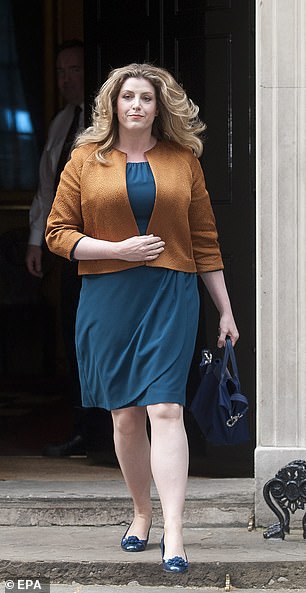 The 49-year-old, who was previously described as one of David Cameron’s ‘Cameron Cuties’, has said she feels ‘standing out’ is a positive thing in parliament

He walked free from court after a 1997 trial in which Ms Mordaunt, then 24, said she had ‘no hesitation’ in coming forward to support Professor Cottingham.

She said she had attended a conference at Oxford on her own at which the professor was also present – without incident – and had ‘never felt threatened’ in his presence.

She was director of communications for the National Lottery and head of campaigns for Diabetes UK. 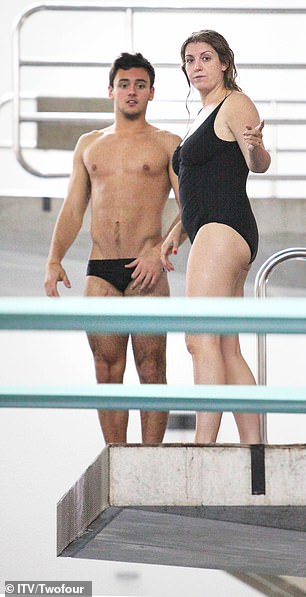 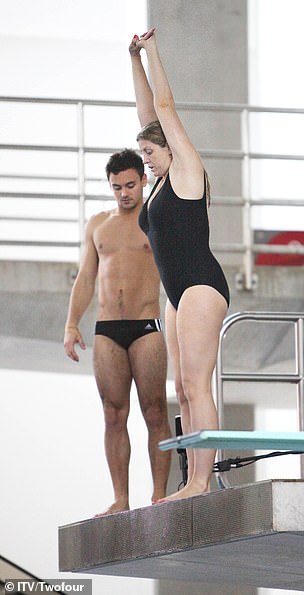 In 2014, she took part in the TV reality show Splash! where she was trained by Tom Daley for a diving competition  against  celebrities like Gemma Collins

She then became head of foreign Press for George W. Bush’s 2000 and 2004 presidential election campaigns; and chief of staff for fellow Tory David Willetts.

She has also been ‘head of youth’ under John Major (‘he’s lovely’), and William Hague’s head of broadcasting – and she is a sub-lieutenant in the Royal Naval Reserve.

Despite her own political allegiances, her family’s ties were all to the Labour party. Indeed, she’s related to Philip Snowden, the first Labour chancellor, and George Lansbury, who ran the party in the 1930s and whose granddaughter is the actress Angela Lansbury.

Penny said she went to ‘check out’ Labour at an education conference in Skegness in the late-Nineties but was not impressed, and returned home a Tory. 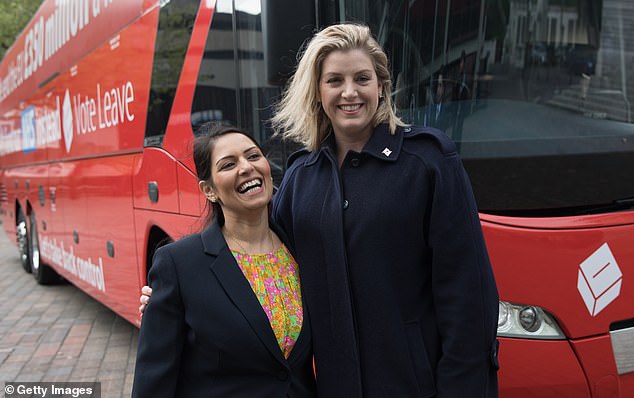 She explained: ‘The people I met were very nice people. But no, I wanted to get things done.’

She joined the Royal Navy Reserve before standing as the Tory candidate for Portsmouth North in the 2005 General Election. She narrowly lost to Labour.

At the time, she received a letter from Margaret Thatcher which told her to ‘get back on the horse’, which is still sitting on her mantlepiece.

Penny did exactly that, and in 2010 won with an 8.6 per cent swing. Lady Thatcher wrote again — this time to say congratulations. 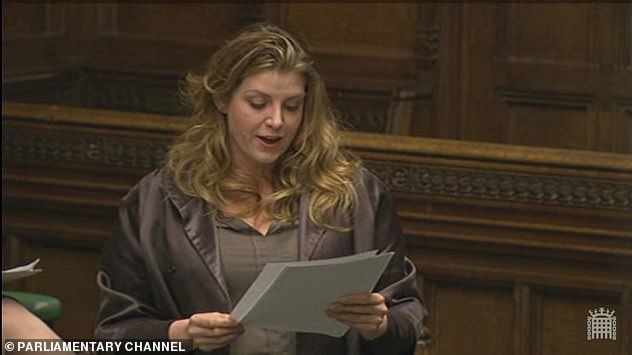 As an MP, she campaigns on many issues, from anti-loneliness to assisted dying and better IVF funding (pictured in the House of Commons)

She posed for Vanity Fair magazine after winning her seat, and has no problem using her looks to her advantage.

Indeed, she was previously described as one of ‘Cameron’s Cuties’ — the women fast-tracked into Tory seats in a bid to modernise the party’s image and lure younger voters.

Penny previously said: ‘Standing out is helpful. Women can wear all sorts of clothes, while most men are just in suits.

‘In the Commons, you have to take what opportunities you can to be called for a question. It’s good to dress to stand out.’ 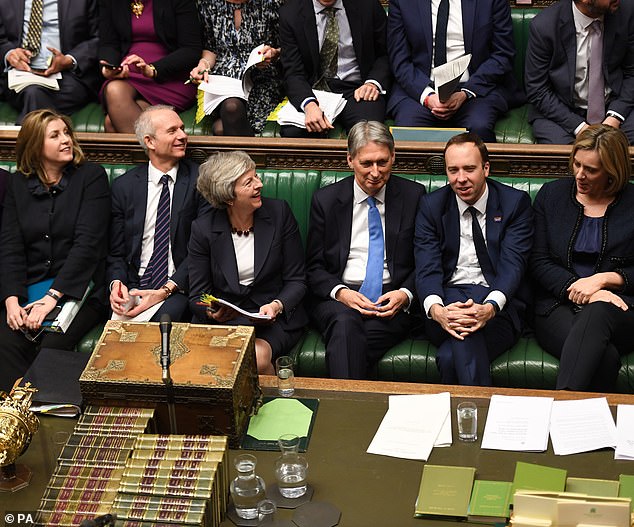 However as an MP, she campaigns on many issues, from anti-loneliness to assisted dying and better IVF funding.

She attracted scores of admirers – and raised her political profile – from her 2014 appearance on Splash!, in which celebrities are trained to dive by Olympic medallist Tom Daley.

She became a junior communities minister in 2014 and was then appointed the first female defence minister for the armed forces in UK history in 2015, and backed Andrea Leadsom in her unsuccessful bid to succeed Mr Cameron in 2016.

She was appointed minister for disabled people when Theresa May took power in 2016.

But she was fired by Boris Johnson shortly after he became Prime Minister, following her endorsement of his rival Jeremy Hunt during in the 2019 leadership contest. 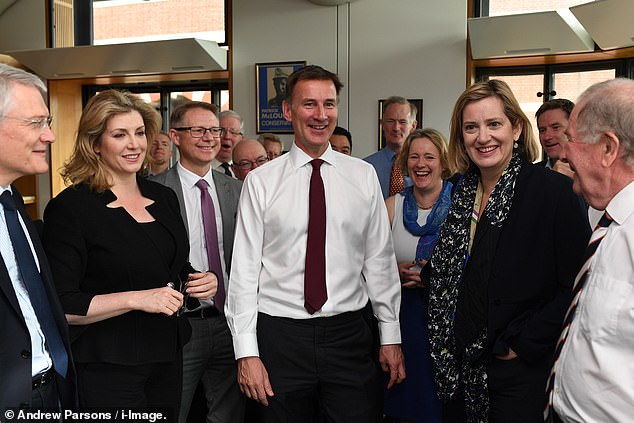 While Penny backed Jeremy Hunt in the 2019 leadership contest, it is believed she will now throw her hat into the ring 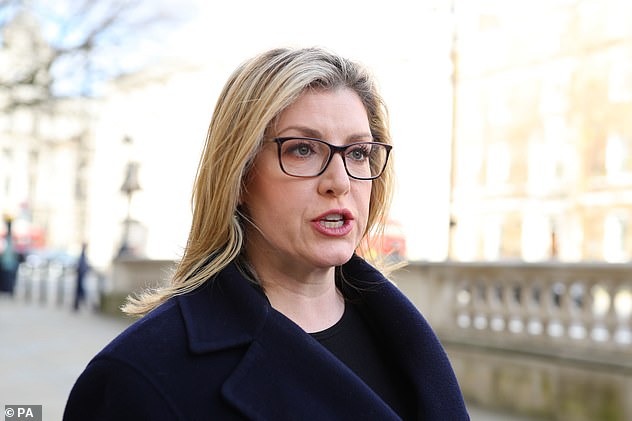 She is divorced after a year-long marriage to Paul Murray ended in 2000 and split from her long-term partner Ian Lyon in 2016. They reportedly had eight cats, but no children

But her ambition was on show in the summer when she became the first minister to attack Boris over the Sue Gray report.

She said: ‘Rule-breaking and abuse of security staff exposed by a report into the Partygate scandal is shameful.’

She is divorced after a year-long marriage to Paul Murray ended in 2000 and split from her long-term partner Ian Lyon in 2016. They reportedly had eight cats, but no children.

The Royal Navy Reservist narrowly missed out on a place in the head-to-head phase in which she backed Miss Truss over Rishi Sunak.

Yesterday Miss Mordaunt said she planned to ‘keep calm and carry on’ and encouraged others to do the same in the wake of the PM’s resignation.

Responding to criticism from Labour, she said: ‘Market functioning has improved, borrowing costs have been lowered and the pound is strengthening… Despite the very volatile global economic conditions, the economy remains resilient.’

But today, Tory MPs warned colleagues against backing Penny Mordaunt to be Prime Minister due to her lack of experience and stance on trans rights.

MPs cautioned that Miss Mordaunt’s views on trans rights are a ‘massive impediment’ to her ambitions.

Se then came under fire for an apparent change of stance after declaring that trans women – who she had previously said were women – were not.

Last night a former Cabinet minister warned: ‘Penny Mordaunt’s views on transgender people are a massive impediment to her ambitions to be Prime Minister. If she were to win the contest, female voters would stay away in droves.’

Another senior Tory said: ‘There’s lots of talk that wherever she goes she leaves a chaotic mess behind her. But I’m also not sure what her views are. I don’t know of any original idea that has ever come to her in the course of her life.

‘I don’t know what makes her tick, and there are definite issues about her trans position that will put a lot of people off.’

A source close to Miss Mordaunt said: ‘Penny has always been consistent in her views. She has never supported self I-D.

‘She supports safe spaces for women and protection for women in sport. These accusations would come as a surprise to the people of Portsmouth, who have repeatedly elected Penny since 2010.’

On her Government experience, they added: ‘Penny has the ministerial experience to run the country at this time having had nine jobs in eight departments, including three Cabinet roles since 2014: Defence Secretary, Development Secretary and Leader of the House.’

10/21/2022 lifestyle Comments Off on Who is Penny Mordaunt? The potential next PM with showbiz flair
Recent Posts