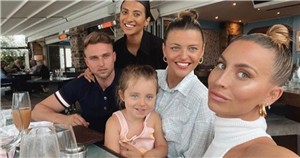 Ferne McCann has previously said "it takes a village to raise a baby", and in the seventh series of First Time Mum we get to know her "village" even better.

Ferne and Sunday, who recently caused chaos on This Morning, are surrounded by a close group of family and friends, who support the mother and daughter duo in their endeavours. But who exactly is in her squad and what do they do?

Ferne always looks impeccably stylish and she's got her stylist best friend Ellis partly to thank for that. The pair first met just after Ferne left the 'I'm a Celebrity, Get Me Out of Here' jungle in 2015 when they worked together.

Do you love celebrities, fashion, home interiors and beauty? Then do not waste another minute of your time and sign up to our daily newsletter, where you will receive all that – and more – straight to your inbox at 5pm every day.

From exclusive at home tours, cleaning hacks, the latest in beauty trends – and of course, all the latest celebrity gossip, look no further.

Pop your email address in the box at the top of this article, and et voila! Enjoy

Their shared sense of humour meant they quickly became firm friends with Ferne even saying they "speak 24/7" and admitting that "I can't live without you" to Ellis on an Instagram Live.

Nothing is off limits for these two who even discussed Ferne's toilet habits in the first episode of the series.

The pair even set up a fashion business together called Souki Belair, but they haven't posted on the brand's Instagram page since December.

Ellis has her own 'School of Style' business mentoring newer stylists, as well as styling other celebrities including Kate Ferdinand (who's hen do and wedding she attended) and Laura Anderson as well as working with brands such as I Saw It First and Lipsy.

Ellis boasts an Instagram following of 72k where she shares her own style, as well as behind the scenes of her job.

Carl is no stranger to cameras as he has his own YouTube channel with 75k subscribers. Here he posts regular lifestyle videos such as men's natural makeup and a 1st birthday party for his dog Carter vlog.

He previously worked at Reiss and Santander, before becoming a full time influencer. In a recent YouTube video he told fans he works from 4:30am until 11pm coming up with content ideas which includes his Instagram, which has 683k followers and TikTok, where he has an impressive 2 million followers.

Fellow reality star Billie and Ferne have been friends since their high school days, with Ferne eventually joining Billie and sister Sam on The Only Way Is Essex.

While Billie makes appearances on First Time Mum, Ferne often repaid the favour by showing up on ITVBe's Sam and Billie: Mummy Diaries.

Their 20-year friendship is as strong as ever with Ferne previously gushing that they were "destined to be friends." We love to see strong female friendship.

Danielle recently gave Ferne one of the biggest friend compliments by asking her to be a bridesmaid at her upcoming nuptials to Tommy Edney.

Ferne happily accepted saying, "A million times yes to my friend that I giggle with every single day over the same sh*tty banter."

Ferne and Danielle, who became close while starring on The Only Way is Essex together, share a love of fitness even working together on workouts for fans.