Green shoots are springing up in NSW and Victorian forests due to a triage effort to aid recovery of native wildlife from severe damage from the Black Summer bushfires, including the largest ever study of Australian plants.

Bushfires in the summer of 2020-21 burnt 12 million hectares across Australia. It coincided with a severe drought and ongoing damage from feral predators and weeds, both of which thrive in burnt landscapes. 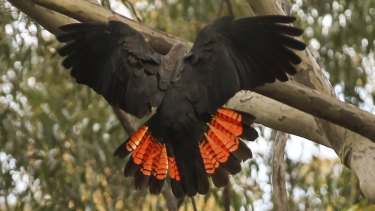 Glossy black cockatoos are now listed as vulnerable due to habitat loss from the black summer bushfires.Credit:Alex Ellinghausen

The Commonwealth Threatened Species Scientific Committee has released its one-year review of the bushfire response, including an unprecedented nationwide plant study that identified 486 species prioritised for field studies and 75 species in need of urgent intervention to prevent extinction.

It also found 41 animal species and seven ecological communities – including two temperate rainforests – may be considered to be categorised as endangered or needing greater intervention to ensure their survival. More species could also be added in the coming years as experts identify the full impacts of the fires.

Now nest boxes are being fixed into trees to help greater glider populations bounce back from habitat lost when fires swept through their ranges in Victoria, NSW and Queensland.

Both of these typically shy species have been a noticeable addition to many suburban areas as they seek new habitat. State and federal governments are also rolling out programs to preserve unburnt remnants in their ranges, as well as restore habitat trees on public and private land.

Funding for the work is being drawn from the federal government’s $200 million bushfire recovery fund and delivered through state governments – which also supports plant recovery work like seed collection and large scale weed removal.

“While the fires were still burning in 2020 we were developing strategies to bring together wildlife experts, land managers and threatened species scientists and the report shows how valuable that process has been,” Federal Environment Minister Sussan Ley said.

Western barred bandicoots have been returned to the wild in NSW for the first time in more than a century with 13 released into a feral-free zone in Sturt National Park in the north-west corner of the state. The little marsupials, also known as Shark Bay bandicoots, are now found in just three locations on the mainland after cats and foxes wiped out their populations. 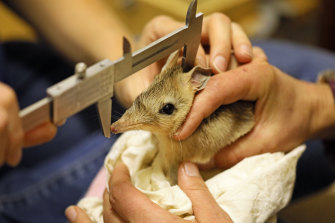 Western barred bandicoots have been released into the wild in NSW for the first time in a century.

“This project will see the global population of Shark Bay bandicoots increase by at least 20 per cent,” NSW Environment Minister Matt Kean said.

Macquarie University senior lecturer Rachael Gallagher headed the bushfire study covering all of Australia’s 26,000 plant species, which she said was the first step in a long recovery.

“That needs to be backed up with actions on the ground … that’s where the rubber hits the road for recovery,” Dr Gallagher said.

“The fires were the largest that we've had, especially where they co-occurred with other threats like drought and plant diseases. Recent rain has certainly helped on the east coast, that has been the number one thing required across the range – but not so much in Western Australia where they’ve gone into a post-fire drought.”

08/01/2021 lifestyle Comments Off on ‘Where the rubber hits the road’: Australia’s bushfire recovery effort heats up
Recent Posts