Earlier this month, 57-year-old Lane Unhjem suffered a devastating blow while working on his farm in North Dakota. One of his combines, which harvest crops, caught fire and he had a heart attack while working to put it out.

Unhjem was airlifted to Trinity Medical Center in Minot, North Dakota, where he is still recovering, his family said. His beloved farm in Crosby was left behind.

A close family friend, Jenna Binde, wanted to organize a group to help out on the farm while Unhjem was out of commission. Binde and two local farmers began to organize a harvesting event, but she told CBS News she didn’t have to do much to rally the troops.

“Farmers started calling and asking if they could help,” she said. “Within two hours of him being flown out of Crosby, I had over half the equipment and people already lined up.” 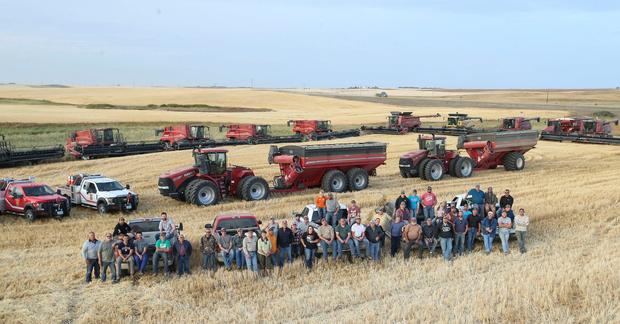 Binde said locals who knew she was close to the Unhjem family reached out to her — she never had to call anyone herself. On September 12, 60 volunteers showed up to the Unhjem farm, bringing 11 combines, six grain carts and 15 semis with them.

“We live in a pretty rural area, so anyone within 10 miles can be considered a neighbor,” Binde told CBS News. “Most were within 10 miles but others traveled farther than that because they are good friends with the Unhjems and wanted to pitch in.”

“You would think that with that many different operations coming together it would get a little chaotic out there, but that wasn’t the case. It was a very smooth day with no hiccups.”

Most of the volunteers were farmers or their farm hands, she said. Unhjem already had his peas harvested before his heart attack, but the group spent over seven hours on his durum wheat and canola crops. About a week after, another group came to harvest his soybeans for him.

And on Tuesday, another crew is planning to help move Unhjem’s hay bales, Binde said.

Unhjem is still in the ICU in critical condition, Binde said. “His family was super thankful and blown away by all the support,” she continued.

Not only was the Unhjems’ farm looked after, but the volunteers were, too. Another group put together a big meal for everyone to enjoy together at the end of their work day.

Binde said “the volunteers that came that day did more than just volunteer their time. They all had their own fields to still harvest but they selflessly put that behind them and made the Unhjems a priority that day.”

“It saved the family a lot of headache and frustration of trying to figure out how they would get their crops off without Lane or a combine,” she said. “It was a pretty remarkable day and I was so happy to be apart of it.”

Binde said she didn’t think the gesture was a big deal at first. “This is just what we do around here when someone in our community is in need of help,” she said. “What seems completely normal and natural to us here, unfortunately isn’t the case across the nation. I hope others read this story and forget about all the turmoil going on currently and just remember to lend a hand when needed and expect nothing in return. If we could all just do that, we’d be in a better place.”

09/21/2020 lifestyle Comments Off on When a farmer suffered a heart attack, 60 neighbors showed up to help out on his farm
Recent Posts
We and our partners use cookies on this site to improve our service, perform analytics, personalize advertising, measure advertising performance, and remember website preferences.Ok