STEPHEN GLOVER: What’s the point of our asylum system if we can’t help a persecuted woman facing a lynch mob?

Last year, Britain granted asylum to nearly 15,000 people, of whom about a third were children. To judge by past experience, the vast majority of them — though not all — will become good citizens.

But it is hard to imagine that anyone could have had a better case for asylum than Asia Bibi, a 53-year-old Christian Pakistani woman living in fear of her life.

A couple of weeks ago, she was released from prison by Pakistan’s Supreme Court, having spent eight years on death row after being convicted of blasphemy in 2010. 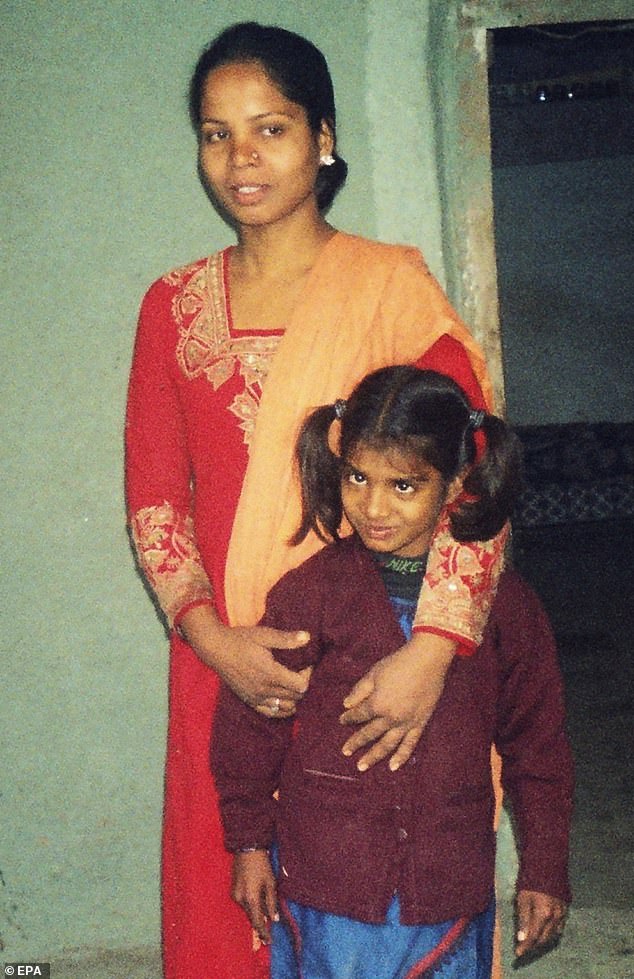 Her alleged crime? She had been accused on the flimsiest of evidence of insulting the Prophet Muhammad after a trivial squabble with Muslim neighbours. A mob practically beat her to death after she refused to convert to Islam on the spot.

Although Pakistan’s Supreme Court overturned her conviction last month and she is supposedly now free, Mrs Bibi is in hiding somewhere in Pakistan after hard-line Islamists took to the streets to protest at her release. Fearing more unrest, the Pakistan government won’t let her leave the country, which she is desperate to do.

This poor woman has been persecuted, ill-treated and abused. She has done no harm and committed no crime. Her only ‘sin’ is to be a Christian; specifically, a Roman Catholic. She has been in poor health and probably still is. Could anyone in the world have a better case for asylum?

And yet Her Majesty’s Government has so far declined to offer Asia Bibi sanctuary, though Christian MPs and peers are lobbying on her behalf. Our chaps in the Foreign Office are thought to be especially queasy.

Their apparent funk is not entirely contemptible. That is to say, it is just about understandable. Mandarins fear that if Britain rescued Mrs Bibi from her tormentors, they might turn their ire on British interests in Pakistan.

No one should underestimate the fanaticism of these diehards. In 2011, the then governor of the Punjab, Salmaan Taseer, was murdered after he attempted to gain clemency for Asia Bibi. Mrs Bibi’s own lawyer has fled the country. The Supreme Court judges who released her have been threatened.

And all this is going on in the context of repeated acts of terror by Islamist zealots against Christians, who form a small minority in Pakistan. In recent years, hundreds have been murdered in a spate of bomb attacks on churches.

So it is not altogether surprising that the British Government appears somewhat hesitant. To be blunt, it fears the High Commission in Islamabad could be burnt to the ground if it offers a lifeline to Mrs Bibi. The lives of British nationals in Pakistan might even be at risk.

As I say, I can understand the qualms of HMG. I can even sympathise with the predicament of the Pakistan government, whose recently elected prime minister is the Oxford-educated former Pakistan cricket star, Imran Khan. 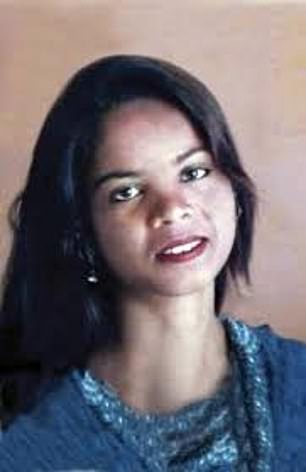 The Pakistani authorities fear that if they allow Mrs Bibi to leave the country for sanctuary in the UK, or anywhere else, they could precipitate riots and mayhem on the part of medieval-minded bigots who regrettably hold such sway in their country.

But the more one thinks about it, the clearer it is that the British Government must not cower in the shadows for fear of provoking these backward bullies, who neither respect the rule of law nor freedom of religion.

For what is the point of having an asylum system if the claims of an innocent woman in agony are overlooked? Don’t justice, decency and mercy combine to demand that Asia Bibi be helped?

There are, I’m afraid, examples of our sometimes dysfunctional asylum system assisting those who wish us ill. Ahmed Hassan was given asylum in 2015 though it was known he had fought as a child soldier for Islamic State. Earlier this year, he was jailed for a minimum of 34 years for launching a terror attack on the London Underground.

Last year, two Albanians who had falsely pretended to be persecuted Kosovans were allowed by the Supreme Court to remain in Britain. Not only had Dinjan Hysaj and Agron Bakijasi produced bogus information to obtain citizenship, Hysaj had even been jailed for an attack in a pub.

I could go on. It’s not difficult to find instances of people who, despite being granted asylum, go on to commit crimes, sometimes of terror.

In sharp contrast, Asia Bibi is a victim on a heroic scale who has suffered a very great deal despite doing no wrong — and seems certain to go on suffering for as long as she remains in Pakistan.

Would I say the same if she were a persecuted Hindu or even a Muslim? Absolutely.

I admit to feeling a special affinity with her because she is a Christian, as I am. I note, too, that there are several million Christians in Pakistan as a result of the conversion of their ancestors under the British Raj. Don’t we have a degree of historical responsibility?

But I also believe that Christian compassion would require us to help anyone in her predicament, whatever her religion. It is not so much Mrs Bibi’s Christian status that marks her out for rescue as our Christian duty to go to her aid. And that, it seems to me, is being hindered by Foreign Office caution.

It may also be that some ministers are scared of a hostile reaction among a handful of Islamic extremists in this country. If so, that would be shameful. 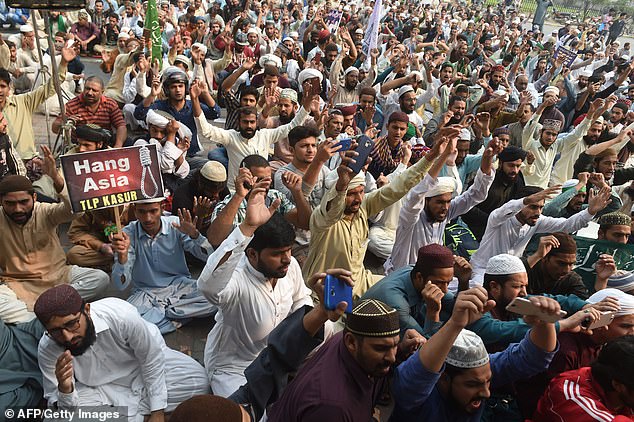 Protest: Supporters of a hardline Islamist party held a protest in Lahore after Ms Bibi’s conviction was overturned on Wednesday

Surely the British Government should not allow the fanatical views of any section of society to interfere with the proper conduct of a civilised nation. To cave in to bullies who threaten intimidation and violence would be a betrayal of this country’s values, which are endorsed by decent people of all religions and of none.

As for the Pakistani authorities, I can see they find themselves in an even more delicate quandary because of the millions of fundamentalists who might take to the streets if Mrs Bibi were allowed to leave the country. It is unfortunate that they have so far prevented her doing so, and also that they have agreed not to oppose a petition for a review of the Supreme Court decision to free her.

And yet I am sure there are many enlightened Pakistanis, who deplore the hounding of this blameless woman. The Supreme Court judges who released her in defiance of the mob would seem to be people of this sort.

The government in Islamabad has to decide whether it wishes Pakistan to be seen as a country which still observes the rule of law and common decency — or is regarded as a rogue state that can no longer be trusted. 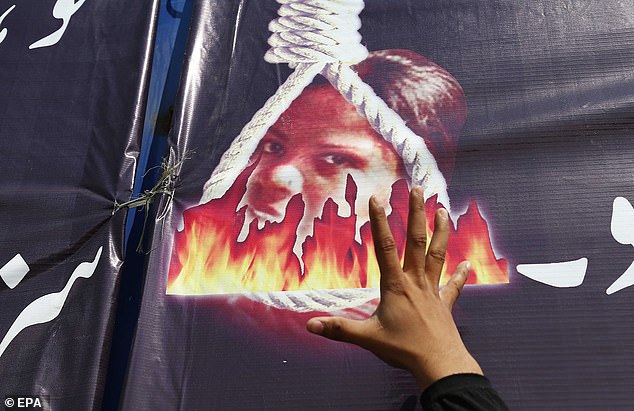 Threats: A poster carried at a protest in Karachi shows Ms Bibi’s burning head in a noose

Britain has some leverage with Pakistan — after all, it receives nearly half a billion pounds of Foreign Aid from us every year — and I hope that ministers will strain every diplomatic muscle to persuade the authorities there that Asia Bibi should be given sanctuary here.

Her life remains under threat. She can never be safe in Pakistan. More than any asylum seeker imaginable, she is worthy of our help. If, God forbid, anything should happen to her, there will be blood on British hands.

11/13/2018 lifestyle Comments Off on What’s the point of asylum system if we can’t help a persecuted woman?
Recent Posts