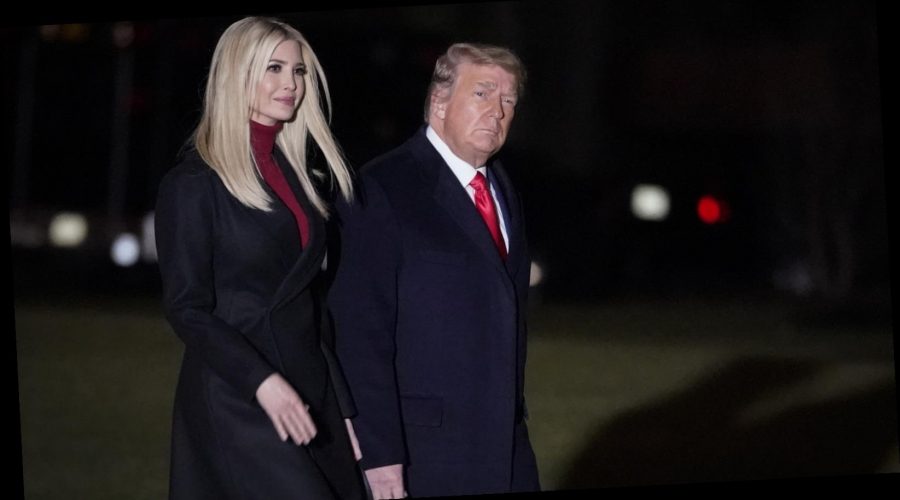 The end of Donald Trump’s presidency meant the end of an era for his family members, too. The now-former president’s administration included daughter Ivanka Trump and her husband, Jared Kushner, as senior aides (via People). While her husband attended to diplomatic matters and criminal justice reform, Ivanka championed women’s rights overseas, pushed for maternity leave laws, and helped create the Paycheck Protection Program to support small businesses during the COVID-19 pandemic (via Biography). It was a considerable jump in status for a woman whose prior claim to fame was being a real-estate developer and a judge on the panel of The Celebrity Apprentice.

In the months leading up to the November 2020 election, Ivanka and her siblings campaigned hard for their father and stood behind him as he claimed that voter fraud was behind his loss to Joe Biden. But when his last minute rally ended in chaos of historical proportions and an unprecedented second impeachment, she knew it was time to prepare for post-White House life. With characteristic calm and efficiency, Ivanka Trump did just that.

Ivanka Trump prepared to move out of D.C.

With Trump and former First Lady Melania set to move back to his Mar-a-Lago estate in Florida, there was no compelling reason for the Kushners to stay in Washington themselves. As New Yorkers, neither Ivanka nor Jared had close ties there, and there’s nothing to indicate that they had any deep love for the city or its residents. Indeed, they’d been the subject of criticism a number of times, including their lax adherence to COVID-19 precautions, which led to Ivanka’s having to change her children’s school (per CNN). Town & Country notes that the former first daughter also faces potential legal trouble surrounding tax write-offs, making it even more urgent for the family to find a quiet post-presidential home.

Shortly after the insurrection on the Capitol, reporters saw a moving van outside the Kushners’ six-bedroom home in D.C.’s exclusive Kalorama neighborhood (via NY Daily News). It turned out to be hauling donated items, but that was preparation for the bigger change to come. Ivanka and Jared bought a $30 million lot on Indian Creek Island in Miami, where they plan to build a permanent house. For now, they’ll be making their home in a luxe condo in Miami’s Surfside neighborhood (per Fox Business). The pyramid-shaped building comes complete with a fitness center, children’s play space, a heated indoor lap pool and other amenities.

Ivanka left a final message of thanks

There was some speculation that Ivanka Trump would attend Joe Biden’s inaugural as a goodwill gesture and, perhaps, a bid for supporters for a future political campaign (per Daily Mail). However, she ultimately opted not to join the ceremony. Perhaps feeling regretful about what might have been her second term as a White House insider, Ivanka dressed in an all-black ensemble — including a black floral face mask — as she went to the White House for her father’s final day in office on Tuesday. She gamely waved for the cameras before stepping into the waiting limo (per People).

As her father and stepmother did hours earlier, Ivanka delivered a farewell message to America via her Twitter feed. “It has been the honor of a lifetime to serve as an Advisor to the President,” she began. “I am so proud of what we’ve accomplished and excited for the future.” She thanked the citizens she had served for their love and support, and said they had “reinforced my abiding faith in America.” Ivanka closed by offering prayers for the incoming president and vice president, their spouses, and all the elected leaders: “As Americans we must all pray for their success.” Ivanka and her family gathered to watch now-former President Trump delivered his final speech at Andrews Air Force Base (via Daily Mail). Dressed in a black-trimmed white suit, Ivanka blinked back tears as she listened, then received a kiss from her husband as they prepared to enter the new phase of their lives.