Over the years at 60 Minutes, we’ve been in more than a few tunnels. We explored Mexican drug lord El Chapo’s subterranean escape routes, burrowed through a Roman villa buried by Mt. Vesuvius and traveled the depths of the New York City subway. But nothing prepared us for a place called Moab Khotsong, a South African gold mine that extends nearly two miles beneath the surface. In their pursuit of gold, South Africans have dug the deepest holes on earth. The country was the world’s top gold producer for decades. Now the gold is running out, just as these ultra-deep mines have attracted a new breed of miner—on a very different quest. We went along for the adventure. 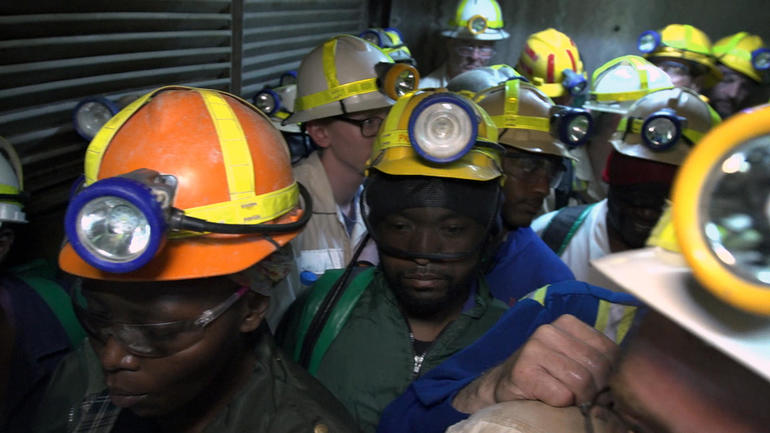 Miners take the elevator down into the mine

In the early morning light, tall mine shafts loom over the Vaal River basin two hours southwest of Johannesburg. This once was a booming gold field, now most mines lie abandoned but Moab Khotsong is bustling. Long before the sun rises, thousands of miners start lining up for the triple-deck elevator called “the cage.” It’s jammed but more always push on, and early one morning, so did we.

We’re packed in as tight as sardines, the electric bells signal we’re ready, and the cage drops. Slowly at first, then picks up speed fast. We plunge 450 stories straight down. It’s the longest elevator ride on earth.

The cage rattles and whistles as we descend, the air gets more humid the deeper we go. Our lifeline to the surface is a machine called the manwinder, massive coils of steel rope two inches thick that attach to the cage and unspool faster and faster. We dropped two miles in a couple of minutes and emerged in an underground city.

To get to the gold, miners must walk miles through a vast maze of dimly lit tunnels. Sometimes you’re lucky and can catch a ride, but mostly you just walk. For Leroy Lee, it’s in the blood. His father worked in the mines. Now it’s his turn. His family depends on his job.

The gold in these ultra-deep mines is found in narrow veins, laced through the rock. Some are no wider than a pencil. It’s cramped at the rock face and we crouch alongside the miners as they work hunched over in the dark. The noise from the drills is deafening. Massive air conditioners cool the tunnels but it can still reach 120 degrees down here.

At the end of the shift, we had to rush not to miss the elevator back up. It doesn’t wait for anyone. 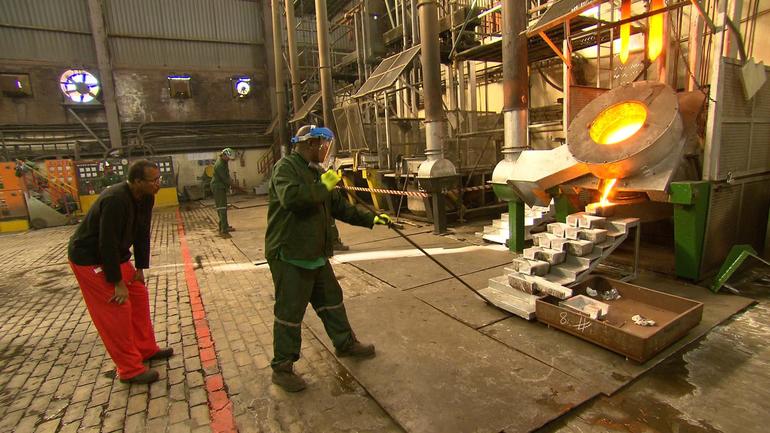 And here’s where all that breaking rock pays off: the smelter. The ore is smashed and pulverized in a grinder before being fed into a furnace. Monga Kasongo, who runs the operation, told us we were the first tv crew to film the weekly ritual they call “the pour.” We all had to wear these special pajamas with no pockets so we couldn’t steal anything. The heat was intense as the furnace reached almost 2,000 degrees. The gold turned to liquid and poured down into the moulds.

Monga Kasongo: When I saw it the first time, I was like “wow.” That’s something that keeps me going. When you hear people who have never seen gold or touched it, I feel like I’m more privileged.

These bars will be refined again to 99.99 percent purity before they’re sold for coins and jewelry. The mine used to process about 60 tons of gold a year. Now it’s just a quarter of that. Still, the day we watched the pour, there was a pretty good haul.

Bill Whitaker: Wow, this is quite heavy…

Monga Kasongo: Yes, it is.

Bill Whitaker: How much is this?

Bill Whitaker: In U.S. dollars, we’re talking seven and a half to eight million U.S. dollars for what you poured today? 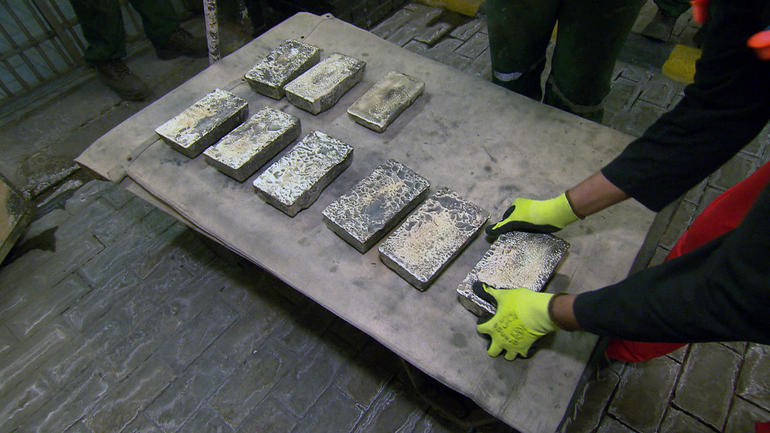 It’s one thing to come here for the gold but now this harsh environment has attracted others: scientists hunting for what they call extreme life.

Bill Whitaker: In these caves?

An international team, led by Princeton geoscientist Tullis Onstott and Belgian biologist Gaetan Borgonie, are pioneers in the search for life buried in the rock where no one thought it could survive. Borgonie says his colleagues thought he was crazy when he took a sabbatical to try to prove there was life deep underground.

Gaetan Borgonie: Oh, come on they said. You’re going to go to South Africa for a year, you’re gonna go look for something that does not exist there.

They’ve lost count of the number of trips to the bottom of the mines searching for life hidden in the ancient water, seeping through the rock.

Gaetan Borgonie: This is a completely different world down there. There are different rules.

Bill Whitaker: How so?

The next day we went along with them to the deepest level of the mine. For them it was just another day at the office, for us it was an eye-opener.

With just the light from our headlamps, we waded through a tunnel that had been flooded with cold water to cool it down. Then we grabbed a chairlift cut through a channel of rock, except this one went down. 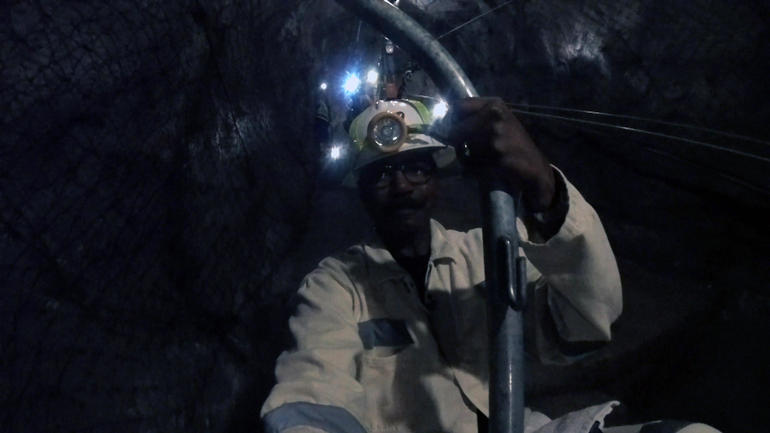 Correspondent Bill Whitaker descends into the mine

Picture five of New York’s World Trade Centers stacked on top of each other. That’s how deep in the Earth we are.

When the chairlift stopped suddenly we had to hike down the last 50 yards to the bottom. Then, at the end of an abandoned tunnel our scientists found something amazing.

Tullis Onstott: I’ve been looking for 20 years for a salty water deposit like this. Never found it until now.

White patches on the wall turned out to be salt.

Bill Whitaker: Is that edible?

Bill Whitaker: This is ancient salt?

Tullis Onstott: That’s the question. Has to be– has to be ancient salt.

And the source? This dripping salt water.

Bill Whitaker: What does that tell you?

Tullis Onstott: It tells me this water is extremely old. Cause in these rock formations they were formed three billion years ago. There weren’t salt deposits back then.

They believe this water could be all that’s left of an ancient ocean and where there’s water, there can be life.

Tullis Onstott: We could be looking at something which has never seen the life that has evolved on the surface of the planet.

Bill Whitaker: All from this cave two miles down in South Africa?

Tullis Onstott: All from gold mines in South Africa. Exactly. 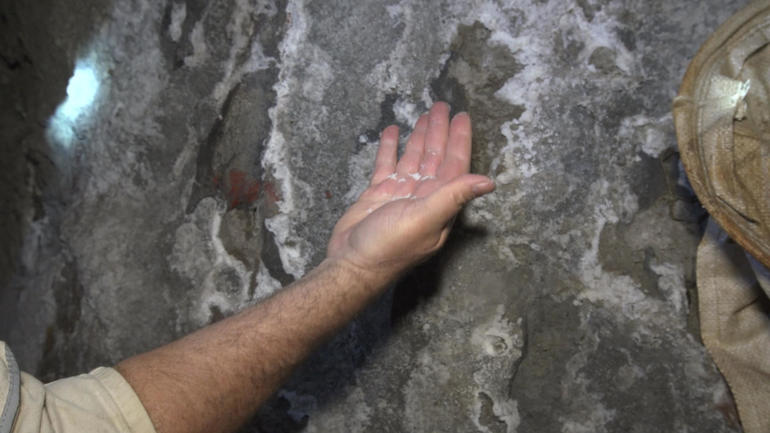 Salt found deep inside the mine

In 2011 they found what no one thought possible: these tiny worms living in a pocket of water 5,000 years old. What you’re seeing is magnified. These worms are no bigger than a human hair. It was a species never-before-seen. It survives without sunlight, deep in the hot underworld, so they called it Mephisto or, “the devil.”

Gaetan Borgonie: That’s where my worms live. They eat bacteria.

Bill Whitaker: The first worm you found was in something like that?

Using an endoscope camera, they were the first to film this deep inside the earth’s crust. This is the devil worm’s home. Before this, no one thought animal life could exist this deep.

Gaetan Borgonie: For me it is big, because for me personally, I had to fight quite a lot of people to be able to do this. On a personal level, that was the biggest victory for me. In the total grand scheme of things, it’s just a worm.

They were surprised to find other living creatures too, so many they called them a zoo. A crustacean, about one sixty-fourth of an inch. An arthropod, a flatworm, and single-cell bacteria. It set off a storm of speculation about where else extreme life might exist, perhaps even on Mars. NASA helped fund their research.

Gaetan Borgonie: If there is life here in the deep, then you should definitely dig on Mars because if life was ever there you will find some life form, I believe very strongly, still on Mars.

Bill Whitaker: So the Martians we meet in the future could be these single-cell organisms you’re–

Gaetan Borgonie: I think that would be the–

Gaetan Borgonie: –that is– yes, indeed. I think that would be the most likely. But be prepared to be surprised, I would say.

South Africa’s gold mines are now so deep they might as well be on another planet. 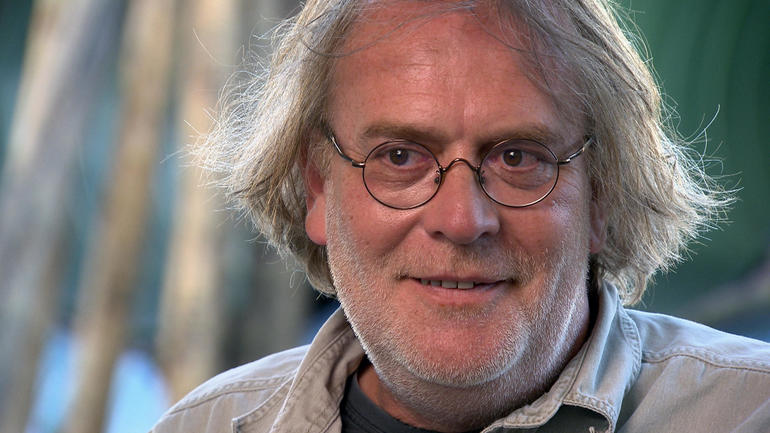 Bernard Swanepoel: I’m not sure that we really want to send human beings much deeper.

Bernard Swanepoel started his career underground and ended it as the CEO of Harmony Gold, which now owns Moab Khotsong.

Bernard Swanepoel: If you are in a successful mining team, it must be like a successful sports team. I mean mining is one of those activities where at the end of every shift you know whether you won or lost.

Gold was the lifeblood of South Africa. The way it’s dug out has changed little since apartheid when underpaid black miners often worked in mortal danger. At its worst, more than 800 workers a year died in mining accidents. No coincidence the struggle that led to apartheid’s defeat started underground.

Bill Whitaker: Gold and gold mining seem to be in the DNA of South Africa.

Bernard Swanepoel: South African gold mining especially has always been at the center of all political and other activities in our country. I mean our bad apartheid history is intertwined with gold mining. I mean a lot of the– a lot of the legislation to dispossess black people of land was in order to create cheap labor for South African gold mines.

Bill Whitaker: You grew up in a small mining town, during the era of apartheid. What are your strongest memories?

Bernard Swanepoel: Well, ultimately I’m a privileged person that, because I was white and I was male, those were the two requirements at the time to become a mining engineer.

Bill Whitaker: So are you the new face of South African mining?

Monga Kasongo: I will say yes. We are the new generation in the mining.

Just a dozen years after apartheid ended, engineer Monga Kasongo started managing the smelter. He told us he chose to move here from the Congo to work in the mines.

Bill Whitaker: Has that wound in South Africa been healed?

Now safety is paramount. You’ll find women underground and blacks are senior managers. Once some of the lowest-paid laborers are now among the highest. But this generation of gold miners know they may be the last. Of the 11 gold mines that once flourished around here, only three still operate. The mines are now so deep, it’s becoming too expensive to get the gold out. The story of the ultra-deep mines is nearing its final chapter. To dig the riches from such astounding depths took grit and brute force. Now South Africa’s resolve must be deployed to solving the next challenge: what to do when the gold runs out.

11/12/2018 lifestyle Comments Off on What lies at the bottom of one of the deepest holes ever dug by man?
Recent Posts