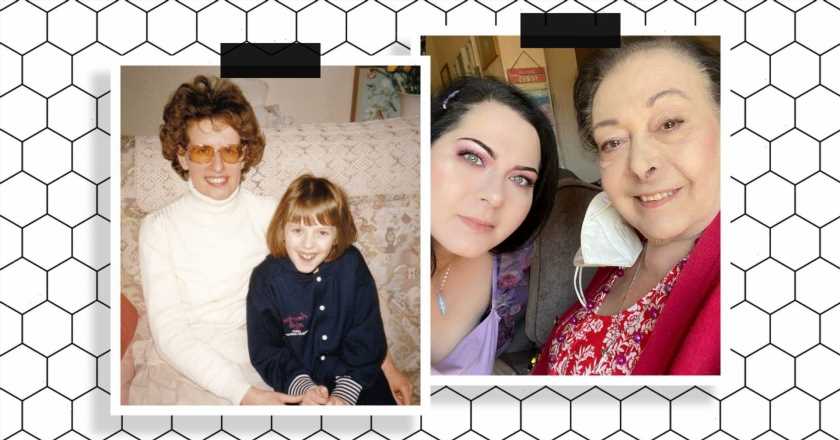 Mother’s Day is usually a time to celebrate the women who have taken care of us, but what about the women who have to care for the people who brought them into the world? Stylist speaks to two women about what it’s like to become a mum to your own mother.

Typically, Mother’s Day is an opportunity to celebrate older women who have mothered us in some way throughout our lives – birth mums, foster mums, aunties, grandmothers or family friends.

But we don’t often stop to recognise the young women who have, either by necessity or choice, put their careers, families and social lives on pause to care for the women who brought them into the world. The women who become mothers to their mothers.

Here, two women who ended up going against the grain of traditional mother and daughter roles tell Stylist about the challenges they have faced.

“Even as a little girl, I knew it was my job to protect my mum”

Christie Michael (left) with her mother.

Christie Michael has cared for her mum, who has epilepsy and frequent seizures, since she was six years old. Stylist contacted Michael through Carers UK.

For as long as I can remember, I’ve always known how to protect my mum’s head. I distinctly remember a time when I was six years old and my mum was rushing around the house getting ready for work when she suddenly dropped to the ground, hitting her head on the cement floor. It’s a sound I’ll never forget. I ran over to her, cupped her head in my hands and begged her to wake up. Luckily, I had been taught to ring 999 in an emergency and called for an ambulance. It was the first time I had been exposed to my mum’s epilepsy and seizures.

After that, the seizures and fits happened more frequently, often up to five times a week. It was only my mum and I, so I naturally became her unassigned carer. Even as a little girl, I knew it was my job to protect her and the weight of that responsibility left me constantly worrying about her.

Throughout school, my grades suffered as a result of caring for my mum but it didn’t stop me from going to college to study performing arts. My mum never tried to keep me from pursuing my dream to dance for a living. She showed her support with her words of affirmation and by working two jobs to support my education. Throughout college, I’d often be out of the house from early in the morning until late at night. I hated leaving her, but she wouldn’t let me stay at home to give up my future. When I left the house in the mornings, I encouraged her to stay in bed or near the sofa in case she fell.

After leaving college, I briefly worked as a dance instructor but had to give it up due to my own health conditions – spine damage and arthritis. I was in constant pain and I remember mum would see my discomfort and try to alleviate it by making me a cup of tea and having a chat. After a series of paid carers had given her inadequate care, I decided I would officially become my mum’s carer.

Christie Michael (right) has cared for her mother (left) since she was six years old.

For years, my mum and I took care of each other. I’d sleep by her bed at night, help her shower and take her out for the day. She would make me cuppas and tell me to sit down when my pain became unbearable.

During the first lockdown, mum took a turn for the worse. She was diagnosed with Alzheimer’s, dementia and full-blown epilepsy. This was the point when our roles were completely reversed: I felt as if I had become the mother.

Days can feel lonely and really hard. I can’t ask her to support me any more, but I don’t resent my mum – not one single bit. She gave so much of herself for years to make sure I could have a good life. Taking care of her is the least I can do. It’s my honour to be the one who still holds her head when she falls.

Helen Noyce (left) with her mother.

Helen Naylor was left to emotionally care for her mum who lied about being ill for 30 years. Naylor now believes her mother had a personality disorder, with one of the symptoms being Munchausen’s syndrome, where people make up or cause illness.

When I was seven, my mum was diagnosed with chronic fatigue syndrome  (ME) and my dad with a serious lung and heart problem. Dad was often at the pub, leaving me with my mum, who said she needed to sleep up to 18 hours a day due to her condition. I was left to raise myself and emotionally care for my mum, who always seemed to be unwell.

I remember being 10 and having a friend over when we heard a loud bang from the kitchen. I ran in to find the washing machine was sparking. I ran upstairs and yelled to mum to come down and help. When I arrived at her room, she was sitting up wide awake and told me I needed to sort it out for myself.

As I grew into a teenager, I struggled with my mental health. Life was really hard, but I didn’t make the link that it was my mother who was making it that way. I was expected to be her source of emotional stability, her firm foundation. She would tell me everything, even about her sex life, and I was meant to carry it for her.

At 18, I went to university two hours’ drive away from home. Even then, I couldn’t escape my mum. We talked every day on the phone. She said she had a relapse of ME and needed my support now more than ever.

Whenever I would go home to visit, the moment I walked through the door, she would tease me and make inappropriate comments that shouldn’t be said to your child – warning me about getting Aids and telling me I was ugly. But I took it on, like always, because she was my mum. She needed me to stick around.

Despite her emotional dependence on me, I adored her. To me, she was the most perfect person alive.

Straight after university, I married and soon after became pregnant. When I miscarried my first baby, mum told me my body was weak and couldn’t carry a baby. I continued calling her daily and visiting her frequently, even though I still carry the pain of that comment.

Helen Noyce says her mum claimed she had Myalgic Encephalomyelitis (ME) throughout her childhood.

Once my husband and I had two children, my mother started to go downhill. She had hundreds of falls each day and was eventually diagnosed with Parkinson’s. However, the nurses had suspicions and decided to take her off medicines. She was brought in for testing and was found to have absolutely nothing wrong with her – no ME, no Parkinson’s. She had made it all up, something I later found out she had confessed in her diaries.

The last time I visited my mum, knowing full well that none of her perceived illness was real, she plopped herself on the floor and started crawling toward me and shouting profanities. I put her in bed, ran out of the house, and never returned. People told me to forgive her, that she was my mother, and it was my duty to take care of her. But I couldn’t do it any more – I had to protect myself and my children.

Mum died just over a year later in 2016. Even though caring for my mother brought me immense pain for many years of my life, I have never grieved as much as I did when she died. I had lost a best friend, my mum.

Helen Naylor’s memoir My Mother, Munchausen’s and Me: A True Story Of Betrayal And A Shocking Family Secret (£7.99, Octopus) is available now.

If you are worried about your mental health or someone you know is, you can find support and resources on the mental health charity Mind, with NHS Every Mind Matters or access the NHS list of mental health helplines and organisations.

If you are struggling with your mental health, you can also ask your GP for a referral to NHS Talking Therapies, or you can self-refer. For confidential support, you can also call the Samaritans in the UK on 116 123 or email [email protected]