Another summer, and La Nina keeps holding on. What does that mean (and what’s an El Nino)?

Plans for a sunny summer full of hot days lazing on the beach are a little less likely now that a La Nina weather pattern has extended its hold over the Pacific Ocean, bringing a stream of wet easterly trade winds to Australia’s eastern seaboard. The Bureau of Meteorology has declared that a La Nina is in full swing and likely to hold until early 2023. It’s our third in three years – a phenomenon that’s occurred just twice before.

As a giant island, Australia cops weather from all directions. One of the main drivers of our climate, particularly for those living in eastern parts of the country, periodically roars out of the Pacific. Whether it’s an El Nino bringing extreme droughts or a La Nina whipping up severe tropical cyclones and floods, farmers and firefighters and almost everybody else have cause to keep a wary eye on subtle temperature changes in the waters to Australia’s north-east.

The equatorial Pacific is the place where these climate-driving beasts to our east are created. The Pacific accounts for about a third of the Earth’s surface area and so the complex interactions between the ocean and the atmosphere have a big sway over the global climate. Both the El Nino and La Nina are ends of a weather spectrum but they are known to scientists as the El Nino-Southern Oscillation (ENSO). And they’re key in shaping Australia’s weather.

What are El Ninos and La Ninas? What can we expect this summer? 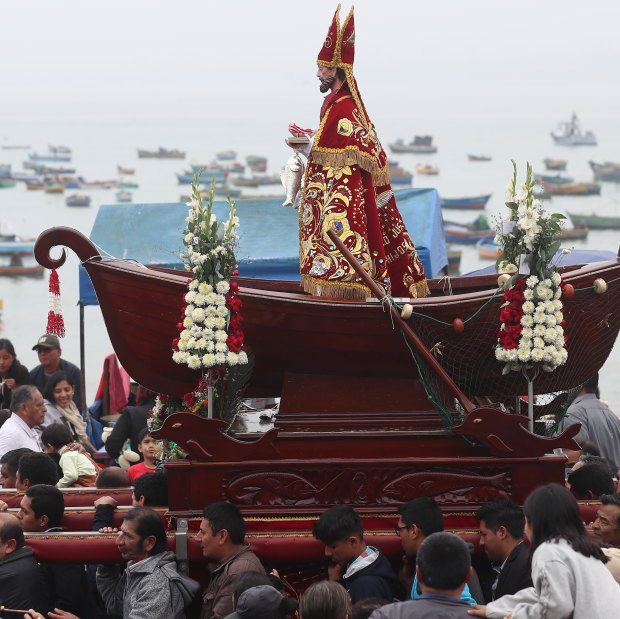 A Peruvian fishing community carries its patron saint. In the 1600s, fishermen coined El Nino (“little boy” or “Christ child”) to describe weather that left them low on seafood for Christmas.Credit:Getty Images

Where did the names Nino and Nina come from?

As with many natural phenomena, these gained a name before people understood what was really going on. El Nino, or “little boy” or “Christ child” in Spanish, was how Peruvian fishermen in the 1600s came to describe the appearance of relatively warm currents off the South American Pacific coast, often around Christmas. Since migrating fish prefer the more nutrient-rich cooler waters, El Ninos were associated with poor catches. In an early case of gender balance, the opposite phase was dubbed La Nina or “little girl”, making for fuller fishing nets.

As global communications improved, scientists began to identify relationships across the big ocean basins. Among those was Gilbert Walker, head of observatories in then British-ruled India, who applied maths to understand what drove the monsoons and their feast or famine characteristics. In recognition of his work, later scientists would dub the typically east-to-west winds across the surface of the equatorial Pacific a Walker Circulation. The strength of the Walker Circulation is gauged by surface air pressure differences between the French colony of Tahiti and Darwin, known as the Southern Oscillation index, or the “SO” in ENSO.

By the late 1960s, Walker’s work was linked to the changes in the Pacific, and El Nino began to enter the scientific lexicon. The issue, though, remained relatively obscure for general readers.

An article from The New York Times headlined “Drought, bushfires, floods – blame oscillation” ran on the front page of The Sydney Morning Herald‘s February 28, 1983 edition, not long after the Ash Wednesday fires had scorched much of South Australia and Victoria earlier that month. Among The Age’s first mentions came on March 16 that year, in a short article on its front page that blamed “an unusual weather phenomena known as ‘El Nino’” after almost all 17 million adult seabirds “mysteriously disappeared” from Christmas Island in the Pacific. 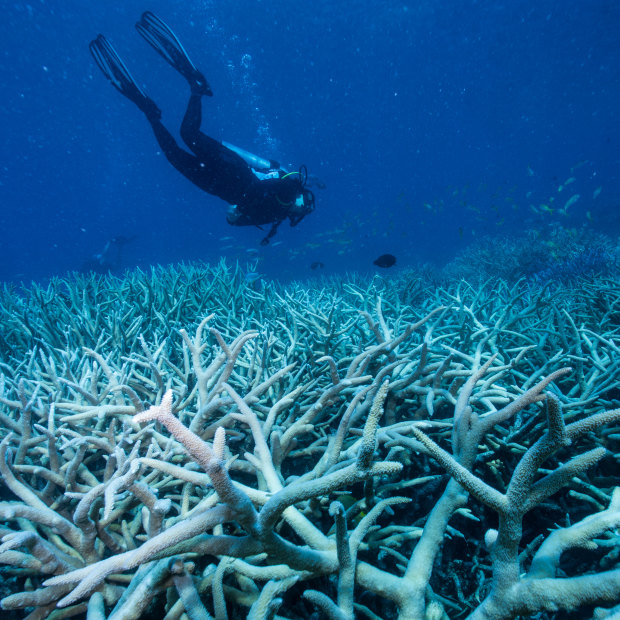 Coral bleaching of the Great Barrier Reef in 2016 was attributed at least partly to an El Nino.Credit:Jason South

How do you identify an El Nino or La Nina?

El Ninos and La Ninas are actually quite common. They occur in a cycle that ranges from two to eight years, with El Ninos slightly more frequent. El Ninos are associated with drought (although drought is not always caused by an El Nino). El Ninos and La Ninas usually last between nine and 12 months but some, particularly La Ninas, can linger for two years in a row. Three-year La Ninas, as we are seeing now, are rarer, having occurred only in 1973-1976 and 1998-2001. Since 1900, Australia has had 20 La Nina events, 13 coinciding with flooding in eastern states – the average rainfall from December to March has been 20 per cent higher than the long-term average.

What’s different about this three-year La Nina cycle different is that it’s occurring after two consecutive years of a negative Indian Ocean Dipole. This climate driver refers to the patterns of sea surface temperature. While positive dipoles are associated with dry weather, negative dipoles can bring heavy rainfall and flooding to parts of Australia. This means we’ve got two climate drivers in full swing bringing more rain over parts of Australia during spring.

As for knowing when one of these phases is upon us, scientists look to the location of relatively warm or cool water in the equatorial Pacific. To this end, they divide the Pacific into sections. The section of those waters straddling the International Date Line dubbed “Nino 3.4” is the window they focus on. If waters exceed a certain cool threshold level for at least three months, a La Nina is declared; if the temperatures are warmer than usual by that same rate, it’s El Nino time. It can also be neither, or neutral.

Just what the threshold is varies slightly between agencies. For Australia, the necessary exceedance is 0.8 degrees celsius, while for the US’s National Ocean and Atmospheric Administration, 0.5 degrees suffices.

The weather bureau uses multiple NOAA satellites and drifting buoys, and a base period of 1961 to 1990 to set its standard, says its climate prediction services manager Andrew Watkins. “The reason we use 0.8 degrees was from research done by BOM staff many years ago, looking at the best value that matches Australian impacts, which are mostly in our winter and spring,” he says. “I suspect NOAA uses 0.5 degrees because their impacts are at different times of year to ours, so it better matches their needs.” 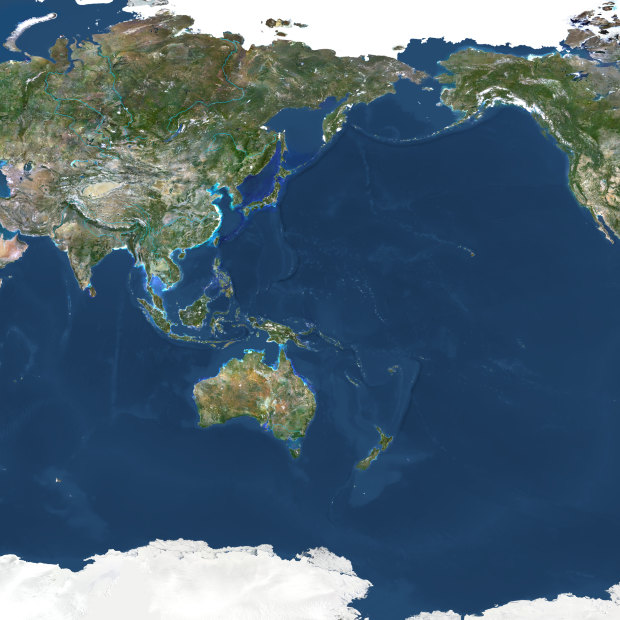 The Pacific Ocean, stretching from eastern Australia and Asia to the west coasts of the Americas, covers about a third of the Earth’s surface – and is where La Ninas and El Ninos are formed. Credit:Getty Images

Why does it matter if it’s warmer or cooler in the Pacific?

The world’s oceans are absorbing most of the heat we’re emitting globally. During La Nina years, the ocean absorbs more heat; in El Nino events, the ocean processes suck in less heat and may even give it back. Convection or rainfall and cloud cover tend to follow the warm patches, as you can see on the diagrams below. There are three phases of the ENSO pattern, as conditions seesaw between El Nino and La Nina and the neutral stage in between.

During neutral phases of ENSO (above) the easterly trade winds draw up cooler water in the east while warm waters build up to Australia’s north. The winds loop around, across the ocean surface and then up into higher levels of the atmosphere and then back around again in a cycle.

When it’s a La Nina (above), those trade winds are stronger than usual and the warm patch, where air is more likely to rise and create clouds and rain, is pushed closer to Australia. That typically translates into above-average rain in winter and spring for eastern Australia, and a more active than normal tropical cyclone season (which can also bring rain far inland or down the eastern coast).

On the flipside, with the El Nino (above), those winds stall or even reverse, leading to warmer water building up in the central Pacific. Air tends to descend rather than rise over eastern Australia, suppressing rainfall and reducing the number of cyclones (whereas over the Americas, there’s likely to be more rain). As with those Peruvian fisherfolk, the impacts are far-reaching. El Ninos also typically mean very dry spells in Indonesia and Papua New Guinea, for instance, while the southern US is wetter than normal.

Another consequence of El Nino is the Pacific Ocean, as it absorbs less heat, spikes global temperatures such as it did in 1998 and 2016. Conversely, La Ninas tend to be cooler years, although with global warming heating up background temperatures, even “cool years” are now relatively warm and often exceed recent El Nino events.

What happens when we heat up everything?

The famous greenhouse effect is well known: pump more heat-trapping gases into the atmosphere and everything warms up. However, for complex interactions between the air and oceans, the impacts are difficult to model, not least because they overlay natural fluctuations that run into years and decades. One difficulty is assembling historical data that can help researchers peer long enough into the past to separate a climate signal from the background variability.

The book El Nino Southern Oscillation in a Changing Climate draws on the work of 98 authors to examine how a warming world is already affecting ENSO and what might lie ahead. The small number of El Ninos and La Ninas with precise data makes teasing out the trend difficult. Still, as the authors say, “there is evidence to suggest that the impacts of ENSO are being compounded by climate change even now simply because of the super-position of ENSO conditions on a warmer background state”.

Among examples cited are the rainfall extremes in Australia during the 2010-11 La Nina, and the record year for tropical Pacific cyclones and mass coral bleaching on the Great Barrier Reef and beyond during the 2015-16 El Nino.

Agus Santoso, one of the book’s editors and a senior research scientist at the University of NSW, says one implication is that La Ninas will be easier to produce under global heating. The difference between sea surface temperatures and those at depth will be greater, “facilitating the coupling of winds and upwelling water” necessary to trigger an event, he says.

Current model projections also suggest that extreme El Ninos will double in frequency from one in 20 years to once every decade by the end of this century. For La Ninas, extreme events will go from once every 23 years to once every 13, according to Cai Wenju, a senior CSIRO scientist and another of the book’s authors. Santoso, though, says the worst extremes for Australia may come from El Ninos because they worsen the droughts and severe bushfire seasons that are already underway.

One mechanism is that the drying during years of a positive Indian Ocean Dipole, such as in 2019, tends to reinforce an El Nino that is under way in the Pacific. But a negative Indian Ocean Dipole phase does not appear to alter the intensity of a La Nina event if they coincide. “The El Nino is always stronger than a La Nina,” Santoso says. “It’s not a mirror image.”

Scientists are still understanding what triggers an ENSO event – in 2014, for example, an El Nino was forecast but didn’t arrive (until a year later as the first extreme El Nino of the 21st century). The complexity of the systems being studied means scientists have to be prepared for surprises – and possibly, they won’t be good ones.

“Research has been going on for many decades but we keep getting challenged by what nature throws at us,” Santoso says. “You have to prepare to understand the unknown.”

This explainer has been updated since it was first published in December 2020.

09/15/2022 lifestyle Comments Off on What does a longer La Nina mean for your spring and summer?
Recent Posts