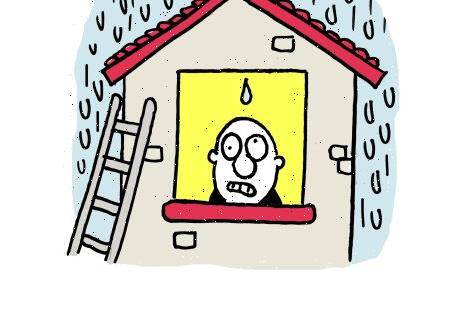 Touch wood the worst of the floods are over, this year anyhow. But touch wood in most suburban houses during the heaviest rainfalls we’ve ever had and you’ll find doors won’t close, windows jam shut and the parquetry pops.

Let me take you on a tour of trying to keep your house dry, clean and in good working order. It’s not easy. And most of us should have started prevention before the latest downpours.

Number one trouble spot: the roof 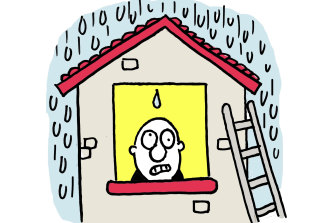 Our guttering fails because we’ve failed it. We didn’t clean the gutters for months because of the terrible weather. That one cracked tile is now a gorge, gushing water through the ceiling and light fittings. Dean Carter, head teacher, plumbing at TAFE NSW Mount Druitt, says don’t try to fix this yourself. Why is that? Carter recounts stories of those who’ve fallen through ceilings trying to locate that one leak. It’s also much harder to be safe doing this in the wet. His best advice is to check regularly.

Cost? $70-$150 per hour including the safety equipment and harnesses as well as the labour. Monash University researcher Aleksandra Natora says over 3000 people fell off ladders and building structures in 2019 – 2020 and 42 people died. Carter says get a licensed roofer to do the work. I’m with him.

Most of us feel guilty because we don’t spend enough time in the garden or watering it. Now the plants are wilting from overwatering and dying for lack of sunshine. Scott Hawken, head of the landscape architecture program at the University of Adelaide, says bluntly: “Plants drown. They rely on good aerated soils and without drainage, they die.” We can’t do much about the sunshine until La Nina buggers off but we can use little feet under our pots to help water drain (cost, from $2), and we can dig channels around our plants to stop water pooling (cost, you already have a shovel so it’s just your labour). How can we prevent this garden mayhem? Plant bromeliads which thrive in all conditions. Hawken jokes about how we should plant reeds such as carex appressa in our ponds and throw in a few fish. If it stops raining, I might feel like laughing.

Household guru Shannon Lush has so many good tips for mould removal (including this great recipe using oil of cloves) and she says that musty smell in our cupboards after weeks of rain is almost always attributable to that nasty fungi.

“That smell is mould fart,” she says. Her other top tip is hanging six white sticks of chalk bundled together with a ribbon in your cupboard. When you think your cupboard has dried out enough, hang out the chalk and the ribbon in the sunshine (if we ever get it again) and when it dries out, start all over again.

Lush isn’t a fan of dehumidifers but I’m a sucker for technology. I’ve just bought one and it sucked nine litres of water out of my grandson’s room over three days and the sheets feel crispy. Scott Barnes, product category manager, households for Choice Australia, says dehumidifers have always been around and consumer interest has spiked dramatically just as our rainfall levels have. Go for desiccants not refrigerants. Cost varies wildly but mine was $499 after a bit of shopping around.

Joe Beneduce, commercial cleaning teacher at TAFE NSW, says a professional cleaner will cost from $30 to $45 per hour and will even do ceilings. 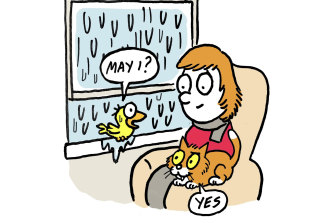 Animals aren’t too fond of the rain either, which is why we have seen an increase in them seeking shelter. Fine if it is your cat or guinea pig but no-one (especially not me) wants to share space with mynahs or magpies. Holly Parsons, urban bird program manager at Bird Life Australia, says these birds have a long history of living with people and of taking advantage.

“If someone is feeding them, they can get very comfortable. I’ve certainly seen instances of them making themselves at home,” she says.

Parsons says these birds love nesting in roof cavities and happily breed there, bringing their bird lice with them and dropping poo everywhere. What to do when they fly into your house? Open all your doors and windows and leave lots of space for them to escape. Won’t leave the house? Try throwing a towel over them and then picking them up. Can’t get rid of them? Call WIRES or Sydney Wildlife Rescue. Cost? Depends what they’ve knocked over or pecked at. Get them out of the house ASAP.

And let’s not forget the leeches, mosquitoes, spiders and shovel-headed garden worms (terrifying), appearing where we least want them.

Number five: wooden you know it 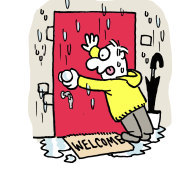 Glenn Hunter, head teacher, carpentry, at TAFE NSW Nirimba, says timber is a sponge and some timber products, such as craftwood (MDF), really soak up moisture. That, combined with poor ventilation, makes our current weather event a challenge for anyone who wants their doors and windows to close.

Parquetry expands too, which is why it may pop out of its beautiful patterns during weather like this. Hunter says it is fine to have a go at fixing this yourself but sometimes you need a professional, a licensed tradesperson will cost a minimum of $55 plus GST. And maybe wait until there have been three to four weeks of dry weather. That’s what Hunter predicts it would take for wood to get back in its box.

If you can see water running down the walls, get your art works off pronto, open up the frame and the backing and let the air in, says Sophie Brown, of Sophie Brown Paper Conservation and Conservation Framing. Most of us don’t get our art works framed to museum conservation standards (costs a fortune and most of us can’t tell the difference) but a wet, mouldy work is an emergency so the best thing to do is to take it to a professional. Brown says mould on works is like an iceberg. There’s a little on the surface but the big impact is what’s beneath and that can affect works on paper, bark and canvas. She employs an accredited conservationist from the Australian Institute for the Conservation of Cultural Materials to do the remediation. What will it cost? So many variables but Brown estimates a small work, say 20cm by 20cm, would cost between $300 and $500 for mould removal.

Last word: adjunct professor of building at the University of Western Sydney Robert Whittaker laughs when I ask him how long it will take to get a qualified tradie right now and, more seriously, what will it cost.

“How long is a piece of string? People want certainty. If you are going to pay more you will get service sooner and that comes down to availability and how desperate you are.

04/08/2022 lifestyle Comments Off on Wet, wet, wet: how to fix the trouble spots in our sodden homes
Recent Posts