Chad Michael Murray made a very special guest appearance on Tuesday’s episode of Just Between Us on Podcast One. The 37-year-old actor helped the show’s hosts Bailey Madison and Kaitlin Vilasuso surprise Alexandra Wilson, an 18-year-old One Tree Hill fan and three-time cancer survivor.

Wilson’s cancer battle started when she was diagnosed with stage-four neuroblastoma.

“I came through,” she recalled. “I had, like, two major tumors in my stomach. I don’t remember most of it, but it was a journey.”

She then entered remission but was diagnosed with Ewing’s Sarcoma, a form of cancer that grows in or around the bones, two years later.

“For a 7 year old to be diagnosed with Ewing Sarcoma was super rare,” she said.

Wilson said the cancer was in her clavicle, which doctors eventually had to remove. She then entered remission again at age 8 and was cancer free for a number of years. However, she did have a heart attack at age 16. Then, at age 17, she was diagnosed with neuroblastoma again.

“I went through another whole year of chemo and radiation, and here I am. I’m in remission,” she said.

During the interview, Wilson also listed a few of her favorite things and named Murray as her favorite actor. That’s when he walked in and gave Wilson the ultimate surprise.

“I lost it! I lost it!” Wilson said, who went on to say she watched One Tree Hill during her cancer battle and even got her grandma into the show.

After she shed a few happy tears and gave the Lucas Scott character a hug, Murray opened up about his own teenage hospital stay and how television helped him through that difficult time.

“When I was 15, I was in the hospital—nothing, I mean, even comparable,” he said. “I was there for about three months, and I became an actor because I wanted to create entertainment to keep people’s minds off it–to keep it in great places. And that’s what’s so beautiful.”

Murray said shows like Scooby Doo and The Simpsons helped him cope.

“I would sit in bed, and I remember how lonely I was,” he said. “And I’d just turn on the TV, and I’d just forget about everything that was going on for so long. I said, ‘That’s what I want to do. I want to be an actor someday so that I can give that to somebody else as a gift.’ So, you just brought everything full-circle to know that you were sitting there, and watching something that we put our heart and soul into. Thank you so much. That, like, warms my heart, beyond–you have no idea.” 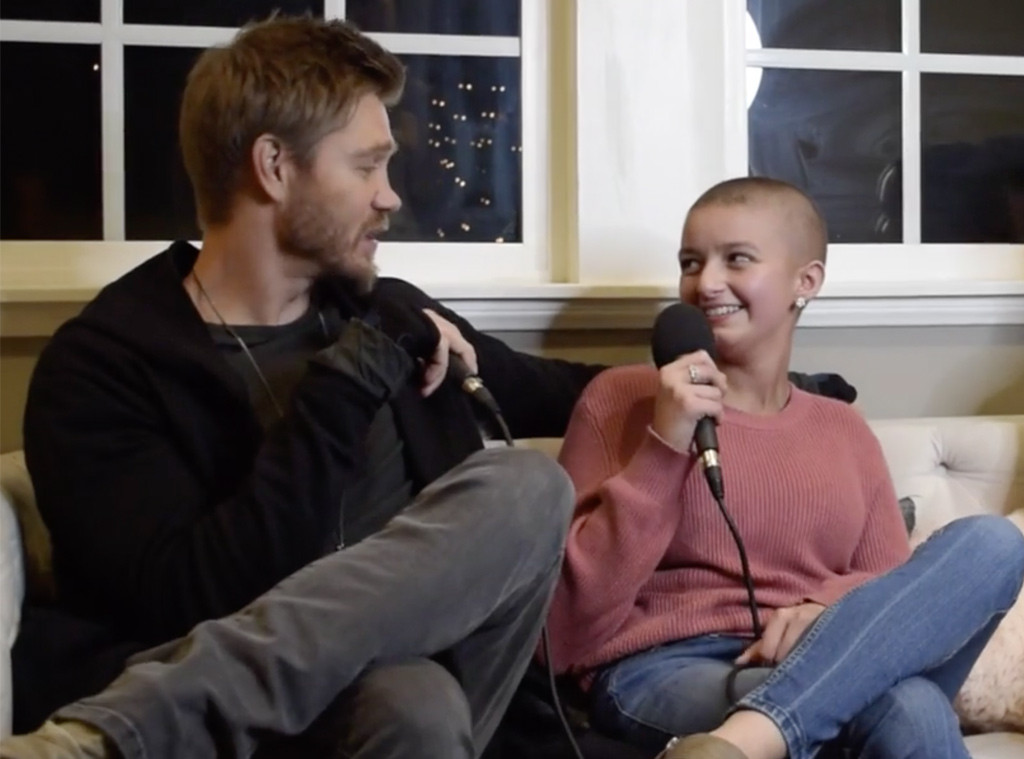 Just Between Us with Baily Madison and Kaitlin Vilasuso

Wilson opened up about the experience to E! News.

“Honestly, I never would’ve thought I’d have the opportunity to meet any celebrity. Chad is so down-to-earth and such a family man. I admire him so much,” she said. “It was crazy. I even cried a little bit when we walked in. When he shared his story of being hospitalized, it felt really good to make a connection with him. [It] made me feel like he was less of a celebrity, and more of a genuine person just like me.”

Wilson has now been in remission for two months and is enjoying her senior year of high school. Watch the video to see the emotional moment.