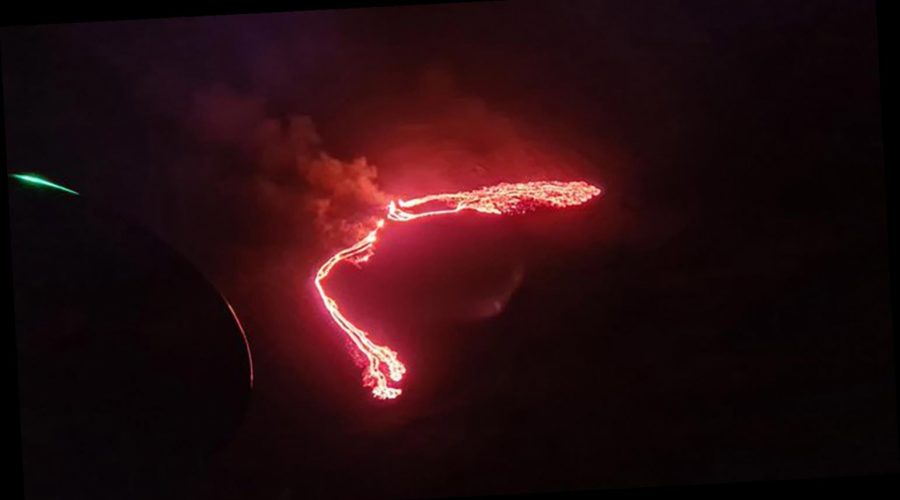 "There is little eruption activity in the area," the statement continued.

The National Commissioner Of The Icelandic Police, Department of Civil Protection and Emergency Management warned, "Volcanic gas pollution is expected to extend as far as Þorlákshöfn and to continue into the night."

"People are asked to close windows and stay indoors," the statement continued.

The National Commissioner added that scientists are currently working to determine how much sulfur dioxide was emitted due to the volcano.

The volcano eruption is also close to the Keflavik International Airport, which was briefly affected as a result.

"Please note that drone flying is prohibited over the eruption area at least until noon on March 20," The National Commissioner tweeted. "Due to scientific flights, flights and drones may have to be shut down at short notice in the near future."

The volcano erupted just a day after the IM Office reported there were 400 earthquakes in that area.

"This is somewhat less seismic activity in comparison to previous mornings where the numbers have been around 1,000 earthquakes," the outlet added.

Iceland's meteorological agency warned two weeks ago that this unusual uptick in large tremors could be enough to trigger an eruption from one of multiple nearby volcanoes. However, experts said an eruption "should not threaten inhabited areas of the peninsula."

At the beginning of March, the IM Office reported that more than 18,000 earthquakes happened in Reykjavik over the course of one week.

The largest was a 5.7-magnitude tremor on Feb. 24 around 10 a.m. local time. Another magnitude 5 quake hit just 30 minutes later, the agency said.

Residents in Reykjavik have been on edge since. RELATED: RELATED: Asteroid as Big as Golden Gate Bridge Will Fly Past Earth on First Full Day of Spring

"I have experienced earthquakes before, but never so many in a row," Reykjavik resident Auður Alfa Ólafsdóttir told CNN. "It is very unusual to feel the Earth shake 24 hours a day for a whole week. It makes you feel very small and powerless against nature."

Þorvaldur Þórðarson, a professor of volcanology at the University of Iceland, told the outlet it is understandable that residents were concerned about the recent uptick in seismic activity.

"Of course it worries people," he said. "For this region, this is actually fairly unusual, not because of the type of earthquakes or their intensity, but for their duration. It's been going for more than a week now."

Never miss a story — sign up for PEOPLE's free weekly newsletter to get the biggest news of the week delivered to your inbox every Friday.

He continued, "We are battling with the 'why' at the moment. Why is this happening? It is very likely that we have an intrusion of magma into the [Earth's] crust there. It has definitely moved closer to the surface, but we are trying to figure out if it's moving even closer to it."

Iceland sits along the mid-Atlantic Ridge, which is a set of tectonic plates that are continuously spreading apart from each other, according to the United States Geological Survey.

Most of the ridge is deep underwater and much of its seismic activity cannot be felt by humans, but earthquakes as strong as at least 6.9-magnitude have been felt in Iceland in the past.