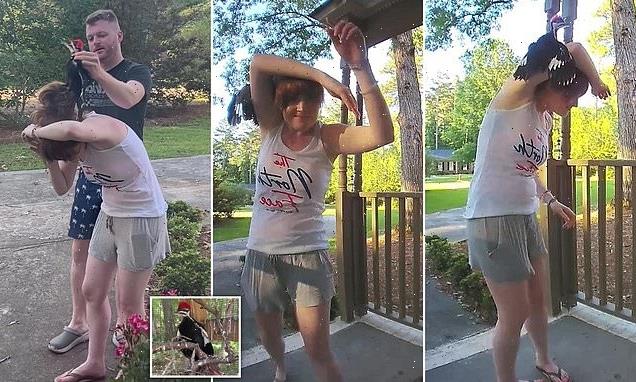 Better knock on wood! Woman who got a baby woodpecker tangled in her hair has a lucky escape after her brother disentangled him from her bun

A remarkable video shows how a woman who went outside and ended up with a baby woodpecker entangled in her hair ended up having to ring her own doorbell to ask her brother to remove the crying bird.

Brittany Bronson, 32, from Sanford, North Carolina, was relaxing at home when a baby bird flew into one of her windows and she went to check whether he was safe.

Amazing footage shows how the woodpecker hopped into Brittany’s head, and clung to her hair, leading her run to her doorbell and ask for help.

Her brother Colton, 27, came outside and, after asking ‘Why is that thing on your head?’, carefully untangled the animal before resting him down on the ground.

Brittany said: ‘I was lucky it was just a baby, because it wasn’t aggressive like an adult would be, I may have had some serious damage. He was in my hair for less than five minutes.

After going to check if a lone baby bird was ok, Brittany Bronson (pictured) ended up with the animal stuck in her hair – and had to ring her doorbell to ask her brother for help

Luckily for both the woodpecker and Brittany, her brother Colton (pictured) was on hand to remove the animal from her hair 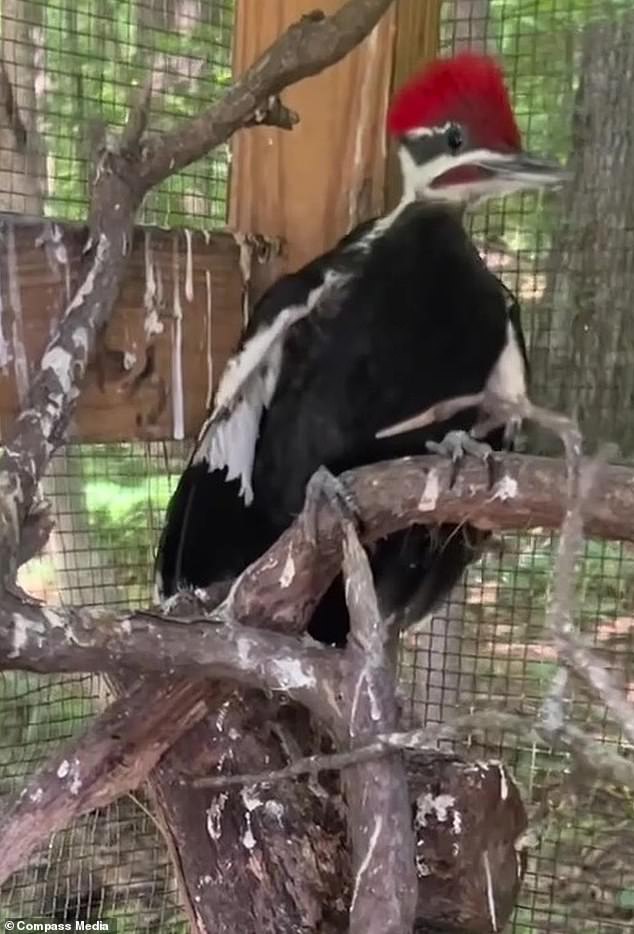 Following his hair raising adventure, the young woodpecker has now been taken in by an animal sanctuary

‘It was enough time for me to contemplate my life decisions on why I approached the bird, try to get it out myself, and then go to the front of the house to get proper help.

‘The woodpecker had flown into one of the sun porch windows and was clinging to the windowsill.

‘I ran outside to make sure he was okay since unfortunately we lose a lot of small birds who have done the same thing.

‘The sill was about eye level, so I walked up to inspect the bird and he half jumped, half flew onto the top of my head.’

Having made her way to the front door, Brittany calmly rang her doorbell while shouting Colton for help.

Brittany said: ‘Colton is a mechanical engineer and I attribute that to his professional bird removal skills.

‘He held the bird with one hand to try to keep it still and use the other hand to gently get his talons out of my hair.

‘The bird was really making a fuss after my brother got involved so it made it a little tricky and he kept putting one foot back in my hair after one would get free.

‘The bird had been pretty calm up until that point. I tried to get him out myself but couldn’t get his feet out of my bun.

Video footage shows Colton (pictured) removing the woodpecker from Brittany’s (pictured) hair, before placing the bird on the ground

‘I held the bird in place so he wasn’t pulling my bun down and ripping on my hair. People kept asking me how I was so calm and that was why.

‘The bird was incredibly calm at first and just happy to be on my head rather than clinging to the windowsill.’

Having removed the bird from her hair, Brittany and Colton researched what type of bird it was and found out it was a juvenile Pileated woodpecker.

Having learned it was only two months old, they decided the best option was to place it in a nearby tree so its parents could find it.

Brittany said: ‘We put him on a Dogwood tree and he hopped up to the top and we waited for mom and dad to come find him.

‘Instead, he took a snooze and didn’t make any noises to alert them. This continued until 10am the following day and that’s when I called wildlife rescues to get professional help. 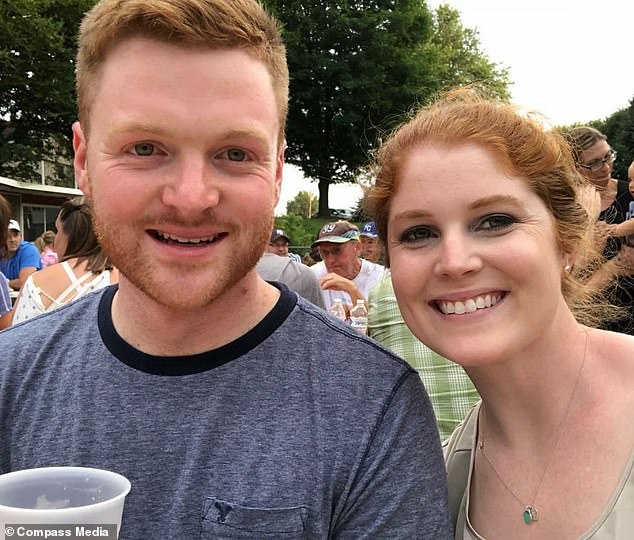 Brittany Bronson (pictured, right) was forced to rely on her younger brother Colton (pictured, left), after a woodpecker became stuck in her hair

‘They told me woodpeckers like this stay with the parents until fall and continue to get mouth fed, so without mom and dad, he wouldn’t make it.

‘I got in touch with Holly’s Nest Animal Rescue in Sanford, North Carolina, and they told me that if I could get him, I could bring him right over.

‘I got my cat carrier and a pole to get him out of the tree and before I could use the pole, he saw me approach the tree and just hopped off and free fell and hopped toward me.

‘I took him over and the rescue said I could continue to check in on him which was really sweet.’