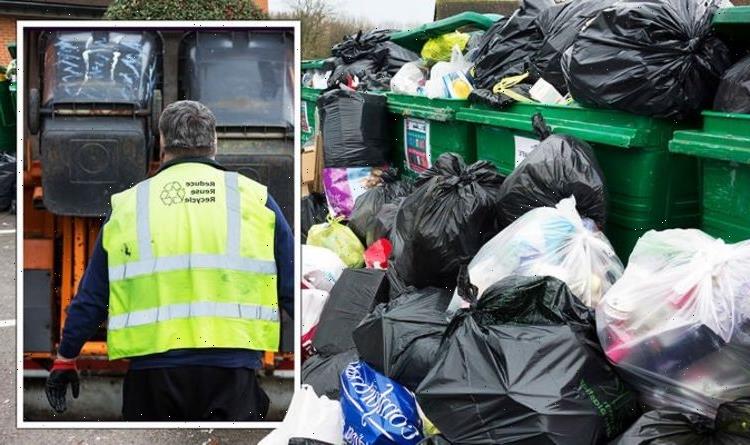 Local councils across the country have warned residents that they could see a delay in their waste being collected due to a shortage in bin lorry drivers. It comes after a Road Haulage Association (RHA) survey of its members estimates that there is now a shortage of more than 100,000 drivers in the UK, out of a pre-pandemic total of about 600,000.

The pandemic and Brexit related issues has caused there to be a huge shortage in HGV drivers.

This has affected supermarkets as well as fast-food chains such as McDonald’s and Nando’s.

Costa Coffee, Pizza Hut, Wetherspoon and Toby Carvery have all announced they are also suffering with supply chain issues.

Councils around the country have been telling residents that their waste will not be collected for quite some time.

Basildon Council notified its residents on Twitter about the situation.

The post read: “Pink sack recycling collections have been suspended in Billericay today because of high levels of sickness. Please take sacks in until further notice. We apologise for the inconvenience this may cause.”

Britons across the country have also complained that their local council has suspended bin collections due to driver shortages.

One person said: “This is getting ridiculous now, our bin can only fit three sacks in maximum.”

Another wrote: “They have suspended our local brown bin collections due to lorry shortage this week and next week, what on earth are we supposed to do?”

A third said: “I could fill my bin every single day, going to have to go to my local dump at this rate.”

“Didn’t realise we were facing a bin shortage nationally until mine weren’t collected this morning,” a fourth tweeted.

One resident who lives in the Wirral said: “Our council said there could be severe collection delays unless the lack of drivers is sorted as soon as possible.”

Nottingham, Manchester and Lancaster are amongst other cities facing a shortage in drivers.

Nottingham City Council has warned that garden waste and bulky waste are not always being collected on schedule due to its “thinly stretched crews”.

Buckinghamshire Council said it felt a pressure of a lack of drivers on its waste and refuse collection services.

The council’s leader Martin Tett (Con) told LGC: “We’ve got problems with waste collection because of the driver shortages.

“Everybody’s up in arms. Nobody connects what they read in the papers about HGV driver shortages and the fact there’s not enough people to drive their waste.

“Our drivers are getting headhunted in our area. We’ve got access to a massive project and it’s sucking people in at higher salaries. It’s a big problem for us.”

A Government spokesperson said: “We’re working closely with industry to address sector challenges, which are similarly being faced by other countries around the world.

“This includes plans to streamline the process for new drivers to gain their HGV licence and to increase the number of driving tests able to be conducted.

09/02/2021 lifestyle Comments Off on ‘Up in arms’: Local councils warn of ‘severe’ collection delays due to bin driver shortage
Recent Posts