The governor of Minnesota activated the National Guard Wednesday night to help quell unrest that broke out in downtown Minneapolis following what authorities said was misinformation about the suicide death of a Black homicide suspect.

“We once again see the unrest on our streets. And not just Minnesota but as a nation, this pain continues on,” Gov. Tim Walz said at a late night news conference.

Walz declared a peacetime emergency in Minneapolis and said he was mobilizing the Minnesota National Guard but didn’t say how many troops were being deployed. Minneapolis Mayor Jacob Frey imposed a curfew Wednesday night until 6 a.m. Thursday and requested National Guard help after people broke windows and stole merchandise from downtown stores.

“Minneapolis, it’s time to heal. We must rebuild and recover. Dangerous, unlawful behavior will not be tolerated,” the Democratic governor said in a statement.

Minneapolis Police Chief Medaria Arradondo dispelled rumors on social media about the death of the unidentified Black man suspected in a Wednesday afternoon homicide who later fatally shot himself on the Nicollet Mall as officers approached. The incident, which was captured on city surveillance video and released by police within 90 minutes, nonetheless sparked protests and looting in the heart of downtown.

The video confirmed the police account of what happened and showed the man glancing over his shoulder before pulling out the gun and firing, then collapsing to the ground as a half-dozen witnesses ran away with their hands in the air, according to the Star Tribune. The officers, one of whom had his gun drawn, shooed a remaining witness away and kicked the suspect’s gun away before performing chest compressions.

“This is not an officer-related incident,” Arradondo said. “We’re compounding more tragedy by the destruction and folks wanting to do harm to our communities in our downtown sector this evening.”

“This is my city. We will not tolerate that,” he continued.

A large crowd began to gather near the shooting scene within an hour, and some began to break windows at nearby businesses, reports CBS Minnesota.

The station said people rushed into the Target store at the corner of 9th Street and Nicollet Mall to loot it, but police quickly rushed in to control the crowd. The store closed soon after. 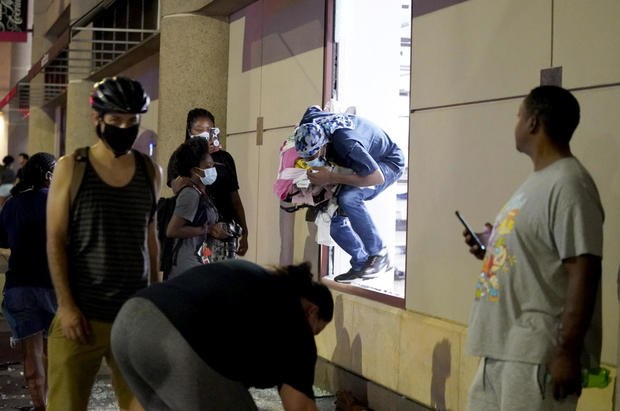 By 9 p.m., the looting had spread to a couple of blocks south of the mall to a strip mall, and there were reports of smash-and-grabs spreading west, CBS Minnesota said.

Minnesota Corrections Commissioner Paul Schnell said fireworks were being set off and bottles thrown late Wednesday, and there were reports of gunshots.

Police were making arrests and trying to clear downtown, Schnell told reporters. The number of arrests wouldn’t be available until Thursday morning, Minneapolis police spokesman John Elder said. One officer was hospitalized with a serious injury that was not life-threatening, Elder said.

Minneapolis was rocked by protests that turned violent after George Floyd, a handcuffed Black man, died after a white police officer pressed his knee against Floyd’s neck for nearly eight minutes on May 25. Floyd’s death sparked protests worldwide. Demonstrators also have gathered in downtown Minneapolis this week to protest after Jacob Blake, a Black man, was shot multiple times by police in Wisconsin on Sunday, leaving him paralyzed.

In Minneapolis, Floyd’s death set off several nights of violence, including the burning of a Minneapolis police precinct office, until Walz activated the National Guard. South Minneapolis, where Floyd was arrested, and North Minneapolis saw the brunt of vandalism, but downtown Minneapolis was largely spared.

The Minnesota State Patrol mobilized about 150 troopers and all available metro area state troopers Wednesday in response to the unrest in Minneapolis, Walz said.

“This is part of a larger narrative. It was the flash point of George Floyd, it has spread across this nation. It does us no good to try and either divide or ignore or to make it worse or to blame someone. We’re just, as a state and as a nation, going to have to come together and figure out what our next steps are,” Walz told reporters.

Frey said during a news conference Wednesday night that he and Walz had been in contact to address the unrest. Frey said bolstering enforcement was an effort to “stay ahead of the game as much as possible.”

08/27/2020 lifestyle Comments Off on Unrest hits Minneapolis after mistaken reports of police shooting Black man who actually shot himself
Recent Posts
We and our partners use cookies on this site to improve our service, perform analytics, personalize advertising, measure advertising performance, and remember website preferences.Ok