It happens all too frequently – often at Halloween, but not exclusively – as in 2016, when two white teenage girls in Maplewood, N.J., posted a photo of themselves online in blackface. One student told a reporter, “They thought it was a joke, but it really just was not funny at all.”

One of the girls’ mother said, “The two girls had no idea of what blackface was, or the history of it.”

The history of blackface is long and complex, and deeply ingrained in our culture – in vaudeville and minstrel shows and in movies. Even Bugs Bunny and Elmer Fudd blacked up.

For more than a hundred years, white (and then black) performers wore dark makeup, creating not only a popular theatrical form, but stereotypes that are still with us today.

Eric Lott, a professor at the Graduate Center of the City University of New York, admitted that blackface makes him uncomfortable. “It does make me feel uncomfortable to talk about these things because they are incredibly disturbing, and revolting,” he told WCBS anchor Maurice DuBois.

“They are afraid of black groups, mobs rising up and taking the power,” Lott replied.

Minstrel shows began in the 1830s, and white performers used burnt cork, or later black greasepaint. Minstrelsy eventually became the most popular form of entertainment in the country.

Margo Jefferson, the Pulitzer Prize-winning critic, examined some images of minstrel shows from the New York Public Library. “The shininess of the black against the big white clown’s mouth, the hat, the over-long tailcoat … mocking. It always gives me the jolt that racist history does.  Blackface is so tied to comedy, to people enjoying themselves, to people having fun, that that rattles you still more.”

White minstrel performers claimed what they did on stage was based on their perceptions of how black people lived.

“Some of this came out of a genuine fascination with the music, the songs, the dances, the performance styles of black people,” Jefferson said.

But it’s also where “Jump Jim Crow” was born, along with other characters depicted as lazy, lying or buffoonish – all happening before the Civil War. “Slavery was all about creating visions, types, stereotypes of an entire race of people as sub-human in every way,” said Jefferson.

By the 1860s, African-Americans began using blackface onstage themselves.

DuBois asked, “Why on Earth would a black performer put on blackface and demean him or herself?”

Jefferson replied, “Look, this is the 19th century. They had limited options. They were expected to.”

Why? “Because it made the audiences comfortable. You can be fascinated, you can be excited. But you can always feel superior.”

In effect, the black makeup on a black performer became a theatrical mask, with many layers of meaning.  According to professor Lott, “The mask, I think, says to white audiences, ‘You have nothing to fear. Go ahead, enjoy yourself.’ To black audiences I think any number of things might have been communicated, like, ‘Can you believe that these people are making me put on this mask so they will be entertained?’ You know, in other words, there’s a kind of winking to the black audience. But it gave black performers access to the stage.”

One of the biggest black stars to come out of the minstrel tradition was Bert Williams, who wore blackface from vaudeville to Broadway. 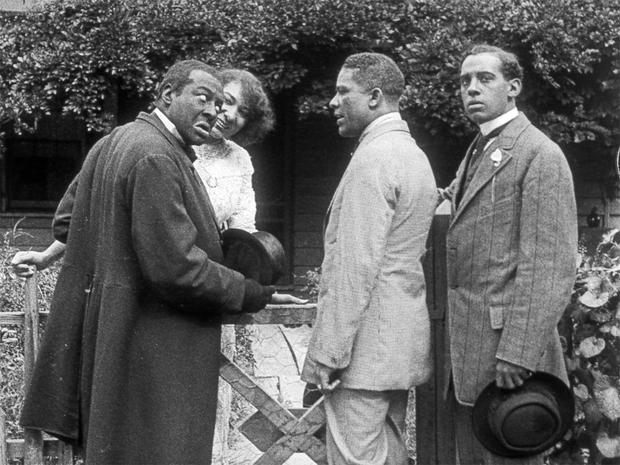 “It’s clear that he was a genius of a performer,” said Jefferson.

“But how did he reconcile performing in this demeaning art form?” asked DuBois.

“He was very melancholy about it. He knew it was necessary for his career, as all other black performers knew it.”

Minstrelsy on stage basically died out in the 1920s. But blackface lived on in the movies.

In 1927, Al Jolson starred in the pioneering talking picture “The Jazz Singer,” playing a young man who prefers singing popular music rather than his family’s traditional Hebrew prayers.

In the “Our Gang” comedies of the 1930s, Spanky appeared in blackface. “The gag here is that the gang doesn’t realize that that’s Spanky in blackface until they actually see Buckwheat,” said Lott. “So, the gist of it is that you put blackface makeup on anyone and they become black. And it’s supposed to be really funny.”

And it goes on: during the Golden Age of the Hollywood musical, Judy Garland (in “Babes on Broadway”), Bing Crosby (“Holiday Inn”), Fred Astaire (“Swing Time”) and many others all blacked-up. 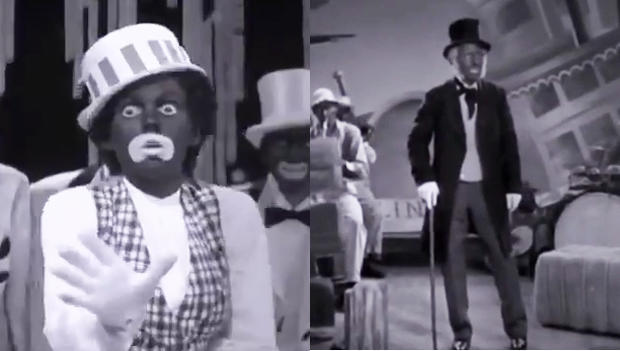 It’s still in the culture.

DuBois asked Margo Jefferson, “You know, some people say in order to move forward, we need to put this stuff behind us, as painful, as just upsetting that it may be.”

“Well, you know, any form of history that gets suppressed or repressed or erased out, it comes back to haunt,” she replied. “What has to happen now is a discussion, an acknowledgement of this charged, complicated, painful history.”