Mosquito numbers in NSW have exploded and will rise further as summer approaches after a year of widespread flooding across the state.

The tiny insects thrive in waterlogged areas, laying their eggs on the surface of the water, which means recent flooding has seen their number rise significantly. 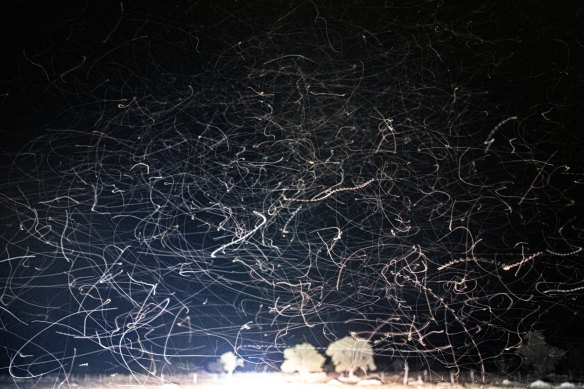 Mosquitoes and moths in headlights near the Macquarie Marshes north-west of Dubbo.Credit:Nick Moir

Farmer Nicole Fragar, who lives near Tottenham in the Central West, said she saw kangaroos rolling around in the dirt and mud of her property in an apparent attempt to combat the booming numbers of mosquitoes.

“I don’t know if they were trying to coat themselves in mud, but the kangaroos were finding hard patches on the ground and trying to roll,” she said.

Fragar shared video footage of her backyard being swarmed with mosquitoes last month and said it was the worst her family had seen in more than three decades on the land, and that young cows were especially vulnerable.

“The calves really cop it,” she said. “We lost one and our neighbours were saying theirs were lethargic. My dad’s lived here for more than 30 years and hasn’t seen mosquitoes like this before.”

Dr Cameron Webb, a clinical lecturer at the University of Sydney, has been monitoring mosquito populations and says there’s been a substantial increase in numbers recently.

“In the space of a number of weeks we’ve gone from fighting dozens of mosquitoes to thousands and, in some cases, tens of thousands,” he said.

“Flooding brings lots of water to the environment and as soon as it starts to recede into stagnant pools, ponds and wetlands, that’s when the mosquitoes will really take advantage of it.”

Webb said it’s not just flooded regional areas that can expect an increase in mosquito numbers, as populations also rise when warm weather accompanies more water on the ground.

“We’re going to see the most significant rises in mosquito populations across those flooded areas of inland New South Wales, but we will start to see it around the coast and particularly around Sydney, too, over the weeks and months ahead,” Webb said.

“As floodwaters recede and the weather continues to warm as we get towards summer, unfortunately, the conditions will be even better for mosquitoes.”

Those in regional areas have also been shocked by the size of the mosquitoes, which Webb said also reflected his observations.

Mosquitoes on a glass window, drawn to light at a nature retreat in the Macquarie Marshes.Credit:Nick Moir

“The mosquitoes we see in spring after flooding are typically larger, up to twice the size of the average ‘backyard mozzie’,” he said.

Storm chaser and photographer Diane Harris crossed the border from Victoria to photograph the Murray River on Sunday and said she was “eaten alive” while working. 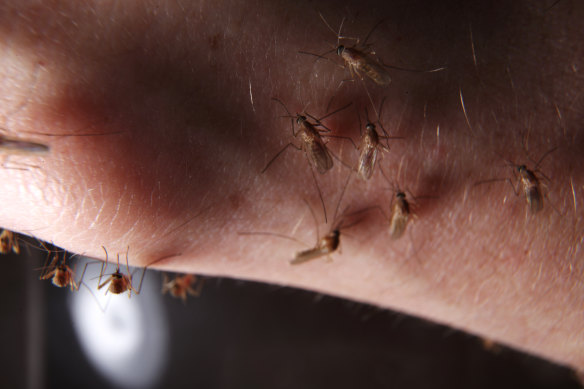 Mosquito numbers have increased as a result of water brought by floods and warming weather.Credit:Nick Moir

“As soon as we hopped out of our car they were all over our faces,” she said. “They were on our eyes, our nose, they got into our clothes, and we had to pull them out of our hair. You looked into puddles and mosquitoes were all you saw.”

Mosquitoes can transmit diseases to humans, including Japanese encephalitis and the Ross River virus.

NSW Health has issued advice for people to minimise their risk of being bitten, which includes: reducing the amount of exposed skin; applying insect repellent and; being aware of peak risk times for mosquito bites including dawn, dusk and early evening.

11/17/2022 lifestyle Comments Off on ‘Twice the size’ and more of them: mosquito numbers on the rise
Recent Posts